Kenya Airways (-0.6%) management will seek dialogue with workers over their new demands on a return-to-work formula signed previously, to avoid a planned strike on 13-Oct-2010.

Aviation and Allied Workers Union issued (05-Oct-2010) a seven-day strike notice over the pay dispute, demanding the salary rise to be back-dated by 15 months, which would cost USD4 million (KES325 million) above the initial amount of USD1.6 million (KES129 million) if it were implemented from Oct-2009.

Meanwhile, Lonrho’s shares rose by +16.3% due to non-aviation related matters regarding the company’s fund managers.

Middle East shares were mostly on the downturn with Royal Jordanian (-4.6%) and Kuwait National Airways (-1.2%) down while Air Arabia (+0.4%) shares gained slightly. 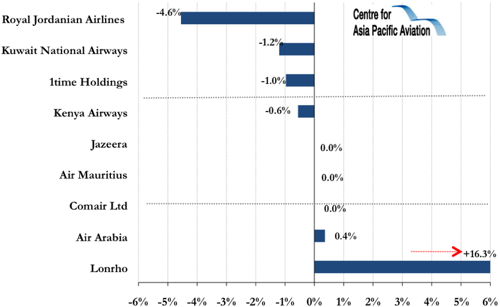