Kuwait National Airways was flat. Subsidiary, Wataniya Airways confirmed plans over the weekend to introduce three A320 aircraft to its current fleet of four A320s this year. Each aircraft will be configured with 122 seats, compared with the 145 that a number of leading European airlines use in their A320s, ensuring additional leg room throughout its First-class and Premium Economy cabins.

In Africa, 1time (+4.8%) made the day’s biggest gain, despite a 0.8% decline in the South African JSE All Share Index, pushed lower by banking stocks. Comair was flat.

Kenya Airways (+2.1%) also climbed, moving higher with the Kenya All Share Index (+1.0%), after analysts stated Kenya shares are expected to be rise this week on demand from institutional investors, according to Reuters. Lonrho (-2.0%) was meanwhile down. 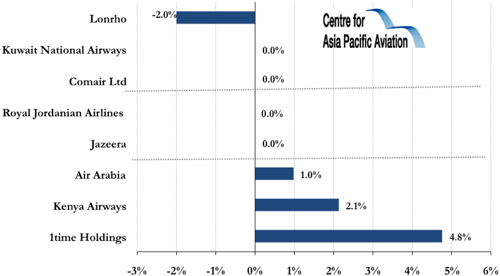