China's Juneyao Airlines is continuing the progressive international expansion it commenced in 2012, further diluting its mainland domestic market service (excluding "regional" services to Hong Kong and Macau). Thailand is so far a focus, with the country's leisure nature appealing to the privately-owned, and all-A320 family, operator's target market, of consumers in the high-income Shanghai area seeking a boutique service for leisure needs. Juneyao's 158-seat A320s have 150 economy and eight first class seats. The carrier also sees corporate traffic, but downplays this so as to avoid conflict with the state-owned carriers which receive preference on international routes.

Juneyao had considered services to Japan's resort island of Okinawa, but this has fallen out of favour due to political tensions between China and Japan. Chinese carriers are turning their attention to Southeast Asia as they seek new markets, and the region offers year-round pleasant weather. Juneyao is also expanding in South Korea and is considering a presence in Singapore. Juneyao hopes these services will raise its international profile and attract potential partners to work on international routes or feed passengers onto Juneyao's domestic network based around Shanghai. Juneyao is the 13th largest domestic carrier in China and has a fleet of 29 A320s, of comparable size to Virgin America, which has been able to attract international partners.

Juneyao's first international (non-Hong Kong/Macau) scheduled service was to Phuket, inaugurated on 09-Nov-2012 with four weekly flights from Shanghai Pudong. By April-2013 Juneyao will increase this to a daily offering. Juneyao is the second and only other carrier after Shanghai Airlines in the market and will have a 33% share of capacity. 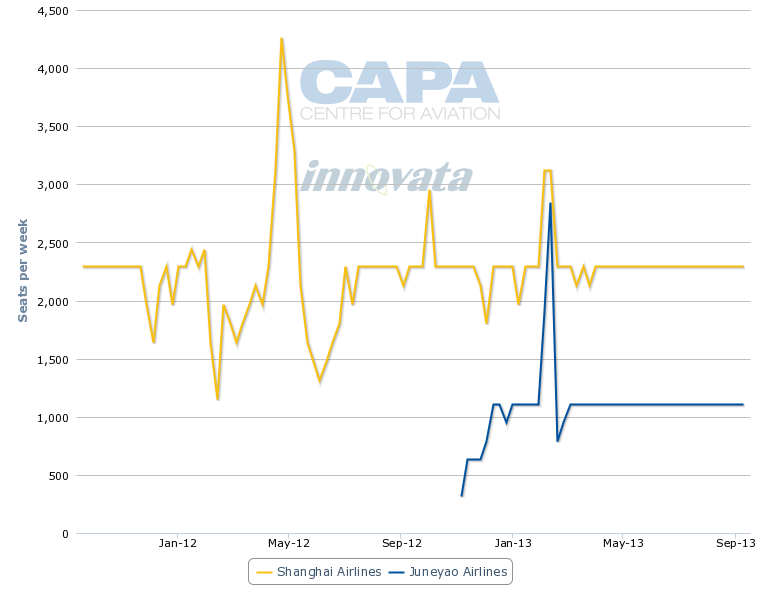 Bangkok, also served from Shanghai Pudong, will increase to a double daily service. Juneyao will become the fourth largest carrier in this market with a 13% share of capacity. Spring Airlines on 31-Mar-2013 commenced double daily services between Bangkok and Shanghai Pudong, and from 29-Apr-2013 will introduce a third frequency three days a week, bringing weekly round-trips to 17. While Juneyao positions itself as a boutique premium carrier and Spring a low-cost carrier, all Chinese carriers compete for relatively the same pool of traffic since growth is carefully managed by the Chinese government. Spring has not branched out to serve out Thai cities. 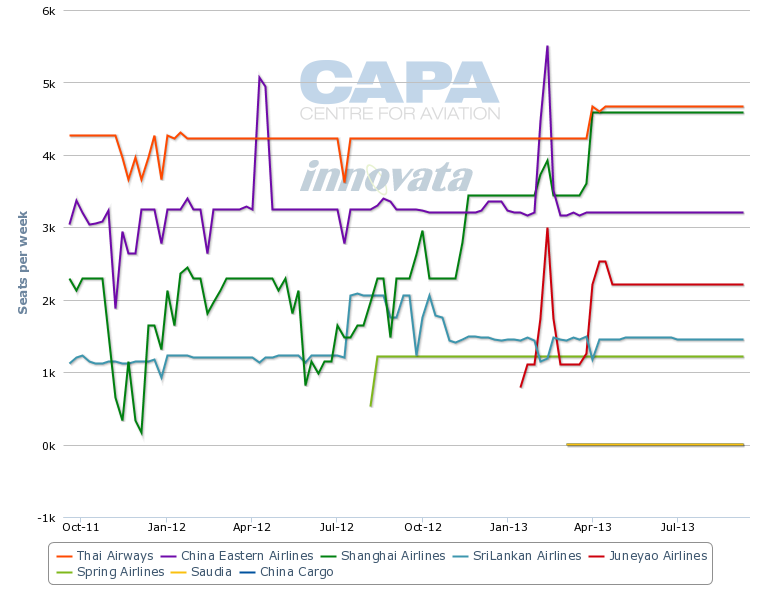 Juneyao intends to launch service to its third destination in Thailand, Chiang Mai, on 03-Apr-2013 with an initial twice-weekly service. It will be the only carrier in this market.

Juneyao achieves a high aircraft utilisation rate on its Thailand services, with many flights departing Shanghai in the late evening, arriving into Thailand very early the following morning, departing shortly thereafter and arriving back into China in the morning for a full day's work in the domestic market.

China has yet to permit red-eye and back-of-the-clock services, stunting growth for carriers (notably Spring, which has been vocal about the restriction) that would like to increase their utilisation and are confident of offering lower fares for the more inconvenient services.

In the larger Shanghai-Thailand scheduled market, Juneyao will have a 17% share. 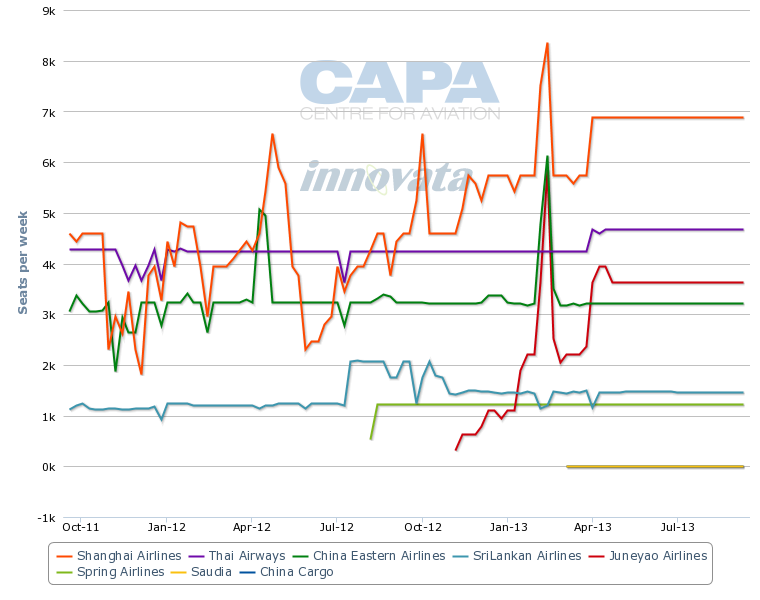 And in the even larger China-Thailand scheduled market, Juneyao will have just under a 5% share. The largest share is held by Thai Airways with 23% and then China Eastern with 21%. 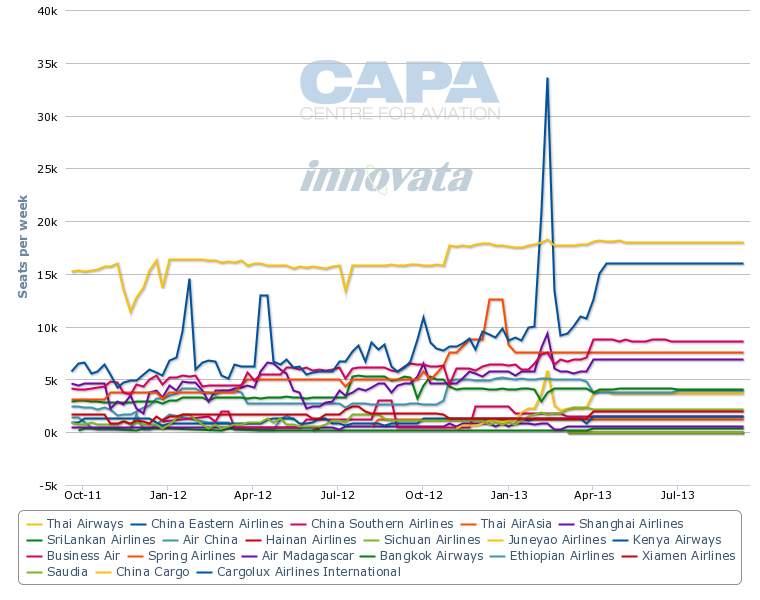 So Juneyao is a minor player, but is well established in its home of Shanghai, the only city from which it has launched international services. Juneyao has also hardly branched outside of Shanghai for other domestic bases, reflecting its belief in the Shanghai market's opportunities and how its model is tied to wealthy areas. 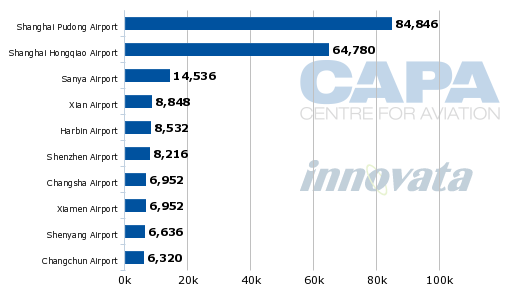 Achieving a 17% share of the market in under six months reflects Juneyao's potential if and when regulatory hurdles are lifted: China tightly controls international routes as well as aircraft imports, stunting growth for efficient carriers like Juneyao, which is able to draw on demand in the Shanghai market. Juneyao is the third largest carrier at Shanghai Pudong and sixth largest at Shanghai Hongqiao airports. 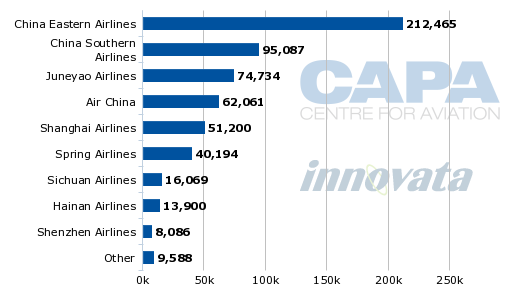 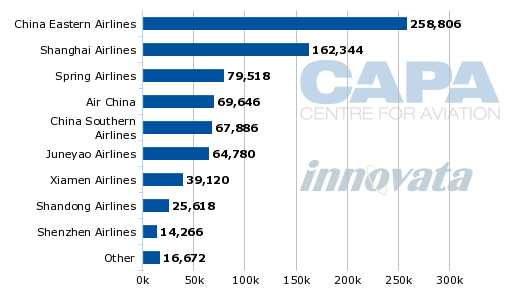 SriLankan Airlines has done a tidy job cleaning up the Thailand-China market as a fifth freedom operator, and is looking to grow its presence. A number of Thai charter carriers, with unscheduled services, are also prominent in the market. As CAPA previously wrote:

SriLankan currently serves Beijing and Shanghai with five weekly flights via Bangkok while Guangzhou is served with four weekly flights via Bangkok, and Tokyo is served with four weekly non-stop frequencies. Mr Chandrasena says SriLankan eventually would like to offer non-stop flights to its Chinese destinations but for the short to medium term the focus would be “to scale up China” by adding frequencies on the existing routings.

Sri Lanka’s tourism ministry reported less than 26,000 tourist arrivals from China in 2012 (see background information). This represented 58% growth over 2011, showing the potential of the China-Sri Lanka market but does not provide a big enough base to support regular non-stop services.

The Thailand-China market, like other international markets to China, is heavily Chinese. Thai AirAsia said in Nov-2012 that its services from Bangkok to Chongqing and Wuhan consist of 80-90% Chinese passengers. Thai AirAsia is looking to diversify its passenger mix, with director of commercial operations Santisuk Klongchaiya saying: “We don't want to become overly dependent on Chinese passengers. The airline is attempting to find a good combination of Chinese and non-Chinese passengers for future routes to mitigate risk.” Juneyao has also reported upwards of 90% of its passengers are Chinese and it too is seeking to diversify its passenger mix, but it will likely have a harder time as its brand is not as well known outside of China.

By Apr-2013 Juneyao will also add to its Hong Kong and Macau services, increasing each from a daily to double daily offering. In Hong Kong in particular this will give a much-needed frequency boost as other carriers have multiple daily services. Spring Airlines serves Hong Kong three times a day and the combined Cathay Pacific/Dragonair network has over a dozen flights a day.

The increase will see Juneyao's share of the market rise from 2.5% to 4%, making it the smallest independent carrier (Shanghai Airlines has less capacity than Juneyao Airlines, but is part of China Eastern). The new service sees an afternoon departure from Shanghai and an evening departure from Hong Kong. 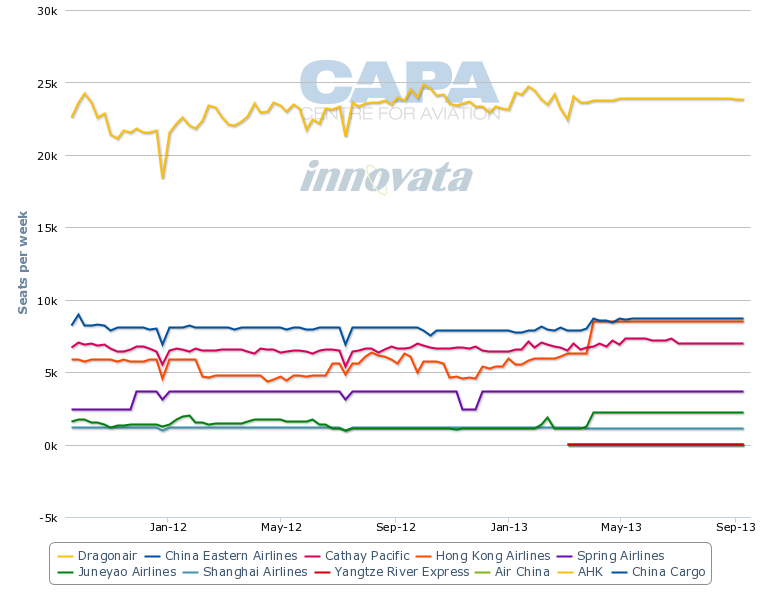 In the heavily casino-oriented market of Macau, Juneyao's capacity share will increase from 14% to 25%. The new service departs Shanghai in the morning and Macau in the early afternoon. 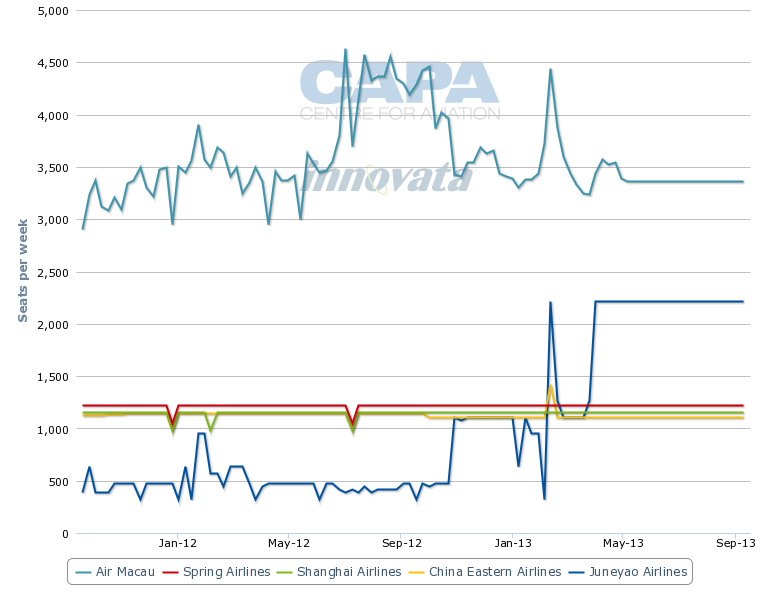 Expansion to Singapore also being considered

Juenyao is also considering a daily service to Singapore, which would make it only the third passenger carrier in the market. 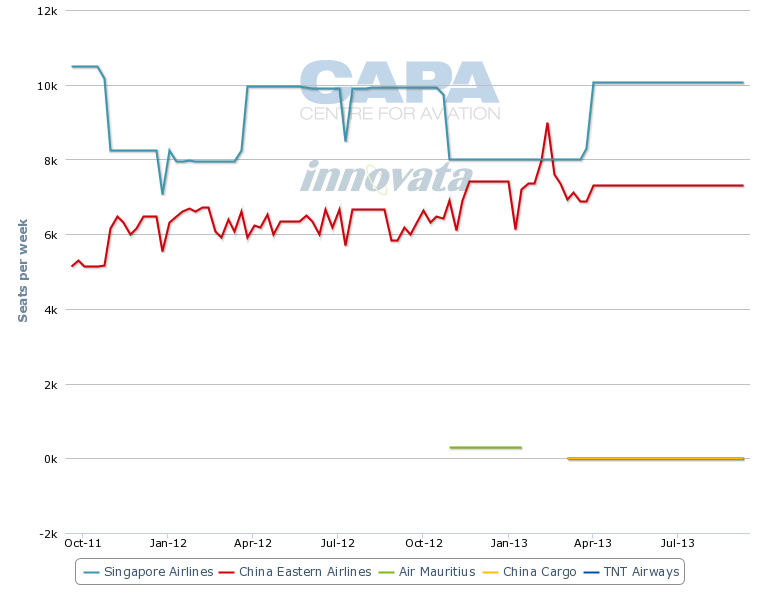 Seoul Incheon service would add to Jeju in South Korea

Juneyao is also considering serving Seoul Incheon, making it the carrier's second scheduled service in North Asia (again excluding Hong Kong and Macau) after Jeju. Juneyao in Jan-2013 said it may launch Seoul before Singapore, and was considering a Mar-2013 or Apr-2013 timeframe, although this has now likely been pushed back. 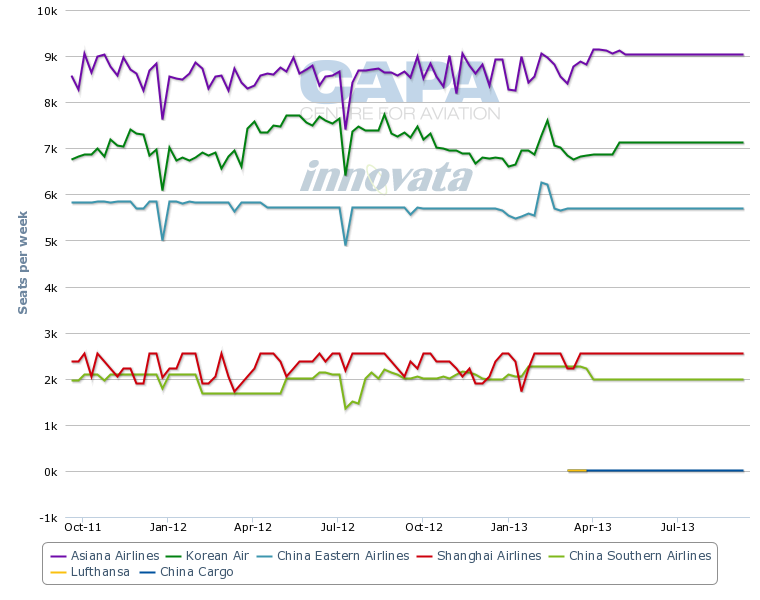 Juneyao plans to launch daily Shanghai Pudong-Jeju service on 08-Apr-2013, making it the third carrier on the route. Jeju is Korea's main island getaway. Juneyao would be the smallest of the three operators, but just slightly behind Korean LCC Jin Air. 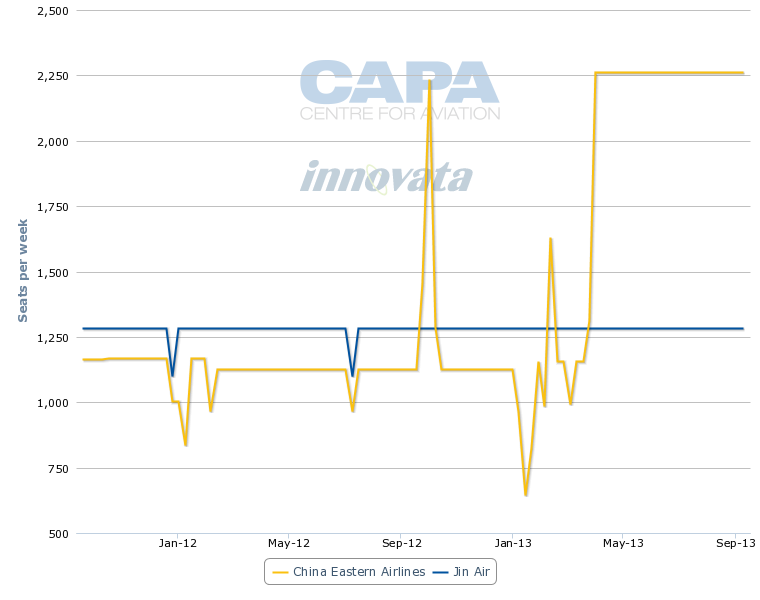 Juneyao's growth and fleet up-gauging continues as it seeks partners

Despite the international initiatives, Juneyao's core market remains domestic and the carrier continues its focus there. On 31-Mar-2013 it will launch seven new domestic routes, all outside of Shanghai, based on Wenzhou and Hangzhou (although Hangzhou is only about 90 minutes away on high speed rail, creating some overlap in catchments):

The carrier in Feb-2013 began minor fleet changes as it retired its two A319s (sent to Russia's Rossiya) as it seeks to up-gauge its fleet, taking A320s as well as A321s, which offer growth in absence of slots at China's congested airports, including its home of Shanghai. The carrier has not ruled out even larger aircraft like the A330 for the long term.

Despite a fleet on a par with Spring Airlines, China's only low-cost carrier and also based at Shanghai, Juneyao carries less traffic than Spring, a combination of utilisation rates as well as Juneyao having a lower seating density than Spring. Juneyao closed 2012 with 5.3 million passengers to Spring's 9.1 million. 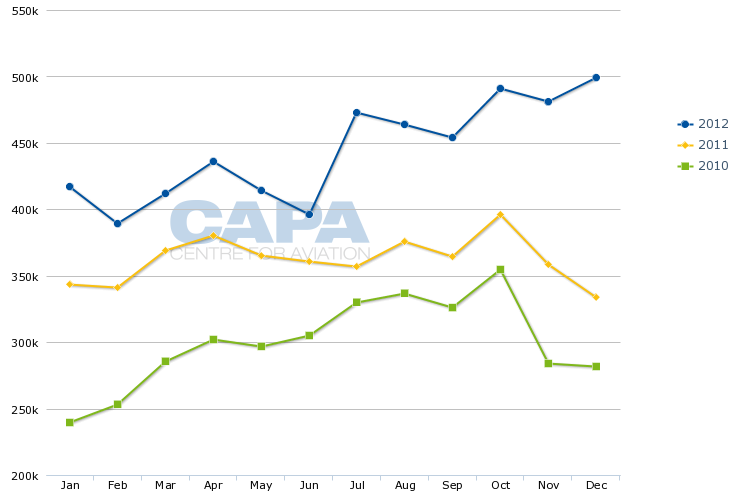 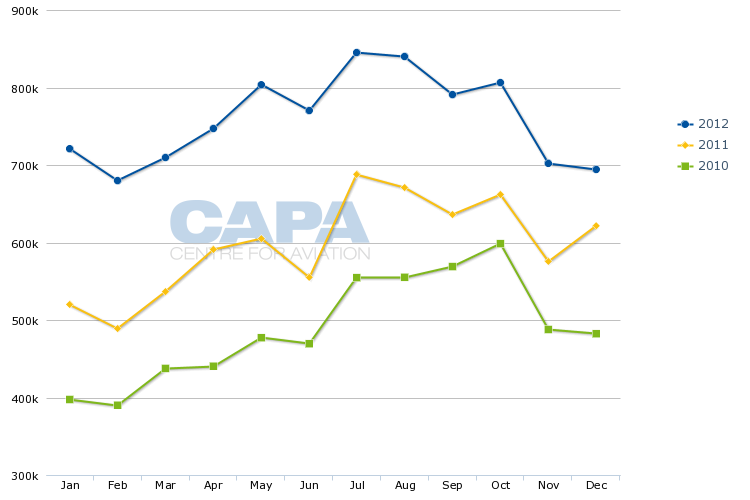 Juneyao has reported an undisclosed profit for 2012, its sixth consecutive one, with an average load factor of 85%. It has submitted an IPO application to the Shanghai stock exchange.

Juneyao will look to continue to grow organically through adding capacity, but this is always subject to aircraft importations and slot restrictions. So the carrier is also considering smart growth via partnerships, leveraging its valuable position at one of China's major value gateways. It is open to a range of collaboration, from joint marketing to interline to codeshare, and awaits its first partner to capitalise on its Shanghai base. There should be no shortage of suitors.