In 2010 the Star Alliance lost its member in China's financial heart – Shanghai Airlines – when SkyTeam member-elect China Eastern merged with Shanghai Airlines. Privately owned Juneyao Airlines is based in Shanghai and plans to decide by the end of 2016 whether to join a global alliance. Partnerships could add impetus to Juneyao's nascent plans to fly long haul by the end of the decade.

Any decision to join an alliance would almost certainly result in Juneyao selecting Star. Star presents the greatest opportunity for Juneyao to receive connecting passengers. Long haul Star capacity into Shanghai Pudong is larger than the combined capacity from oneworld and unaligned airlines (and some of them, like Qantas, are cosying up to China Eastern). Juneyao is ruling out being in the same alliance as China Eastern, which is currently SkyTeam (and perhaps in the future – oneworld). Juneyao's network is complementary to existing Star members Shenzhen Airlines and Air China and the airline codeshares with Air China, which for a few years has wanted Juneyao to join Star.

Juneyao and Star would benefit, but alliance membership is also a competitive ploy from Air China against China Eastern. Juneyao in Star would further enhance Air China's presence in Shanghai, adding to its group presence in other mainland Chinese cities: Beijing, Chengdu and Shenzhen. Other than the mainland, in Hong Kong Star Alliance's Air China owns part of oneworld's Cathay Pacific, while in Taiwan EVA is a member of Star.

At Shanghai Pudong, Juneyao is third largest airline and the largest non-SkyTeam airline

Juneyao first flew in 2006, which would make it the youngest member of a global alliance, and is primarily a domestic airline. In Mar-2016 Juneyao will operate 187 daily domestic fights compared with 37 international/regional flights. International capacity is mostly to Northeast Asia, carrying outbound Chinese tourists. 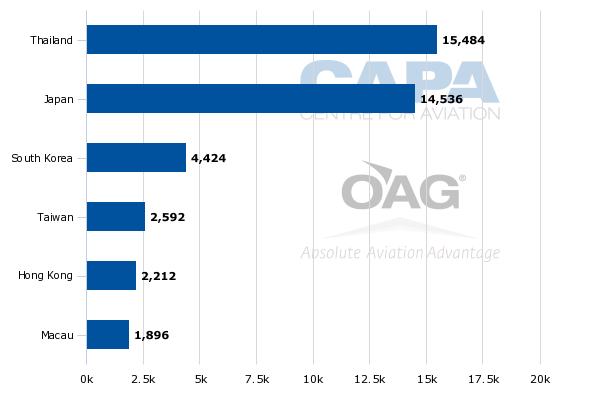 76% of Juneyao's domestic seat capacity is to/from Shanghai and like others it has a split presence there, operating out of (primarily) domestic Shanghai Hongqiao and (mainly) international Shanghai Pudong. Juneyao's domestic presence in Pudong is larger than in Hongqiao, according to OAG data.

Normally this would be a disadvantage since Hongqiao is typically the preferred airport for Shanghai, being closer to the downtown core. Hongqiao is also attached to a large railway station that enables easy intermodal High Speed Rail connections.

Other airports where the airline has a notable presence are smaller, and unlikely any time soon to be major transfer points for potential alliance partners. 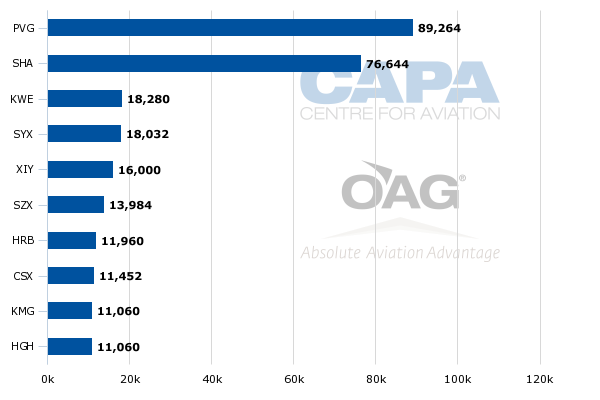 Juneyao and Spring: Juneyao has experience with LCCs and Spring considers partnerships

Juneyao positions itself as a full service airline. It is sometimes mistakenly characterised as an LCC like Spring Airlines, which was launched in China's post-2000 aviation reforms as well, and is also based in Shanghai. In 2015 the first services of Juneyao's LCC subsidiary, 9 Air, were launched. The LCC does not fly into Juneyao's Shanghai hub, operating instead from Guangzhou, and there are no codeshares or interlines. Management of 9 Air comes from Juneyao, but the airlines use different IT platforms.

Spring Airlines has received interest from foreign airlines expecting to benefit from connection with onward Spring flights and the airline has been considering a partnership strategy for a few years. It has yet to implement it, largely due to the IT changes that would be needed.

Juneyao's alliance decision would need IT changes but it does have some experience, since it already codeshares and interlines. However, IT upgrades for alliance membership are typically more involved than the IT changes required for simple partnerships along the lines that Spring has envisaged. Further, Spring is larger in Hongqiao than Pudong, whereas that situation is reversed for Juneyao. 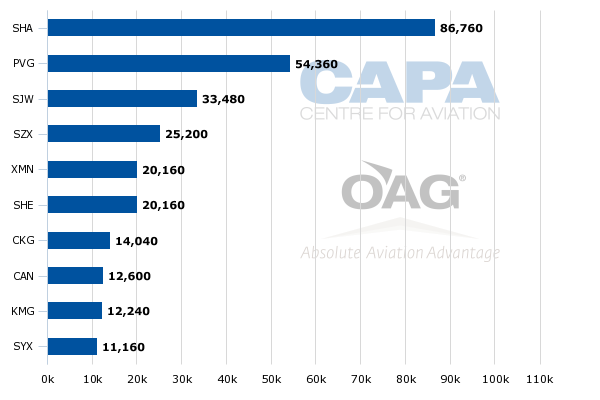 Juneyao is unique in being a major Shanghai airline that has a larger presence in Pudong than in Hongqiao. Pudong International Airport accommodates most of Shanghai's international traffic and Chinese airlines partnering from Pudong would welcome new passenger flows. Pudong services typically have lower yields than Hongqiao, as demand for the more remote airport is lower.

By contrast, the limited number of international flights into Hongqiao are all short haul and mostly point-to-point. Being closer to more of central Shanghai and a hub for rail and bus journeys to around the area, Hongqiao's airline yields are consequently generally higher. As a consequence, there is less need to fill up with long haul traffic, with its lower yields. 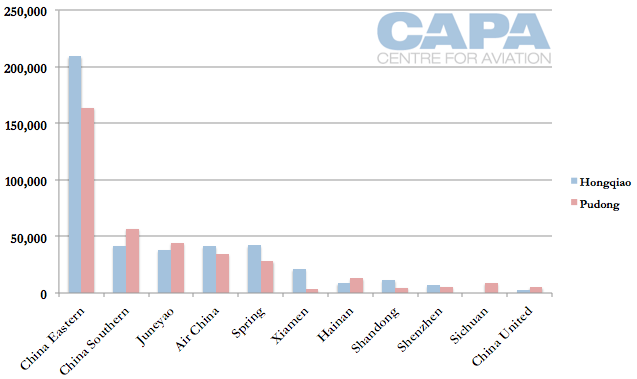 Juneyao is larger than Air China at Pudong, but Air China is slightly larger than Juneyao at Hongqiao. From Pudong, Juneyao offers 28 domestic destinations against Air China/Shenzhen Airlines' combined 37.

All of Juneyao's Pudong destinations are served by Air China or Shenzhen Airlines, according to OAG data. Even where they may overlap on destinations, Juneyao would provide overall frequency thickness. (The additional destinations shown served by China Eastern are mainly smaller markets.)

Juneyao's alliance decision will be guided by strategy – and Air China

Juneyao Chairman Wang Junjin told Bloomberg that Juneyao will decide by the end of 2016 whether or not to join a global alliance. Juneyao has ruled out joining an alliance that already has a presence in Shanghai. China Eastern and wholly-owned Shanghai Airlines are the only local Shanghai airlines that are members of an alliance: SkyTeam.

However, China Eastern has been weighing a decision to leave SkyTeam and instead join oneworld. China Eastern has growing oneworld relationships: JAL (historical), Qantas (new) and British Airways (perhaps to come). China Eastern has expressed dissatisfaction with some of its SkyTeam members, believing that there is too much competitive overlap, whereas oneworld would be more welcoming and less competitive.

(This would be less than welcome news to SkyTeam leader Delta, which invested nearly half a billion dollars in 2015 to buy 3.6% of China Eastern, ""solidifying" its partnership with the Chinese airline. oneworld is however a relatively loose alliance; Qatar Airways is for example a member, while Qantas has an extensive JV with Emirates.

Whatever China Eastern decides, Juneyao remains a strong fit with Star for strategic reasons, and because Air China wants Juneyao in its fold.

Juneyao accounts for 9% of domestic seat capacity at Hongqiao and 12% at Pudong. The addition of Juneyao to Star would give the alliance a comparable domestic capacity share as in Guangzhou, where there is no locally based Star member (but Air China and Shenzhen Airlines have a large presence). Star's domestic Pudong presence would increase from 11% to 23% compared with SkyTeam's 45%. At Hongqiao, Star's share would increase from 11% to 20% compared with SkyTeam's 45%.

China Eastern leaving SkyTeam for oneworld would fragment capacity since the airline's share would go to oneworld, while China Southern and Xiamen would remain in SkyTeam. This would then make Star's share more comparable. 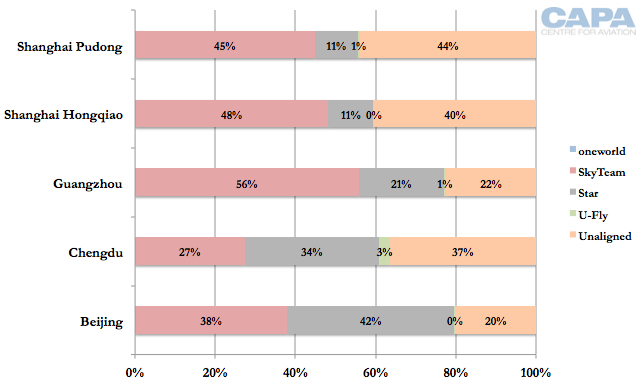 There are a few key reasons an airline joins a global alliance. As discussed above, there is strengthening of an airline's existing network and the addition of a virtual network. There is also the opportunity to add connecting passengers, such as from long haul flights. Shanghai is largely an O&D market (unlike a Frankfurt or Amsterdam) but there is a considerable opportunity to increase connections as its network increases.

Long haul partners would be interested in Juneyao's domestic network. China has not cultivated sixth freedom hubs, but these are growing and in the future will become more prominent.

Yet there could be some partnership opportunity, as Air China is growing its long haul base at Shanghai. 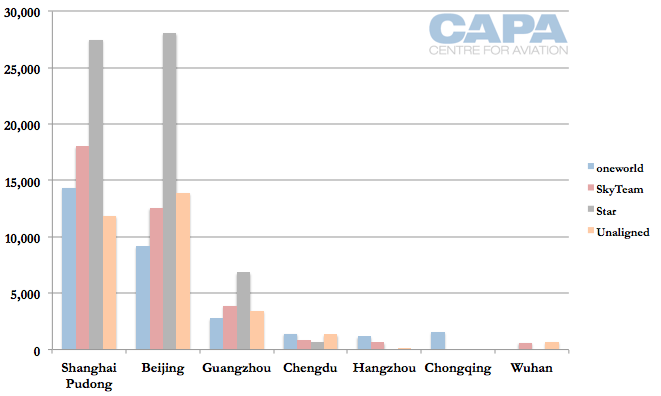 Star Alliance is the strictest of the three global alliances regarding partnerships outside the alliance. As a result Juneyao's affiliation with Star could potentially prevent it from partnering with other airlines. (Conversely, Star airlines will find it difficult to partner with airlines outside Star.)

Chinese airlines have used global alliance membership to help them expand into long haul markets. Global alliances can facilitate (and pressure) partnerships. Most recently, Xiamen Airlines formed a JV with fellow SkyTeam airline KLM for their joint operation on the Xiamen-Amsterdam route. China Eastern and China Southern have various partnerships with the AF-KLM Group while Air China and Lufthansa are working on a JV.

Juneyao received its 50th aircraft (all A320 family aircraft) in Dec-2015 and said that by the end of 2020 it expects to double its fleet to 100 aircraft. This includes widebody aircraft, which Juneyao said would be used to fly from Shanghai to Europe and North America at an unspecified time. Shanghai is a desirable long haul hub, but route allocations are being swallowed by China Eastern, Hainan and Air China.

Then again, by 2020, more competition could be allowed, or an exception could be made since Juneyao – unlike Air China and Hainan – is a Shanghai-based airline. Global alliances could help Juneyao grow long haul. Alliances may not be the perfect solution, but Juneyao would likely find them to be a significantly easier option than setting out on its international expansion as an independent airline.

As much as a Juneyao selection of Star Alliance has strategic benefits for the airline and alliance, there is no denying the competitive element from Air China. The monolithic CAAC airline was broken up decades ago, with the strategy of establishing an airline as the hub of each of China's major regions.

Inspiration was drawn from the US: Northwest was unchallenged in Detroit, American in Dallas, Delta in Atlanta. Consolidation and competition, especially in recent years, have resulted in a blurring of China's plan in major cities, as in the US where American and Delta are for example jockeying for a stronghold in Los Angeles.

Shanghai has long been a target given its commercial/financial success and China Eastern's relative weakness. Air China, and more recently Hainan Airlines, both based in Beijing, have grown long haul flights from Shanghai and are trying to increase their domestic presence. China Southern has been rebuffed in Beijing but should finally grow once the new Beijing airport opens.

Hainan has been prevented from joining an alliance (it would bring too much competition to the state-owned airlines) but Juneyao is different: it is small enough not to be a threat, yet big enough to be of value.

Juneyao joining Star would not be revolutionary but would be significant for Air China. China Eastern and China Southern, both state-owned but not bestowed with the same privileges as Air China, will continue to need to respond competitively. Yet for all their troubles, they have a far easier time than Hainan, Spring and others.

Although a merger is unlikely, and equity involvement has not been discussed, Juneyao would give Air China (the smallest domestically of the three state-owned airlines) a stronger position in Shanghai, adding to its main base in Beijing, its secondary base in Chengdu and presence in Shenzhen via Shenzhen Airlines.

In Hong Kong, Air China owns a minority stake in Cathay Pacific but any larger shareholding would trigger a takeover offer; this is expected one day. In Taiwan the ties are looser (there is no equity involved), but EVA Air is part of Star and Air China was central in EVA's joining process.

Juneyao offers another step for Air China to consolidate its presence across greater China – and, by extension, Asia – and to reaffirm its role as China's one and only flag carrier. This is a part of the world where aviation continues to carry incredible symbolism, and government recognition of the economic benefits.