Qantas’ 1HFY2011 financial results, released on 17-Feb-2011, revealed that Jetstar is an increasingly valuable unit of the Qantas Group, with the LCC offshoot close to overtaking Qantas as the group's most profitable brand. The unit contributed 32% of the group’s EBIT result and 17% of revenue, as the Qantas Group posted a four-fold increase in half-year net profits to AUD241 million.

Elsewhere, Norwegian Air Shuttle has fallen to a fourth quarter loss of EUR4.1 million and reported a 58% decline in full-year net profits to EUR24.4 million as fuel costs spiked almost 50% for the airline. Shares in Norwegian finished closed 0.8% lower, on a generally positive day for European listed carriers. Norwegian's outlook for early 2011 is faintly positive, with advanced bookings reported for 1Q2011 described as "satisfactory".

Turkish LCC Pegasus Airlines applied to the Istanbul Stock Exchange to sell up to 36% of the company in an IPO. Pegasus plans to sell an initial 31.3% stake with an option to sell a further 4.7%. Pegasus Airlines was established in 1990 as a JV between Aer Lingus, Silkar Yatırım and Net Holding. 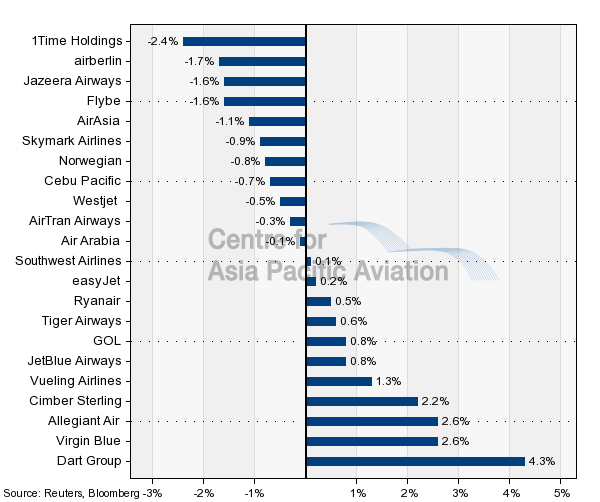