This is the second report in a three-part series on Jetstar’s Singapore-based operations, which includes Jetstar Asia, Jetstar Airways and Valuair. The first report analysed the booming Singapore-Indonesia market, where Jetstar is now looking to expand after several years of flat capacity.

This report looks at Jetstar’s position in the Singapore-China market while the third part will look at the overall outlook for Jetstar Asia. Jetstar has significantly cut back in the China market since the end of 2011, reversing a strategy from 2010 and 2011 that focused on using its Singapore hub to pursue rapid growth throughout mainland China. This strategy included using Jetstar Asia’s A320 fleet to operate medium-haul flights to southern China while using Jetstar Airways’ A330 fleet to access markets in northern China that are beyond narrowbody range from Singapore.

Singapore-based Jetstar Asia has expanded its total capacity by more than 15% over the last year from about 65,000 weekly seats in May-2012 to about 75,000 weekly seats currently, according to CAPA and Innovata data. But the carrier has shrunk capacity to North Asia by 10% while expanding in Southeast Asia by 17%.

Mainland China has accounted for the entire decrease in North Asia capacity, which is rather surprising given the importance Jetstar Asia previously placed on the Chinese market. Jetstar Asia is currently offering only about 5,000 weekly return seats in the Singapore-China market compared to about 8,000 weekly seats one year ago.

Shortly after announcing the Beijing route, Jetstar Group’s then CEO Bruce Buchanan talked up, during an event in Singapore, the prospect of several more Singapore-China routes, including Shenzhen and Shanghai. As CAPA reported in Jul-2011:

While major cities such as Shanghai and Beijing offer potentially lucrative opportunities as they are currently underserved, there are now dozens of medium-size cities in China which are rapidly growing and have the base to support services to Singapore, in particular as outbound tourism in China expands rapidly. Singapore is a popular destination for Chinese tourists and as income levels in China grow and LCCs enter new markets, holidays to Singapore is becoming affordable to more Chinese. “We’re very, very focused on building a China presence,” Mr Buchanan said. “We think this decade is the decade China will bloom.”

But Jetstar did not end up launching a single new Singapore-China route in 2012 or 1H2013, choosing to instead focus on adding capacity within Southeast Asia. It also quietly dropped service to Guilin at the end of 2011 and in Mar-2013 reduced Guangzhou from daily to four weekly frequencies.

Jetstar’s reversal in China is puzzling as Singapore has emerged as a popular destination for Chinese tourists while business and cultural ties between the two countries are strong. China is the fourth largest market from Singapore after Indonesia, Malaysia and Thailand. Seat capacity in the Singapore-China market has grown by over 10% over the last year while the Jetstar Group has cut capacity in the market by almost 40% from about 11,000 return seats in May-2012 to less than 7,000 weekly return seats currently (includes Jetstar Asia and Jetstar Airways capacity). 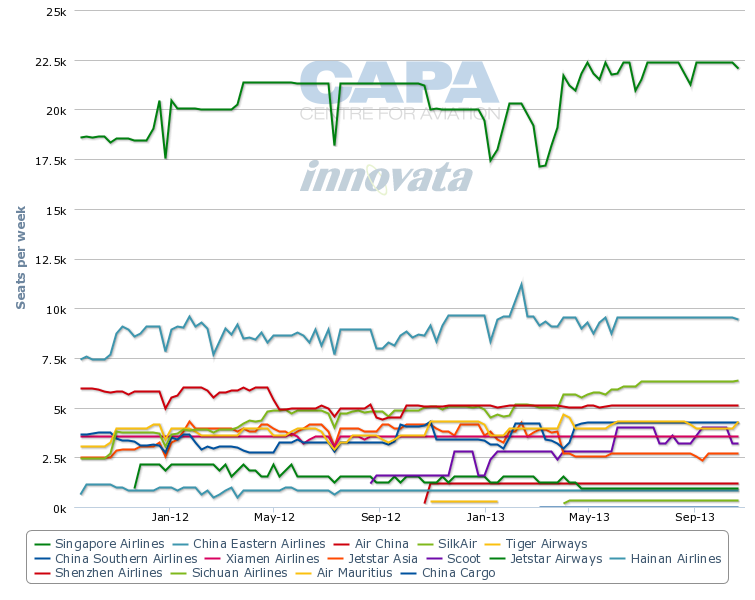 China is also a strategically important market to Jetstar that is generally under-penetrated by LCCs. The strategy implemented by Mr Buchanan (who has since left Jetstar) was to initially expand aggressively in China from Jetstar Asia’s Singapore base and later look to use new affiliates Jetstar Japan and Jetstar Hong Kong to serve the same Chinese cities. Jetstar Japan launched services in 2012 while Jetstar Hong Kong plans to launch services in 2H2013.

Jetstar Hong Kong will now have to work harder in establishing the Jetstar brand throughout China rather than benefit from leveraging existing Jetstar Group services. Jetstar sees its new joint venture in Hong Kong with China Eastern as its potential springboard into China. But the group’s failure to successfully grow Jetstar Asia’s presence in China illustrates the potential challenges.

Other Asian LCC groups expand in China while Jetstar flounders

While Jetstar has pulled back in China over the last year, other Asian LCC groups, in particular AirAsia, have continued to rapidly add capacity into the mainland China market.

AirAsia currently has over 55,000 seats to and from mainland China, making it by far the largest LCC brand in China’s international market. This represents growth of 44% compared to the less than 39,000 weekly seats the AirAsia brand had in China in May-2012. 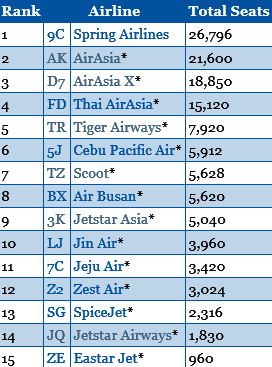 The AirAsia strategy for the Malaysia-China market is similar to the Jetstar strategy for the Singapore-China market, with A320s being used for shorter routes and A330s for the longer routes. But the two groups have gone in opposite directions with AirAsia successfully adding capacity in several new and existing markets while Jetstar has withdrawn from some markets and cut capacity in others.

The Singapore-China market is about 40% bigger than the Malaysia-China market, making AirAsia’s achievement relative to Jetstar even more impressive.

The cuts at Jetstar have even allowed rival LCC group Tiger to overtake Jetstar as the largest LCC in the Singapore-China although Tiger has only modestly increased capacity to China over the last year.

In Jun-2013, Scoot will also overtake Jetstar as a larger LCC in the Singapore-China market. Once Scoot introduces services to Nanjing, its fourth destination in mainland China, the long-haul low-cost carrier will have 4,020 weekly one-way seats from Singapore to China, putting it slightly ahead of the Jetstar Group total but slightly behind the Tiger total. Scoot currently has 2,814 weekly one-way seats from Singapore to China.

The Singapore-Guangzhou route best illustrates Jetstar’s weakening position in the Singapore-China market. Jetstar Asia currently only has about a 6% share of capacity between Singapore and Guangzhou compared to about 11% one year ago. 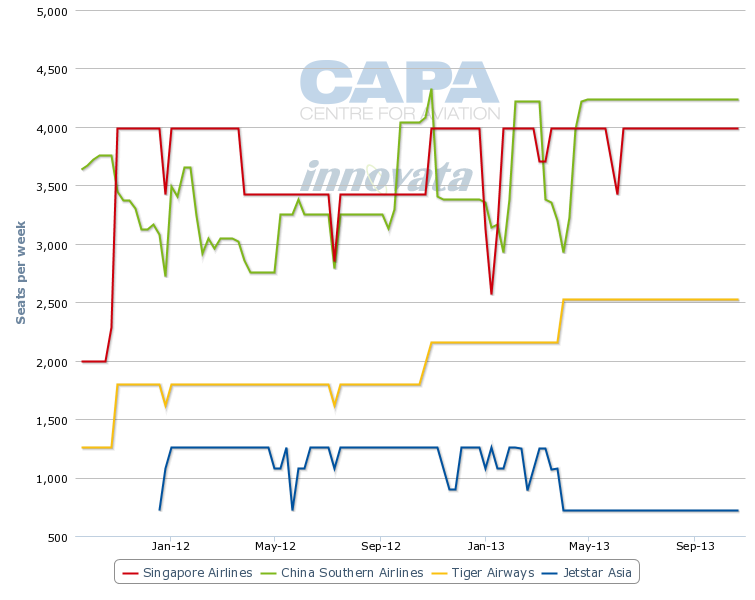 Singapore-Guangzhou is the third largest route in the Singapore-China market. In the second largest, Singapore-Beijing, Jetstar has seen its share of capacity reduce to only 7% as a result of the recent capacity cut.

SIA, which added a fourth daily flight to Beijing in late 2011 at about the same time as Jetstar’s launch (with similar timings), currently has a leading 60% share of capacity in the market. Air China, which operates two daily flights on the route, accounts for the remaining 33% share. 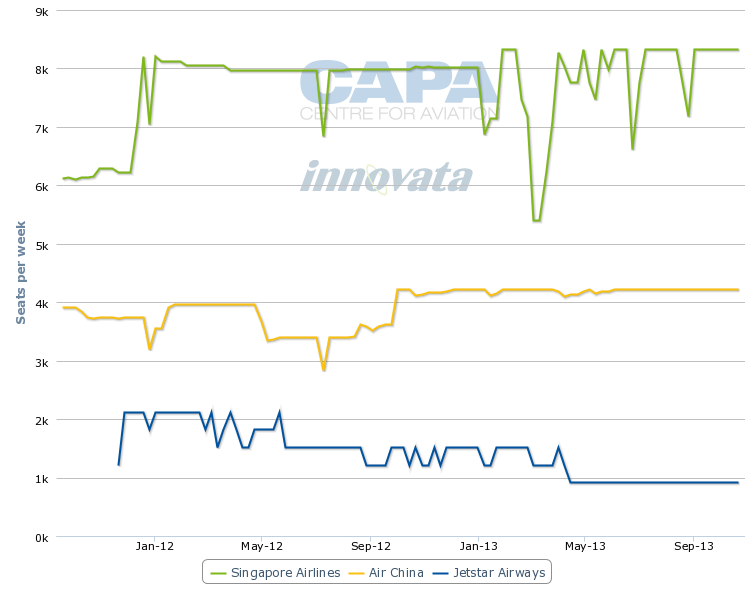 Jetstar's Singapore-Beijing flight originates in Melbourne, providing feed from Australia. Jetstar also has been offering Beijing passengers connections to several destinations in Southeast Asia, particularly targeting the under-served Indonesia-China market, where there are a limited number of non-stop flights.

But Singapore-Beijing route has obviously struggled, being reduced from seven to three weekly frequencies in the 18 months since it was launched. Jetstar has had similar setbacks in other Singapore-China markets which initially looked promising, cutting two entirely (Ningbo and Guilin) and cutting capacity in Guangzhou.

As a result, Jetstar has lost its first mover advantage in the Singapore-China LCC market, just as it has in the Singapore-Indonesia market (as discussed in the first part of this series of reports). The Jetstar Group still has a relatively strong position in the overall Singapore market. But China is too important a market to settle for an insignificant presence.

Jetstar will need to take another stab at tackling China from Singapore, using its A320s and soon its new fleet of 787s. While developing a mainland Chinese network from Hong Kong is an attractive option for Jetstar, the Southeast Asia-China market is also attractive with huge growth opportunities for LCCs over the medium to long terms. If Jetstar does not take increase its presence in this important market, its competitors will quickly and happily fill the void.