This has been a breakout year for Jetstar Pacific following several years of virtually no growth. Over the last year Jetstar Pacific has added three domestic destinations for a total of 10 and entered the international market.

More new routes are expected by the end of 2014 as the carrier adds three more A320s for a total of 10 aircraft.

The expansion is the biggest response so far by its majority shareholder, Vietnam Airlines, to the rapid expansion of Vietnam’s now largest LCC VietJet Air.

The recent onslaught of new international routes for Jetstar Pacific and VietJet indicates an escalating battle between the rivals as Vietnam’s LCCs finally start to penetrate the international market. Currently there are about 350 weekly LCC international flights from Vietnam, including only 56 operated by Vietnamese carriers compared to almost 300 by six foreign carriers.

There are huge opportunities for Vietnamese LCCs to stimulate demand and grow the international market. Vietnam has a fast-growing economy, an expanding middle class population and an emerging tourism sector. Its international market is relatively underserved by LCCs compared to most other Southeast Asian countries.

Vietnam’s LCCs have already pushed up the domestic penetration rate to nearly 50% compared to less than 20% prior to VietJet’s launch at the end of 2011. Vietnam’s domestic market has since grown at a high double digit clip.

International expansion can be more challenging as competition with foreign carriers can be intense. While there are several international routes in Vietnam that are ripe for LCC stimulation, routes such as Bangkok and Singapore are already relatively well served and could see overcapacity as Vietnamese LCCs start to make a move. The result could be aggressive competition with foreign LCC groups, particularly AirAsia, as well as between Jetstar Pacific and VietJet.

VietJet added on 12-Sep-2014 a second daily flight Ho Chi Minh-Bangkok, likely aware of Jetstar’s plans to enter the market. VietJet may also have been keen to add capacity on Ho Chi Minh-Bangkok as Thai LCC Nok has been preparing to launch services to Ho Chi Minh and Hanoi.

Ho Chi Minh-Bangkok is a large market but before VietJet was only served by one LCC, Thai AirAsia. Thai AirAsia generally serves the route with three daily flights (with some adjustments during off peak periods).

The second flight from VietJet and upcoming launch of services from Jetstar Pacific means the Ho Chi Minh-Bangkok route will receive a 50% increase in LCC capacity from 5,040 weekly one-way seats to 7,560 seats. If Nok moves forward with plans to also serve the route, LCC capacity could increase by about 75% (assuming one daily flight from Nok).

Thai Airways currently uses widebodies on the route but is switching in late Oct-2014 one of the daily frequencies to Thai Smile A320s while Vietnam operates A321s on both of its Bangkok flights. 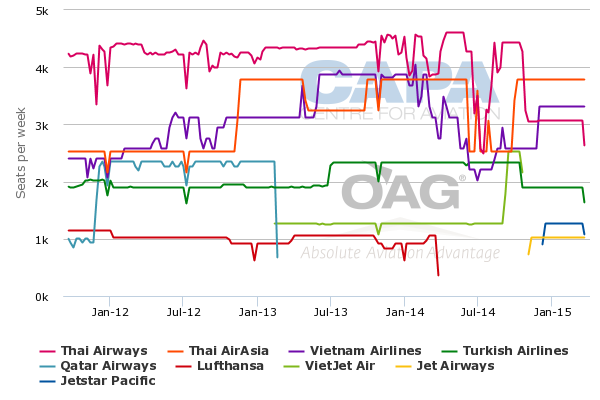 Notes: includes both Bangkok airports
VietJet line should be flat at 2,520 seats for Oct-2014 through Mar-2015
Source: CAPA – Centre for Aviation & OAG

VietJet quickly moving to expand its international network to South Korea, Cambodia and Taiwan also could be partly driven by a desire to enter markets before Jetstar enters the markets. Siem Reap and Taipei in particular are markets which would likely interest Jetstar as the group already serves these destinations from other points in Asia. (Jetstar currently serves Siem Ream from Singapore and Taipei from Singapore and Osaka).

Jetstar is generally keen to connect the dots and leverage its brand in existing international markets by adding routes from new affiliates.

Jetstar Pacific’s first international destination, Macau, was an exception to this strategy as Macau is currently not served by any other Jetstar affiliates. Jetstar Pacific launched services to Macau in Mar-2014 with three daily flights to Macau, including two from Ho Chi Mnh and one from Hanoi.

Ho Chi Minh-Macau was quickly dropped but service from Da Nang in central Vietnam to Macau was added. Hanoi-Macau was also subsequently dropped, leaving service only between Da Nang and Macau.

Jetstar Pacific’s schedule shows Da Nang-Macau is currently operated with two daily flights but with neither flight being operated after late Oct-2014. The suspension of services to Macau is not too surprising as Jetstar previously referred to the Macau flights as charters, which would also explain the several changes over the last six months in the Macau schedule.

The Macau flights were available for sale on Jetstar’s website but likely were supported or even underwritten by agents. Jetstar Pacific could potentially resume service to Macau in 2015 on a seasonal basis.

Bangkok and Singapore are more strategically important markets. Jetstar Pacific will also have the capacity to launch other new international destinations by the end of 2014 as the carrier is planning to have a fleet of 10 A320s by the end of 2014.

Jetstar Pacific’s currently fleet consists of seven A320s, according to the CAPA Fleet Database. But the carrier was wet leasing during the peak northern summer months an A321 from Vietnam Airlines to provide supplemental capacity.

Jetstar Pacific has been leasing used aircraft rather than sourcing new A320s from the Jetstar Group. Its current fleet range in age from four years to 10 years with an average age of just under eight years, according to the CAPA Fleet Database.

Jetstar Pacific began 2014 with only five A320s. The doubling of the carrier’s fleet in 2014 follows a long period of no fleet expansion which began back in 2008, when the LCC model was adopted and Jestar acquired an initial 27% share. (Previously the airline was known as Pacific Airlines and followed a full-service model with services in both the domestic and international markets. Jetstar increased its stake to 30% in 2012 while a majority 70% stake was transferred from government investment firm SCIC to Vietnam Airlines.)

Shortly after the rebranding Jetstar Pacific added one A320 to supplement five 737-400s which were inherited from Pacific Airlines. But a second A320 was not added until late 2010 and a third A320 was not added until late 2012. The third aircraft came at about the same time as another two A320s, allowing Jetstar Pacific to phase out its 737 fleet in early 2013 and finally complete its transition to an all-A320 fleet. 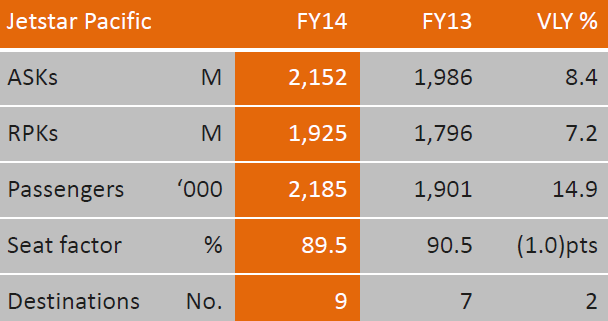 Jetstar Pacific’s load factor has consistently been averaging about 90% over the last three years, a strong indication that its low fares have been able to gain traction in the domestic Vietnamese market. But the LCC is believed to still be unprofitable, due primarily to low yields and insufficient scale.

Jetstar has said domestic yields in Vietnam were flat in FY2014. This can be viewed as a positive given the rapid expansion at VietJet but it also shows that yields are probably still not at sufficient levels for sustained profitability, even with high load factors.

Expanding the fleet to 10 aircraft should result in better economies of scale and a stronger position against competitors. But Jetstar Pacific is not likely to be profitable in the near term. The growth is being pursued strategically as Jetstar Pacific and Vietnam Airlines cannot afford not to respond to the continued rapid expansion at VietJet.

Vietnam Airlines initially seemed reluctant to expand Jetstar Pacific after taking over a 70% stake in early 2012. But VietJet’s fast expansion along with Vietnam Airlines’ plans for an initial public offering and potential sale of a strategic stake likely changed its stance.

But VietJet has continued to expand more rapidly and has roughly doubled capacity in the Vietnamese domestic market over the last year. VietJet now serves 12 domestic destinations, including nine of the 10 destinations that Jetstar Pacific serves.

The only destination that only Jetstar Pacific serves is Than Hoa, which is served with one daily flight from Ho Chi Minh. Jetstar Pacific has one other route, Buon Ma Thuot to Vinh, which also is not currently served by VietJet.

Generally the opportunities for further domestic network expansion by either of Vietnam’s LCC are relatively limited as all the major routes are already served by both carriers. There are bigger potential opportunities in the international market.

Jetstar Pacific could potentially add some capacity on domestic trunk routes as VietJet has a bigger share of capacity on nearly every overlapping route and overall has more than twice as many domestic seats. But the Vietnam Airlines Group has to carefully balance domestic expansion as it is the market leader and, unlike its competitor, has both a low-cost and full-service brand.

Expanding Jetstar Pacific is the right strategy. Continuing to let VietJet capture all the growth at the entire bottom end of the market is not an option.

But coordination between Vietnam Airlines and Jetstar Pacific will not come easily. Jetstar Pacific and its shareholders need to be prepared to withstand a prolonged battle against aggressive competitors.

Meanwhile consumers and the respective tourism industries will be the beneficiaries of the large surge in capacity.