VietJet’s new Hanoi-Seoul service is only the second LCC route linking Vietnam with North Asia. Ho Chi Minh-Singapore is Vietnam’s largest international route and the entrance of Jetstar Pacific indicates a potential strategic shift at parent Vietnam Airlines, which until now has been reluctant to use its LCC brand on international routes it already serves with its full-service product.

Privately owned VietJet launched services in Dec-2011 and is now Vietnam’s largest LCC, serving 12 domestic and three international destinations with a fleet of 15 A320s. Jetstar Pacific was established in 2008, making it Vietnam’s original LCC, but was overtaken by a fast-expanding VietJet in late 2012.

Jetstar Pacific initially operated three daily flights to Macau, including two from the central Vietnamese city of Da Nang and one from Hanoi. But the carrier has since suspended Hanoi-Macau, leaving it with just one international route. (Prior to 2008 the airline was known as Pacific Airlines and followed a full-service model with a mix of domestic and international destinations.)

Jetstar Pacific is planning further international expansion in 2H2014 as it adds four more A320s. Singapore will become the carrier’s second international destination on 27-Oct-2014 when one daily flight on the Ho Chi Minh-Singapore route is launched. Jetstar Pacific also has unveiled plans to launch on 1-Aug-2014 Thanh Hoa as its 10th domestic destination.

Thanh Hoa, a secondary city in northern Vietnam, will initially be served from Ho Chi Minh. Further domestic and international expansion at Jetstar Pacific is expected by the end of 2014 as more A320s are delivered.

Jetstar Pacific to double its fleet in 2014, ending quiet period

The doubling of Jetstar Pacific’s fleet this year from five to 10 aircraft ends a long period of virtually no growth for the LCC. Jetstar Pacific has maintained a fleet of only five to six aircraft for over five years.

The airline was surprisingly slow to expand after Australia’s Jetstar Group purchased a 27% stake prior to the 2008 rebranding; Jetstar later increased its holding to 30%. The slow or non-existent rate of expansion continued after the majority 70% stake was moved from Vietnam’s State Capital Investment Corporation to Vietnam Airlines in 2012.

Jetstar Pacific’s network was also stuck at between five to seven destinations for five years. But the launch of Singapore will mark the fifth new destination in less than one year. In addition to Macau and soon Thanh Hoa, Phu Quoc was added in Dec-2013 while service to Hue resumed for the first time in several years on 10-Jul-2014.

VietJet also has continued to expand its domestic network, with Can Tho joining its domestic network on 22-Jul-2014. Can Tho is being served from Da Nang, marking VietJet’s second route which was previously not served non-stop by any carrier. VietJet’s other exclusive route is Vinh to Dalat, which was launched in Dec-2013. Jetstar Pacific also now operates one exclusive route, Vinh to Buon Ma Thuot.

For example Thanh Hoa will become the 13th Vietnamese airport with LCC service and the only Jetstar Pacific destination that is not currently served by VietJet. Thanh Hoa is currently only served by Vietnam Airlines with 10 to 12 weekly A321 flights from Ho Chi Minh, according to OAG data.

As a result domestic growth opportunities in Vietnam’s LCC sector are now primarily limited to new point to point routes bypassing Hanoi or Ho Chi Minh or capacity expansion on trunk routes. There will still be opportunities for both, particularly as Vietnam’s overall domestic market continues to grow at annual double digit rates. But undoubtedly there are more opportunities in the relatively less penetrated international market.

Vietnam is within narrowbody range of almost all of Asia, making it ideal for the short-haul LCC model. The inbound market is growing rapidly as Vietnam continues to emerge as a popular tourist destination while outbound demand is also growing driven by economic growth and an expanding middle class.

Vietnam also has the potential of emerging as an LCC transit hub as it is geographically well positioned for linking Southeast Asia with North Asia. Vietnam Airlines is also starting to look at boosting transit traffic, particularly as it accelerates long-haul expansion. But until now the hub potential of Ho Chi Minh and Hanoi as well as smaller Da Nang has been untapped.

Remarkably there are currently only two year-round LCC routes linking North Asia and Vietnam – Da Nang-Macau service from Jetstar Pacific (launched in Mar-2014) and Hanoi-Seoul from VietJet (launched on 24-Jul-2014). This excludes seasonal service from Asiana LCC affiliate Air Busan, which according to OAG is operating two weekly flights from Busan to Da Nang between early Aug-2014 and mid Sep-2014.

Overall there are only 12 international LCC routes from Vietnam served by eight carriers, including six foreign carriers and the still predominately domestic focused Jetstar Pacific and VietJet.

VietJet international growth has been slower than expected

While VietJet has pursued rapid and steady domestic expansion over the past two years it has been slow to build up its international network. Seoul was initially in its network plan for 2013 along with Singapore, which was launched in May-2014. A Ho Chi Minh-Taipei service was also originally envisioned for 2013.

On the Hanoi-Seoul route VietJet is now competing against Vietnam Airlines, Asiana and Korean Air – each of which has about 3,000 weekly one-way seats compared to 1,260 for VietJet. But unlike in its other initial international routes, VietJet has the benefit of being the first LCC in the Hanoi-Seoul market.

VietJet has quickly developed a strong brand within Vietnam but is still relatively unknown in other markets. The group clearly recognises this weakness and has therefore focused primarily on the domestic market while moving very slowly in implementing the international component of its business plan.

But as VietJet continues to expand its fleet rapidly and attempts to establish joint ventures in other markets it will have to be bold and enter more international routes - despite the inherent risks.

VietJet is slated to take in late 2014 the first of the 62 A320s it ordered last year. The group’s initial fleet plan for 2014 envisioned 10 additional aircraft for a total of 20 A320s, including nine leased aircraft (five of which have already been delivered) and the first aircraft from its order with Airbus. However, some of these aircraft could be allocated to joint venture start-up Thai VietJet Air.

More routes to North Asia – including Japan, Hong Kong and Taiwan – are likely by early 2015 as VietJet’s fleet expansion accelerates with the delivery of A320s directly from Airbus. Vietnam-North Asia markets cater primarily to inbound tourists but with the right partnerships with local travel agents and its low cost structure VietJet should be able to make the routes viable.

North Asia currently accounts for about 43% of total international capacity from Vietnam. South Korea along with Singapore are the largest international markets, with about 51,000 weekly seats each. Japan and Thailand are roughly tied for third while Taiwan, Hong Kong and China are also among Vietnam’s top 10 international markets.

With Singapore, Thailand and Malaysia already relatively well penetrated by LCCs, there are potentially huge opportunities to start targeting routes from Vietnam to Korea, Japan, Taiwan, Hong Kong and China. The North Asia flights are also important in VietJet’s development as they will generally be operated during overnight hours, enabling the LCC to increase aircraft utilisation levels - thereby reducing unit costs. The new daily Hanoi-Seoul service is VietJet’s first back of the clock route.

Jetstar Pacific currently does not have any overnight routes but also will likely seek them out to improve utilisation. As Da Nang-Macau is only a two hour flight both frequencies are operated during the day.

Jetstar Pacific currently has no route longer than two hours. Da Nang-Macau and Ho Chi Minh-Hanoi are both about two hours while Ho Chi Minh-Singapore is slightly less than two hours in duration. North Asia expansion would provide longer stage lengths, resulting in higher utilisation levels. Japan could be particularly attractive as Jetstar Pacific would be able to leverage the Jetstar Japan network and brand, just as it will do in Singapore with Jetstar Asia. VietJet meanwhile is just starting to establish its cross border hub strategy.

Jetstar Asia will continue to operate three daily flights on the route. The new Jetstar Pacific frequency will give the Jetstar Group the highest number of frequencies (28 per week) and a leading 27% share of total capacity between Ho Chi Minh and Singapore. Tigerair is currently the market leader with 23 weekly flights and slightly more than 22% of capacity but is cutting back to 20 weekly flights from early Sep-2014 and will operate 21 weekly flights from early Nov-2014, according to CAPA and OAG data.

Vietnam Airlines currently has a 21% share of capacity in the Ho Chi Minh-Singapore market and Singapore Airlines has about a 22% share (marginally less than Tigerair). Vietnam Airlines operates three daily A321 frequencies while SIA has two daily flights using A330s and 777s.

Lion Air also serves the Ho Chi Minh-Singapore route as part of a daily 737-900ER flight that continues onto Jakarta. Lion currently has an 8% share of capacity in the market while VietJet is the smallest player with a 6% share.

VietJet's single daily flight compared to the three to four daily frequencies from Tigerair and Jetstar is clearly a competitive disadvantage. VietJet will struggle to close this gap given the slot constraints at Singapore and its lack of a strong brand on both ends of the route. 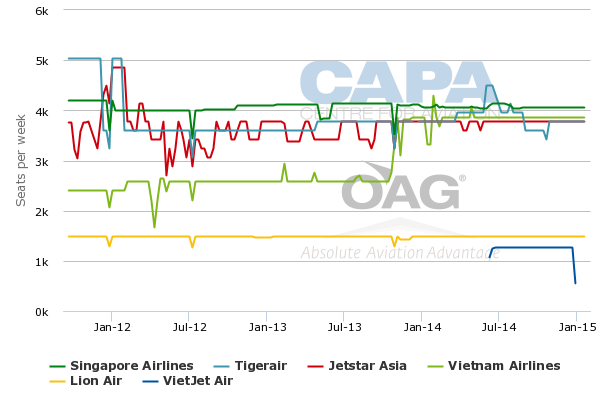 Using Jetstar Pacific on the Ho Chi Minh-Singapore route is a sound move for the Vietnam Airlines Group as it enables the group to tap into the large demand at the lower end of the market. Previously only Jetstar Asia was tapping into this end of the market, giving Jetstar Group a share but not Vietnam Airlines (Jetstar Asia is a joint venture between the Jetstar Group and Singaporean investors).

Jetstar Pacific and Jetstar Asia also are aiming to increase their share of the overall Singapore-Vietnam market by promoting domestic connections beyond Ho Chi Minh. Jetstar has offered connections between Singapore and select Vietnamese cities for several years but connectivity will improve significantly as Jetstar Pacific enters the Singapore market with its own flight and as it continues to expand its domestic network. 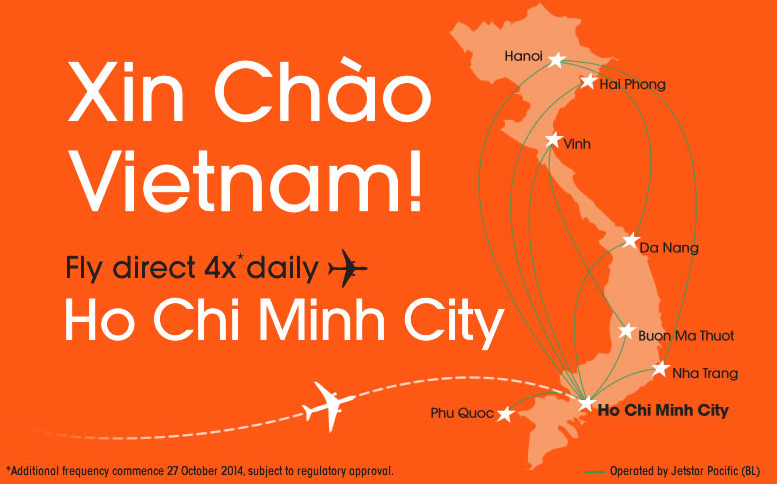 Launching Singapore is an important step in Jetstar Pacific’s evolution as it shows Vietnam Airlines now recognises the potential of having two brands operate side by side in key international markets. The dual brand strategy at Vietnam Airlines has evolved much more slowly than similar strategies at other Asian full-service airline groups.

Jetstar Pacific has been used rather conservatively in the domestic market, with slow expansion despite VietJet’s rapid expansion. VietJet currently has about a 26% share of Vietnam’s domestic market compared to slightly over 10% for Jetstar Pacific, giving LCCs a combined 36% while Vietnam Airlines still has a leading 64%. Jetstar Pacific also has so far been slow to expand in the international market and its only current destination outside Vietnam, Macau, is not served by Vietnam Airlines.

The flag carrier needs a clearer and better executed strategy for fending off increasing competition, particularly from VietJet, which is also now looking at expanding into the long-haul market with A330s.

The Vietnamese market should be able to support rapid growth in both the full-service and low-cost sectors. The current 14% international LCC penetration rate is particularly low compared to other Southeast Asian markets. In Malaysia LCCs now account for about 50% of international capacity while in Singapore the LCC penetration rate is currently over 30% despite having a much larger portion of long-haul capacity than Vietnam.

If Jetstar Pacific and Vietnam Airlines do not take the initiative to accelerate international expansion they risk leaving the door open for foreign competitors. This is a turbulent marketplace, but the Vietnamese airlines are sitting in prime position in a market with high potential.