Jetstar Hong Kong’s decision to introduce a third investor – and its first based in Hong Kong – should be seen in the context of changing attitudes in Hong Kong. While the territory wants to be pro-competitive, it is mindful of its experience with Hong Kong Airlines.

Of greater interest to the Hong Kong regulators than share ownership of a prospective airline is where control rests. Hong Kong wants to ensure any future airline has unimpeded growth and maximises potential, for itself and Hong Kong. For example, Hong Kong Airlines is owned by mainland China’s HNA Group and largely run by HNA executives on secondment. The busy and expansive nature of HNA has, on this thesis, meant that Hong Kong Airlines has missed out on orderly growth.

The introduction of casino mogul Stanley Ho’s Shun Tak Holdings to Jetstar Hong Kong with a 33.3% stake gives Jetstar Hong Kong local ownership, which is not required presently but may be so, directly or indirectly, in the future.

Jetstar's 2013 launch would be challenging; initial fleet decreased from three to two A320s

Jetstar Hong Kong will launch eventually, but after several delays the 2013 time frame looks increasingly challenging. The carrier has mainland Chinese approval but is waiting on Hong Kong permission. Hong Kong's CAA has said it will not approve new carriers while it currently gazettes its application procedure to reflect on the topic of local ownership and control. This is not entirely a matter of a lofty establishment of legal and commercial principles; a quid pro quo factor at play is gaining expanded bilateral access for Hong Kong carriers in Australia, where capacity allocations are fully taken.

The launch of Jetstar Hong Kong as well as formal clarification from the government on ownership and control structures will light the way for prospective entrants. Japan’s Peach and mainland China’s Spring Airlines are interested in a potential Hong Kong affiliate.

Jetstar Hong Kong's planned capitalisation of HKD1.54 million (USD198 million) remains unchanged. In line with the new shareholding structure, the Qantas Group has reduced its initial planned equity investment from a maximum of USD99 million to a maximum of USD66 million. China Eastern Airlines and Shun Tak will also contribute up to USD66 million each.

Jetstar in early 2013 quietly announced it would launch with only two A320s, a decrease from the three launch aircraft it had spoken of since the start. A spokeswoman remarks that "plans are always changing" but affirms the carrier still intends to have 18 A320s by 2015, another projection made at the start. But if Jetstar Hong Kong cannot launch in 2013, introducing 18 aircraft over 2014 would be operationally challenging and also likely create over-capacity as the market struggles to absorb such a rapid influx of seats. With Hong Kong quickly running out of slots – and a new runway not to open until early next decade – exceptional short-term pain from over-capacity may be worth it in the long-term so Jetstar Hong Kong can secure as many slots as possible.

Jetstar Hong Kong's launch, combined with announced plans from Hong Kong Airlines to transform its sister carrier Hong Kong Express into a LCC, could see Hong Kong's LCC penetration rate rise from its very low level of 5% to 15% of seats in 2015.

Just a week prior to Jetstar Hong Kong formally announcing Shun Tak’s involvement, the carrier was publicly adamant it was “confident it could satisfy the local place of business” requirement and thus launch. But others close to matter believe that Jetstar Hong Kong – even before it was announced – could not have launched flights without a local owner.

Hong Kong is rare in requiring airlines to have their principal place of business be in Hong Kong but without a local ownership requirement. This differs from most other countries, which require majority local ownership and control – and thus place of business. Some countries like Australia, New Zealand and Chile allow majority foreign-owned airlines provided they have local management – but such carriers are restricted to domestic markets; as there is no domestic market in Hong Kong, Jetstar Hong Kong is due to fly internationally, as Hong Kong Airlines already does.

In other foreign LCC joint ventures, countries have turned a blind eye to where management control is exercised, so long as on paper there is local ownership. It is quietly accepted that Jetstar Australia exerts considerable, to say the least, influence over Singapore-based Jetstar Asia while AirAsia Berhard (Malaysia) has similar influence over affiliates in countries including Indonesia and Thailand. Without such acceptance, Asia's international markets would not be experiencing the level of liberalisation and LCC activity that they are now able to.

Jetstar Hong Kong’s application process has coincided with an increased spotlight on Hong Kong Airlines, which launched in 2006. The carrier has pursued rapid growth, but this not commensurate with support, leading to delays, cancellations and back office problems that found their way to the press (at times, with a little help from competitors).

Hong Kong Airlines’ fast growth slowed in 2012 when Hong Kong’s Civil Aviation Department imposed restrictions to require it to expand with greater stability. This process would have shown how Hong Kong Airlines is effectively run by HNA staff from mainland China and reporting back to the group, rather than running the business as a separate entity.

HNA is considered by peers to be the most international of China’s airlines and is generally well-respected, but its high-growth has meant that some of its business moves do not succeed. Over the last year the carrier has announced stakes in Ghana’s Africa World Airlines and France’s Aigle Azur plus unsuccessful bids in the Philippines and Saudi Arabia. At home it is expanding with new carriers including Fuzhou Airlines.

Hong Kong authorities want to ensure in future that airlines are locally controlled not being virtually run from another country. The slow movement on the Jetstar Hong Kong application is designed to ensure the LCC is independent and does not repeat the experience with Hong Kong Airlines.

Hong Kong will not shelter Cathay Pacific, but nor does it want to be responsible for Cathay’s demise

Hong Kong has until now been a haven for LCC-free operations, as Cathay Pacific has taken the almost unique position in Asia Pacific of not establishing an LCC subsidiary. Jetstar Hong Kong will be the litmus test, and could lead to a rash of new carriers establishing themselves in the SAR. While those would probably be LCCs, there is also the possibility that major full-service carriers would also seek to establish branch operations in Hong Kong – and, in any event, as LCCs hybridise, so Cathay's position becomes more vulnerable.

Hong Kong wants to be pro-competitive and has not sheltered Cathay Pacific (it did approve Hong Kong Airlines' entry after all) but it is also intent on Cathay having a future, something which could be at risk if low barriers to entry were to permit several airlines to establish in Hong Kong. 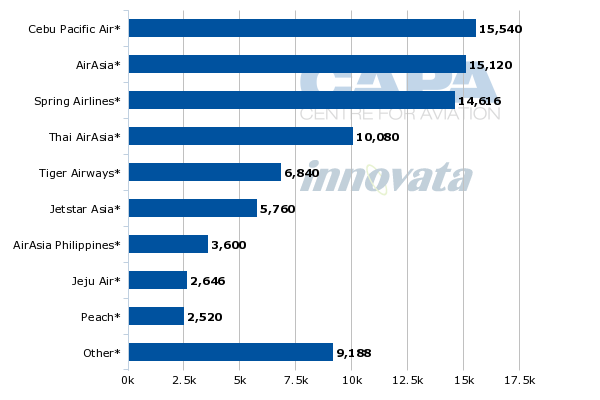 Cathay Pacific has publicly retained a cool attitude towards Jetstar Hong Kong, but behind the scenes it is understood to have heavily lobbied via Air China to Beijing. Air China is Cathay’s cross-equity partner and Air China is China’s flag carrier and, also being based in the capital of Beijing, carries considerable favour with the government. While Hong Kong officially has a separate government from Hong Kong, mainland China does retain indirect control; Hong Kong’s chief executive must be approved by mainland China.

Then there is the more pragmatic and mercantilistic aspect of the matter. Hong Kong has exhausted its airline capacity access to Australia under the bilateral air services agreement. Cathay would like to expand its presence (especially as competitors Singapore Airlines and Emirates over the past year have pumped capacity in) while Hong Kong Airlines could even launch its own services. (Emirates and Cathay are restricted by frequencies while Singapore Airlines benefits from a much more liberal policy with Australia – now for example with Virgin Australia also partnering with Singapore Airlines.) 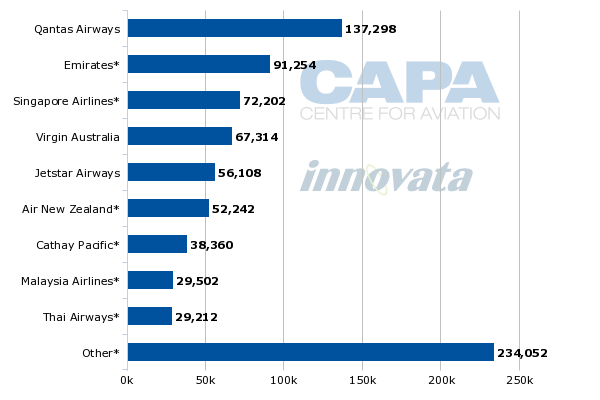 Australian carriers have not used their full capacity allotment and, without full beyond rights – notably into the Mainland – will not in the foreseeable future. Virgin Australia is largely out of the picture and Qantas is no longer interested in the traffic rights beyond Hong Kong it once was, such as to London. In the old currency, countries negotiate bilaterals on behalf of their airlines, and the one access Qantas would like is to see Hong Kong approve Jetstar Hong Kong.

Hong Kong has a restrictive bilateral environment but Australia in the past has benefited (beyond typical third and fourth freedoms) from Hong Kong needing more access to Australia than Australia needs to Hong Kong. In 2004 Qantas received access to a Hong Kong-London service in exchange for Hong Kong carriers having greater access to Australia – necessary as at the time Dragonair was planning its own services to Australia. (Dragonair was shortly afterwards taken over by Cathay, confining the smaller carrier to regional services.)

Jetstar Hong Kong is considered the test case for further new entrants. Japan's Peach Aviation (one-third of which is owned by Hong Kong’s First Eastern investment), as well as mainland China’s Spring Airlines (which over the last year has greatly built up its Hong Kong presence) have publicly stated their interest in establishing a Hong Kong affiliate. Hong Kong Airlines has also flagged interest in transforming its Hong Kong Express business to an LCC. But there is a practical issue too, with Hong Kong's Chek Lap Kok Airport to run out of slots in a few years' time, with no major growth until a third runway is completed sometime early next decade.

And no easing on pressure for Cathay

Throughout the process Cathay Pacific has staunchly insisted that LCCs have no impact on its business, while lobbying vigorously against Jetstar Hong Kong's entry. This is quite understandable, but Cathay is also steering a lone course in ignoring LCCs' ability to generate more profitable or entirely new types of traffic based on lower fares – allowing entry to new destinations or higher frequency or right-sized capacity to existing destinations.

It seems clear that Jetstar Hong Kong will in due course gain the access it seeks, perhaps to be followed by others, once the Hong Kong authorities complete their tortuous review. Whether Cathay sees the current impasse as an opportunity to get its own LCC plans in place or is merely seeking to delay the evil moment as long as possible is less clear.

And even if Cathay wants stick to its old world argument that LCCs have no effect on its existing business, it will need to find ways of responding to the new growth opportunities that Jetstar Hong Kong will find.