Jetstar close to overtaking Qantas as most profitable brand in group

Qantas’ 1HFY2011 financial results, released on 17-Feb-2011, revealed that Jetstar is an increasingly valuable unit of the Qantas Group, with the LCC offshoot close to overtaking Qantas as the carrier's most profitable brand.

The importance of Jetstar is expected to continue. Qantas CEO, and former Jetstar CEO, Alan Joyce recently ordered a review of Qantas’ unprofitable international arm. The most likely outcome will be measures to reinforce and rationalise existing routes for the Qantas brand and a progressive increase in longhaul operations under the Jetstar brand. Jetstar benefits from having a lower cost structure than its parent, with fewer unions and different pay scales, allowing it to operate profitably in markets where Qantas is unable to compete effectively. But it is important for the main Qantas brand to retain a significant international operation so it can retain a foundation for its valuable corporate market and its Frequent Flyer Programme. Meanwhile, Jetstar is a remarkably useful ingredient in the Qantas Group.

Qantas remains one of the few airlines with a successful dual-brand strategy. As growth at the LCC subsidiary continues, Qantas will need to be cautious that the premium Qantas brand remains and that the LCC maintains its cost advantage over its LCC rivals. Meanwhile, the carrier is planning continued strategic growth in the Asia Pacific, both organically and through JV agreements with airlines in the region.

EBIT margin of 11% as underlying EBIT increases to USD143m

Jetstar reported a record underlying EBIT of AUD143 million (USD143 million) in the six months to 31-Dec-2010, marking an 8% year-on-year increase, on revenue of AUD1.3 billion (USD1.3 billion, +19%). This resulted in an EBIT margin of 10.6% with revenue growth aided by strong ancillary revenue generation of above AUD20 per passengers.

However, the carrier noted that it is still feeling continuing domestic yield pressures, with yields lower than 1H2011. Comparatively, Qantas domestic yields improved in the period. During 1HFY2011, Jetstar reported a 2% reduction in unit cost (flat sector length adjusted).

Jetstar's AUD143 million profit compares with a USD165 million profit at Qantas. Qantas Group as a whole posted a four-fold increase in half-year underlying EBIT to USD453 million (AUD452 million) on revenues of USD7.6 billion (AUD7.59 billion, +10%). This means Jetstar contributed 32% of EBIT and profits and 17% of revenue in the period as the group recovered from one of the worst downturns in aviation history. Like Jetstar, the group's frequent flyer division recorded a record profit.

In terms of capacity, Jetstar increased domestic capacity by 20% and international capacity by 18% in 1HFY2011. This pace is in contrast to Qantas, which expanded capacity by 3.3% with plans to increase capacity by 4.5% in 2HFY2011.

During 1HFY2011, Jetstar handled 8.4 million passengers (+15) as capacity increased 19%. Overall, Qantas Group capacity was up 3% in the six months while growth at Jetstar Asia stood at 46% in the period.

Jetstar is one of the fastest growing airlines in the region, having grown to operate a network covering 52 cities in 17 countries with 379 daily services. The network is serviced with a fleet of 77 aircraft. 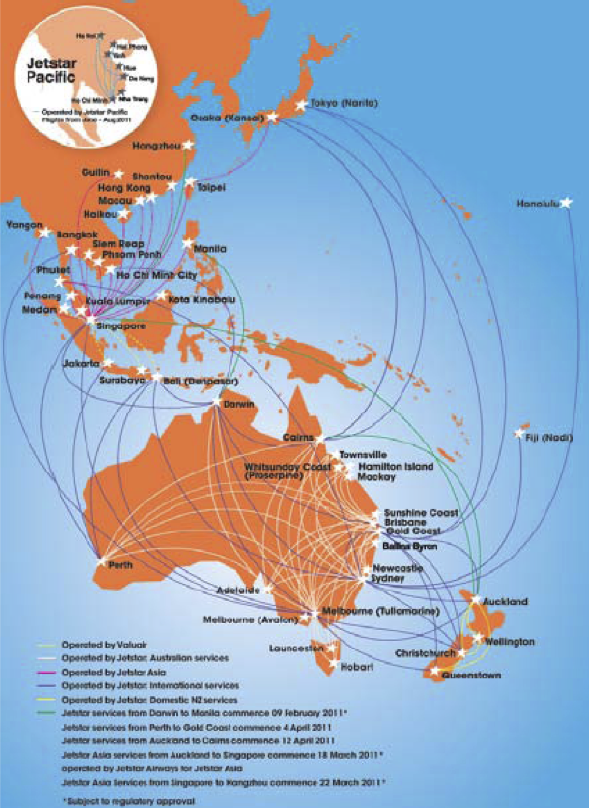 Qantas Group stated Jetstar’s domestic operations have been profitable every year since start-up. The carrier handled 4.9 million passengers in the six months to Dec-2010, a 15% year-on-year increase, with capacity (ASKs) growth of 20%. 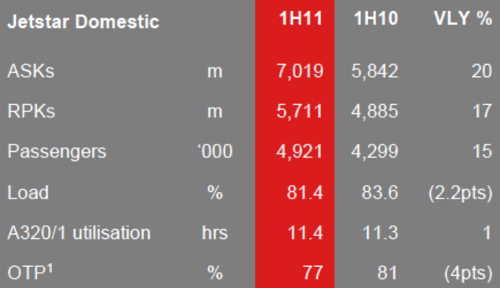 The carrier is targetting capacity growth of 20% also in 2HFY2011 as the group seeks to maintain its 65% "line in the sand" market share in the domestic market, despite increasing competition from Virgin Blue and Tiger Airways. Jetstar plans to continue growth in its core leisure and regional markets, including Gold Coast, Queensland (including Cairns and Sunshine Coast) and Tasmania.

Jetstar Australia is now the third largest carrier internationally to/from Australia, with 8.2% market share, according to BITRE. The carrier reported capacity (ASKs) growth of 12% with double-digit yield improvements in the period driven by strong performance in “key market”.  Passenger numbers increased 8% to 1.5 million in 1HFY2011. 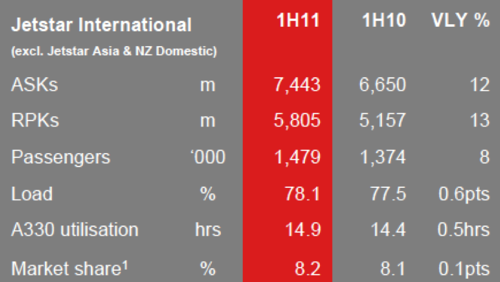 Source: Qantas
1. Based on BITRE data

European and US expansion contingent on B787 deliveries

The carrier added its eighth A320 in Dec-2010 and is scheduled to receive its first B787, which will facilitate long-haul international expansion, in late 2012.

Jetstar CEO Bruce Buchanan, in late Jan-2011, stated the carrier plans to add Europe and the US to its international network once the airline takes delivery of B787 equipment. Athens, Milan, Munich and Rome are reportedly on the shortlist for new European destinations, with the flights transiting via Singapore.

"Europe has always been in our plan as well as North America. A lot of it will depend on fleet deliveries – we are planning to use the 787 for some of those routes and because of the delay in the 787, we are focussing more on the Asian growth opportunities," Mr Buchanan said.

In the meantime, Qantas Group is accelerating Jetstar’s A320 deliveries to enable continued growth in the years ahead. The carrier’s A330 fleet will increase to 11 by FY2012 to consolidate international growth while B787s delivery will support longer-haul international growth from late 2012.

In the New Zealand domestic markets, yields and loads continue to strengthen in second year of operation. A seventh aircraft was added into the market in Dec-2010 with an eighth due in Feb-2011.

Jetstar Asia is also witnessing a strong growth trajectory to become what Qantas claims is the “largest LCC in Singapore and the Asia Pacific”. Jetstar Asia reported “strong” profits in 1HfY2011, with profits “growing quickly” according to Qantas.  Underlying EBIT stood at SGD17 million (USD13 million) in 1HFY2011.

The profitable result was achieved despite 46% capacity growth in the period. Capacity growth is expected to increase at an even faster pace in 2H2011.

The carrier is also increasingly targetting the potentially lucrative Greater China market, with seven destinations served in this region. The carrier stated it sees 200 Chinese destinations as profitable prospects in the next 20 years. Further growth in the region will be facility with the launch of a long-haul A330 base in Singapore.

Earlier in Feb-2011, Mr Buchanan stated the airline would grow more than twice as fast in Singapore as Australia. He added that the carrier would employ pilots and support staff in the LCC’s Asian bases at a faster pace than Australia. The CEO stated Jetstar would not be able to profitably expand under the same wage agreements and costs structures as Qantas, saying Jetstar will need to hire staff on similar terms to Asia-based LCCs to better compete on price.

Jetstar Pacific, meanwhile, is now profitable in “peak months” with the market continuing to growth “rapidly”. The carrier took delivery of a new A320 in Nov-2010.

Jetstar also has ambitious growth targets – both organically and through acquisitions – to assert its dominance in the region.

In Jan-2011, Mr Buchanan stated that the carrier is “in the final stages” of negotiations with more than one Asian carrier to launch an LCC joint venture, with a geographic focus on North Asia. Targetted regions include Japan, South Korea and China, where LCC penetration remains relatively low.

Mr Buchanan stated talks with JAL for the launch of an LCC JV were “progressing”, although he added “things in Japan take some time”.

This month, there have also been reports that Jetstar has expressed interest in acquiring a stake in Indonesian LCC Mandala, which suspended flights in Jan-2011 due to financial. Indonesia’s director general of air transport, Herry Bakti Singayuda Gumay, stated the two airlines were in talks for a possible deal.

Mr Buchanan this month also stated the carrier is “still having talks” over the formation of an airline venture in the Philippines to meet increasing demand in the region. Mr Buchanan declined to name counterparties in the talks but stated the airline has approached the country’s Department of Transportation with a view to launching a JV

Local media reported Jetstar is in talks with food and beverage giant San Miguel about the JV. Jetstar has increased capacity on services to the Philippines from its Australian and Singapore bases more than 200% in the past year.

“We’ve been talking to different partners in the Philippines for two years now, and we’re keeping a watchful eye because it’s one of those ones where there’s 100 million people and it’s well suited to the type of business model we could put in. We’re having many conversations like that throughout Asia. It’s always good to have two, three or four ready to go and then decide which one has greatest chance of success and which to put out limited resources to,” Mr Buchanan was quoted as saying in the Australian Financial Review.

** The Qantas Frequent Flyer results include the impact of the change in accounting estimate, which has contributed AUD82m to the 1H11 result and AUD78m to the 1H10 result.