Qantas Group and Virgin Blue Holdings reported weakened load factors in Mar-2011, as capacity growth exceeded traffic growth at both airlines. Qantas Group reported stronger passenger numbers in the month, driven by growth at its Jetstar operations, with only Qantas international reporting passenger declines in the month. Virgin Blue, now Virgin Australia, on the other hand reported a reduction in total passengers, as has been the trend over recent months, with reductions domestically and in its smaller international operations.

Qantas Group reported a 4.8% increase in passenger numbers in Mar-2011 to 3.7 million, of which Jetstar-branded operations handled 37% of the total. Jetstar domestic handled 795,000 passengers, a 14.0% year-on-year increase, with passenger growth of 9.5% at Jetstar Asia and 5.5% at Jetstar International. Qantas domestic remained the largest segment of the carrier’s operations by passenger numbers with 1.4 million passengers (+0.4%) in the month. 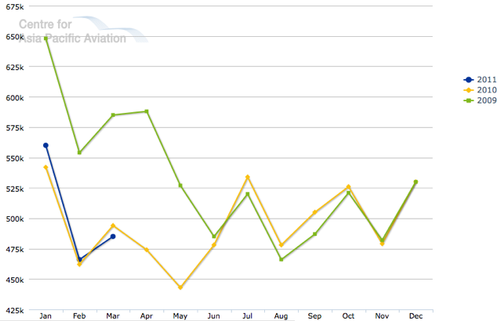 Group traffic (RPKs) increased 3.3%, outpaced by a 7.3% increase in capacity (ASKs) resulting in a 3.0ppt load factor decline to 76.5%. Load factor reductions were witnessed across all the carrier’s airline brands, with the exception of QantasLink, which reported a 1.6ppt load factor improvement to 67.0%. The strongest load factors were reported by Jetstar Asia (78.9%), Qantas domestic (78.4%) and Jetstar domestic (89.0%).  Group load factors have also been weaker in both Feb-2011 and Jan-2011. They were unchanged in Dec-2010 but weaker in the five months between Jul-2010 and Nov-2010. 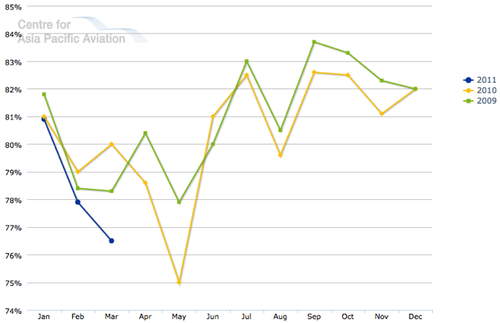 On 19-Apr-2011, Qantas announced increases to international fuel surcharges as a further response to continuing rises in oil and jet fuel prices. Qantas also announced it would increase domestic, regional and Tasman fares by 5% and a fuel surcharge would be added to domestic and Tasman Qantas Frequent Flyer Classic Award redemption seats.

Virgin Blue, now rebranded as Virgin Australia, reported a 5.2% reduction in network passengers to 1.5 million. Passenger numbers in every month so far in 2011 have been below both 2010 and 2009 levels. Domestic operations handled 1.4 million passengers, a 1.2% year-on-year decline with international passenger numbers slumped 27.3% to a considerably-smaller 180,929 passengers. 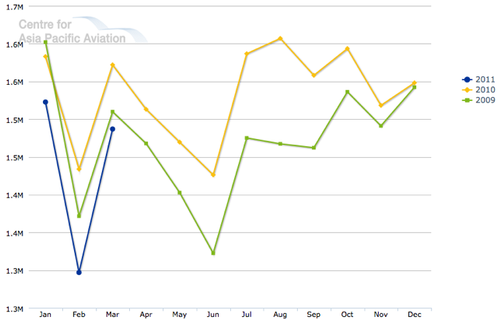 The passenger reductions occurred despite a 3.5% increase in group traffic (RPKs), which was outpaced by a 5.4% increase in capacity (ASKs). This resulted in a 2.2ppt load factor reduction to 76.3%. Domestic load factors weakened 3.1ppts to 80.5% and international load factors slipped 0.6ppts to 70.1%. 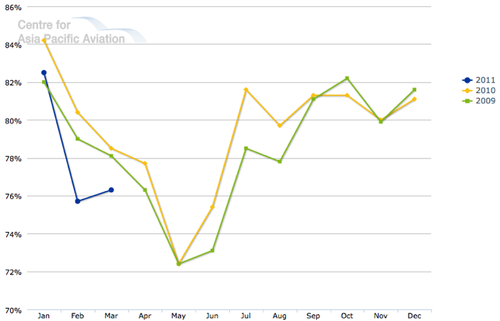 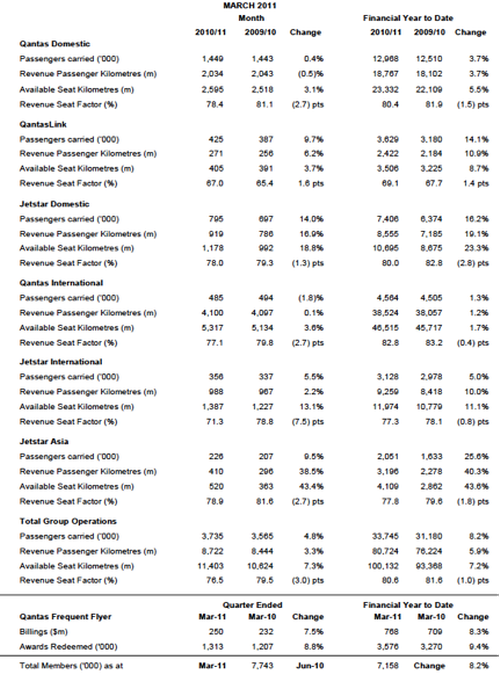 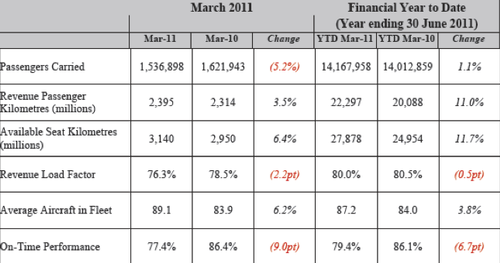