JetBlue is strengthening its network in Boston and New York with new service to Washington DC, to position itself for additional partnerships beyond current deals with Lufthansa, Aer Lingus and American. Barger said he expects to make announcements on these new partnerships in the coming months.

The strategy includes not only the acquisition of the eight Washington National slots from American, part of its new interline partnership with the Dallas-based carrier, but also the five slot pairs from US Airways, part of its slot swap deal with Delta, which is awaiting DOT approval.

Yesterday, JetBlue announced the launch of Washington National service on 01-Nov-2010 with seven daily roundtrips from Boston and single daily roundtrips from Washington to Orlando and Fort Lauderdale. Barger indicated the Boston-National service will not only strengthen its presence in Boston but offer expanded opportunities for new partnerships.

DCA will be JetBlue's 62nd destination. The carrier also serves the region with six daily flights to Washington Dulles International Airport (IAD) and five daily flights to Baltimore/Washington International Thurgood Marshall Airport (BWI). With the addition of DCA's seven daily shuttle flights to Boston, JetBlue will become the largest carrier for flights with 18 departures between Boston and the Washington DC, the fourth largest market in the US in terms of revenues.

Despite the fact it deferred new A320 deliveries from 2011/2012 to 2015 (as part of an effort to reduce costs by deferring pre-delivery deposits), the new Washington service, as well as its new Hartford service to Orlando and Fort Lauderdale require additional aircraft. To that end, it is leasing, on "very favourable terms", seven used A320s it formerly owned in a deal with GECAS which is overhauling the aircraft before returning them to the JetBlue fleet.

Barger does not expect the additional aircraft to add more than a half a percentage point to capacity with the bulk of capacity increases coming from increased aircraft utilisation and the annual run rate for new services added in 2009. Three of the GECAS aircraft are expected in June followed by two in the third quarter and two in 4Q2010. It is also expecting to benefit from a maintenance holiday with these aircraft, which CFO Ed Barnes indicated fit will with its free-cash flow strategy for the year. He expects them to be accretive to free cash flow.

Its on-going conversion to Sabre is also part of its 'gain-new-partners' strategy, offering more functionality, but also increased opportunities for increasing ancillary revenue.

“We will use Sabre’s E-ticketing platform to leverage our growing presence in Boston and JFK,” said Barger. “Sabre, our new terminal at JFK, strong network, superior product, low costs and our valuable JFK slot portfolio means we are well positioned to serve the global carriers. The new partnership with American is an innovative and cost-effective way to general new revenue by leveraging the network strengths of both carriers while bolstering each airline’s New York and Boston presence. We will continue to develop opportunities to monetize our valuable presence in New York and Boston by linking our network with other airlines.”

Barger indicated its position in Boston will be further strengthened this summer as competing capacity declines during the second and third quarters on a year-on-year basis. “We are increasing Boston departures by 30% year on year this summer, accounting for about 4.5 percentage points of our 2010 ASM growth,” he said. 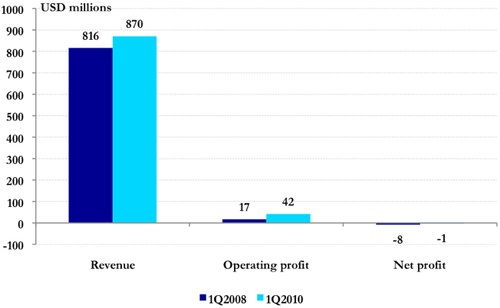 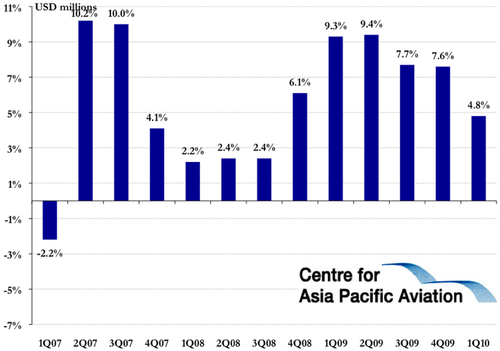 He reported that the company ended the quarter with over USD1 billion in unrestricted cash and short-term investments or 30% of trailing 12 months revenue, which, he claimed, was the best liquidity in the industry. Its average fare of USD142 one way was the second highest quarterly average fare in its history, driven by an increase in higher yield passengers and the improving revenue environment.

Barger also reported increasing strength in the company’s Caribbean and Latin American operations, adding that its VFR – visiting friends and relatives – program paid dividends in the March quarter because JetBlue benefits more than its peers from the Easter/Passover/Spring break travel bump. For the second quarter, Caribbean and Latin America capacity will rise 20% year on year, accounting for 3.5 points of expected 2010 ASM growth.

Turning to the closed Bay runway at JFK, Barger said repairs will be completed by 01-Jul-2010 and will alleviate many of the challenges of operating at the airport. He reported minimal impact so far, with the project half completed.

Barnes reported that the airline was forced to cancel 1,300 flights during the quarter, up from the 550 cancelled in the year-ago quarter, the vast majority on the February storms. It took a USD15 million hit in lost revenues which were offset by USD5 million in reductions for fuel and landing fees, for a net impact of USD10 million.

The airline also incurred a one-time expense of USD15 million on the Sabre conversion compounded by a USD8 million in lost revenue resulting from flight load caps, fee waivers and schedule adjustment made to ensure a successful cutover. Coupled with fuel increases, these additional costs drove a USD31 million year-on-year decline in operating income.

Monthly PRASM improved 3% for the quarter after being down in January, up 2% in February and 15% in March on higher yield passengers as well as the holiday period, which accounted for 2.5% percentage points of the first quarter PRASM. Barnes also reported yield traction for short-haul business traffic since the Sabre cutover. The company is now testing variable pricing on its Even More Legroom offering. Previously, he said, JetBlue was restricted to pricing by segment length of haul whereas, now, it is setting unique EML prices for different markets to match price with demand. The company expects the EML changes to drive USD20 million in additional ancillary revenue on an annual basis. 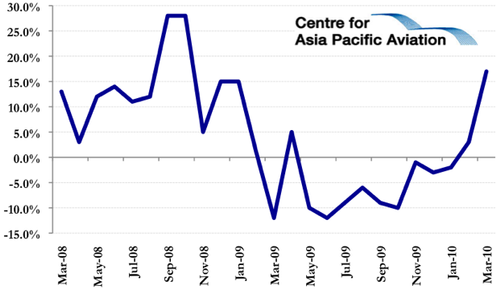 That would make up for the ancillary revenue losses incurred from the weather cancellations and Sabre conversion as the airline waived or lowered change fees. Even so, it reported that ancillary revenues, reported in the passenger revenue column, combined with other revenue totaled USD18 per passenger in the quarter. Full year ancillary revenues are expected to increase 10% year on year. It expects to roll out buy-on-board initiatives in the second half.

"While we are disappointed to report a loss for the quarter, we are confident that we are taking the right steps to return to sustained profitability," said Barger. "During the quarter, we successfully implemented a new customer service and reservations system - a significant accomplishment given the complexity of such a transition - reflecting meticulous preparation and execution by our outstanding crewmembers. We believe this new system, along with our growing presence in Boston and our unique position as the largest domestic carrier at JFK Airport, allows us to continue to grow and develop revenue streams in the future."

Revenue passenger miles for the first quarter increased 7.1% to 6.5 billion on a 6.1% increase in capacity, resulting in a first quarter load factor of 76.8%, an increase of 0.8 points year over year.

Operating expenses for the quarter increased 15.1%, or USD108 million, over the prior year period, including approximately USD15 million in one-time expenses related to the transition to Sabre. JetBlue's operating expense per available seat mile (CASM) for the first quarter increased 8.5% year-over-year to 9.83 cents. Excluding fuel, CASM increased 8.9% to 6.81 cents. These non-fuel unit costs were negatively impacted by storm related flight cancellations that occurred in February and March. 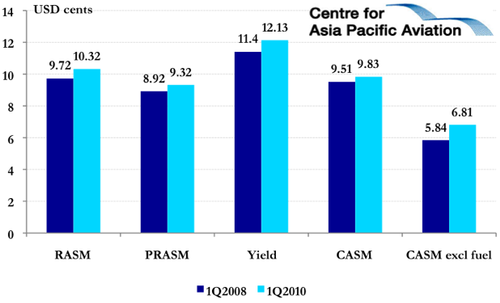 JetBlue has hedged approximately 42% of its second quarter projected fuel requirements and 38% of its remaining 2010 projected fuel requirements with a combination of crude call options, jet fuel swaps and heating oil collars. JetBlue expects an average price per gallon of fuel, including the impact of hedges and fuel taxes, of USD2.43 in the second quarter and USD2.44 for the full year 2010.

"We are encouraged by recent revenue trends as the economic environment appears to be improving and we derive additional revenue benefits from our new customer service system," said Barnes.