JetBlue to keep going on its own; FedEx sees 'solid' shipments to US

North and South American airline shares rose on Tuesday (28-Sep-2010), moving with wider markets. The Dow (+0.4%) was up after investors saw poor home prices and consumer confidence data as a sign that the Federal Reserve may introduce new stimulus.

JetBlue to keep going on its own

JetBlue (+2.6%) gained after CEO, Dave Barger, stated the carrier has no plans to merge with another airline, in response to news yesterday that Southwest Airlines (-0.8%) will acquire AirTran (-0.1%). Mr Barger stated the LCC's present growth strategy of going on its own “has proven to be the right path forward” and a merger would only distract it from its goals. The CEO added JetBlue could “easily double our size overnight, but at what cost to our balance sheet, our culture and brand? We've worked too hard for those assets”.

Southwest Airlines CEO Gary Kelly, stated during trading the proposed merger with AirTran will increase Southwest’s current route network by 25% and will open up destinations including Atlanta and Reagan National Airport as well as adding 8,000 employees to the carrier’s workforce. Mr Kelly also stated the carrier is readying itself to launch international services in three to four years time.

JetBlue also gained after Barron’s described JetBlue as a diamond in the rough the day prior. The analysts commented that the carrier’s shares could rise as the airline’s profit gains over the next few years.

FedEx reports 'solid' shipments to US

FedEx (+0.8%) was also up. CEO Fred Smith stated during trading that the company is seeing "solid" shipments to the US, signalling improved conditions in the lead-up to the end of the year. Shipments are being fuelled by retail inventories that are close to record lows at the current sales pace.

US Airways (-0.5%) slipped despite AirlineFinancials.com predicting the carrier will report an all-time record quarterly profit at USD225 million from USD3.2 billion in operating revenue. 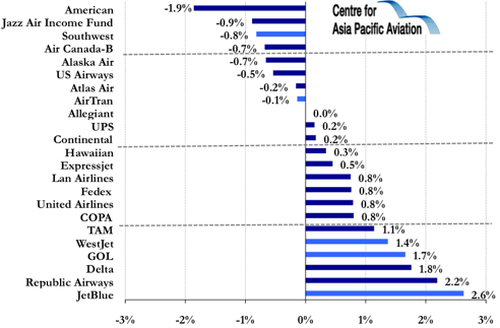