JetBlue profits in quarter and year

JetBlue was facing one of its most challenging tasks as it spoke with analysts yesterday with the cutover from its old Navitaire system to Sabre, which, while an exciting opportunity promising increased revenues, has caused huge problems with other carriers. Canada’s WestJet comes to mind. However, CEO, President and Director, David Barger, noted training, additional staff and capacity adjustments this weekend should mean the migration goes smoothly.

JFK out, Boston in

On the heels of the transition will be the airline’s 10th anniversary on 11-Feb-2010, followed by another challenge – the 120-day closure of a runway at JFK, during which time the FAA has relaxed use-it-or-lose-it slot rules and airlines have scaled back scheduling. For its part, JetBlue will lose 10% of its departures and plans to redeploy capacity to its growing Boston operation which has surpassed all expectations. Indeed, Boston is a hallmark of JetBlue’s philosophy – even at a time when most airlines are cutting back or retrenching, JetBlue will move heaven and earth to take advantage of opportunities that present themselves.

Finally, it will make a decision by the end of the quarter whether or not to retain a New York headquarters, with 800 employees or consolidate its Forest Hills and Darien, CT facilities, with 1,000 employes, in Orlando. Leases on the two northern facilities expire in 2012.

“We’ve been very, very pleased with interest from New York officials and from Orlando officials,” said Barger. “We have a large operation in Orlando with our training centre. At the same time, we have a lot of history here and its core to the brand from the standpoint of our commitment to our operational center here at Kennedy.”

The cut over to Sabre is expected to increase costs by USD10 million in 1Q2010. It is planning for some disruption and delays, said Barger, adding the company has developed a Verizon teleperformance call centre for standby to take calls should it be needed. The transition includes significant improvements to the website, as well as a new revenue management system, expected to increase revenue-generating possibilities.

“Transitioning to this new platform offers us the flexibility and robust tools to expand the products and services we offer our customers,” said Barger. “As a result, we believe the system will help improve the overall customer experience and further enhance the JetBlue brand. When fully implemented, the Sabre system will provide pricing flexibility that will enable us to attract more business customers, broaden ancillary revenue opportunities, and facilitate airline partnerships, all core initiatives for JetBlue.

Closure and repair of Bay Runway 31 Left, 13 Right at Kennedy will take place between 01-Mar-2010 and 30-Jun-2010 and is expected to improve overall operations at the airport. Barger indicated it the reduced capacity will have a positive effect on RASM.

He was also pleased to report that the company generated positive free cash flow for the first time in its history.  The company had scaled back its growth, "playing defense", as Barger put it, since 2006. Its 36-aircraft delivery schedule was scaled back to nine and the company renegotiated the delivery schedule for all of its Embraer 190, stretching them out to 2018. The deferrals, along with liquidity moves, capacity reductions, capital expenditures and network optimization, combined with a USD450 year-on-year decline in fuel, helped JetBlue achieve its highest net income since 2003.

JetBlue finished the year carrying 22.4 million passengers, an increase of 2.4% year-on-year. During the fourth quarter passengers rose 6.8% to 5.5 million.

Since 2006, the airline has deferred over 80 aircraft. Now, Embraer has agreed to defer delivery of 16 ERJ 190s originally set between 2012 and 2016, out to 2017 and 2018. Even so, JetBlue is accelerating delivery of four ERJ 190s into this year from 2012. Two will be in the second quarter, one in the third and the fourth will come in 4Q2010 which will bring the airline’s fleet to 155. Barger reported financing was in place for the 190s which will be added to the nine aircraft the company accepted in 2009.

ASMs with last year’s deliveries, however, remained flat versus 2008 largely on lower aircraft utilisation which was down 5% year on year. Still, Barger reported JetBlue had one of the highest aircraft utilization rates in the industry. JetBlue is also expecting about 20 A320s in 2011 and 2012.

“Shifting the new aircraft delivery dates allows us to spread our fleet growth out more evenly between 2010 and 2018,” he said. “Even with the addition of these four E-190s, we expect to generate positive free cash flow in 2010. We expect approximately USD395 million in capital expenditures during 2010 compared to roughly USD400 million in 2009. Lower Cap Ex is critical to our goal of consistently generating positive free cash flow. At the same time, we do need to continue to make strategic investments.

Total revenues dropped 3% year-on-year, while unit revenues were down by 3.5%. Barger said load factors held steady, which, coupled with ancillary revenue growth moved to offset the fare weakness. Ancillary revenues grew USD60 million or 17% last year, compared to 2008, driven by having 'Even More Legroom' for an entire year, which generated USD70 million.

With the addition of eight new cities last year, six of which were in the Caribbean and Latin America, it expects 25% of the airline’s ASMs will be in that market in 2010, with another 30% in the hotly contested trans-continental market where 14% of its routes are in competition with Virgin America.

ASMs in Boston will grow between 5-7% in 2010, while the full-year impact of new routes added last year, particularly in the longer haul Caribbean markets, is expected to equal two to three points of that ASM growth. Otherwise, the rest of the network will shrink in 2010.

“We have to earn our right to grow,” said Barger. “Again, focusing on free cash flow, allows us to grow and I think as we look at the future, I think that this is an airline that can grow 5% per year. Certain years we’re going to be afforded the opportunity to maybe grow more than that but the flexibility with our crew members, with our order book, also allows us to dial it down like we did last year. We were flat last year and I think again it’s one of the best performances this company has had in the last 6+ years. But this is a growth company and we’re running the business that way.”

Operating margin for 4Q2009 was a very respectable (for an airline) 7.6%, but the LCC has work to do to get to the 9% margins enjoyed earlier in the year. 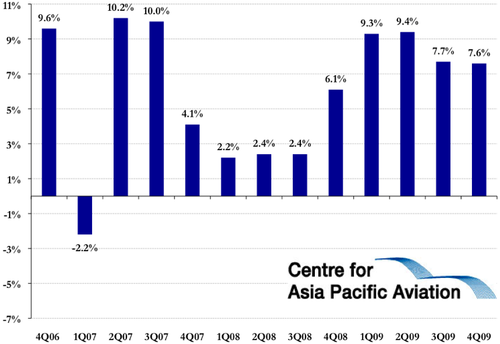 Fourth quarter unit revenues declined 4% compared to a year ago, which Barnes called a "significant improvement" from the 8% year-over-year decline experienced in the 3Q2009. Yield was down 5% and load factor was up about 1% on a 6% more capacity. 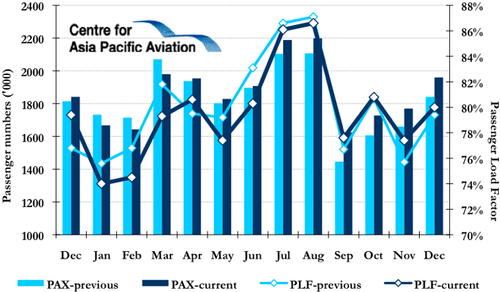 Barnes reported that ancillary revenues – combining those in passenger revenue with other revenues – reached USD20 million in the quarter. Fourth quarter CASM, down 5%, benefited from lower fuel prices. The price per gallon declined 24% year on year. Even so, it still represented 30% of total operating costs during the quarter. In 2010, ancillary revenues are expected to increase approximately 10% year-on-year. The airline is studying supplying food on board, but doesn’t anticipate that will have an appreciable impact on ancillary revenues.

Sabre will afford ancillary revenue streams through the book flow, said Barnes, and the ability to optimize such things as package travel. “We’re really excited about the capabilities Sabre gives us as we look into 2010 and beyond,” he said.

Fourth quarter unit costs, ex fuel, rose 6% year on year as coming from increase salaries and maintenance expenses. Pilots gained a pay increase in June-2009 last year, as well as additional staffing for the Sabre transition accounted for an 8% increase per ASM. During the quarter, staffing for Sabre amounted to USD4 million.

Even as the airline boasted of its young fleet, ageing, increases in heavy maintenance and warranty expirations increased maintenance expense for ASM by 20% year-on-year. Maintenance costs will continue to rise, said Barnes.

The airline's other expenses also took a double digit increase – 15% – on the Sabre implementation, with another USD8 million associated with aircraft sales during 4Q2008, negatively impacting its year-on-year comparisons.

Barnes reported that JetBlue is positioned to generate positive free cash flow and maintain "strong" liquidity in 2010. "We expect to end the year with cash as a percentage of trailing 12 months revenue of at least 25%", he said, adding, "we continue to work hard on the cost side while at the same time making prudent investments in our business'. Full-year RASM is expected to be between 5-8% year-on-year. 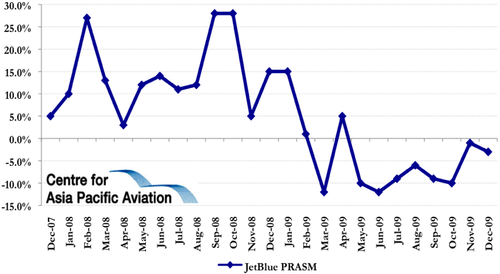 First quarter expenses will include a USD3 million increases in wages and benefits and another USD7 million for other operating expenses. However, cost increases will be offset by increasing revenue in 2Q2010.

Overall, the results were solid, though investors are becoming more pessimistic on the sector generally, on rising costs and concerns about future revenue growth. JetBlue's stock was sold off heavily in trade yesterday.