jetBlue Airways praised by analysts and rating is upgraded, but 1Q2016 unit revenue is pressured

jetBlue Airways has undergone numerous changes during the last couple of years ranging from a high level CEO change, to the introduction of its Mint premium product, to the marketing of new fare bundles that are expected to help lift the airline’s overall revenue performance in 2016. The company has also significantly strengthened its balance sheet during that time, decreasing its leverage ratios by more than half since 2011.

jetBlue’s strategy for combating unit revenue weakness is adjusting capacity in underperforming markets. If current pricing pressure lingers into 2H2016 the airline has stated that it would adjust its capacity in shoulder periods. But for now, jetBlue’s 2016 capacity growth of 8.5% to 10.5% remains unchanged.

Since 2014 jetBlue has made significant changes to the business, including naming a new CEO (former company president Robin Hayes). The airline has outlined plans for a seat densification programme on its Airbus A320 (150 to 165 seats) and core A321 (190 to 200 seats) fleets, introduced a premium product – Mint – on transcontinental flights from New York, and introduced new fare classes.

It is a dizzying array of changes, but overall the adjustments have been largely positive. Mint has outperformed the company’s expectations. Recently, Mr Hayes told investors that there is an extremely high paid load factor for the product, and perhaps Mint offers a broader opportunity than jetBlue originally anticipated. The airline began operating A321s featuring Mint cabins on certain flights from New York JFK to Aruba and Barbados in late 2015, and Mint flights from its Boston focus city to San Francisco are debuting in Mar-2016, followed by Mint flights from Boston to Los Angeles beginning in late 2016.

jetBlue plans to begin its cabin retrofit of 130 A320s beginning in mid-2016, and has stated that the extra seats should generate USD100 million in incremental operating revenue by CY2019.

Source: CAPA Fleet Database
Orders include those placed directly by the operator and by lessors assigned to the operator, from 22-Mar-2016 onwards.

The company debuted its fare options – Blue, Blue Plus, and Blue Plus – in mid-2015. Those options offer varying degrees of flexibility. For example, Blue, the most basic and least expensive option, requires passenger to pay for checked bags as an extra.

jetBlue has estimated that the fare products should generate an annual run rate of USD200 million in revenue during 2016, one year earlier than the company originally expected.

Even as the unit revenue environment is weak for most US airlines in early 2016, jetBlue believes that the benefits from its fare families, and USD60 million in operating income that it expects to gain from a new credit card agreement, should lift its top-line revenues for the year.

After sustaining a positive passenger unit revenue performance of 0.7% for 2015, jetBlue is forecasting a decline in total unit revenue of 7% to 8% in 1Q2016. The airline is no longer reporting specific PRASM and instead only report unit revenues, which includes ancillary sales and other revenue.

jetBlue was shielded from the main pressures that drove passenger unit revenues for the US majors downwards in 2015 – f/x forces created by the appreciation of the USD against most major currencies, and pockets of domestic pressure – largely in Dallas and Chicago. United also endured pressure at its Houston Intercontinental hub, which was driven by depressed demand from the oil and gas sector. Being somewhat protected from these impacts allowed jetBlue to achieve a unit revenue premium over most airlines throughout 2015, but it appears that overall pricing for US airlines remains soft in 2016.

Investor concern about continuing pressure on unit revenues is driving down the stock valuations of many airlines. jetBlue’s highest trading price in 2016 was USD22.30 in late Feb-2016, before falling to USD20.31 in mid Mar-2016 after it released 1Q2016 unit revenue guidance. 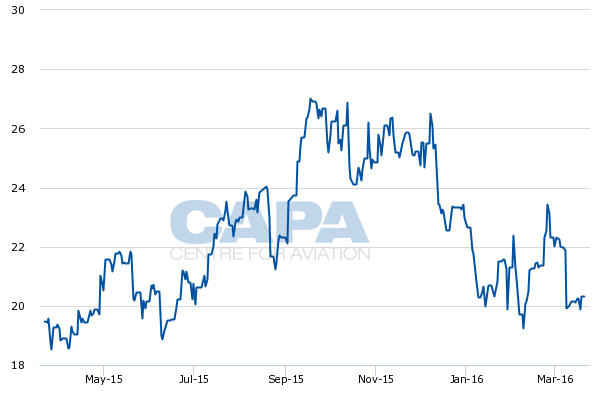 See related report: The Big 3 US airlines work to bolster their sagging valuations; the investor base is sceptical 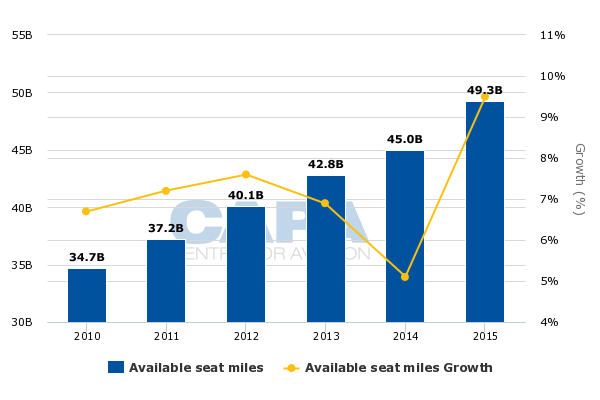 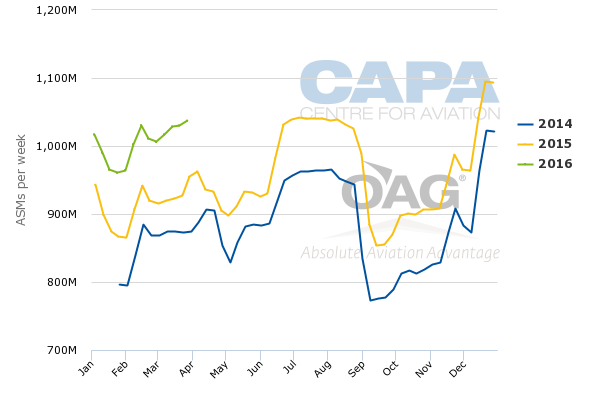 jetBlue has also pulled capacity from underperforming markets, said Mr Hayes, including Colombia and Puerto Rico. Mr Hayes stated that the adjustments were not in response to the Zika virus, and the virus is not having an effect on JetBlue’s unit revenue performance. For a couple of weeks during the height of the Zika hype passengers cancelled flights and vacations, but JetBlue’s CEO has stated that bookings to Latin America have rebounded.

Mr Hayes remarked that if pricing pressure lingers into 2H2016, JetBlue would examine making adjustments to capacity in the shoulder periods of lower demand.

After jetBlue issued its 1Q2016 unit revenue forecast, the ratings agency Fitch upgraded the company’s credit rating. The upgrade was driven in part by improving credit metrics, the airline’s strong unit revenue performance, and by debt reduction. Fitch stated that jetBlue’s debt reduction in 2015 had exceeded its expectations.

JetBlue has forecast debt payments of USD454 million in 2016, which includes the final maturity of a double-enhanced equipment trust certificate (EETC) issued in 2004.

Fitch also believes that jetBlue has a strong liquidity balance, which at YE2015 included a cash balance of USD318 million, short term investments of USD558 million and an undrawn revolver of USD400 million. Combined, those amounts represented 20% of jetBlue’s trailing 12M revenue, which the agency stated was sufficient to meet the airline’s needs.

For the time being jetBlue is focused on further strengthening its balance sheet, given its debt maturity profile in 2016. In 2015 the company spent USD227 million to repurchase 9.8 million shares, but additional shareholder rewards appear to be farther out on the horizon as jetBlue works to maintain favourable leverage and drive its debt lower.

CAPA has previously warned that the largest question facing jetBlue in 2016 is whether the airline could avoid the pricing dilution that plagued other US airlines in 2015. A number of factors have coalesced to create unit revenue pressure for the airline in early 2016, including some challenges with typically larger close-in yields. jetBlue is obviously not satisfied with its unit revenue performance but has stopped short of declaring any intention to adjust capacity targets, for now.

The airline has taken advantage of lower fuel prices to advance its efforts of decreasing leverage, paying off debt and generally working to create a sustainable, stable balance sheet. The continued strengthening of jetBlue’s financial metrics should potentially lay the groundwork for a lifting of shareholder rewards in 2017.