jetBlue Airways, armed with its premium product Mint, is poised to disrupt the trans-Atlantic market

Periodically throughout the last few years jetBlue has hinted that long haul trans-Atlantic flights could be a possibility at some point in its evolution. But in mid-2016 the company took a more concrete step towards serving trans-Atlantic routes by altering its Airbus order book – potentially to support long haul expansion.

JetBlue’s decision to option the Airbus A321LR occurs at a time when airlines such as WestJet, Norwegian Air Shuttle and WOW Air are pushing the low cost model into the long haul international market. Perhaps the steps those airlines are taking to carve out the low cost niche in the long haul space has accelerated jetBlue’s evaluations of trans-Atlantic service. The company has declared that it would make a decision about its options for the long-range Airbus narrowbody in 2017 ahead of the narrowbody’s debut in 2019.

The biggest drivers for jetBlue’s decision to enter the long haul trans-Atlantic market are identifying routes where it can inject low fares to stimulate traffic and drive revenue. The company’s base in Boston is emerging as the epicentre for those potential opportunities.

During the past couple of years, while JetBlue has been developing and eventually expanding its premium Mint product featured on a special subfleet of Airbus narrowbodies, WOW Air, Norwegian Air Shuttle and WestJet have ushered in the low cost model on trans-Atlantic routes.

Although Norwegian Air Shuttle and WOW Air still only represent a small portion of seats between the US and Western Europe, WOW Air’s seats have more than doubled during the past year, and Norwegian’s have increased 50%.

Canada’s second largest airline WestJet debuted its nonstop long haul flights with Boeing 767 widebodies from several Canadian destinations to London Gatwick in May-2016. The service consists of year-round flights from Calgary and Toronto and seasonal routes from Vancouver, St John’s, Edmonton and Winnipeg to Gatwick.

WestJet’s service debut to Gatwick was shaky, driven by maintenance problems with its 767 widebodies, but the airline has moved past those operational challenges. The airline maintains that the service is accretive to its bottom line, and it is in the market attempting to obtain additional widebodies for expansion.

None of the other new entrant airlines offers a premium flatbed seating option – something that has distinguished jetBlue during the past couple of years in the US domestic market.

Mint was conceptualised by jetBlue as a mechanism to capture revenue that it was losing to competitors on key and competitive US transcontinental markets between New York JFK and San Francisco and Los Angeles. In Apr-2016 jetBlue executives stated that its routes between New York JFK and Los Angeles and San Francisco during the past 12 months had generated double-digit revenue each month. During early Apr-2016 jetBlue increased Mint fares in those markets by between USD25 and USD75.

jetBlue has expanded Mint from Boston and plans to add Mint flights from its base in Fort Lauderdale; it plans to grow its Mint subfleet from 11 A321s at YE2015 to 26 by YE2017.

It is not far-fetched to conclude that Mint’s success could be replicated in the trans-Atlantic space, since jetBlue could position its product between the higher-priced offerings of more traditional airlines and the lower-end offerings of the current low cost operators in the market.

jetBlue executives recently stated that it saw some of the same characteristics in the trans-Atlantic market as in US transcontinental routes – limited competition and higher fares.

In Jul-2016 jetBlue placed an order for 30 incremental Airbus A321s, 15 of which can be converted into the A321LR that features a range of 4,000nm. The A321LR can reach several destinations on the edge of Western Europe from the US East Coast, including London, Manchester, Bristol, Belfast and Dublin.

Source: CAPA Fleet Database.
Orders include those placed directly by the operator and by lessors assigned to the operator, from 29-Sep-2016 onwards.

jetBlue has cited the capacity concentration of the large three global alliances across the Atlantic as one possible driver of the lack of lower fares in those markets.

Data from CAPA and OAG for the week of 26-Sep-2016 show that members of SkyTeam, Star and oneworld control 72% of the seats on offer between the US and Western Europe, with the bulk of that capacity controlled by immunised joint ventures among members of those alliances.

Seat share of the three alliances between the US and Western Europe: 26-Sep-2016

The company singled out its Boston base – which is jetBlue’s second largest by seat deployment – as a potential launch pad for its trans-Atlantic service. Airline executives highlighted several important business markets across the Atlantic from Boston that feature high fares. 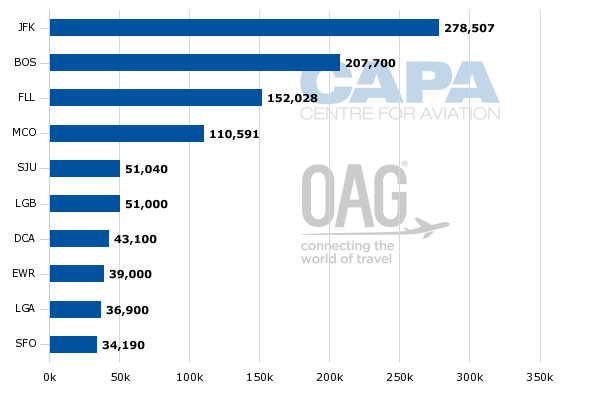 Boston is a natural choice for jetBlue’s trans-Atlantic service. The company is the airport’s largest airline, with a 24% seat share, and has worked to build its roster of corporate clients in the market. 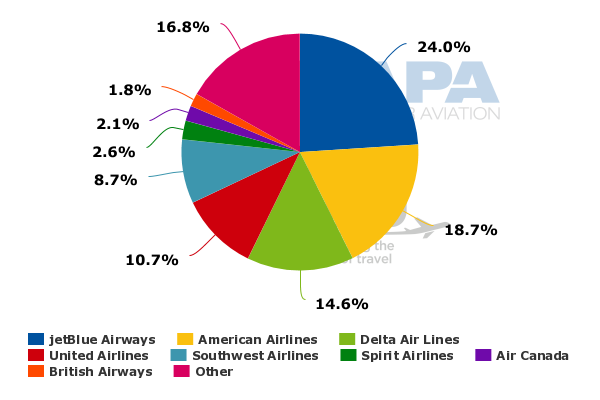 jetBlue could easily enter the Boston-London market with service to Gatwick – a route presently served by Norwegian. Aer Lingus operates flights from Boston to Dublin and Shannon. jetBlue and Aer Lingus already codeshare on Aer Lingus’ flights to Europe and on jetBlue’s beyond network from Boston. It is not clear whether the codeshare would remain intact if jetBlue launched service to those Irish markets but Aer Lingus, which is now part of the IAG Group, could benefit from additional feed from jetBlue.

Obviously jetBlue will have to consider the effects of the Brexit vote as it evaluates service to London. WestJet executives recently stated that to the extent the GBP has weakened, that puts some pressure on UK point of sale.

However, WestJet is the only North American LCC operating from Canada on routes in the North Atlantic; and its fares are lower than incumbent airlines; and if UK-originating passengers become more price-sensitive – it could be a plus for WestJet.

Paris is also within the A321LR range from Boston and is served by American and SkyTeam joint venture partners Air France and Delta. Paris could be a promising market for jetBlue’s mid-tier product that smaller corporate customers could find attractive.

jetBlue could also deploy some of the A321LRs on routes deeper into South America, and by the time it will have received the jets (2019) the region’s economic climate should be in recovery mode.

An aircraft that fits into its existing fleet doesn’t carry the financial burden of widebody jets at a time when jetBlue has vastly improved its leverage ratios during the past couple of years. Its year-end net debt to EBITDAR ratio dropped from 4.1x in 2011 to 1.1x in 2015.

jetBlue is also no doubt closely studying the movement of other LCCs in the trans-Atlantic space to gauge the reception the model is receiving in the market; this could determine how big the opportunity could be for its differentiated product.

With Mint, jetBlue could serve as potential disruptor in the trans-Atlantic market

Although jetBlue is taking extreme care to stress it has not made a decision about exercising its options for the A321LR, the airline appears bullish on potential opportunities for its niche product across the trans-Atlantic. While the other LCCs on the route do have forms of premium seating, none has a lie-flat product of the quality of jetBlue's, a serious challenger to the incumbents' premium models.

Armed with its Mint premium product, jetBlue could prove to be a serious disruptor in a market that could use an injection of fresh thinking.