Meanwhile, Jet Airways, which has reported a 27% reduction in domestic traffic in May-2009, shares suffered the largest declines of 5.5%, followed by Virgin Blue, with a 4.4% reduction. The LCC today announced a new interline agreement with Emirates and stated it expects to soon announce an agreement with Delta Air Lines covering their respective domestic networks. The announcement follows news from Qantas earlier this week of plans to expand its codeshare agreement with American Airlines, while also boosting trans-Pacific services in preparation for the launch of Delta Air Lines services on the route.

Also in the South Pacific, Air New Zealand's fares slipped 3.8%, coinciding with the release of the carrier's May-2009 traffic results. The carrier reported a 9.9% reduction in passenger numbers and continued deterioration of yields in the month, despite a hefty reduction in capacity. 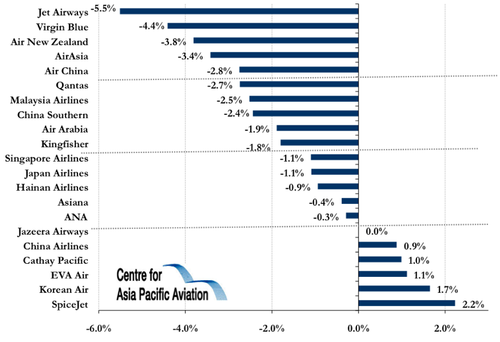