Jet Airways’ shares slipped 1.1% yesterday, as the airline's Executive Director, Saroj K Datta, cautioned that “yields show no signs of improving, and so long as revenue for passengers is low, it will be difficult to come back to profitability”.

Mr Datta added that the carrier “may break even, but only for a short period”. Indian airlines are facing over-capacity in the Indian aviation market, which has further pressured yields and profitability.

In South Korea, Bank of America Merrill Lynch yesterday reiterated its 'buy' rating on Korean Air (shares down 0.5% yesterday) and raised its price target by 9%.

Bank of America Merrill Lynch stated that Korean Air is seeing a faster traffic recovery than regional rivals, as passenger and cargo returned to positive growth in September due to its Asian focus”, adding, “we look for a steady recovery aided by currency effects."

Also in China, China Eastern’s shares were down 3.9% yesterday, as UBS reiterated its ‘sell rating’ for the company. UBS also adjusted the target price of China Eastern's H-shares from HKD1 to HKD1.30. 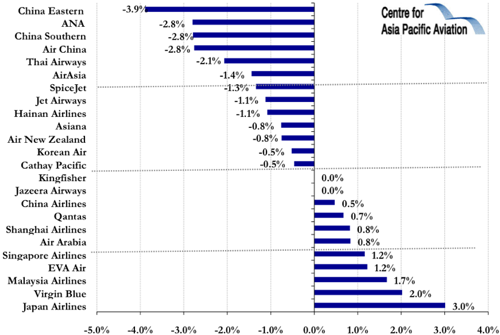