India's Jet Airways’ shares were up by 7.0% yesterday. Separately, Executive Director, Saroj Datta, stated the carrier’s unit cost per available seat kilometre (CASK) is USD 1.3 cents lower than CASK of LCCs in the domestic market, with the carrier currently “working to bring it down further”.

On the other end of the market spectrum, shares in Kingfisher and SpiceJet slipped, both by 5.9%, as the Indian market continues to be challenging.

Also gaining strongly yesterday was Hainan Airlines’ shares, which gained 3.0%, after increasing by 16% in the past seven days of trading (while the market decreased by 1%), due to speculation, which has since been denied, that China Southern is interested in taking over Hainan Airlines.

According to the reports, China Southern would merge with Hainan Airlines, with the support of SASAC, and with Singapore Airlines taking an ownership position in the merged carrier.

Korean Airlines to raise USD423 million through sale of securities

Also in North Asia, Korean Air’s shares price slipped 2.7%, as the carrier announced plans to raise KRW500 billion (USD423 million) through the sale of securities backed by future ticket sales. The South Korean carrier plans to sell the securities this month to raise funds to support continued operations in 2010.

He added, “the market is continuing to grow but it’s a matter of price. The yields are very poor. But the Tasman is an important market for us, it’s our largest international market, and we’ll continue to work hard at it”. He continued, stating, “at the moment the market is awash with capacity. There are nine carriers on the route. It is a very tough market”. 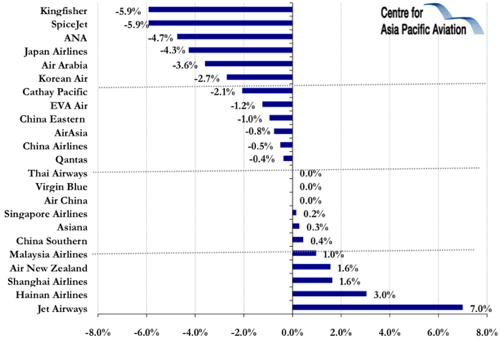