Jet Airways has budgeted for a positive second quarter, with trends for domestic operations “strong” though reflecting seasonality and international seat factors “very strong”. This outlook comes as the airline improved profitability at the EBITDAR level in the three months ended 30-Jun-2010, the first fiscal quarter for 2010/11. Jet also returned its after tax result to a profit, compared to a sizeable loss in the same period last year. 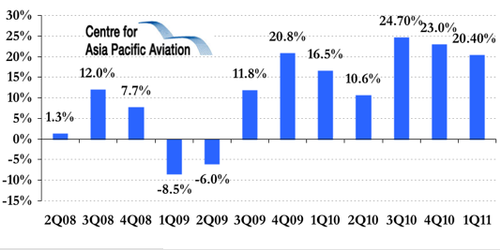 Jet Airways stated Indian traffic has shown a reviving trend over the past few months, with airlines achieving high seat factors and yield growth. The carrier added Indian GDP growth of 8.5% forecast for the year indicates a reviving economy, with effects to continue to be seen in domestic aviation market. Jet stated it is seeing a premium demand revival and this is expected to continue over the next few quarters. 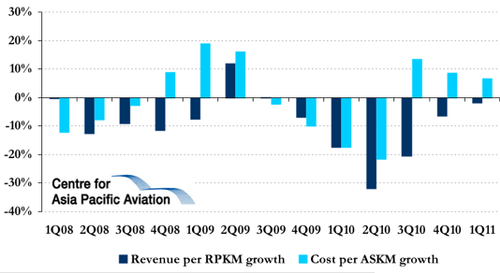 Systemwide passenger traffic (RPKMs) increased 32.7% year-on-year in the quarter, while capacity (ASKMs) increased at a slower rate by 22.1%, translating into a higher seat factor of 79.7% (+6.3 ppts year-on-year). 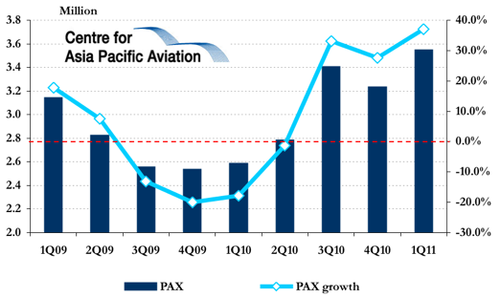 Domestic and international seat factors up 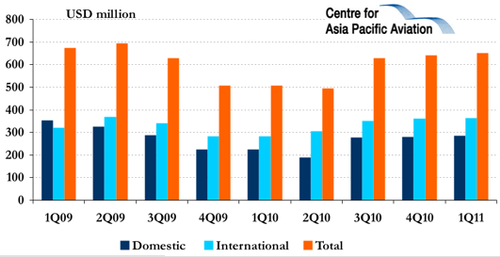 International operations accounted for 56% of total revenues (USD363.1 million) in 1QFY2010/11 and achieved a seat factor of 80.1%, which is 3.6 ppts higher than the same period than last year. EBITDAR margin was lower at 21.5% versus 22.3% in 1QFY2009/10. Jet stated this result includes a negative impact of aircraft on ground of USD8.4 million and volcanic ash incidents in Europe, which resulted in a revenue loss of USD7.2 million.

International yields (revenue per RPKM) rose 2.9% in the period to 5.92 USD cents. Jet missed its breakeven seat factor of 81.0% by 0.9 ppts on international operations. 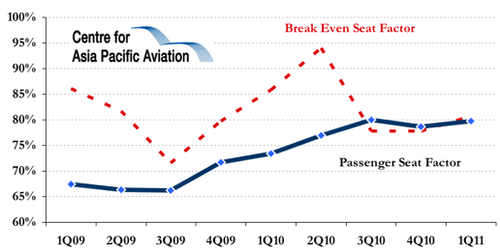 Jet Airways has transferred 65% of domestic capacity to the low cost Jet Konnect operation. The introduction of premium class on some services in May-2010, called Jet Konnect Select, is reflective of the improved demand environment. Jet is also taking advantage of conditions to enhance yield on domestic and international routes.

JetLite reported a profit after tax in 1QFY2010/11 of USD1.1 million, following a slight profit of USD471,700 in the previous corresponding period.

Source: Centre for Asia Pacific Aviation & Jet Airways
* Based on the conversion rate at USD1 = INR46.64 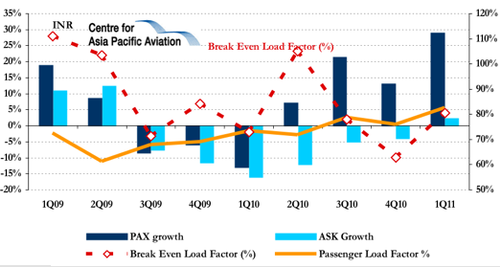 With consistent growth in operating margins expected to continue in the future, Jet Airways is expected to report full year profitability in FY2010/11. The premium demand revival is also expected to continue. Supported by strategic marketing initiatives and its on-time performance programme, Jet expects to enhance cost efficiencies and improve its EBITDAR margin.

Jet Airways has achieved a rapid recovery since 3QFY2009/10. High load factors in domestic and international operations (international has exceeded 80% in recent months), combined with strengthening yields and the impact of cost-reduction programmes, have resulted in profits since the third quarter.

Key achievements on the cost front included a 12.7% reduction in interest costs in 1QFY2010/11 and a 19.1% decline in distribution and selling costs.

JetLite is planning to restructure its regional operations by inducting six ATR-72s on lease, to replace CRJ-700s, which are being returned to lessors. This should help the carrier reduce costs on shorter, thinner regional routes and simplify the number of aircraft types operated on domestic routes from three to two families (B737s and ATR-72s).

Overall, Jet Airways is focusing on improving reliability of its fleet and is evaluating new routes to increase aircraft utilisation. The dark days of 2008/09 are gone.