Jet Airways reported a 10th consecutive month of consistent growth in Aug-2010, with the carrier attributing this to “the impact of major strategic codeshares and launch of Jet Airways Konnect services".

The carrier reported double-digit domestic and international passenger growth in Aug-2010 with domestic passenger levels increasing 15% to 780,000 and international passengers levels 22% stronger at 376,000. JetLite passengers increased 6% to 318,000.  Domestic load factors increased slightly (+0.4 ppts) to 70.4%. Market share for the company in the month stood at 27% (19.5% for Jet Airways and 7.5% for JetLite), according to data from the Ministry of Civil Aviation, meaning Jet Airways was the largest carrier in the domestic market on a combined level. 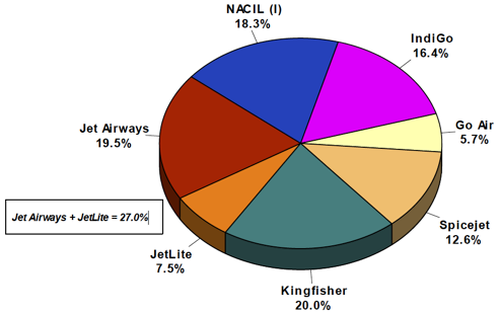 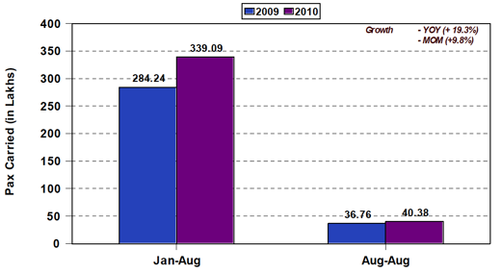 ICRA assigns LBBB- and A3 ratings to Jet Airways

ICRA commented: "The ratings incorporate Jet Airway's leadership position in the Indian airline industry, significant improvement in operating performance driven by a strong recovery in passenger traffic, cost control measures and easing of ATF prices, and a strong network on domestic and international routes. The ratings also factor in the overall recovery witnessed in the domestic and international airline industry since the second half of FY2010 reflected in strong growth in passenger traffic, improving load factors and stability in yields." Shares in Jet Airways slipped 2.7% yesterday

The order represents the carrier's largest single aircraft purchase, with the new acquisitions valued at HKD60.84 billion (USD7.8 billion). Deliveries will commenced in 2016 and are scheduled to stretch over three years. Cathay Pacific will operate the aircraft across its route network, principally on non-stop services to Europe.

Thai Airways shares gained 4.9% yesterday, following a 0.7% reduction on Wednesday and a 3.3% slump on Tuesday (this marked the largest reduction in five months of Bangkok trading), after the carrier announced it would sell shares in a rights offer at a discount to its market price.

Thai Airways priced its rights issue at THB31 apiece, slightly below market expectations of THB34-35 per share. The carrier aims to raise THB15 billion (USD486 million) to help fund fleet renewal and expansion plans. Thai will offer 483.89 million shares (including 246.93 million to the Ministry of Finance), as well as 221.8 million shares to other existing shareholders and 15.1 million to retail investors.

Elsewhere, shares in Tiger airways slipped 1.5%. The carrier yesterday stated it obtained approval from the French Export Credit Agency (ECA) to support the purchase of nine A320 aircraft.

Standard Chartered Bank is mandated as the Lead Arranger for the ECA financing relating to these aircraft. The transaction is currently in the documentation phase and is expected to close upon delivery of each aircraft. The nine aircraft are scheduled to be delivered over the next six months through until Mar-2011 increasing the carrier’s owned fleet to 11. From now until Mar-2011, Tiger Airways will also return two older aircraft currently leased. This means that it will be operating a fleet of 26 aircraft, of which 11 (42%) will be owned.

In other Asia Pacific LCC news, Philippine Stock Exchange (PSE) yesterday announced  it had approved Cebu Pacific’s IPO. The carrier plans to hold the domestic offer on 12-Oct-2010 to 19-Oct-2010, with a tentative listing date set for 25-Oct-2010.

The carrier will now hold a domestic roadshow on 24-Sep-2010 and international roadshow and bookbuilding on 27-Sep-2010. CEB plans to offer 186.6 million common shares at a price of no more than PHP150.00 per share. It also has an overallotment option of up to 28 million shares. The carrier plans to distribute 70% of the shares to international investors, with the remainder to be sold to domestic investors. 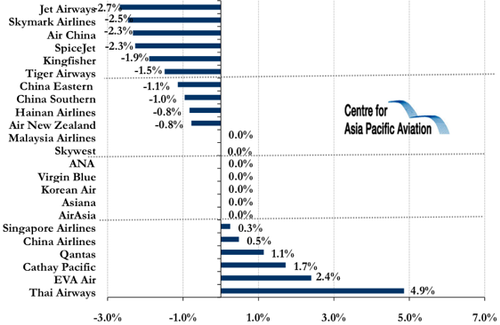