Japan’s Kitakyushu Airport has been identified by a government-commissioned survey as being appropriate for privatisation. The airport is the closest in Japan to Korea (just 200km distant) and the intention is that more low cost international travel should be developed through new gateways like Kitakyushu.

Kitakyushu is at the smaller end of the range of airports that are being, or have been, privatised in Japan, but it isn’t the smallest. It is one of five 'floating' (offshore) airports in Japan and is one of a handful of Japanese airports to have 24/7/365 operations.

The government of the prefecture is proposing to secure funds to extend Kitakyushu Airport's runway from 2500m to 3000m, aimed at equipping Kitakyushu to accommodate larger aircraft required for long haul international services, including freight aircraft.

Passenger traffic at Kitakyushu has been on a firm upward trend since 2016 and in 2019 is outperforming the national passenger growth trend by 5.3 percentage points. Of the seat capacity at the airport, 17.5% is low cost. The airport has targeted LCCS since it was built, and in the country overall the seat capacity ratio has shifted in favour of LCCs.

Runway to be extended and terminal infrastructure improved

Almost lost in the welter of airport privatisation activity in Japan during the last three years, Kitakyushu, one of the first airports identified for the development of low cost facilities in Japan when it was built in 2006 (and when there were very few low cost airlines there), has received government clearance to be privatised. 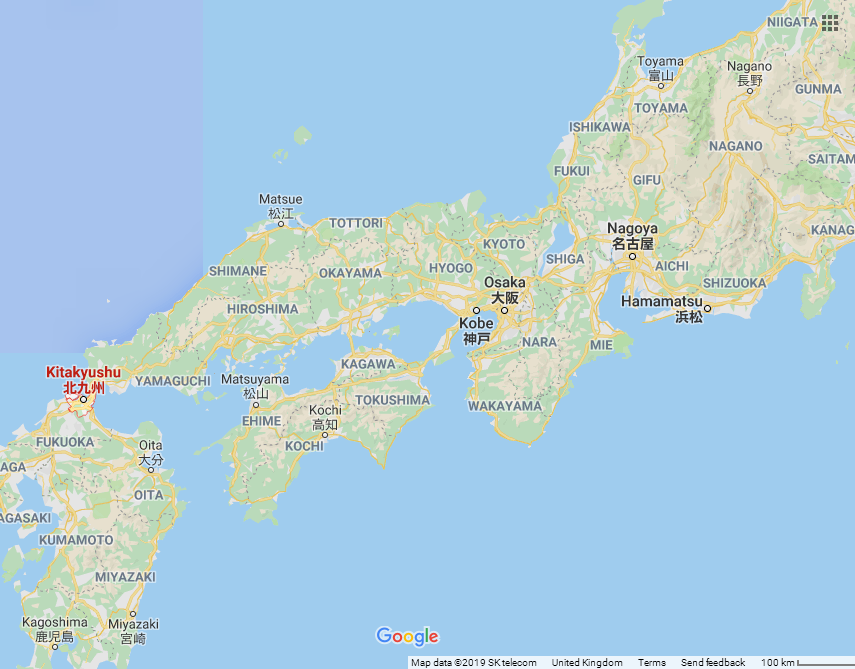 Japan's Ministry of Land, Infrastructure, Transport and Tourism (MLITT) has released the results of a survey investigating a proposal to privatise Kitakyushu Airport.

The survey concluded that privatisation is an "appropriate" measure to improve the management of Kitakyushu. It also recommended that the airport's runway be extended from 2500m to 3000m and passenger terminal facilities be improved.

Kitakyushu is at the smaller end of the range of airports that are being, or have been, privatised in Japan, but it isn’t the smallest. Five of the seven airports on Hokkaido Island, for which a deal is about to be concluded, carry considerably less passenger traffic.

Kitakyushu Airport has targeted LCCs since it was built

Kitakyushu Airport had a chapter in the 2006 and 2009 editions of the CAPA low cost Airports & Terminals report. Kitakyushu was also the site of CAPA's first North Asia LCCs Summit, in 2007.

Kitakyushu Airport was described as “an offshore island airport, Japan’s second after Kansai. Kitakyushu is a port city of one million people, Japan’s 11th largest, lying midway between Tokyo and Shanghai. It is one of Japan’s largest centres for international trade and industry. It is trying to enhance its tourism potential by targeting budget airlines. The island was built to low cost principles by sharing dredging and landfill costs with an unrelated port improvement project.

"The same philosophy of ‘start small, think big’ was applied to the terminal building, designed so that it can adjust to any increase in demand for facilities and services and built in two phases to include retail and event space. The Japanese market is not yet ready for a Quantum Leap to the position where little or no facilities are provided at airports. For the moment this is as close as it gets to a low cost airport in Japan.”

At the time, budget airlines were few and far between in Japan.

Slowly but surely the seat capacity ratio has shifted in favour of LCCs. As the chart below shows, 10 years ago only 1.3% of international seats into and out of Japan as a whole were classified as ‘low cost’, and 5.5% of domestic seats. 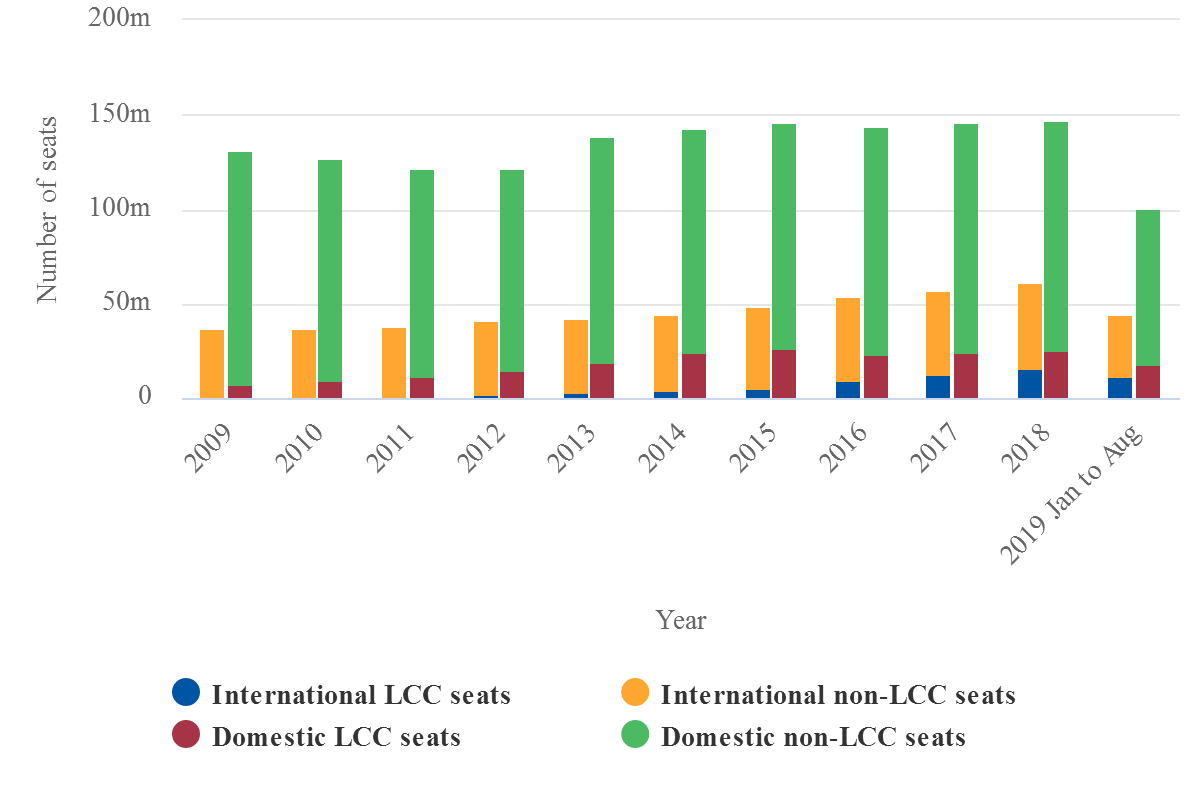 Kitakyushu, being an airport where 78% of seats are on domestic flights, has had a performance in this respect that is in line with the national trend. Of the seat capacity at the airport, 17.5% is ‘low cost’ – just 0.3 percentage points less than the national average. 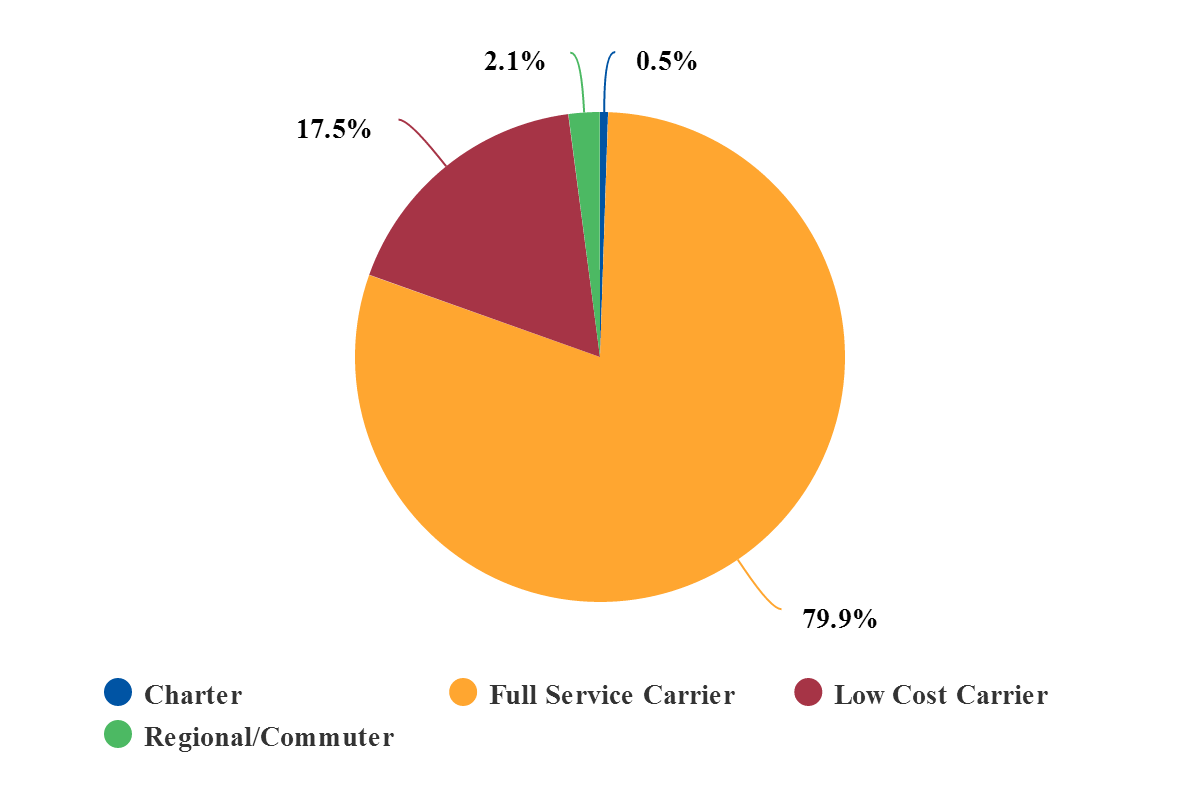 This is important because one of MLITT’s privatisation goals is to encourage domestic and international low cost segment growth. The department believes that this a good way of improving regional economies while taking some of the burden off large city airports – and especially Tokyo Haneda and Narita airports.

That result is outperforming the national passenger growth trend by 5.3 percentage points this year. 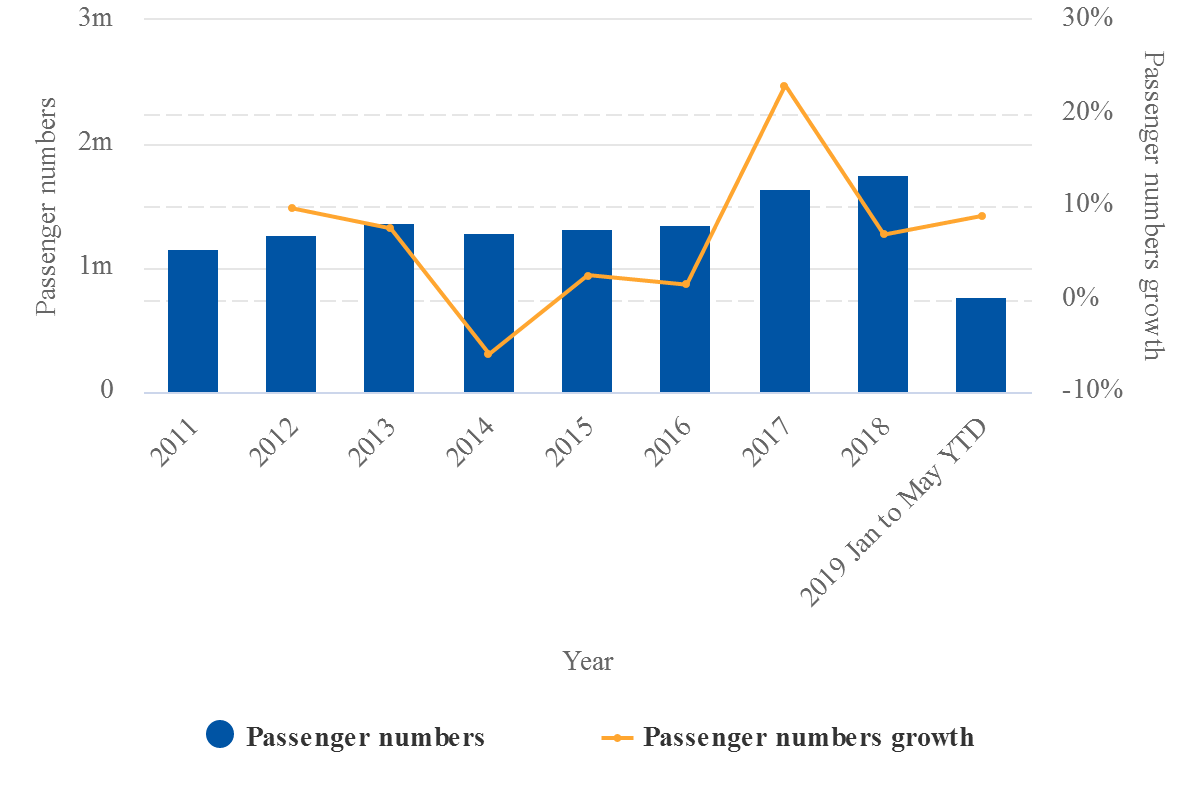 Kitakyushu also has a good balance of carriers.

While the hybrid StarFlyer has the majority of capacity (60%), the network airline JAL (19.7%) and the Korean low cost carrier Jin Air (12.4%) also play an important role (Kitakyushu is the closest Japanese airport to Korea, just 200km distant).

Other factors of interest to potential investors will include that it is one of a handful of Japanese airports to have 24/7/365 operations, which is possible because of its offshore location (the previous airport having been hemmed in by mountains).

In 2018 it was revealed that MLITT, in order to ease congestion at Fukuoka, intended to explore collaboration and role sharing between Fukuoka Airport and Kitakyushu Airport, because Kitakyushu operates on a 24/7 basis.

In a country that has five floating airports, Kitakyushu is not one to admit to any problems related to ‘shipping water’, let alone ‘sinking’ – unlike at least one of the others.

According to the CAPA Airport Construction Database, although there are no current construction projects, the Fukuoka Prefecture is aiming to secure funds to extend Kitakyushu Airport's runway from 2500m to 3000m under Japan's FY2019/2020 budget. The measure is aimed at equipping Kitakyushu to accommodate larger aircraft required for long haul international services, including freight aircraft. No time frame has been advised.

As for who would be interested in entering into a partnership to operate this airport (most Japanese airport privatisations have been by consortiums so far), Japanese companies include Mitsubishi Corporation; Japan Policy Investment Bank (aka Development Bank of Japan, which is also an advisor to MLITT); also possibly Japan Airlines and ANA Holdings.

Of the foreign companies, Vinci, which is actively managing three airports around Osaka/Kobe in a consortium, should be considered a front runner, except that Kitakyushu on its own might be thought of as too small and insignificant by the French giant.

All of the Japanese companies mentioned are part of the consortium which looks set to be awarded the Hokkaido airports package at the other end of the country. Historically, the pattern has been that a host of other Japanese companies join these consortiums as minority shareholders, each with their own specialisations.