Japanese tourism arrivals down 50% in March

The Japanese earthquake and tsunami disaster has also been a disaster for tourism, with the Japan National Tourism Organisation reporting visitor arrivals to Japan fell 50.3% year-on-year in Mar-2011. Japanese departures fell 18% year-on-year to 1.3 million.

The picture for airlines is not wholly bleak though: Bank of Japan Governor Masaaki Shirakawa stated the Japanese economy will expand next quarter as it recovers from the earthquake. Separately, the International Monetary Fund deputy managing director Naoyuki Shinohara stated the Bank of Japan may need to provide more monetary stimulus if power shortages, supply chain disruptions and the nuclear crisis after the quake are prolonged.

Shares in Skymark were down 2.2% on Thursday, while All Nippon Airways shares rose 1.3% higher.

Cathay Pacific reported the effect of the slump in demand on all our Japanese routes was evident in its Mar-2011 traffic results, particularly for premium traffic. North American and Southeast Asian markets "remained strong", although economy-class traffic on European and Southwest Pacific routes was "challenging", affected to some extent by an Easter seasonality shift as well as heightened competition. China markets remain encouragingly strong overall.

The carrier reported the following traffic highlights in Mar-2011: 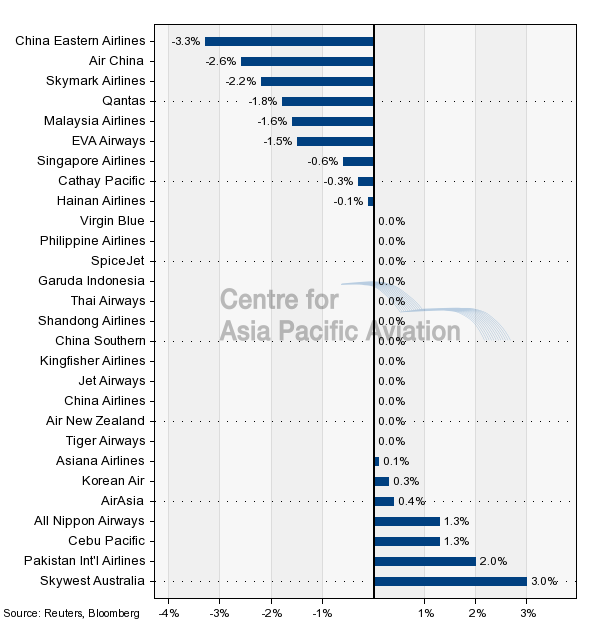