Plans by Japan Airlines (JAL) to relist its shares on the Tokyo Exchange come as the carrier is in its strongest position in recent history but faces a monumental structural shift in its market following the entrance of three new low-cost carriers. LCCs for much of the last decade accounted for approximately 5% of capacity in the lucrative Japanese domestic market but in Oct-2012 LCCs will represent nearly 19%. Preliminary indications show that incumbent carriers are not adequately prepared to respond to one of the largest changes in Japan's aviation history.

JAL is in a stronger position than competitor and larger carrier All Nippon Airways (ANA) due to JAL's bankruptcy re-organisation that saw sweeping changes in reducing headcount, aircraft and unprofitable routes. While ANA and JAL plan to rapidly grow flights in the under-served international market, there is little thought to substantially change the domestic market that will be engulfed by LCCs. With domestic services already lacking efficiency through low aircraft utilisation rates and load factors, legacy carriers will be in for a shakeup.

JAL could become one of the most valued airlines in the world. The IPO, if it proceeds as planned, will be the second largest globally in 2012 after Facebook and the seventh largest in Japanese history. The IPO will see the Government more than recoup the bailout it gave to JAL and also boost JAL's funding as it prepares to take delivery of new aircraft, including from its order of 45 Boeing 787s. JAL has been courting minority stakes from strategic partners International Airlines Group (IAG), whose British Airways subsidiary has been approved for a joint venture with JAL, as well as Qantas Airways, whose Jetstar division is partnering with JAL to launch Jetstar Japan on 03-Jul-2012.

JAL in the fiscal year ending 31-Mar-2012 posted a record profit of JPY204.9 billion (USD2.6 billion), which was not only a top earner globally but represented a 17% operating margin, a figure virtually unheard of amongst the world's largest airlines. JAL outpaced ANA on these metrics.

In the year ending 31-Mar-2013 JAL expects revenue to grow but profit to fall to JPY150 billion (USD1.9 billion), although it still projects a globally elusive (for aviation) double-digit operating margin of 11.3%, keeping JAL – in the short term – as one of the world's healthiest airlines. But the long term poses quandaries.

JAL's honeymoon will not last long, however, as it will be forced to contend with the growing presence of LCCs, which will represent 19% of domestic seats in Oct-2012, double last year's average figure. Share of passengers flown are expected to be above 20% due to Japanese legacy carriers typically reporting load factors below 70% while LCCs achieve 80% or higher load factors. Peach reported an average 83% load factor in its first month of operations, Mar-2012, and AirAsia Japan and Jetstar Japan are making large marketing pushes for their respective Aug-2012 and Jul-2012 launches.

Unlike for airlines in other markets, the domestic market is central to Japanese carriers for both network and financial reasons. Domestic revenue represents the majority of passenger revenue, and while ANA and JAL do not break down profit by segment, the domestic market also accounts for a larger source of profits for both carriers. With the Japanese LCCs expected to deploy the vast majority of their capacity domestically, ANA and JAL's core revenue and profit centres will see changes like never before. 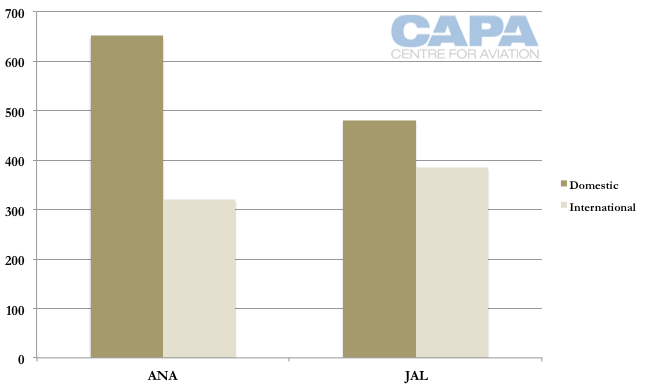 The carriers plan to expand their international footprints, with JAL growing FY2016 available seat kilometres by 25% compared to FY2011. ANA is also planning large international expansion, and both carriers will use the 787 to help achieve this.

JAL is less exposed than ANA in terms of capacity deployed to the domestic market. That places JAL in a more nimble position to respond to LCCs.

The LCCs aim to grow the overall Japanese market and help their joint-venture legacy airline partner, JAL for Jetstar Japan and ANA for AirAsia Japan and Peach. This was evident by ANA's disclosure of traffic on two of Peach's routes: Osaka Kansai to Fukuoka and Sapporo in which Peach's capacity helped the overall market grow compared to previous years. (Mar-2011 is largely an anomaly due to the earthquake and tsunami that struck the country that month and caused a decline in passenger numbers.) Yet on both routes it is evident that while the overall market grew, ANA's traffic declined as Peach picked up some of the passengers.

Cannibalisation has been acknowledged and expected by ANA and JAL, but they have not planned for the extent of cannibalisation that will occur. JAL plans to shrink available seat kilometres by 3% by FY2016 compared to FY2011, and also shift capacity from trunk routes the LCCs are likely to enter and redeploy the capacity to regional markets unlikely to be served by LCCs. This is too small an amount of capacity to shift and becomes even smaller when considering consolidation is already needed to boost load factors.

ANA has not given specific medium-term growth figures but expects to grow and then shrink as AirAsia Japan and Peach take on a larger role. The causes for concern are greater at ANA than at JAL. ANA has previously stated it expects LCCs to grow by four or five aircraft a year despite Jetstar Japan believing it can support 100 aircraft by the end of the decade – a growth double that of ANA's perceived limit. There has been recent discussion from AirAsia Group CEO Tony Fernandes to accelerate AirAsia Japan's growth, and ANA CEO Shinichiro Ito appears to be warming up to this idea.

In an early sign of cannibalisation for JAL, it will end in Jul-2012 its Tokyo Narita-Osaka Kansai route as Jetstar Japan enters that market. Although a small market and an anomaly due to the route linking two international airports less convenient to downtown city centres than their domestic counterparts of Haneda and Itami, cannibalisation may be larger than initially envisioned.

JAL's regional market, which was being portrayed as something close to sacrosanct, will see capacity from Jetstar Japan, with the latter's CEO Miyuki Suzuki telling a Tokyo forum on 19-Jun-2012 that it will enter regional markets and intends to codeshare with JAL, enabling JAL to reduce capacity on markets it cannot sustainably serve.

JAL's future is in its own hands, but market response unclear

A benefit from JAL's bankruptcy that cannot be quantified but critical is the thought-change that JAL and employees underwent: business must change and the old ways cannot continue forever. This basic thought is still gaining traction in Japanese society and aviation has not been the only industry to struggle with it. This was a lesson JAL learned but ANA did not, even if it was the leaner company before JAL's bankruptcy reorganisation.

While the LCC movement underway in Japan and larger North Asia promises change, incumbents do not appear ready; they alone are in control of responding. While JAL's ending of the Tokyo Narita-Osaka Kansai route positively shows a preemptive atitude, it remains to be seen if this approach will hold or become reactionary after implications from LCC expansion are firmly embedded in the market. Global experience of LCC expansion offers no standard, as it is largely this year that European legacy carriers are fully addressing short-haul markets made unprofitable by LCCs.

Arguably more unknown than the future price of oil is how the market will react to JAL's relisting. There could be short-term gains while long-term outlooks will depend on how successfully JAL responds to LCCs. Before JAL can respond, it – largely with the rest of Japanese transport – needs to first recognise the impact.