In a brief statement, the JAL Group has revealed a USD1.36 billion operating loss for the nine months ended 31-Dec-2009, compared to a loss of USD100 million in the previous corresponding period. Operating revenue for the nine-month period slumped 22% to USD4.28 billion, for an operating margin of -31.8%. Ordinary losses increased by USD1.44 billion to USD1.72 billion and net losses ballooned to USD2.0 billion (or a net margin of -46.7%) – its worst result since its 2002 merger with Japan Air System. JAL stated it “recognises and is deeply apologetic for the current situation that has caused great inconvenience and concern to our shareholders, financial creditors, customers, suppliers and other related parties”. 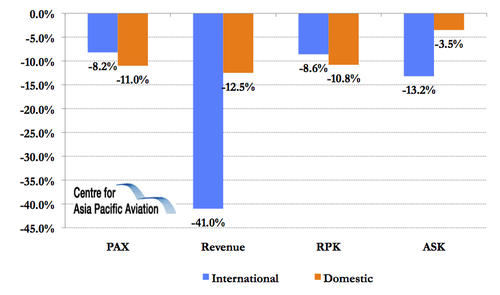 The bankrupt carrier filed with the Enterprise Turnaround Initiative Corporation of Japan (ETIC) on 19-Jan-2010 for support for its restructuring programme, noting it is “working fervently with the ETIC…to draw up an effective corporate revitalisation plan to rebuild the airline”. Last month, the Japanese Government announced a USD3.3 billion funds injection and fresh emergency loans of USD6.6 billion for JAL. The airline's shares were delisted from the Tokyo Stock Exchange on 19-Feb-2010.

Operational position improving quarter to quarter, but still a long way to go

There are some faint glimmers of hope. The worst of the damage in the nine-month result was done in the first quarter (to 30-Jun-2009), when JAL’s USD1.1 billion net loss shook all stakeholders into the realisation that JAL was in deep trouble. Operating losses by the fiscal third quarter had more than halved to USD281 million, as the rate of revenue loss slowed to 21.6% year-on-year, from 26.4% in the second quarter and 31.7% in the disastrous first quarter. 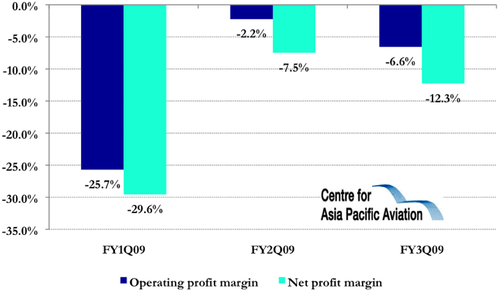 The immediate priority for JAL must be to stem the flow of red ink by carving out costs, as well as seeking to limit the impact on its brand from recent events that could otherwise lead to a catastrophic loss of market share to rivals.

On the former, JAL has recently announced new early retirement programmes in an effort to reduce employee costs. Meanwhile, alliances will also be crucial to JAL stabilising its market share and revenue situation. On this front, it can count on the support of American Airlines and its oneworld partners.

We are now one month away from JAL being able to close the books on the most disastrous chapter in its history. But it is a year when the carrier – and the government and its partners – finally came to grips with reality, potentially setting it on course for a brighter future. We are also one month away from Tokyo Narita’s runway expansion (and six months from Haneda’s fourth runway opening), triggering fresh growth and renewal for the Japanese aviation sector, as well as a rise in competitive pressure.