It is one of those ironies of fate that Japan Airlines (JAL), Asia's biggest and oldest full service airline, should be bankrupted in the same week as one of the newest and smallest LCCs, Tiger Airways, manages a successful IPO. Or perhaps it is simply a sign of the times. JAL's hideously costly operation could not contrast more starkly with Tiger Airways' aggressively low cost, no frills operation.

By this time next month, the now bankrupt Japan Airlines will have exited the Tokyo Stock Exchange (wiping out remaining shareholders). By this Friday, Singapore/Australian low cost carrier, Tiger Airways, will have bounded onto the Singapore Stock Exchange after a successful IPO. The domestic tranche of Tiger’s IPO was 21 times oversubscribed, and while the bigger international tranche was not as hotly fought over, the overall offering was still 4.5 times oversubscribed. JAL exits with debts of USD25 billion, Tiger enters with USD190 million in fresh shareholder funds in its back pocket, brimming with enthusiasm and bold expansion plans. And so the wheel turns.

JAL, in its bankruptcy filing, noted;

“Since the beginning of this century, several incidents such as the September 11th multiple attacks in the US, the outbreak of Severe Acute Respiratory Syndrome (SARS) and the Iraq War have contributed to the decline in demand especially for international flight services, which significantly affected JAL Group. In addition, there was a decline in tourism demand due to unprecedented soaring fuel prices and high fuel surcharges. Under such circumstances, our group has made every effort to improve our group's business…however, the financial crisis that occurred in the fall of 2008 pushed the world economy into an unprecedented global recession and JAL Group also suffered a significant decline in sales due mainly to a decline in demand for international passenger service for business users and a sudden decline in demand for international cargo service”.

Tiger, in its IPO document, noted;

“Tiger Airways establishes airlines in markets where we believe our low-fare, low-cost business model has exceptional potential for sustainable profitability…Our aim is to create a portfolio of profitable routes throughout Asia and Australasia. We believe that our focus on providing customers with affordable air travel positions us well for growth as Asia and Australasia is the world’s most populous region, with the fastest growing aviation market in the world, and the low-fare, low-cost model remains under-developed in the majority of countries in the region. We intend to further extend the route portfolio of Tiger Airways Singapore and Tiger Airways Australia and to establish operating airlines in additional markets across the region”.

Japan Airlines enters bankruptcy vowing to cut 31 routes, 53 aircraft (37 B747-400s and 16 MD-90s) and almost a third of its workforce by the end of March 2013. Employment at JAL will drop by about 15,700 to 36,201 over the same period and the company’s pension system will be slashed. View the JAL bankruptcy press release

Tiger Airways enters the stock exchange vowing to increase the size of its fleet from 17 A320-family aircraft to 68 by December 2015 and “intending to apply [the Tiger model] to offer domestic and/or international air travel in other Asian markets through the creation of additional operating airlines”. Tiger stated, “this may require us to identify suitable local partners and form joint venture companies where local regulations so require”. Tiger also intend to increase the frequency of flights on existing routes and to expand operations by commencing new routes between the airports its serves, as well as by adding new destinations from its existing bases in Singapore and Australia.

The JAL-Tiger story is part of an epic clash between the old world versus the new – a battle the old world seems destined to lose.

Asia Pacific low cost carriers (LCCs) accounted for 15.7% of total seats in the region in 2009, or just under one in six seats. The figure is up from just 1.1% in 2001. Rapid fleet growth by the region’s LCC players over the next two years could see them break through the 20% threshold by the end of 2011. And that is just the start.

This week's JAL and Tiger events are a microcosm of the changes taking place that are re-writing the rules of Asia Pacific aviation.

Asia's largest LCC, AirAsia is currently negotiating a joint venture LCC start-up in Japan; and All Nippon Airways is establishing its own LCC subsidiary, soon probably to be followed by JAL.

Encouragingly, the Japan Ministry of Transport is currently reviewing its LCC strategy. Civil Aviation Bureau Director General, Ryuhei Maeda, stated it is time to commence discussions regarding the policy framework affecting LCCs in Japan, at the Ministry of Land, Infrastructure, Transport and Tourism (MLIT) sponsored Growth Strategy Conference this week. The Conference aims to provide the ground work for the Government in regards to LCCs in Japan, addressing issues such as taxes and public charges.

LCCs have a low penetration rate domestically, accounting for just 4.7% of seats last year (having peaked at 5.1% in 2007). That the government has now broken with the past and taking the painful but necessary steps with JAL, while considering the requirements of the LCC sector, are very positive steps for the future. 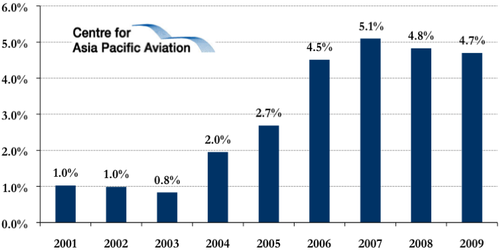