Japan’s Nikkei Stock Average increased 0.5%, for the third consecutive session and to a 15-month closing high on Wednesday, on positive economic data from the US, in the form of better-than-expected US factory orders.

However, JAL’s shares slumped 6.7%, after reports that the carrier’s main creditor, the Development Bank of Japan, and the Finance Ministry, support a bankruptcy filing as part of the airline's rehabilitation.

JAL’s share price has been highly erratic in the past few weeks, gaining 34% in the past two days on reports that the government was seeking to boost short-term funding from the DBJ. This was preceded by a 24% slump on the last day of 2009 trading.

Meanwhile, ANA’s shares gained 3.4%, with brokers stating that investors are switching their allegiance among the two major Japanese airlines. Shares in Japanese LCC, Skymark Airlines, were down 4.9% yesterday.

Also in North Asia, Asiana Airlines’ shares gained 3.8% yesterday, as creditors of the airline's embattled parent, Kumho Asiana Group, agreed to freeze for three months debt repayments at affiliates, Kumho Industrial Co and Kumho Tire Co, a move intended to give the conglomerate time to carry out a restructuring program.

Shares in Jetstar’s parent company, Qantas, reached its highest intraday level in 11 weeks yesterday, but ended the day down 0.3%, on confirmation that Jetstar and AirAsia plan to form a new “world-first” low cost airline alliance, centred on cost reductions and the pooling of expertise that aims to deliver cheaper fares for passengers of both carriers. AirAsia’s shares ended the day down 0.7%. See related article: Jetstar and AirAsia form cost-based alliance, pressure on Airbus/Boeing for new narrowbodies

Shares in Virgin Blue, meanwhile, gained 3.5%, after online booking company, WebJet, reported a sharp increase in bookings in Dec-2009. WebJet stated its current demand levels are “strong”, with the company adding that it sees “tentative signs of demand recovery”. 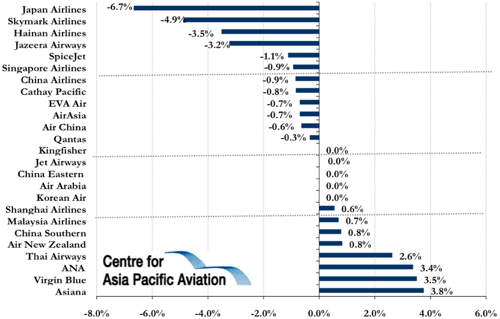