JAL's shares jumped for the second straight day, ending the day JPY118, up 4.4%. This following an 11.9% gain on the previous day, the largest increase in a year, as the Japanese Government intensified its push to reach an agreement to restructure the struggling carrier.

Prior to this, JAL's share price fell 26% last week, the largest one-week reduction on record.  The carrier’s shares have fallen by more than 30% since Prime Minister Yuko Hatoyama’s Government took power just over a month ago.

Shares in Malaysia Airlines were also up 1.0% yesterday, as the carrier stated it believes it has survived the most difficult part of its economic turnaround, due to cost cutting exercises. The carrier now plans to expand its codeshare agreements, develop alliances and improve yields.

Virgin Blue’s shares were also up yesterday, by 3.0%, after the carrier was raised from “hold” to “buy” by Royal Bank of Scotland Group, who cited improving economic conditions and benefits from a rising Australian dollar.

Also in the region, Singapore Airlines’ shares were up 1.7%, and Cathay Pacific’s and Qantas’ shares slipped 0.3%. 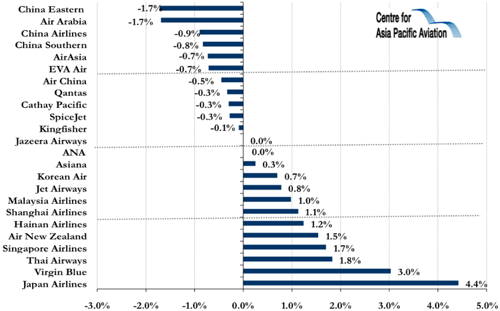