Japan Airlines continues to generate one of the highest margins among the world's major airlines, with Japan's second-largest carrier reporting a 12.7% operating margin for FY2013, the 12 months to 31-Mar-2014. JAL is well on track to meet its goal of delivering at least a 10% operating margin for five consecutive years, a feat not only rare amongst airlines but one coming from an airline that only a few years ago had a spectacular bankruptcy filing and which competes in a highly contested international marketplace.

But inside JAL the outlook is more conservative. The carrier is rightfully discouraged that FY2013 profits fell despite growth in revenue. The culprit is the depreciating yen, increasing fuel costs and overseas landing charges, among other fees. JAL's FY2013 fuel bill was significantly up while other airlines reported decreases, even with increased consumption. JAL is also incurring elevated maintenance costs from a retrofit programme to the long-haul and domestic aircraft JAL hopes will increase its competitiveness.

JAL continues to evaluate its position after receiving fewer Tokyo Haneda slots – but now that the steam is cooling JAL is recognising the damage may not be so bad after all.

Imbalance as revenue is up but profit down 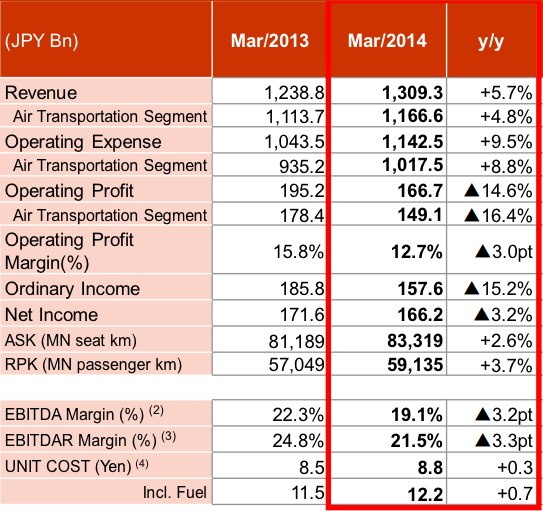 Operating expenses rose 9.5% in FY2013 despite system ASKs and RPKs being up only 2.6% and 3.7% respectively. Dragging JAL down was fuel, whose price is linked to the US dollar that is gaining against the yen. Retrofits on long-haul and domestic aircraft pushed up maintenance costs, the largest proportional increase.

Staff costs increased due to performance bonuses from the previous year. 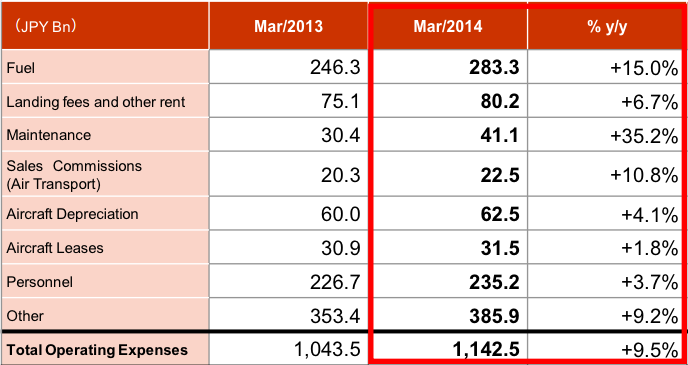 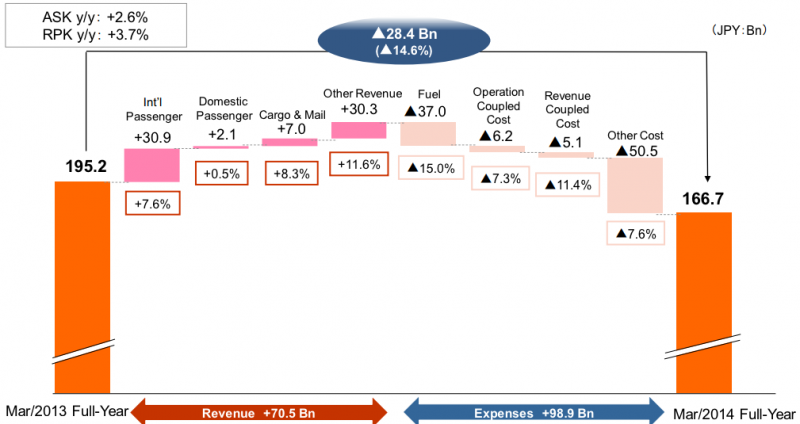 Maintenance costs will continue to be elevated as JAL continues a retrofit programme. JAL is installing its Sky Suite lie-flat business class product on 13 777s and nine 767s for medium and long-haul international markets, a much-needed upgrade from JAL's angled seats that also did not offer direct aisle access. This has seen density decrease by 5-15% while JAL notes yields have grown by 10-15%.

This is a surprising trend as other airlines (outside of Japan) have found a more premium business class product that reduces density struggles to command a higher yield. JAL reports its business class load factor is 80-90%, indicating that it can be stronger than economy class.

The slimmer seats in economy save weight while adding up to 5cm of legroom, an important option with (lower cost, but not low-cost) Skymark due to introduce all-premium economy A330-200 service on domestic trunk routes. Additionally, nine 767s will receive first class domestic service. Wi-Fi will be installed on domestic and international aircraft.

Unfortunately, FY2013's higher revenue but lower profit will not be a one-off occurrence. JAL expects 3.1% revenue growth in FY2014 but a further decline in profit to JPY140 billion (USD1.4 billion) and an operating margin of "only" 10.4%. JAL expects to continue to see some impact from the yen's movement while a one-off growth spurt at Haneda creates more competition.

In the medium term, however, further competition is likely as ANA plans for more Tokyo Narita services and the Japanese government considers growth options at Narita and Haneda through 2020 and 2030, possibly including new runways at each airport.

Or perhaps JAL will do better after all in FY2014. JAL entered FY2013 with a pessimistic profit projection but gradually increased it. JAL ultimately delivered a profit 20% higher, or JPY26.7 billion (USD261 million), than initially projected. During this time there was no apparent improvement in the operating environment, suggesting JAL was intentionally conservative initially. 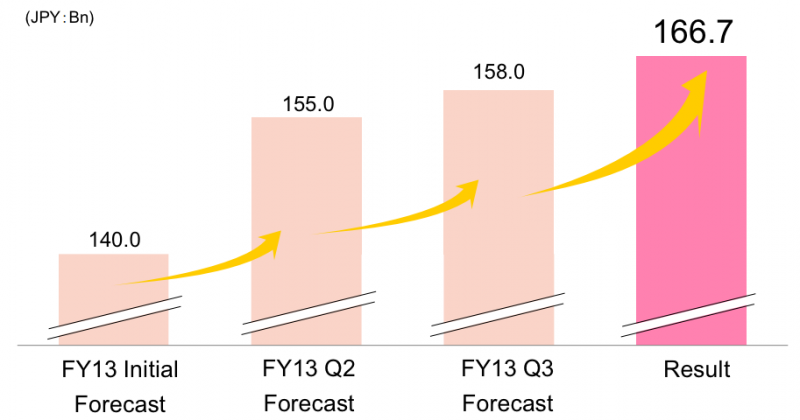 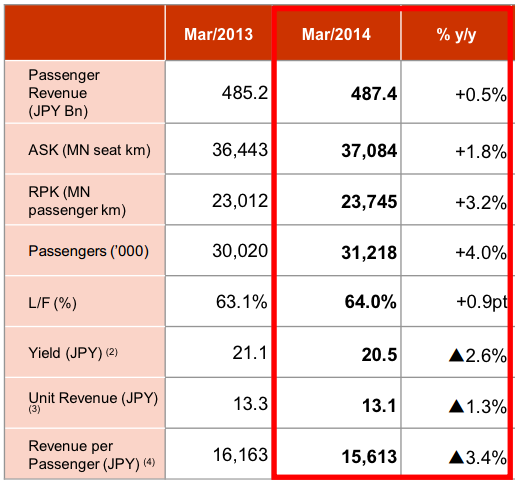 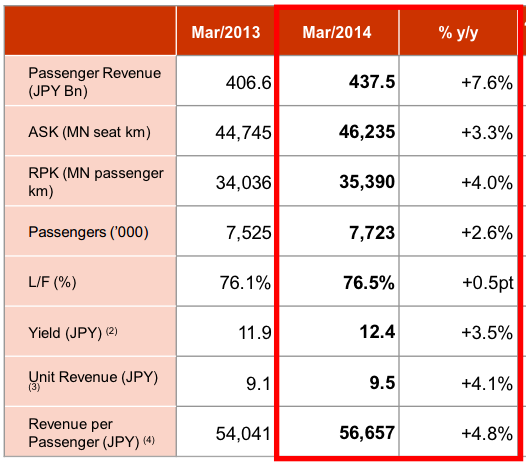 For FY2014 JAL plans to keep domestic revenue flat on the back of a 2.1% decrease of ASKs coupled with 0.7% gain in yield and 2.1% improvement in unit revenue. Internationally, JAL forecasts revenue and yield gain but unit revenue decreases as load factor drops. 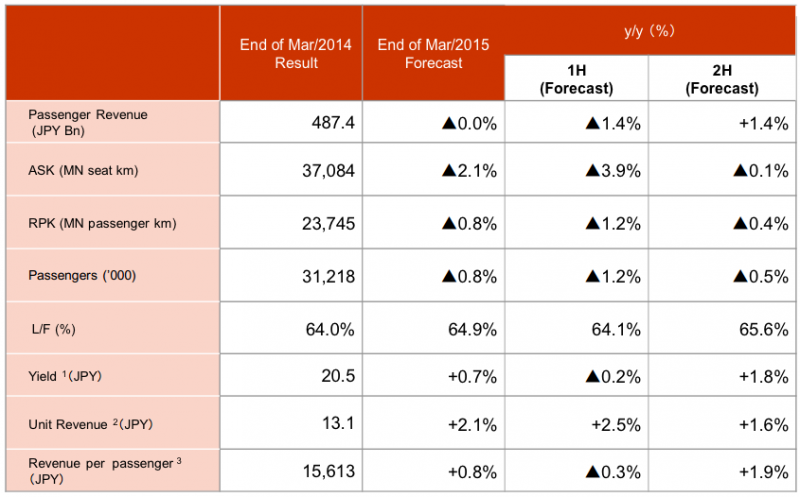 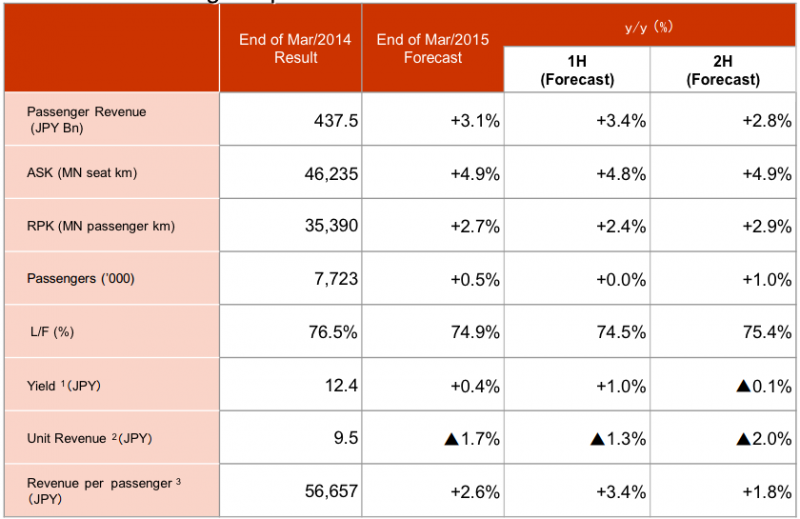 JAL is no longer pessimistic about Haneda slot dispersal

JAL took the short-end of the Japanese government's 2013 dispersal of international daytime slots at prized downtown airport Tokyo Haneda. JAL received only five compared to ANA's 11. While JAL took the unusual move (by Japanese standards) in publicly criticising the government for the imbalance, realistically JAL could only have hoped for three more slots at best: one long-haul and two short-haul. And JAL would likely have used at least one of the slots to replace a Narita service rather than create an entirely new one.

JAL may be beginning to acknowledge it had overreacted, although likely this was all part of the show. JAL at its presentation of FY2013 results said it had noticed a decrease in revenue but "the impact is not as serious as we had expected. As of [this] date, the impact is small."

While Haneda is undoubtedly more convenient than Narita, affinity is strong in Japan and it would likely take more for passengers to switch allegiance than airport convenience. JAL's various retrofit programmes and new initiatives, such as on-board Wi-Fi for domestic flights, may show it trying to create strength in other areas to make up for having fewer international Haneda slots.

JAL's sore spot remains its cost base. Although JAL significantly cut costs (unfairly, in ANA's view) during its bankruptcy reorganisation, JAL still has one of the highest operating costs among Asian airlines, surpassed only by ANA. Of course, this is relative. With over half of JAL's revenue being generated domestically – where foreign carriers with their lower cost bases cannot compete – the impact is lessened. But international is where JAL is concerned, especially as the international market will grow while domestic shrinks.

JAL's CASK in FY2013 had an unwelcome climb to JPY8.8 (USD8.6 cents), higher than its projection given in Mar-2014 as shown in the chart below. JAL plans that through staff productivity and aircraft utilisation improvements, CASK will drop to JPY8.0 (USD7.8 cents) in FY2016. JAL during its bankruptcy re-structure had a significant retrenchment, but does not plan staff decreases. Rather, headcount will be maintained at around 32,000. 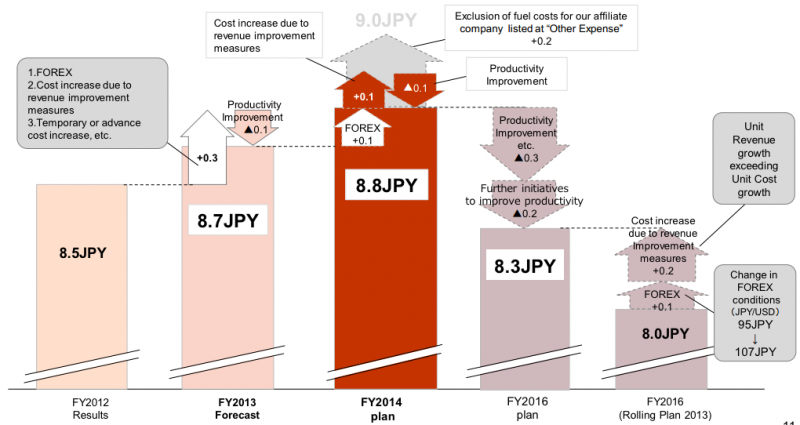 Increased Japanese consumption tax has not yet impacted sales

In 2012 the Japanese government agreed to raise Japan's consumption tax from 5% to 8% effective 01-Apr-2014. This was the first increase since 1997, when the rate went from 3% to 5%. The measure is one of many being promoted by the new government to increase the financial robustness of the country. Whereas airlines in other countries rally against taxes (often rightfully), Japan's airlines have been mute on the possibility the increased tax would deter some travellers.

However, JAL has said that while it is still early days, there is no apparent impact from the tax. JAL reports domestic bookings are up compared to the prior year, while international routes at Narita that JAL is not moving to Haneda have seen some softness; but these are more probably due to influences other than the consumption tax. 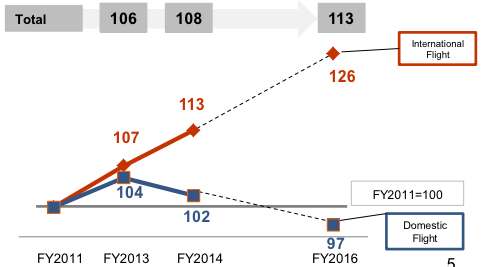 JAL has flagged it could even re-launch its New York JFK-Sao Paulo service, which was cut during the bankruptcy re-structure. Sao Paulo, home to the world's largest Japanese-origin population outside Japan, was JAL's sole Latin American service while ANA does not serve Latin America.

There are decent traffic flows between Japan and Brazil, and Japanese travellers currently pay a premium for JAL services over the numerous sixth freedom options. JAL is also operating charters to Italy, a market where neither JAL nor ANA have scheduled service, and this could develop into a regular offering. Only Alitalia serves the Italy-Japan non-stop market.

In another sign of Japan diverging from the rest of Asia's high-octane markets, JAL had a net increase of only six aircraft in FY2013, ending the year with 222 aircraft. JAL had no change in its large-sized (777) aircraft while it saw a gain of seven mid-sized aircraft, decrease of four small-sized aircraft and increase of three regional aircraft.

Without the additional regional aircraft – uncommon elsewhere at Asia's major airlines – JAL would have gained only three aircraft during the year. 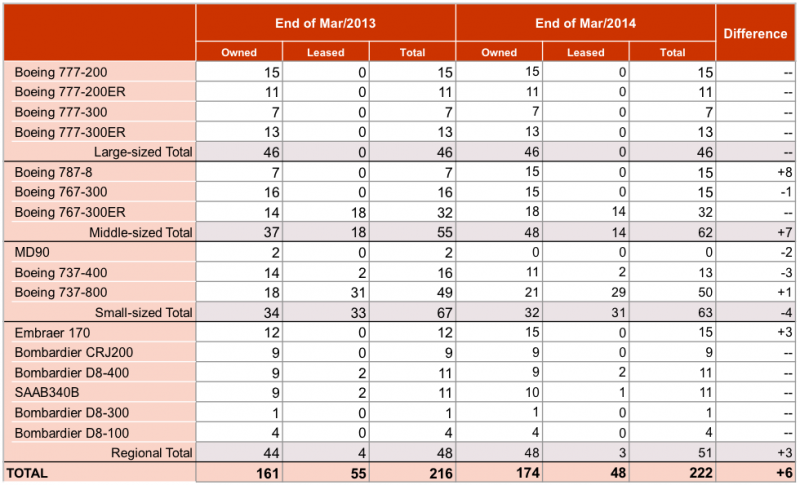 JAL's fleet projection continues to call for it to keep a flat fleet size at 222 while shifting the proportion of aircraft: large-sized aircraft will decrease in favour of mid-sized aircraft, a strategy to help JAL take the cream of the market and not focus so much on the lower-yielding segment.

This is one limb of the strategy behind JAL's selection of the A350 XWB over the smaller 777X.

JAL will also increase its regional jets in an effort to serve smaller markets LCCs and the Shinkansen will not.

JAL is adamant it must be stronger than it presently is to meet the challenges 10-15 years from now. What those challenges are is not exactly stated, but the outlook is growing LCC competition, more long-haul competition to JAL's core North American long-haul market, and a declining Japanese population.

While other airlines, which much shabbier margins, speak of a future, they do so in a shorter timeframe and with less concern at what the future brings. JAL's conservatism at a declining but still double-digit operating margin may not be as pedantic as it seems at first blush.

JAL has nonetheless set itself an ambitious task to push up profits at a time of higher expenses and greater competition. Efficiency seems to be its answer. The improvements gained during bankruptcy re-organisation cannot be over-stated, but there is much more left to do.

Even in the domestic market, CASK will be under pressure with more competition from Skymark and new entrant LCCs. Internationally, JAL is no different from other airlines in that CASK reigns. JAL is united with deep competitor ANA in that they both must reduce CASK.