Jakarta Airport ranks No 16 but not on global hub status

Indonesia is a nation with very impressive statistics that still remains somewhat off the beaten path and away from much global notice. Yet it is the world’s most populous Muslim nation and ranks fourth globally in total population. It is the largest nation in Southeast Asia and stretches from west of Malaysia to the north of Australia.

Comprised of more than 17,000 islands and stretching across thousands of miles of ocean, the country is an aviator’s dream boasting 171 airports with paved runways and hundreds more with unpaved facilities. But Qantas, based in a large near neighbour, flies only four times per week from Sydney and not at all from Melbourne.

Nonetheless, Jakarta’s airport, Soekarno-Hatta (CGK), ranks 16th in terms of global traffic. In the rankings released in 2000, it did not show up in the top 50. The reason for this relative obscurity is immediately evident in the following chart, three-quarters of the airports passengers are traveling domestically. 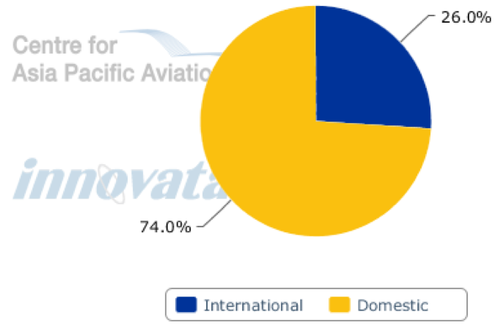 This kind of ratio is common for US airports but virtually unseen at most international hubs. The percentage even exceeds even that seen at Beijing with its huge domestic market.

And in yet another departure from the norm, the top seat provider at the airport is not the well-known national carrier, Garuda, but a carrier probably unfamiliar to most outside of Indonesia, Lion Air. 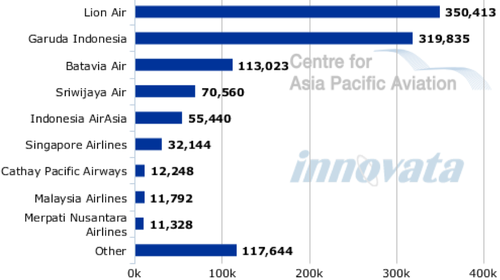 The same is true of at least three of the other top producers, Batavia Air, Sriwijaya Air and Merpati Nusantara Airlines. While AirAsia may be familiar, probably few outside the region will know that there is an Indonesian franchise operating in the country. Most operate primarily domestic flights but usually include Singapore and/or Malaysia.

Finally, the “other” number is very small in comparison with airports previously examined, further evidence of the intense domestic focus and scarce foreign presence at the airport.

Looking at the distribution of international seats, we find that they are virtually all offered in the Asia Pacific region, with the majority confined to Southeast Asia. This is quite a different pattern than that which existed in the 1990s, when Garuda was a truly global airline, with B747 service to many cities in Europe and a DC-10 that island-hopped to Los Angeles. 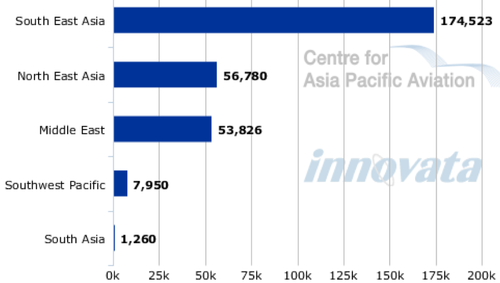 But the 1990s brought a number of high profile accidents and incidents, along with the Asian Economic crisis, which resulted in Garuda being blacklisted by the EU and a general collapse of the airline.

Off the EU blacklist

Rebuilding has been a long and painful process, with most Indonesian airlines (excepting Garuda) still banned from European service. Despite the lifting of the ban, GA serves only Amsterdam with a daily nonstop via Dubai.

The past 20 years have also seen a vast reduction in service by other European airlines when Jakarta was in the route networks of France’s UTA, Sabena, Swissair, Aeroflot and Czech CSA as well as the still-present LH and KL.

On the positive side, Chinese destinations have appeared and the carrier does operate some nonstop services from Bali to points in Asia and Australia.

The airport is also unique in the fact that less than 8% of its seats are currently offered by airlines aligned with one of the global alliances. Garuda is scheduled to join SkyTeam in 2012, which will give that group a much larger share. But even after that event, the majority of seats will still be unaligned. 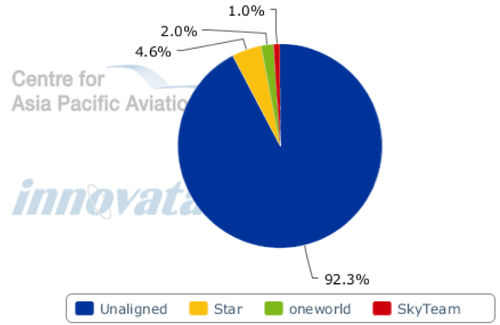 And despite the proliferation of domestic airlines at the airport, most still classify themselves as full service carriers with the dominant Lion Air providing business-class seats. 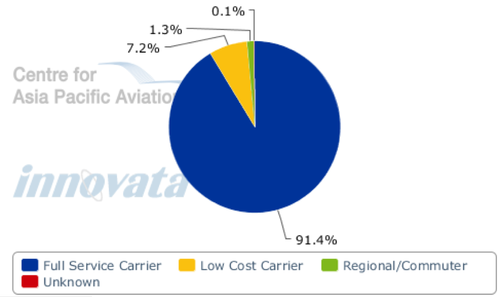 The lack of much competition on many international routes is reflected in the fares charged. A round-trip ticket between Jakarta and Bangkok ranges between USD1000 (USD0.34 per mile) and USD1250 (USD0.43). Over a similar distances, a ticket between Chicago and Phoenix is about USD550 and from Istanbul to Amsterdam the tariff ranges from USD275-500.

Clearly, the cost of travel may be a factor in the limited number of international passengers and destinations. There is, from the standpoint of passengers, probably some “room for improvement”.

A spoke in too many hubs?

Jakarta is something of an anomaly amongst its peers, with a much larger domestic sector and a very limited menu of international destinations and carriers. All three of the Gulf (weekly flights) carriers – EK 14, EY 7, and QR 6 – fly to Jakarta and doubtless provide much of the connectivity to Europe and the Middle East.

Additionally the larger carriers of Southeast Asia all serve not only Jakarta but also other major Indonesian tourist and business centres from their hubs, challenging GA on its own turf. Cathay Pacific, for example flies non-stop from HKG to Bali and Surabaya as well as CGK and Malaysia Airlines links numerous Indonesian points to its Kuala Lumpur hub.

Jakarta may continue to hold its position in the global rankings, but for the time being, most of those passengers will be domestic and it is unlikely to achieve the status of a global hub.