A vote that may help decide the future location of Boeing’s second B787 production line was made yesterday. Workers at the company’s new South Carolina facility, which was recently acquired from Vought, voted to end representation by the International Association of Machinists.

Under Vought, plant workers had voted to approve unionisation, but only by a slim margin. The vote potentially enhances the attractiveness of the South Carolina facility as the site for the second B787 assembly line.

Boeing is currently embroiled in a protracted dispute with its machinists, which resulted in an eight-week strike and major disruption to aircraft production in late 2008. Boeing’s ideological dogfight with its unions also combines with its very public desire for more subsidies from Washington State to ensure its production stays put.

This is driving speculation that the second B787 production line will not end up at Boeing’s home in Everett, but will head down to South Carolina. However, with yesterday’s decertification of the Machinists union in South Carolina, there is no guarantee that it won’t reunionise at some later date, particularly not with the confrontational attitude between unions and management.

A decision in the second B787 production line is due before the end of the year. Boeing's shares traded down just 0.1% yesterday.

Meanwhile, Embraer and EADS both gained more than 4% yesterday, as better air transport forecasts from major manufacturers have pushed up many aerospace stocks. While there is a general agreement that the recession has reached its trough, the extent of the lag before a recovery is something of a source of disagreement between manufacturers. Airbus and Bombardier have been buoyant, forecasting a return to growth in 2010, while Boeing is more conservative, and does not expect a recovery until 2012.

Smaller manufacturers have also risen on the better forecasts. BBA Aviation rose 4.9% on Thursday, while Aero Inventory was up 5.6%, having gained more than 90% over the past five months. 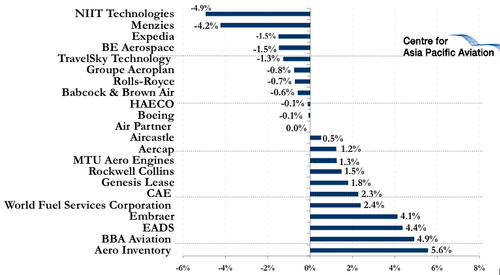