Ireland’s daa International has forged a reputation at airports in parts of the world where some might consider management difficult. With two contracts already at Saudi airports, daa has now won a five-year contract to manage, and advise on operations, aviation business, non-aeronautical revenue and facilities at King Abdulaziz International Airport in cooperation with Jeddah Airports Company (JEDCO).

Saudi Arabia is at a turning point, at least potentially, becoming more open to foreign visitors and those in transit and actively publicising tourist attractions internationally. But anyone doing business there lives in the shadow of growing concern about human rights abuses, the war in Ukraine having put ‘abuse’ in the global spotlight just as the Saudi authorities resurrect airport privatisation plans abandoned several years ago.

Ireland’s daa International has signed a contract to lead, manage, and advise on operations, aviation business, non-aeronautical revenue and facilities at the Jeddah King Abdulaziz International Airport for a five-year period in cooperation with Jeddah Airports Company (JEDCO).

The multi million euro agreement with Saudi Arabia’s General Authority of Civil Aviation (GACA) expands on daa's existing activities in the country, where it has managed and operated the Riyadh King Khalid International Airport Terminal 5 for five years and has also recently been appointed airport operator for the new Red Sea International Airport.

Daa International has clients in Australia, the Philippines, Saudi Arabia and the UK, providing airport management, operations and maintenance consultancy.

It operates separately from Aer Rianta, which has equity in Duesseldorf Airport and also in the concessionaire operating Larnaca and Paphos airports in Cyprus.

JEDCO established in Feb-2022 as part of an initiative to enhance competition, profit and global performance through private sector engagement

Jeddah Airport (JEDCO) is a state-owned entity with a commercial mandate similar to those of daa, which operates the Dublin and Cork airports.

The King Abdulaziz International Airport in Jeddah is a major international airport serving more than 38 million passengers in 2019 and with a capacity for over 46 million passengers per annum. It is located in an area of 105 square kilometres, with multiple terminals, cargo, maintenance, repair and operations (MRO), and is well known for its open-air terminal for the seasonal Hajj influx.

Terminal 1 is 800,000sqm and is currently the second biggest terminal in the world; it is eight times bigger than the Terminal 2 at Dublin Airport.

Steady growth over the last five years; capacity being regained

Passenger growth in the years since the Riyadh airport deal was signed has been steady at between 3.6% and 9.6% per annum through to 2019, after which it declined by 67% in 2020 (the latest year with available statistics). 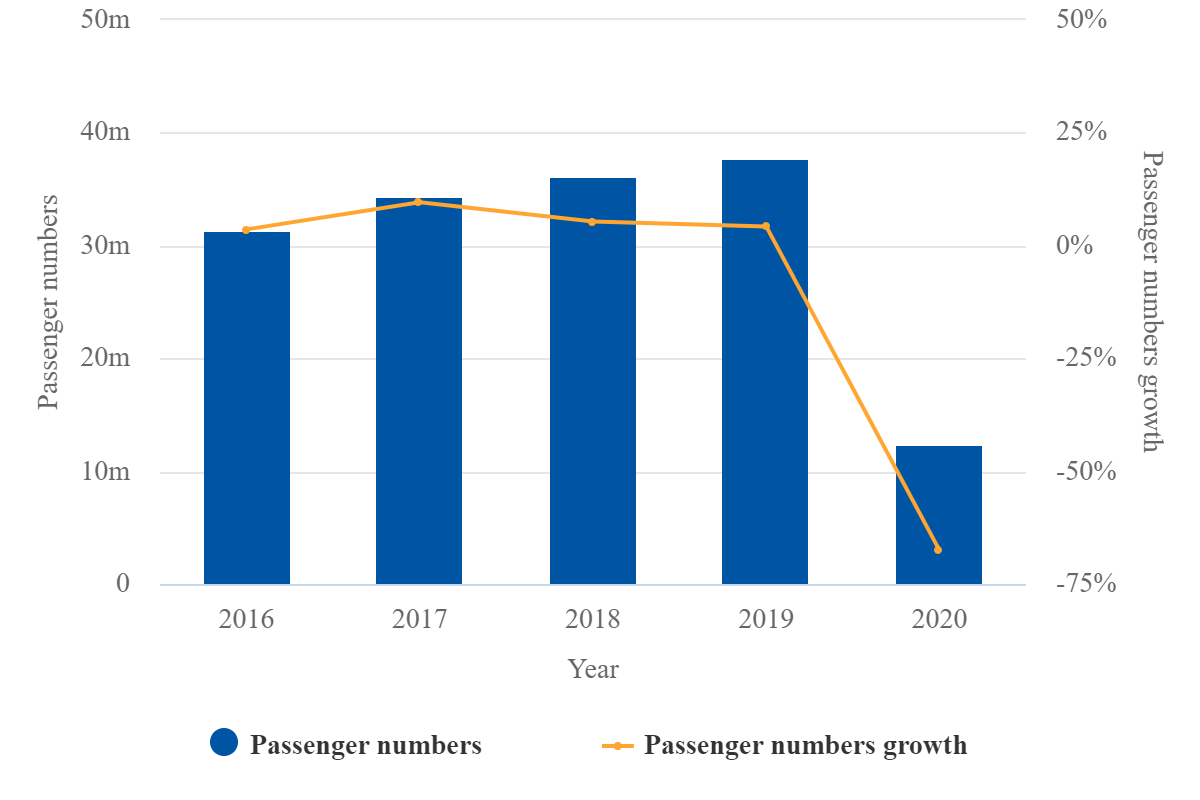 The airport is regaining capacity, and in the week commencing 28-Mar-2022 is within 15% of the capacity available in the comparable week of 2019. But that is slower progress than at Riyadh, where 2019 capacity levels were exceeded in early Mar-2022. 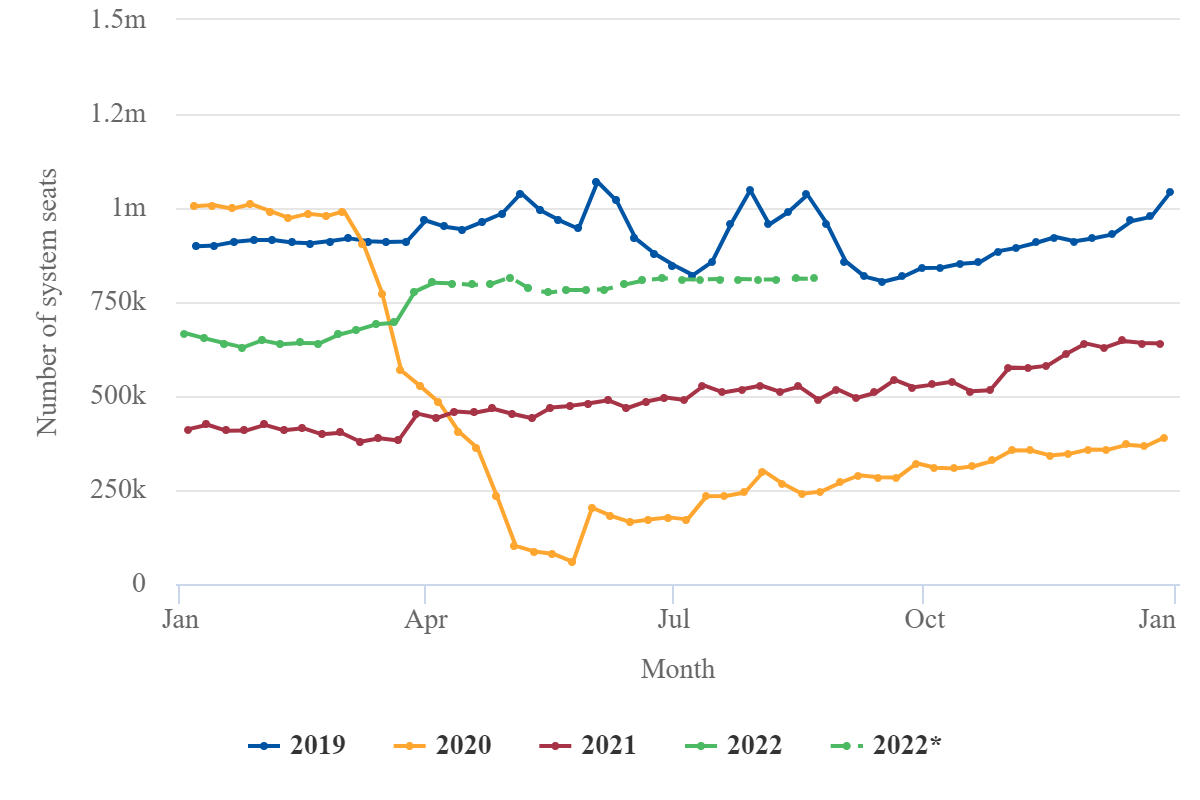 Saudia is the principal airline with 50% of capacity, and 72% of capacity is taken by Saudi airlines before the largest foreign one, Egyptair, with only 2.9%.

This explains the 72% weighting of ‘local’ to ‘foreign’ seats. 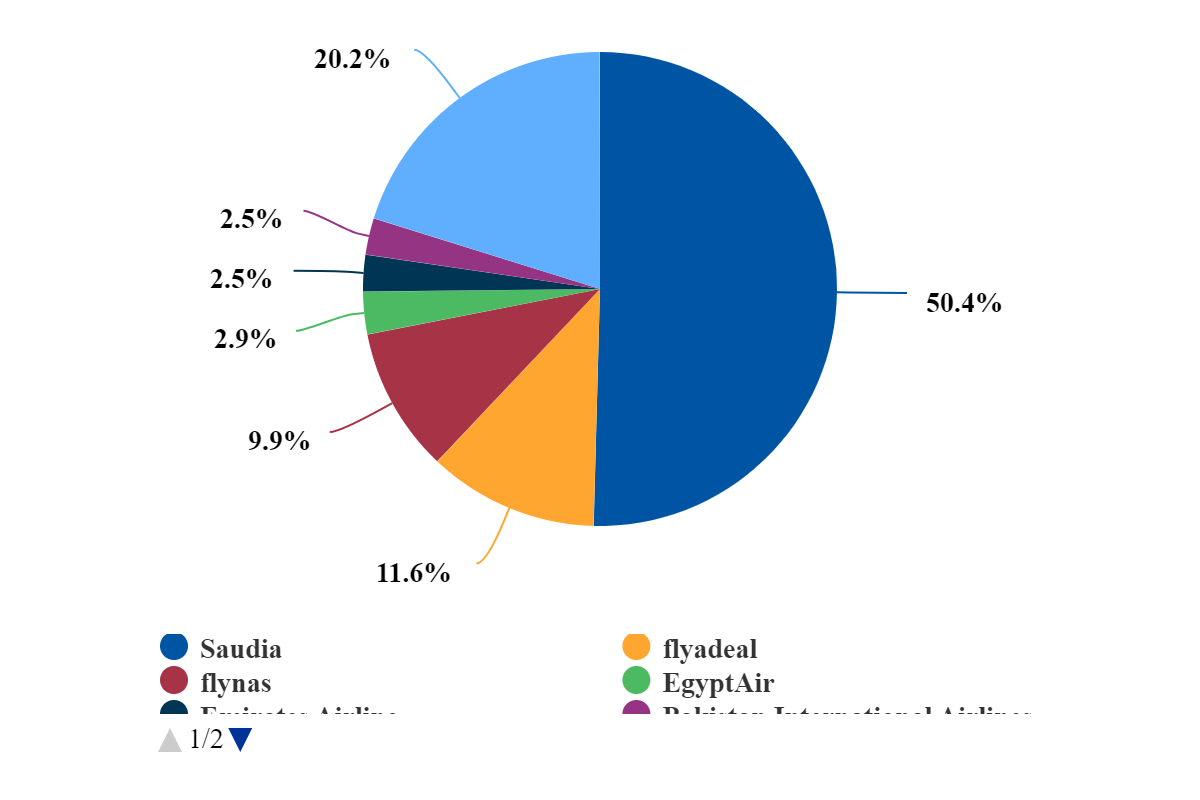 Jeddah International Airport has the potential to act as an international hub, but the route network is still compacted

On the other hand, that returning capacity means that the airport’s route map is looking healthier, with comprehensive Europe-Middle East-Southeast Asia connectivity at least. It could act as an international hub, possibly one to compete with airports such as Dubai, Doha and Abu Dhabi, and that appears to be the aim of daa international.

The company says it will ultimately have a team of 45 people in Jeddah, which will include senior executive management. Daa International will mobilise 15 managers over Mar-2022 and Apr-2022, with additional personnel to join the team over the following six months. 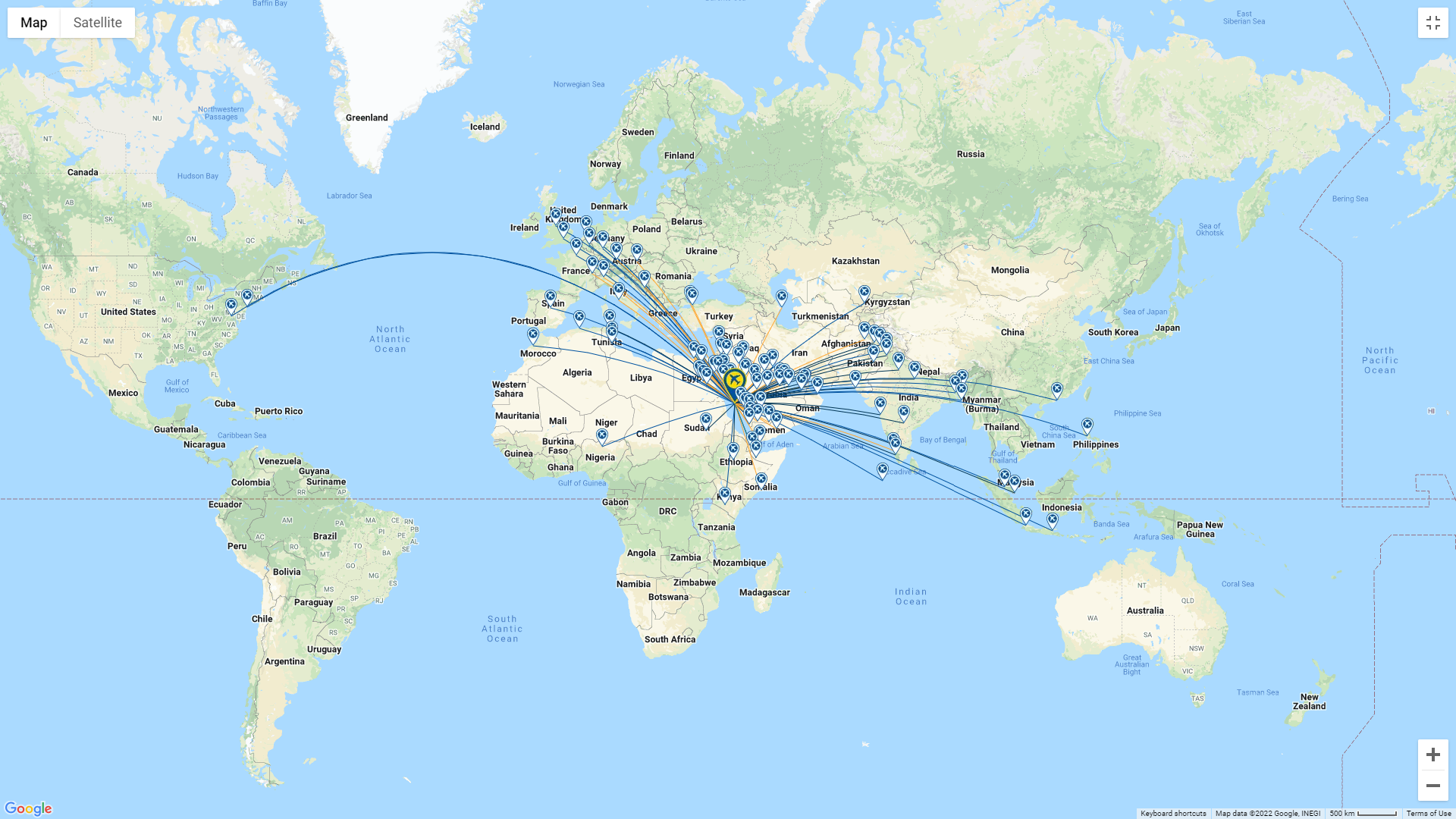 But there is still work to be done if making it a truly global hub is the aim.

As the chart below shows, the vast majority of capacity is compacted into the Middle East, South Asia and North Africa. 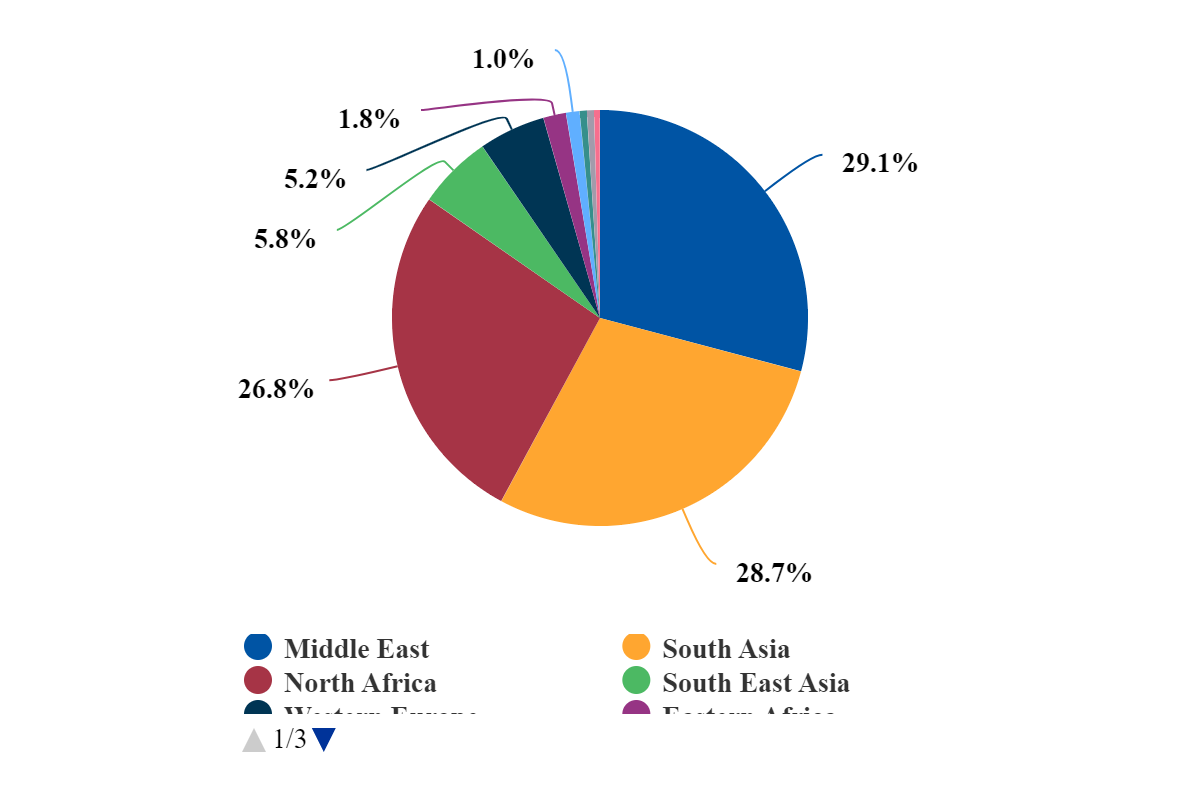 The opportunity for independent tourism has been enhanced

There is something of a charm offensive being mounted by the Saudi government presently, as visa regulations have been relaxed in favour of individual or small group visits in addition to the formal large group visits that were the only ones permitted until several years ago.

TV tourism adverts have started to appear. To entice more tourists directly low cost services will be needed, and currently they account for 28.6% of capacity – but that is almost seven percentage points less than at Riyadh.

The largest airline alliance at Jeddah is SkyTeam (50.6% of capacity, the others amount to only 7.5% between them), which is home to Saudia. That share is slightly greater than that at Riyadh.

Utilisation across the airport’s three main terminals is high and well organised, with the bulk of capacity being in Terminal 1.

The chart below is for Monday 28-Mar-2022 and demonstrates how the airport is in use around the clock, with arriving and departing capacity well spread throughout the day and night. 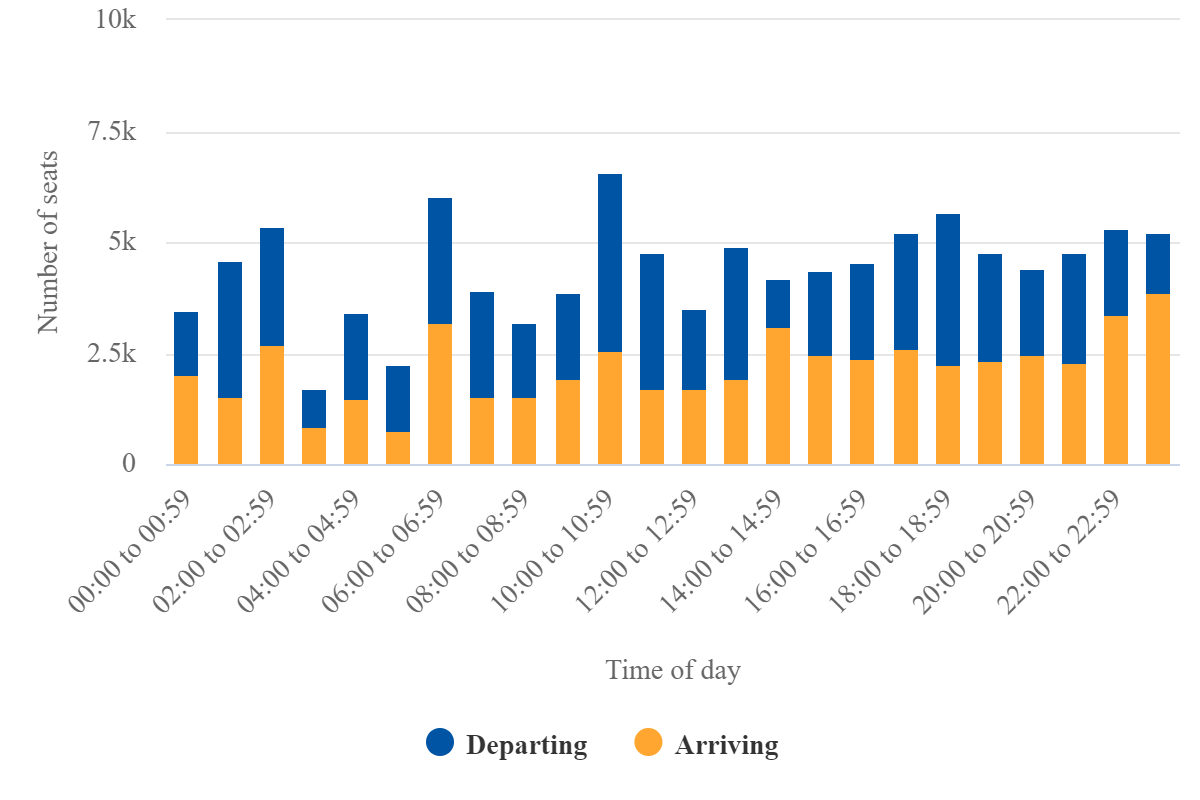 The Jeddah Airport is an integral part of the Saudi Arabian ‘2030 aviation vision’ and is the international gateway to the holy cities of Mecca and Medina.

Daa International submitted its proposal along with a large number of other global airport owners and operators.

The length of the contract, five years, may appear to be short, as it would be for a concession or other agreement requiring a financial commitment, but it is not unusual for management contracts of this nature, which have become quite common across the Middle East and North Africa. Especially so in the case of Saudi Arabia, which is taking small, tentative steps back towards privatisation of its airports, having previously abandoned that direction for several years.

Under the circumstances, caution is only to be expected.

A similar interpretation might be made on the requirement to work under partnership with, but also under the direction of, the airport company.

Daa International’s announcement also made reference to it having recently been appointed Airport Operator at the Red Sea Airport.

This airport is part of the Red Sea project, a ‘sustainable luxury tourism destination’. It is located on the west coast of Saudi Arabia and should be completed by the end of 2022. The airport is expected to handle one million passengers per year initially.

International perspective on Saudi Arabia still in a state of flux

One aspect of the deal that quickly raised its head in the Irish press is the international perspective on the Saudi government, and in particular – human rights abuses, including the murder of a Saudi journalist in Saudi Arabia's Turkish consulate in Istanbul in 2018.

Recently the government was condemned internationally for a mass execution which took place.

Questions have been raised about the Saudi purchase of a UK football club, Newcastle United, as to whether its new owners (which ultimately include government officials at the highest level) can be classed as ‘fit and proper’, and the administrative body there is investigating the matter.

Against this must be weighed the fact that Saudi Arabia is the world’s second largest producer of oil, with 12% of the global total in 2020, when supply from certain other countries is decreasing.

In any case, daa maintains that as a state company it adheres strictly to government guidelines on the regimes and countries with which it can do business.