The initial lifting of sanctions on Iran occurred on 16-Jan-2016 ("Implementation Day"), and major changes are already under way for the country’s aviation industry. The first new Iranian aircraft orders for over three decades have been announced and foreign carriers, most notably European airlines, are hastening to add new routes.

These are just the start of what promises to be a seismic shift for aviation in Iran. During the sanctions period, the country’s aviation authorities, its airlines and even airports adopted a survival mentality.

Now that the sanctions are being rolled back, attitudes are switching to new opportunities for growth and the sector is planning for a brighter future.

The first action will be to acquire new aircraft fleets

One of the key points emerging in discussion from the CAPA – Centre for Aviation Iran Summit 2016, held in Tehran 24/25-Jan-2016, was the significant potential of the revival of the country’s commercial aviation fleet. Speaking at the Summit, Iranian Deputy Minister for Legal & International Affairs Dr Seyyed Abbas said that the most important immediate outcome from Iran’s deal with the P5+1 nations was the removal of sanctions that had previously blocked the purchase/acquisition of commercial aircraft and parts.

Iran’s 14 airlines have a combined commercial fleet of about 280 aircraft, operating around 22 million seats p/a. The barriers to Iranian airlines acquiring new aircraft have left them operating one of the oldest fleets in the world, and the lack of access to spares and parts has grounded around 130 of its ageing fleet.

According to Iran Air chairman & MD Farhad Parvaresh, speaking at the CAPA Summit, his primary challenge was to simply “keep the company alive” and deal with the “problems, issues and sufferings” that cropped up in day-to-day operations with its elderly fleet. According to Iran Aseman Airlines VP of executive affairs and fleet development Mohammad Gorji, about 60 Iranian aircraft could immediately be returned to service once parts are available from Western manufacturers.

Putting these aircraft back into the sky would be a strictly short term measure, to meet pent-up demand while local airlines begin the long process of negotiations to buy or lease aircraft.

Iran Civil Aviation Organisation (CAO) projects the country will need 80 to 90 new aircraft p/a over the next five years and as many as 550 aircraft within a decade, just to deal with local demand. The Association of Iranian Airlines is even more bullish, projecting the surprisingly specific demand figure of 581 aircraft over the next 10 years.

Iran is in other words really planning to reset the clock on its civil aviation industry. The vast majority of its commercial fleet is simply too old, too inefficient and too maintenance heavy to be commercial in today's world. Only 20 aircraft in the active Iranian commercial airline fleet are less than 20 years old.

At the CAPA Summit, Iran Government Deputy Ministry of Roads & Urban Development Ashgar Fakhreih Kashan revealed that Iran had reached the final stage of negotiations with Airbus on a deal for more than 100 aircraft. Just four days later,                 . This was followed up with a firm deal with ATR for 20 ATR 72-600 turboprops, as well as 20 further options, again for Iran Air.

The major Airbus order is expected to firm up shortly

This combination of aircraft would be more than sufficient to re-establish Iran Air as a major international network airline. At present, Iran Air has a network of 27 international and 25 domestic destinations, but the vast majority of its operations are limited to flights of no more than about 6 to seven hours. The two exceptions are the carrier’s flights with 747SPs to Beijing and to Kuala Lumpur. 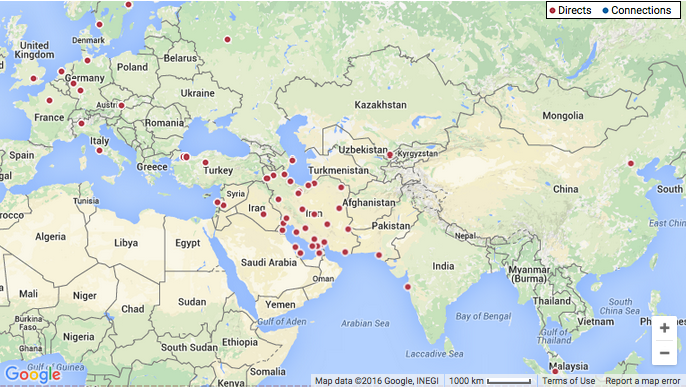 The A320 narrowbodies are suitable for domestic routes and regional flights of up to around five hours. The A330 mid-sized widebodies can be used on shorter, high demand trunk routes or long haul flights of up to 6250-6550 nm. The larger A350-1000s, capable of carrying 350-400 passengers, can operate very long haul routes of up to 8000 nm and the A380 is already a favourite with Middle Eastern sixth freedom carriers, in service with Emirates, Etihad Airways and Qatar Airways.

The smaller ATRs will be used primarily for short range domestic routes, mostly tourist destinations and smaller Iranian towns and cities. Iran has more than 65 airports, but the vast majority of them are under-served due to a lack regional jets and turboprops.

Iran Air’s current in service fleet consists of just 35 aircraft. If the majority of the new aircraft are to be delivered before 2020, the carrier will at least triple its current fleet size in under five years.

This pace of expansion will inevitably place tremendous strain on the carrier’s resources. Iran Air currently employs around 7000 staff, roughly 200 per aircraft – a figure in line with its regional peers. If it is to build its fleet to around 120 aircraft by 2020, it will need to expand employment to around 20,000 staff, or more.

In addition, Iran Air will need to expand its technical infrastructure on a massive scale to deal with new aircraft types and a growing fleet. Airbus has already announced it will provide assistance for airport and aircraft operations, training on the technical and academic levels, guidance in maintenance and repair operations, as well as industrial cooperation and wide harmonisation of Iran’s air regulations.

The European manufacturers have gained a first mover advantage, but Iran has no intention of just relying in European aircraft. Shortly before the end of 2015, Iran’s Civil Aviation Organization acting director Mohammad Khodakarami commented that the country plans to split its aircraft orders evenly between the major manufacturers.

Orders are certain to come in Iran for Boeing, but it will take time. The US sanctions against Iran are notably more involved than the European sanctions and will take longer to unwind, meaning Boeing will need to be patient before any deal can be announced and finalised.

Iran Air chairman & MD Farhad Parvaresh revealed at the CAPA Summit that, as part of long term planning, the airline is examining the possibility of adding more than 50-100 seat aircraft to its fleet to improve its domestic network with an “air taxi” type operation. Plans for a commuter airline subsidiary are also under consideration.

Funding remains an issue as sanctions are progressively removed

Japan relinquished its sanctions against Iran on 21-Jan-2016 and Canada followed in early Feb-2016. Brazil never enacted sanctions against Iran, but exports were blocked due to US sanction rules about US-manufactured content. Embraer Commercial Aircraft CEO Paulo César de Souza e Silva noted in early 2016 that the company believes there is “a huge opportunity" to replace and expand the Iranian regional jet fleet.

There is still plenty of ordering to come in Iran, but questions remain about how these deals will be financed.

Iran Air is a state corporation and benefits from its sovereign ties. ATR noted that during the order negotiations, the Italian and French states played important roles to achieve the signing of this deal, through the participation of their export credit agencies, Sace (Italy) and Coface (France). The UK export credit agency has also announced that it is ready and willing to provide support for Iranian fleet purchases.

However, support for the private airlines in the Iranian market may not be as readily forthcoming. Aircraft financing deals are mostly conducted in US dollars and while certain US Treasury sanctions remaining in place, Iran remains largely locked out of the international financial system.

Additionally, some US sanctions will remain in place indefinitely, as they are imposed outside the generalised sanctions over Iran’s nuclear programme. The US Treasury is also keeping some financial sanctions in place for the time being, which make deals with US companies and deals denominated in US dollar highly problematic.

Aviation lessors and non-Western financiers, particularly Chinese banks, provide an alternative to the traditional US and European transport financiers. However, even here there are lingering concerns about the levels of risk and regulations in Iran, particularly among European entities.

Dubai Aerospace Enterprise CEO Frioz Tarapore, speaking at the CAPA Summit, commented that lessors and aircraft owners require the recognition of their ownership rights and recognition of aircraft registration outside Iran before they will be comfortable doing business.

Iran is not yet a signatory to the Cape Town Convention, which protects the interests of aircraft lessors and owners by guaranteeing rights concerning aircraft ownership, defaults on leases, recouping debts and repossessing aircraft. Full implementation of the Convention would also bring with it access to cheaper financing, thanks to the reduced risk exposure for lenders.

Iran’s deputy Transport Minister Asghar Fakhrieh Kashan stated in Jan-2016 that the country has started the process to join the Convention and discussions between the transport and finance ministries is underway on the subject.

However, signing up to a major international convention is an involved process that will take time to complete. Even so, it will provide reassurance to potential financiers. According to Mr Tarapore, if lessors see regulatory progress in the right direction, this will open doors to do business in Iran, even is there is still a significant regulatory ground to be covered.

DVB Bank managing board member Bertrand Grabowski commented at the CAPA Iran summit that there needs to be “much more clarity” on what the US Treasury is willing to authorise when it comes to financing deal in Iran. Mr Grabowski suggested that it will be more than 18 months before Western lenders are comfortable lending into the market.

Iran has major aspirations for its airline and aviation industry

Even with financing and infrastructure concerns less than settled, Iran is thinking big for its national carrier, and is optimistic about the opportunities for its aviation sector.

Iranian Civil Commission of Parliament chairman Dr Mamedi Hashemi noted at the CAPA Iran Summit that aviation will take a special place in the development of Iran, as a focus for development of the country’s industry, technology and overall good governance and modernisation.

Iran is surrounded by examples of states that have rapidly and successfully developed their national carriers that have been developed into major economic assets.

The country has some of conditions for success already in place – a growing market, favourable geographic position, a regulator willing to meet the needs of the sector – but much remains to be done before Iran is able to mount a serious challenge its regional rivals.