Mexico’s third largest airline Interjet has faced a confluence of events that are creating formidable challenges for the company. The airline is struggling to rid itself of Sukhoi Superjet narrowbodies that have been plagued by maintenance issues, at the same time as attempting to correct assumptions that it is headed for bankruptcy, and has reportedly also faced staffing issues.

As it works through all those issues, Interjet is making significant network changes that include bulking up its operations in Mexico City and creating a hub in Cancún. It remains to be seen whether the latest changes will be successful, and Interjet is undertaking its network revamp at a time when the airline's yields are decreasing and costs are expanding.

Interjet has always billed itself as Mexico’s value airline and its traffic and passenger levels continue to grow, but it faces an uphill climb in its quest to return to profitability as its lower cost rivals continue to compete fiercely in Latin America’s second largest aviation market.

Interjet faces a raft of challenges, ranging from fleet issues to tax woes

Interjet launched operations back in 2005 as Mexico’s aviation industry was undergoing deregulation.

It was one of three new airlines making its debut in the country in the mid-to-late 2000s, joining the ultra low cost operators Volaris and VivaAerobus. All three of those airlines benefitted from the demise of Mexicana, and through Jul-2019 their combined domestic passenger share was 70%.

Interjet has always operated under a slightly different model from those of its lower cost peers, touting a more upscale product while working to maintain a lower cost base than Aeromexico. At one point, Interjet had a 25% passenger share, but Volaris has grown at a faster pace and it appears that VivaAerobus is closing in on Interjet’s third place position.

The airline has been pivoting toward more international growth, but during the past couple of years Interjet has also faced problems with its Superjets, ranging from part defects to engine maintenance issues.

It has grounded 16 of the aircraft, and now reportedly wants to rid itself of its fleet of 22 Superjet narrowbodies.

More recently, Interjet has had to engage in a public relations blitz after Bloomberg quoted the company’s CFO stating that the airline was in technical bankruptcy due to USD27 million the company owes in back taxes. Interjet stated that the report was erroneous, and if it were ordered to pay those taxes, its operations would not be affected.

Interjet’s potentially hefty tax bill occurs just as its losses in 2018 widened to USD134 million from USD13.9 million the year prior. It posted a USD26.9 million loss in 1Q2019.

During 2019 Interjet has also faced labour challenges and has had to cancel some flights due to staffing shortages.

All of those moving parts are creating a tough set of circumstances for Interjet just as Mexico’s economic forecast is weakening. The country’s GDP growth forecast for 2019 has been cut to 1.1%, from previous projections of an increase of 2.2%.

Interjet works to revamp its network as its yields remain weak

Despite those challenges, Interjet is charging ahead in making changes to its network with plans to bolster its service at Mexico City by 40% and establish a hub in Cancún. Those airports are Interjet’s largest and second largest bases measured by departing frequencies. 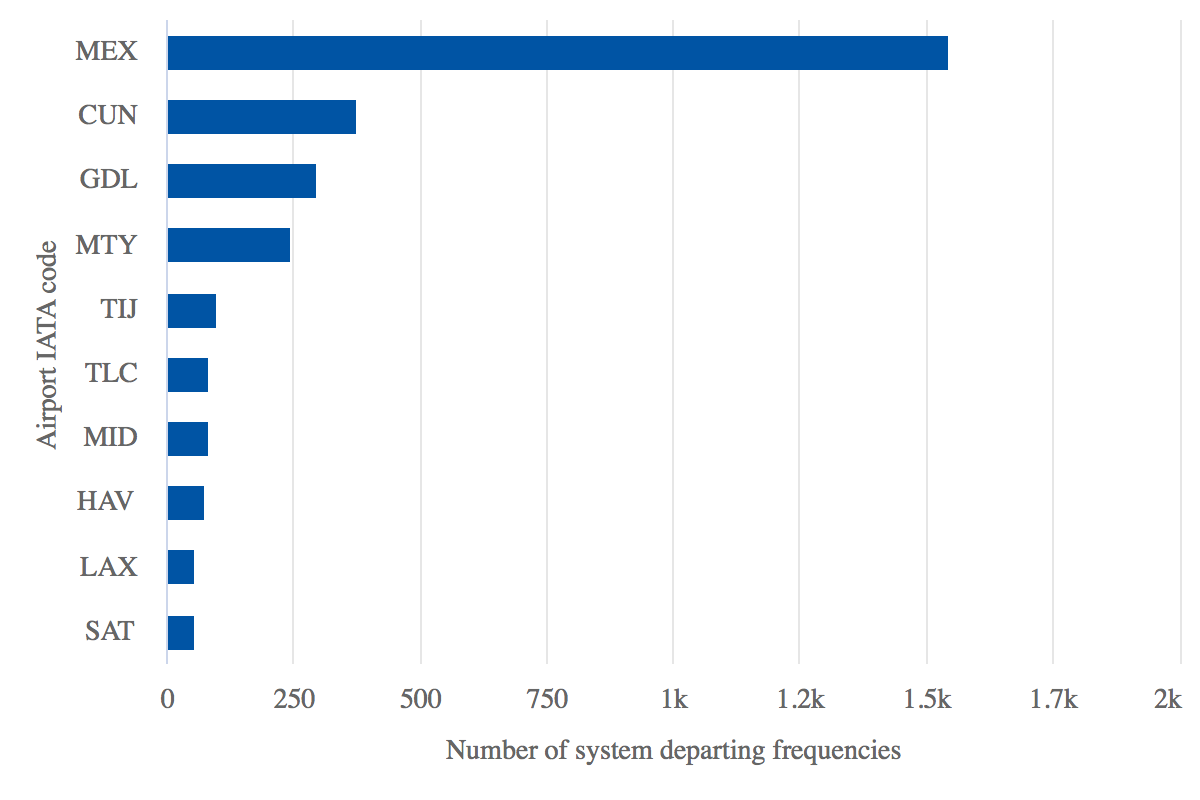 The airline is adding new routes, expanding frequencies to improve schedules for business passengers, and scheduling arrivals and departures in leisure markets to coincide with check-in and check-out times at major hotels.

With those changes, Interjet will grow its seat capacity by 12.5% year-on-year.

It is not clear how much of the increase is geared toward the domestic market but the added capacity, coupled with Mexico’s weakening economic conditions, will create challenges for Interjet in gaining traction in its yield performance. During 1Q2019 its yields fell by 9.8% year-on-year while its topline expenses increased by 6.5%.

Obviously Interjet is attempting to strengthen its schedule to become more competitive in a market that remains highly contested as Volaris and VivaAerobus continue to expand and Aeromexico works to leverage its position as Mexico’s only global airline.

Interjet also faces an uphill climb in redefining itself – given its precarious financial state. In late 2018 Bloomberg reported that the airline’s net debt to EBITDAR was 11.1, which is well above those of its rivals.

Even as Mexico has substantial upside in passenger growth — its domestic trips per capita in 2018 were 0.40 (according to Volaris) – there are questions as to whether the country needs one full service airline, two ULCCs, and one value carrier.

Privately held Interjet faces some daunting tasks in turning its business around, and it remains to be seen whether the airline can right its financial ship, rid itself of ineffective aircraft, and create a network that is viable over the long term.

As Interjet moves to strengthen its business, its aggressive competitors will continue to maintain their respective advantages. Recent industry dynamics have drastically altered the aviation industry in Mexico and will undoubtedly continue to do so over the next few years.