The Lion Air Group has a massive 600 aircraft on outstanding order following its landmark order for 234 A320 family aircraft, which was signed on 18-Mar-2013. The figure at first glance seems overly ambitious given the intensifying competition in Southeast Asia’s low-cost carrier market. But Lion enjoys a very strong position in its massive and fast-growing home market of Indonesia, which could easily support, over the next decade, at least half of the additional aircraft it has committed to acquiring.

The group also has the option of placing some of the 600 aircraft it has on outstanding order with airlines outside Lion through its new leasing subsidiary. This gives Lion unique flexibility should its growing portfolio of airlines not require all 600 aircraft for their own growth and replacement needs.

Lion has talked about new potential affiliates in other Southeast Asian countries and Australia. But establishing such ventures could be challenging given its brand is not well known outside Indonesia. AirAsia has a more powerful pan-Asian brand and also has first mover advantage in every market except Indonesia.

As Indonesia is by far the largest market in Southeast Asia, Lion has been able to quietly surpass AirAsia as a larger airline group based on seat capacity within ASEAN. But Lion is predominately a domestic carrier while AirAsia is much larger in the international market, including to and from Indonesia.

The Lion Air Group currently has an active fleet of 125 aircraft, according to CAPA’s new fleet database. This includes 123 aircraft in Indonesia – 94 at Lion mainline 29 at Wings Air – and two in Malaysia at Malindo. 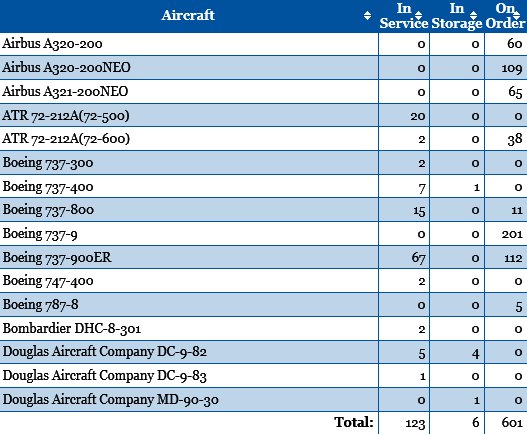 Given the projected growth of the Indonesian domestic market, the Lion Air Group will need approximately 300 aircraft in Indonesia by 2018 simply to maintain its current share of the market. As Lion has ambitions to grow its domestic market share and to become a more significant player in Indonesia’s international market, a 400 aircraft fleet by the end of 2018 in Indonesia between its Lion, Wings and Batik brands is a feasible scenario.

The group now allocates 96% of its seat capacity to the Indonesian domestic market. Lion currently only has a 5% share of seat capacity in Indonesia’s international market, compared to about 25% for the AirAsia Group and about 16% for Garuda, according to Innovata data. Lion is keen to close the gap with its rivals internationally while maintaining the big gap it now enjoys domestically over its largest competitors.

Lion Air Group projected deliveries for aircraft on order: 2013* to 2028 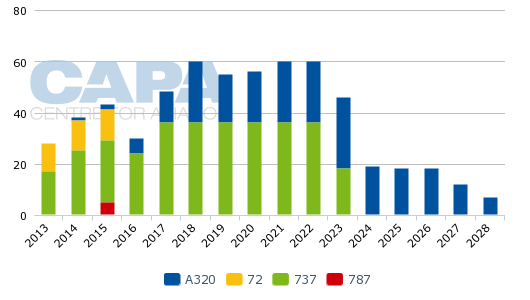 Note: only includes aircraft coming directly from OEMs. 2013 figures reflect aircraft to be delivered the remainder of this year
Source: CAPA – Centre for Aviation

As a result the Lion Air Group will likely have a fleet of about 350 aircraft at the end of 2018, taking into account the expected phase out of its approximately 20 older generation aircraft. Lion’s existing portfolio should be able to support such growth, with between 250 and 300 aircraft in Indonesia and the remainder in Malaysia.

Malindo plans to have a fleet of 12 737s by the end of 2013 and add approximately one aircraft per month over the medium to long term. This would give Malindo a fleet of about 70 aircraft by the end of 2018, which is slightly bigger than the current size of AirAsia’s Malaysia-based A320 fleet.

The Malindo fleet plan could prove to be overly ambitious given the size of the Malaysian market. But Lion could also establish affiliates or subsidiaries in other countries.

Lion to accelerate rate of aircraft deliveries from 2017

Lion would potentially benefit from a bigger portfolio of carriers by the end of this decade given that the rate of deliveries from both Airbus and Boeing will increase in the 2017 to 2018 timeframe. Lion now plans to take 36 737s per year, or three per month from 2017, compared to its current rate of 24 737s per year, or two per month. Meanwhile, Lion’s rate of A320 deliveries will reach 24 per year in 2018.

But even if Lion does not succeed at establishing more affiliates, it has sufficient options for all the aircraft it has ordered. While taking narrowbody jets at a rate of 60 aircraft per year seems astronomical, that would equate to annual fleet growth late this decade of between 15% and 17% – a plausible figure given the recent growth trajectory of the Southeast Asian market. Lion could also start to phase out its 737NGs during this period which would allow it to grow its fleet in the 10% to 15% range.

Lion also has the option of leasing out aircraft to other carriers as the group has established a Singapore-based leasing company, Transportation Partners. Transportation Partners so far has only placed aircraft with airlines within the Lion Air Group. But the new lessor recently established a sales and marketing division and plans to eventually lease aircraft to airlines outside the Lion Air Group.

Transportation Partners is not expected to place its own orders and instead have access to a portion of Lion’s order book, including some of the just-ordered 234 A320s and the 230 737s ordered in Nov-2011. But it is not yet decided what portion of Lion’s order book may be allocated to Transportation Partners for third-party transactions or when the first batch of aircraft will be made available to other carriers.

Given the in-house requirements for Lion, Batik, Wings and Malindo over the near to medium term, it is unlikely a large number of aircraft (if any) will be made available to other carriers until Lion’s rate of narrowbody deliveries reach the 60 aircraft per year rate in 2018. Even then Lion may not have the need to use Transportation Partners to place aircraft outside the group, depending on what market conditions are like in Indonesia and Malaysia at that time and whether the group launches any new subsidiaries or affiliates in new markets.

Several leasing companies, including lessors which have been working with Lion on 737 sale and lease backs, tell CAPA they do not expect Transportation Partners to emerge as a major competitor and believe airlines will be reluctant to lease aircraft from a Lion Air Group company, particularly airlines in Asia. Leasing to outside companies could be a fall back option should Lion end up with more aircraft than they need for their own group of companies, a scenario which is unlikely to occur at least for the next several years.

Lion has over 200 more outstanding orders than AirAsia

The AirAsia Group, which consists of affiliates in four Southeast Asian countries and Japan, currently operates 121 A320s. As this includes five leased aircraft, it has commitments remaining for 387 additional aircraft compared to 601 for the Lion Air Group.

Unlike Lion, the AirAsia Group has not yet diversified by adding Boeing to its all-Airbus fleet and has not yet added regional aircraft. But AirAsia, which previously has considered the Bombardier CSeries and 737, could eventually add a second aircraft type and commit to more aircraft to close the gap with Lion.

AirAsia in 2013 is growing faster than Lion as AirAsia is keen to regain its status as the largest LCC group within Southeast Asia. The AirAsia Group is adding 32 A320s in 2013, including 29 at affiliates in Southeast Asia, for a year-end total of 150.

In comparison Lion is only expected to add six 737s in 2013 as it allocates a majority of its deliveries to Malindo and Batik. But Wings Air is expected to take delivery of 12 ATR 72s in 2013.

Overall the LCC fleet in Southeast Asia is expected to grow in 2013 by between 20% and 25% to approximately 520 aircraft. Roughly 100 aircraft will be added, intensifying competition and potentially resulting in over-capacity in some markets such as Malaysia.

Note: Rank based on current fleet size.. List based on individual carrier/AOC rather than group
Jetstar Group fleet plan for 2013 still in process of being finalized
*AirPhil recently re-branded as PAL Express
Source: CAPA – Centre for Aviation fleet database and company reports

Lion’s latest order, and the AirAsia order from Dec-2012, means the LCC fleet in Southeast Asia will continue to grow at similar rapid clips over the medium to long term. While LCCs have already captured over 50% of passenger traffic within Southeast Asia large growth opportunities remain given the rapid growth in the region’s economy and middle class.

The orders placed over the last two years by AirAsia and Lion are eye-popping given their huge sizes and fact that traditionally airlines order aircraft in smaller bunches with deliveries spread out over shorter periods. But Asia is different. The growth trajectory is unrivalled and the cultures and strategies of the region’s largest LCC groups are unique. AirAsia and Lion will likely prove the sceptics wrong and successfully place into service all the aircraft they have committed to acquiring.