Investors in airports have long been confused by government policies in Indonesia where they have, in theory, been welcomed, even coveted, but where the state airport operators continue to acquire those airports around the country that might attract those investors.

At last a consortium, involving an Indonesian company with experience in the air transport business and a Singaporean one of international repute, has acquired a concession on an airport which supports tourist visits to see the ‘Komodo dragons’ – huge lizards that were only discovered in the 20th century.

But the transaction came just as the government was about to close off the Komodo island and then to bring in a hefty tourist charge to visit it – not what the joint venture wanted to hear.

Indonesia's Transportation Minister, Budi Karya Sumadi, said that the government had awarded the development and operation for 25 years of Labuan Bajo Mutiara Airport (also known as Komodo Airport) to a consortium of PT Cardig Aero Services and Changi Airports International.

This is the first time that a consortium involving a foreign company has been appointed to operate an airport in Indonesia. It was the only bidder.

As long ago as Sep-2014 CEO and President Diono Nurjadin advised that the company was planning to expand its services into airport management as part of a wider growth programme. He pointed out that the state operators PT Angkasa Pura I and PT Angkasa Pura II controlled the airport management market in Indonesia, noting "[the market] has been opened for quite a while, but there haven’t been really any private-sector companies tapping into the sector". He added that, "the prospects are really good" for a private company to operate and manage airports in the country.

Perhaps so, but it took the company five years to secure its first – and so far only – deal.

The other partner, Changi Airports International, is much better known. CAI has been an operator of, consultant to, and selective investor in, airports outside Singapore for many years. It is currently involved in one capacity or another with airports in Southeast, North and West Asia, and in Latin America.

The difficulties facing both parties in identifying business opportunities among Indonesia’s myriad of airports – there are 675 or so airports altogether, though many are no more than grass strips – can be summed up in this quote from the CAPA Airport Privatisation & Finance Review, published in Aug-2018:

“There seems to be a piecemeal and uncoordinated approach to privatisation in Indonesia, involving the expansion of the two state airport operating companies PT Angkasa Pura I and II (especially II, which is to be privatised itself) and the encouragement of private sector interests. Some European and other western investors still tend to be wary of opportunities in this part of the world, where the business culture is quite different and messages about prospects and the procedures to handle their sale or concession tend to be mixed.”

This has been the case while these two state operators have been gobbling up smaller regional airports. Indeed, PT Angkasa Pura II requested permission to operate Labuan Bajo Mutiara Airport in 2018, around the time an (unknown) Australian airport operator was being sounded out by the Transport Minister to operate it jointly. Another indicator of a lack of coordination?

In a way that would be understandable as at least one of the two state organisations is in line (and has been for a while now) for privatisation itself. The government would want to keep it as influential and powerful as possible, especially if there were to be an IPO.

So AP II, in particular, is expanding both domestically and internationally. AP I not so much, but it did take over the management of Labuan Bajo Mutiara Airport in 2018!

While this is going on the government has been inviting both the domestic and international private sectors to participate in investment in new airport projects such as the Singkawang Airport project in West Kalimantan, via public-private partnerships (PPP) and particularly targeting Malaysian investors. The initiative aims to reduce the dependence of financing major infrastructure projects on the state budget.

Potential investors were told that they could participate in terms of physical infrastructure, runways, and technical equipment.

Then, right at the end of 2019, that message was ratcheted up further when the Transport Minister said Indonesia could offer more airport management projects to foreign investors in 2020, including Medan Kualanamu International Airport, Manado Sam Ratulangi Airport and (again) Singkawang Airport. The minister added, though, that the first two airports would need investment of up to IDR8 trillion (USD573 million).

The key development where Labuan Bajo is concerned was a Feb-2018 decision by Indonesia's Coordinating Minister for Political, Legal and Security Affairs to consider handing over airports in Jakarta, Silangit, Labuan Bajo and the Bangka Belitung islands to be privately managed. The Minister cited Turkey's Istanbul Atatürk Airport as an example of a successfully privately managed state-owned infrastructure asset, although it is hard to see how Atatürk, which has since closed, could be compared to smaller Indonesian airports like Labuan Bajo.

It is highly likely that before any non-Indonesian investors commit to any deal to operate any other airport in the country their due diligence will include the Labuan Bajo Mutiara Airport agreement.

So what would be the attraction of this airport to PT Cardig Aero services and CAI?

The airport's name comes from Labuan Bajo's status as a departure point for tours to the nearby Komodo National Park – home of the Komodo dragon and a UNESCO World Heritage site.

The Komodo dragon is a species of lizard found in the Indonesian islands of Komodo, Rinca, Flores, and Gili Motang. It is the largest existing species of lizard, growing to a maximum length of three metres and typically weighing 70-90 kilograms. While they have been known to attack humans their rarity and the fact they may be the remnants of an extinct species will guarantee tourism in a world becoming obsessed with conservation.

There are other tourist attractions such as diving and rare pink sand beaches in the area but this transaction takes place just as the Komodo Island is closed to tourists for the initiation of a conservation programme, and there is talk of charging future tourists high fees to visit it.

There is nothing else there: the original Komodo people are now extinct and the present-day inhabitants are descended from criminals who were exiled there. That fact won’t be highlighted in the tourist brochures.

Investment by several airlines has forced up passenger numbers dramatically

Passenger traffic at the airport was steady at around 150,000-200,000 per annum through most of the past decade, then increased suddenly after Wings Air added services in 2018, along with services from Batik Air Lion Air and Malindo Air, all of which positively influenced both domestic and international tourist arrivals. 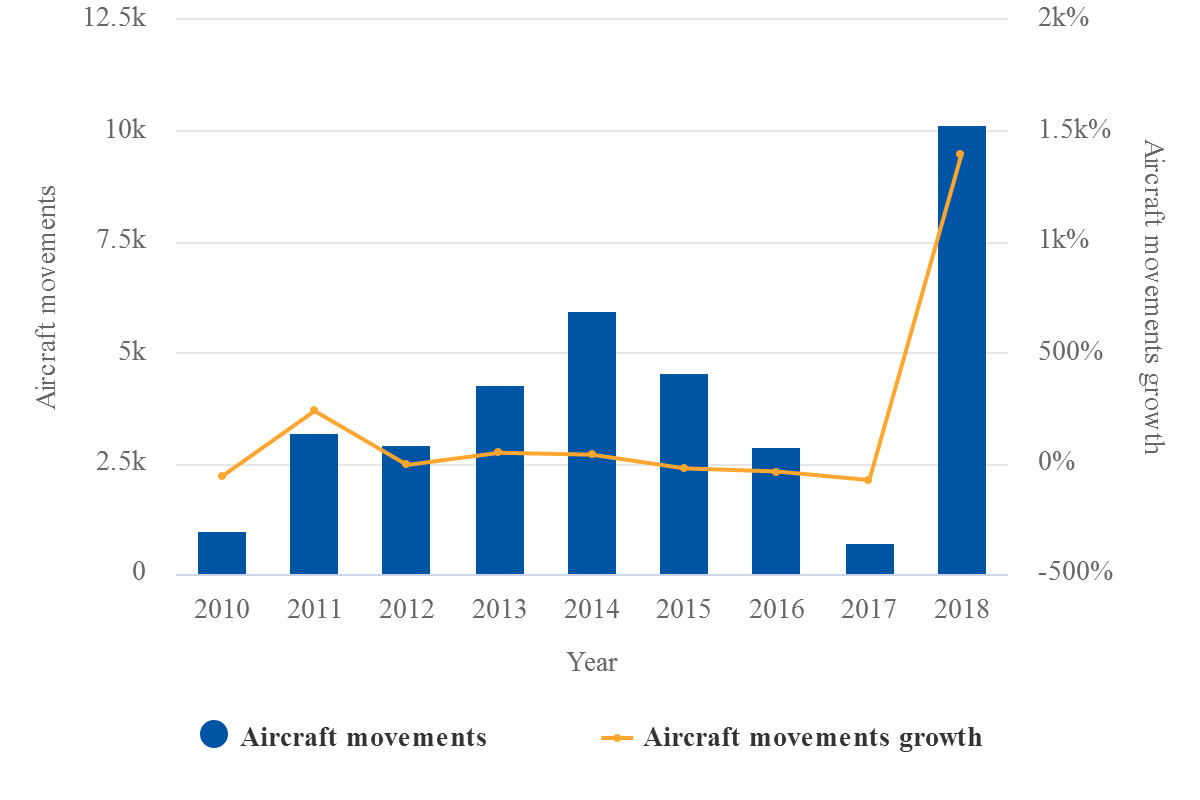 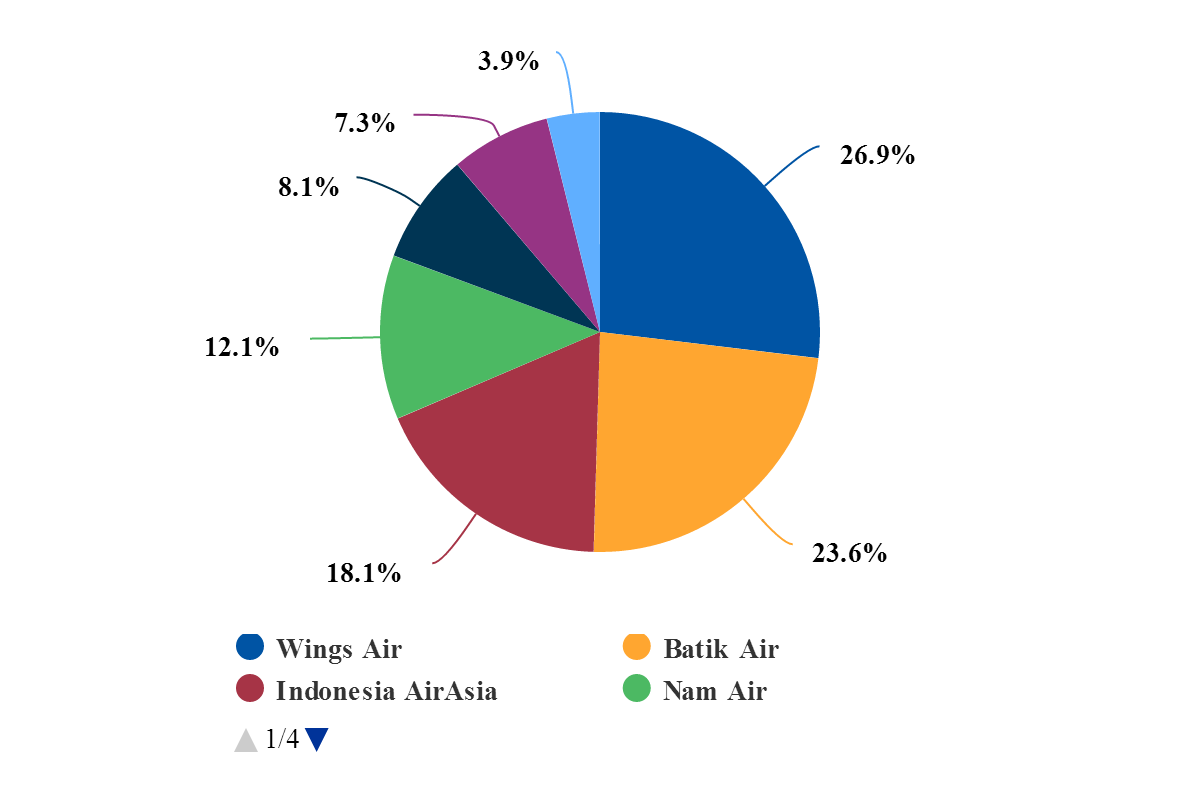 The route network is quite comprehensive, although wholly domestic, despite the announcement of an international route from Malaysia in 2019.