Indonesia has emerged as a popular tourist destination, with visitor numbers increasing by 21% in 2017. China has become Indonesia's largest source market, driving rapid growth in the Bali-China market.

Total international passenger traffic at Indonesia’s airports increased by 12% in 2017, to 34.2 million, according to Indonesia DGAC data.

Growth in tourism has accounted for nearly all the growth in Indonesia’s international market in the past four years. Visitor numbers to Indonesia have increased by 49% over the past four years, from 9.4 million in 2014 to slightly more than 14 million in 2017. Visitor numbers surged by 21% in 2017, representing the fastest growth in more than a decade.

Annual visitor numbers to Indonesia and year-over-year growth: 2008 to 2017 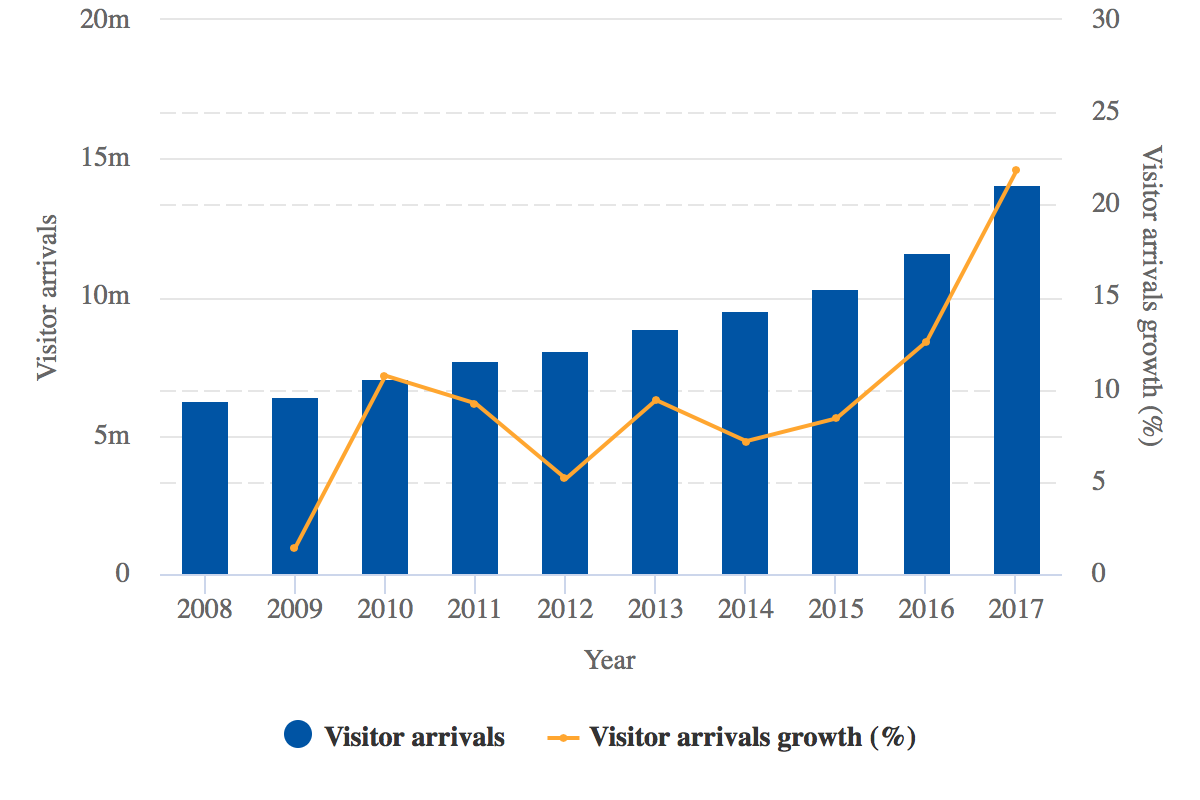 Indonesia used to have inbound and outbound markets of broadly equal size, but its emergence as a popular tourist destination has changed the mix considerably.

In 2017 visitors accounted for approximately three quarters of total international passengers. An exact figure cannot be calculated as the 14 million visitors include some visitors arriving by ferry from Malaysia and Singapore, but the vast majority of visitors to Indonesia, an archipelago, arrive by air.

There are currently 19 airports in Indonesia with scheduled international flights, according to CAPA and OAG data. Jakarta and Bali dominate Indonesia’s international market, accounting for approximately 44% and 34% of the current total international seat capacity respectively.

Based on 2017 passenger data from the DGAC, Jakarta’s Soekarno-Hatta Airport accounted for 43% of total international passengers and Ngurah Rai Airport on Bali accounted for 32%.

The Jakarta and Bali markets are vastly different. Jakarta, one of the world’s biggest cities, is a large business market and also attracts significant outbound leisure and ethnic traffic. In Bali the market consists almost entirely of inbound leisure passengers.

There is now almost as much capacity from Bali to China as to Australia, which has historically been the largest source market for Bali’s tourism industry. Although Australia is a much more mature market, Australian visitor numbers to Indonesia have continued to increase rapidly over the past two years.

Australia overall is Indonesia’s fourth source market after China, Singapore and Malaysia. India and Japan, the next largest source markets, are much smaller but both have been growing. There has been particularly fast growth in the India-Bali market over the past two years.

Bali’s proportion of total Indonesia international passenger traffic was only 26% in 2013, compared to 32% in 2017. This is another indication of the fast-expanding role of tourism in Indonesia’s international market.

Surabaya and Medan, the second and third largest cities in Indonesia, are mainly outbound markets but are relatively small. Medan currently accounts for only 7% of international seat capacity and Surabaya accounts for 6%.

Medan and Surabaya both handled approximately 2 million international passengers in 2017, accounting for 6% of total international traffic. There is huge potential for international growth from both these cities, given their large size and Indonesia’s expanding middle class population. Medan also has tourism potential as it is the gateway to Sumatra, where Lake Toba is located. Lake Toba is one of Indonesia’s most popular tourist spots.

Foreign airlines have typically dominated Indonesia’s international market and they currently account for more than 60% of international seat capacity in Indonesia.

Garuda is the largest international airline, but AirAsia as a group is bigger

The AirAsia Group is still the market leader, when affiliates or subsidiaries based in other countries are included. Malaysia AirAsia is the largest foreign airline in the Indonesian market. AirAsia, as a brand, currently accounts for 22% of total international seat capacity in Indonesia, according to CAPA and OAG data.

Garuda Indonesia currently accounts for 14% of international seat capacity. The Garuda Group’s capacity share is 15% when the small international operation of its LCC subsidiary Citilink is included.

Citilink, Lion and Batik expand from low base

Citilink carried only 46,000 scheduled international passengers in 2017, according to Indonesia DGAC data. However, Citilink is pursuing international expansion in 2018.

In late Mar-2018 Jakarta-Penang became Citilink’s second international route after Jakarta-Dili, which was launched in 2017. Citilink is planning to launch services from Jakarta to Bangkok and Singapore within the next couple of months.

The Lion Group currently accounts for a 13% share of total international seat capacity in Indonesia, according to CAPA and OAG data. This includes a 3% share for the group’s Malaysia-based affiliate, Malindo Air, which operates several routes from Malaysia to Indonesia and also has two fifth freedom routes from Indonesia to Australia. Malindo is one of the largest foreign airlines presences in the Indonesian market, behind Malaysia AirAsia and Singapore Airlines.

Rapid growth in the inbound segment would generally make it hard for local airlines to increase international market share. Foreign airlines are typically better positioned to fly in visitors as they have the advantage of strong brands and distribution networks in their home markets. Foreign airlines currently account for nearly two thirds of seat capacity at Bali, which is the main gateway for tourists.

Scheduled international traffic (millions of passengers) for all Indonesian airlines and load factor: 2005 to 2017

Indonesian airline groups are keen to continue expanding in the international market, recognising the opportunities as Indonesia emerges as a popular tourist destination. However, foreign airlines are also expanding and will continue to make it challenging for Indonesian airlines to achieve profitable growth.

Historically Indonesian airlines have struggled to achieve decent load factors on international routes. In 2017 their average international load factor was only 74%, although this was a slight improvement compared to 2016 and was the highest load factor since 2007 and 2008.

The Indonesian international market has the potential for rapid growth over the next several years, driven by tourism and an expanding middle class. However, local airlines will have to grapple with intensifying competition, both between themselves and with foreign airlines.