Indonesia has one of the world’s largest and most dynamic domestic markets. Domestic traffic in Indonesia has more than tripled over the past 12 years, from less than 30 million in 2005 to almost 97 million in 2017.

The composition of the market has changed considerably. In 2005, the Indonesian airline sector was very fragmented with no single airline or group accounting for more than a 25% share.

The market today is dominated by the Garuda and Lion groups. Lion is the market leader and its share of Indonesia’s scheduled domestic market exceeded 50% for the first time in 2017.

Garuda’s share slipped last decade as Lion expanded, but Garuda was able to regain market share during the first half of this decade due partially to consolidation as several smaller airlines ceased operations. Garuda captured a 33% share of the Indonesian domestic market in 2017, a fall from 38% in 2015 but still significantly up from 19% in 2010.

Indonesia’s domestic passenger market grew by 8% in 2017, to 96.9 million passengers, according to Indonesia DGAC data. In 2016 domestic growth was faster at 17%.

Indonesia currently has the world’s fifth largest domestic market after the US, China, India and Japan. Indonesia overtook Brazil in 2016 but India overtook Indonesia in 2015.

Indonesian domestic growth has been sporadic

The Indonesian domestic market has more than tripled in size since 2005 but the growth curve has hardly been linear. The market expanded particularly rapidly in 2009 through 2012, nearly doubling in just four years with annual growth each year of between 16% and 20%.

However, growth was slow prior to 2009 and has again been relatively slow since 2013. Growth slowed to less than 5% in 2013 and to less than 1% in both 2014 and 2015. Growth has reaccelerated over the past two years but over the past five years domestic air travel in Indonesia is up by a relatively modest 28%. 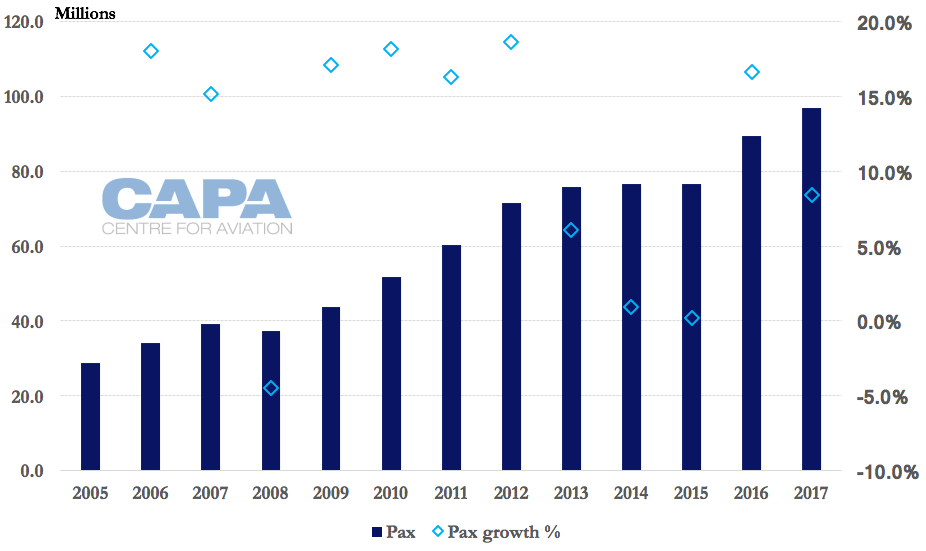 The other five main domestic markets in Southeast Asia have grown faster in the past five years – in some cases much faster. In 2017, Indonesia had slower domestic growth than Myanmar and Vietnam but faster growth than Thailand, the Philippines and Malaysia.

The relatively slow domestic growth in Indonesia over the past five years is partially due to an economy that has been sluggish compared to most of its ASEAN peers. GDP growth was above 6% in 2010, 2011 and 2012 but has since been below 6%. Local demand has also been impacted by depreciation of the Indonesian rupiah.

In 2014 domestic growth was stunted by political instability in the lead-up to presidential elections. In 2015 domestic growth was stunted by the new government’s ill-advised imposition of a price floor in a knee jerk response to the 28-Dec-2014 Indonesia AirAsia crash. The price floor particularly impacted LCCs as they could no longer offer their cheapest fares, and demand suffered accordingly.

The market improved in 2016 and 2017, from a demand perspective. However, overcapacity has been a challenge, pressuring yields, profitability and load factors. 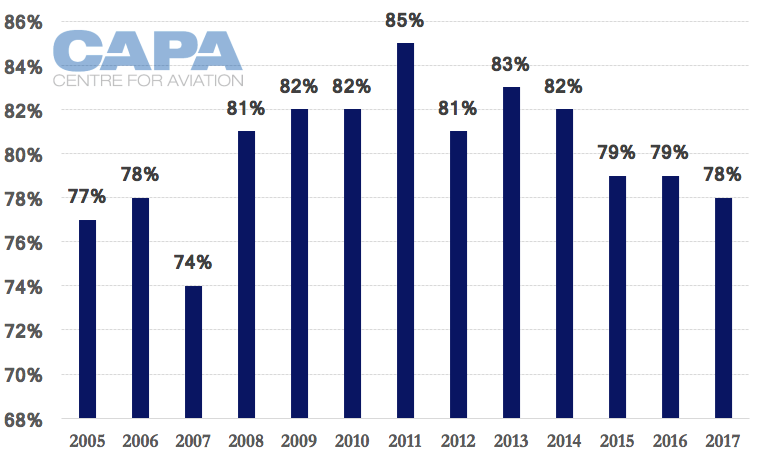 Competition between Indonesia’s two main airline groups, Lion and Garuda, has intensified significantly in recent years, impacting load factors and profitability. Garuda has been competing more aggressively against Lion by rapidly expanding its LCC subsidiary Citilink while Lion began attacking the middle and high end of the market by pursuing rapid expansion at the full service subsidiary Batik Air.

Batik launched operations at the end of 2013 and has since been by far the fastest growing airline in Indonesia. Batik’s domestic passenger traffic grew by 35% in 2017, to 10.1 million, according to Indonesia DGAC data. Batik is primarily a domestic operator; it carried less than 500,000 international passengers in 2017.

Batik has quickly captured a more than 10% share of Indonesia’s domestic market. However, its parent Lion Air’s share has been on the decline as its traffic has been flat over the past five years. Lion Air carried only 2% more passengers in 2017 compared to 2013.

Lion Group’s market share slipped in 2014 and 2015 before recovering in 2016 and exceeding 50% for the first time in 2017. This is a major achievement for Lion, which has been striving to reach 50% market share for several years but was set back by intense competition and relatively unfavourable market conditions.

Lion Group’s 51% share for 2017 includes 6% for its low cost regional subsidiary Wings Air. Wings has been operating since 2003 but has accelerated expansion over the past two years, growing traffic by more than 70% as it expanded its ATR 72 turboprop fleet.

The Garuda Group lost its position as market leader in 2005 but launched a major attack on the domestic market in 2011 by pursuing rapid growth at Citilink and the parent airline. Citilink launched in 2001 as a unit of Garuda but was very small until 2012, when it became its own company and started operating under its own AOC.

However, Garuda has stopped pursuing domestic growth in the past two years. The parent airline's domestic passenger traffic was relatively flat in 2016 and 2017 – as growth in the overall domestic market reaccelerated.

Citilink has continued to expand the past two years but at a slower rate, and only slightly faster than the overall market average. With the parent airline halting growth, the Garuda Indonesia Group’s share of the domestic market dropped to 35% in 2016 and 33% in 2017.

Note: *Citilink counted under Garuda until 2012, when it transitioned from a Garuda unit to a separate airline with its own operator's certificate.
Indonesia AirAsia domestic share includes flights operated by Indonesia AirAsia X.
Batik Air and Nam Air launched in 2013.
Source: CAPA - Centre for Aviation & Indonesia DGAC.

The third of the main airline groups in Indonesia, Sriwijaya, captured a 13% share of the domestic market in 2017. The fourth largest competitor, Indonesia AirAsia, captured only a 2% share. Sriwijaya is mainly a domestic airline whereas Indonesia AirAsia focuses mainly on the international market.

Sriwijaya has gained market share over the past two years, driven partially by expansion at the regional subsidiary Nam Air. Sriwijaya has also benefitted from consolidation as several other second tier domestic airlines have ceased operations.

There have been several rounds of consolidation in Indonesia this decade. This enabled market share gains for both the Garuda Group and Lion Group from 2010 to 2015.

Batavia, Merpati and Mandala were relatively large players which ceased operations in 2013 and 2014. At their peak in 2008, these three airlines combined accounted for 29% of the Indonesian domestic market.

Batavia was the third largest domestic airline in Indonesia from 2006 to 2010, when it was overtaken by Sriwijaya. Government-owned Merpati was the fifth largest domestic airline in 2007 (behind Garuda, Lion, Batavia and Sriwijaya) but cut back significantly in its last few years before shutting down entirely. Mandala, which initially suspended operations in 2011 but relaunched in 2012 as a Tigerair affiliate, had nearly a 10% share of the domestic market at one point late last decade.

Other smaller competitors that have ceased operations in recent years include Kalstar, Pelita, and Sky. There are still several small airlines remaining, but they now account for a less than a 2% share of the total scheduled domestic market. Air taxi operators, serving small isolated communities, and charter operators are excluded from these figures.

The Garuda, Lion and Sriwijaya groups now dominate Indonesia’s domestic market and are best positioned to grow as the overall market grows.

Lion will likely post further market share gains in 2018 as both Garuda and Sriwijaya have set a hiatus in the expansion of their fleets.

How fast Indonesia’s domestic market will grow is always hard to predict, as highlighted by the wide fluctuations in growth rates over the past 12 years. However, over time the market will surely continue to expand rapidly, benefitting the two or three main competitors.