Garuda Indonesia has tripled its China capacity over the past three years, while its LCC subsidiary Citilink has launched several charter routes. The Garuda Indonesia Group now has nearly a 40% share of Indonesia-China seat capacity. Citilink plans to begin operating scheduled services to China in late Oct-2018 with an initial three routes, resulting in the only scheduled LCC capacity in the Indonesia-China market.

Inbound tourism to key ASEAN markets, including Indonesia, will be a topic of a panel discussion at the CAPA Asia Aviation Summit in Singapore on 8/9-Nov-2018. For more details on the summit click here.

Chinese visitors to Indonesia and year-over-year growth: 2008 to 2017 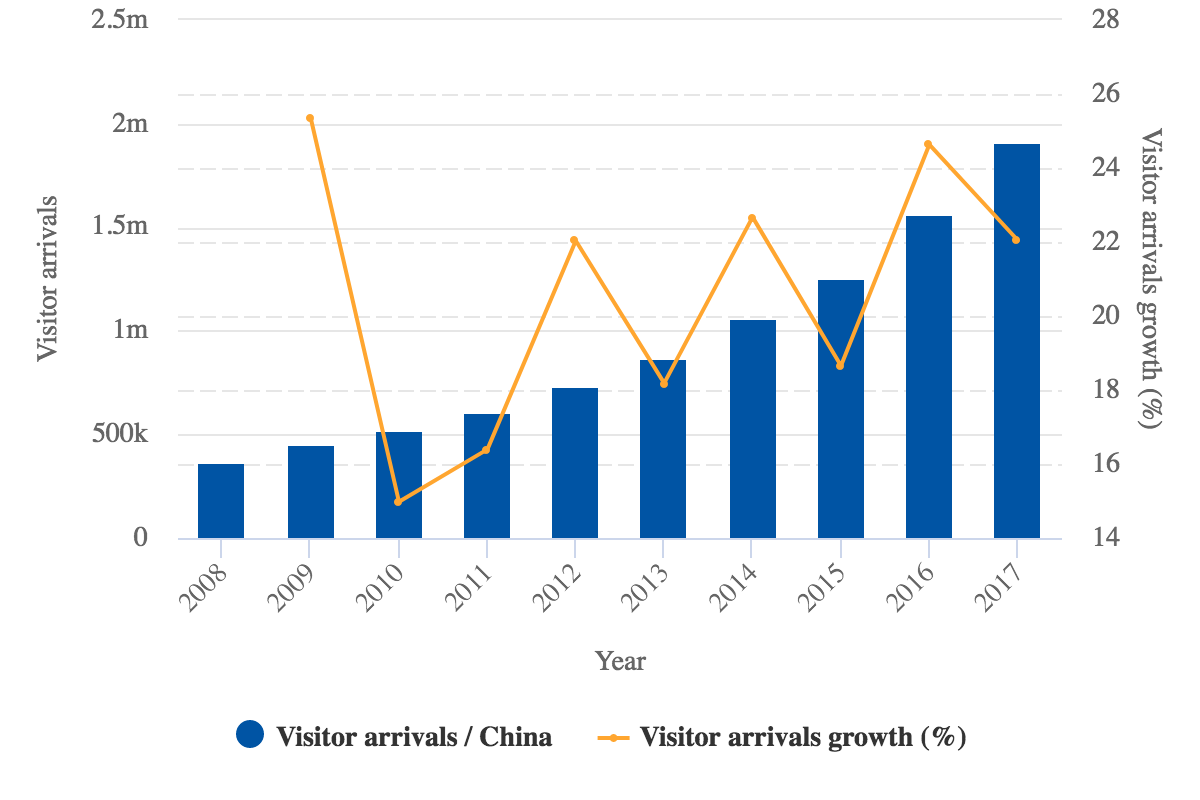 On the popular island of Bali, China overtook Australia last year to become the largest source market. There were 1.4 million Chinese tourist arrivals at Bali in 2017, compared with slightly less than 1 million in 2016.

Chinese visitor arrivals to Bali have more than tripled over the past four years (2013 to 2017). Australian visitor arrivals increased modestly over the same four-year period but declined in 2015 and 2017 due to volcanic eruptions that led to temporary closures of Bali’s airport, impacting visitor numbers for several weeks.

Bali tourist arrivals from Australia and China: 2013 to 2017 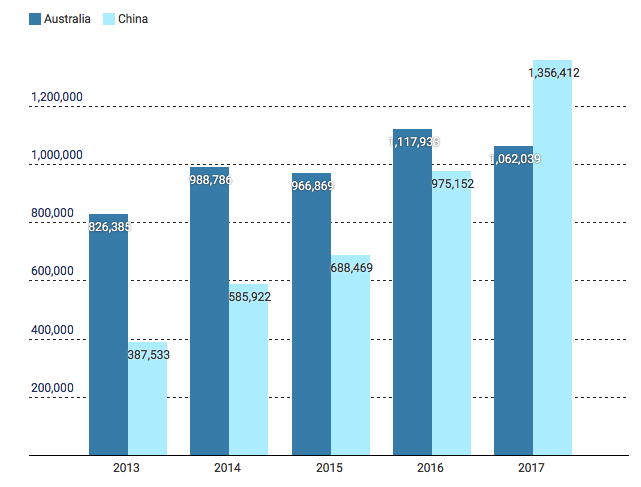 Garuda Indonesia now serves six Chinese destinations from Bali – Beijing, Chengdu, Guangzhou, Shanghai, Xian and Zhengzhou – and the main cities of Beijing, Guangzhou and Shanghai are also served from Jakarta. Garuda uses A330s on eight of its nine China routes, including on all six Bali routes; only Jakarta to Guangzhou is currently served with 737-800s.

All nine of these routes are served on a scheduled basis. In addition, Garuda operates seasonal low frequency charter services from Bali to a few Chinese destinations.

Indonesia’s largest LCC, Lion Air, currently has approximately 13,000 one-way weekly seats from Indonesia to China, including more than 8,000 seats from Bali to China. Three years ago, Lion did not have any Indonesia-China capacity as it only began operating services to China in Nov-2015.

Lion has quickly become the single largest airline in the Indonesia-China market – although Garuda as a group is larger than the Lion Group. Lion currently accounts for a 27% share of Indonesia-China seat capacity, based on CAPA and OAG data for Oct-2018.

Lion now serves close to 20 Chinese destinations – although not all are operated year-round, and none are served daily. Lion currently operates 13 China routes from Bali, six from Manado, two from Jakarta, and two from Surabaya.

Jakarta and Surabaya are Indonesia’s two largest cities and are not generally considered to be major tourist destinations. Manado is a fast growing emerging tourist destination that Lion Group has been promoting as an alternative to Bali. Lion owns hotels in Manado.

Over the past year Lion has been using its new fleet of 737 MAX 8s, which offer improved range compared to its fleet of 737-800s and 737-900ERs, to operate deeper into China. As CAPA highlighted in a 5-Sep-2018 analysis on low cost long haul narrowbody operations, Lion currently has the longest low cost narrowbody route in Asia Pacific.

Lion has two Bali-China routes (Tianjin and Jinan), which have a scheduled time of at least seven hours; it has several other China routes that are more than six hours.

All of Lion’s China services are operated as charters, with Chinese travel agents block booking all seats. Lion does not generally sell its China services on its website or through its normal Indonesian distribution channels. Lion is mainly a domestic airline and only has scheduled international services to Malaysia and Singapore, catering chiefly to outbound Indonesian passengers.

The Indonesian LCC Citilink has also pursued rapid expansion in the Bali-China market using its new fleet of A320neos, which offer improved range over its A320ceos. Citilink operates Bali-China routes with scheduled flying times of up to seven hours.

Citilink began serving China three years ago and has since expanded rapidly. It operated nine Bali-China routes during peak periods this summer, generating over 12,000 one-way seats (according to OAG data). Citilink has around 5,000 weekly one-way seats in the Indonesia-China market in Oct-2018 (typically an off-peak month); all 5,000 of these seats are from Bali.

So far all of Citilink’s China services have been operated as charters, relying on Chinese agents, as is the case with Lion. However, Citilink is now preparing to launch scheduled services to China.

Citilink recently announced plans to operate scheduled services from Jakarta to Kunming and from Bali to Nanjing and Xiamen, effective late Oct-2018. These three routes will become the only scheduled LCC services in the Indonesia-China market.

Kunming, Nanjing and Xiamen are all large secondary cities in China which should have enough independent travellers to support scheduled services. Chinese residents in smaller secondary cities and tertiary cities are more likely to rely on package deals from agents when travelling overseas.

Citilink could codeshare with Garuda on new China flights

Operating the new China routes as scheduled services has the potential advantage of carrying the Garuda code. Citilink and Garuda are in the process of implementing a codeshare on selected domestic routes, which will likely be extended to Citilink’s international destinations.

Batik, a full service subsidiary of the Lion Group, has a very small presence in China and currently only operates only one service – a once weekly charter from Jakarta to Guilin. Sriwijaya, Indonesia’s third largest airline group, has a larger operation to China but also only serves the market with charters.

Sriwijaya began operating to China in early 2018 and during peak periods this summer had nearly 8,000 weekly one-way seats on 15 China routes (according to OAG data). Most of Sriwijaya’s China services operate from Bali, although during peak periods this summer Sriwijaya also had two routes from the small tourist island of Bintan and two from Jakarta.

Sriwijaya is primarily a domestic airline and has only two scheduled international routes – Bali to Dili and Medan to Penang.

Somewhat surprisingly, Indonesia AirAsia, a small domestic player but the second largest international airline in Indonesia (slightly smaller than Garuda), does not yet have any services to China. AirAsia is the biggest foreign LCC group in the Chinese market and Bali-China services would supplement its strong presence in the Malaysia, Thailand and Philippines to China markets.

Xiamen Airlines entered the market in 2013 and has since grown consistently. Xiamen currently has approximately 3,500 weekly one-way seats to Indonesia.

China Eastern operates daily services to Bali from both Beijing and Shanghai but only serves Jakarta from Shanghai (with just four weekly services).

Chinese airlines have a particularly weak presence in the Bali-China market, accounting for approximately a 20% share of seat capacity. Over 30 Chinese cities are now served from Bali (includes seasonal charters), but Chinese airlines only currently serve Bali from five cities.

It is inevitable that Chinese airlines will add services to Bali as Bali-China demand continues to grow rapidly. Several smaller Chinese airlines (including LCCs) will also likely start to link secondary and tertiary Chinese cities with Bali; routes which are now primarily served with charter services from Indonesian operators.

Indonesian airlines are also well positioned to continue expanding in the Bali-China market to cater to surging inbound demand. They are also keen to launch new routes to China from alternative or up and coming Indonesian destinations, which the Indonesian government is keen to promote as part of an overall tourism push.

Indonesian LCCs are particularly well placed as Indonesia-China is generally a price sensitive market consisting of leisure passengers. Citilink and Lion have discovered that China services help boost utilisation as they are able to use aircraft that fly on domestic routes during the day for China services at the back of the clock.

China has also generally been a profitable market for Citilink and Lion, offering a reprieve from challenging domestic market conditions and with little or no risk, as Chinese agents block book all or most of the seats. Pursuing expansion in China and tapping into the increasing popularity of Bali in China – the world’s fastest growing outbound tourism market – is a no-brainer for Indonesian LCCs.