While the Indian LCC IndiGo is pausing its growth in the short term due to the COVID-19 crisis, the airline intends to pick up where it left off when demand recovers. Indigo has ambitious plans to expand in international markets in particular, backed by a massive order book that is unscathed by the current industry crisis.

IndiGo was already the largest player in India’s hotly contested domestic market before the pandemic, and since then it has only increased its share. The airline accounted for 57% of domestic traffic in August, according to data from India’s Directorate General for Civil Aviation (DGCA).

The LCC was in better financial health than most of its peers when COVID-19 arrived, and this should put it in better position to exploit opportunities when it decides to resume growth. IndiGo CEO Ronojoy Dutta discussed the airline’s outlook during the latest CAPA Live event on 13-Oct-2021.

The LCC has more than 550 Airbus A320neos and A321neos remaining on order, and it does not plan to slow the delivery schedule down.

However, the focus has shifted from growth to fleet replacement. While IndiGo will continue taking aircraft deliveries from its extensive order book, it plans on keeping its fleet total relatively flat for the near term.

IndiGo will probably not return to significant levels of fleet growth until the end of 2023 or the beginning of 2024, Mr. Dutta said. The fleet total may rise slightly, but in general the airline will be “treading water” for a while, he said.

IndiGo had 100 older A320s it wanted to replace, and this process is now about halfway through, Mr. Dutta said. When this replacement process is complete, there will still be hundreds of orders remaining for growth. Mr. Dutta stressed that the airline had enough schedule plans to accommodate the additional aircraft, and it remains “eager to implement these plans.”

Long term growth will be skewed more heavily towards international

There will also be little network growth for the next 18 months. When network expansion does ramp up again, international services will increase faster than domestic, said Mr. Dutta.

International flights made up about 25% of IndiGo’s operations before the pandemic struck, after rising from 15% a few years earlier. Mr. Dutta estimates that the international share of operations will settle at about 40% within four years. The airline remains “very bullish on international opportunities,” Mr. Dutta said.

The airline has many attractive markets within a seven-hour flight radius of its four main Indian hubs. Mr. Dutta said this range circle extends as far as Moscow, Barcelona, Nairobi, Manila, Beijing and Shanghai. Many destinations such as this are currently served by one-stop options from India, whereas IndiGo would fly them direct.

Among IndiGo’s Airbus orders are 70 A321XLRs, which will allow it to pursue more distant destinations than its current fleet can reach.

Demand has recovered quickly – at least, in the domestic market

IndiGo has increased its domestic capacity to approximately 85% of pre-pandemic levels, Mr. Dutta said. This aligned with capacity limits imposed on all local airlines by the Indian government.

However, on 12-Oct-2021 the government removed the limits altogether.

Domestic demand has bounced back quickly since the second wave of COVID-19 infections subsided in India earlier in 2021. Demand essentially followed a bell-shaped curve, dropping sharply in Apr-2021 to May-2021, but subsequently rising just as quickly. There was a much greater lag in demand response after the first wave of COVID-19 in 2020, said Mr. Dutta. 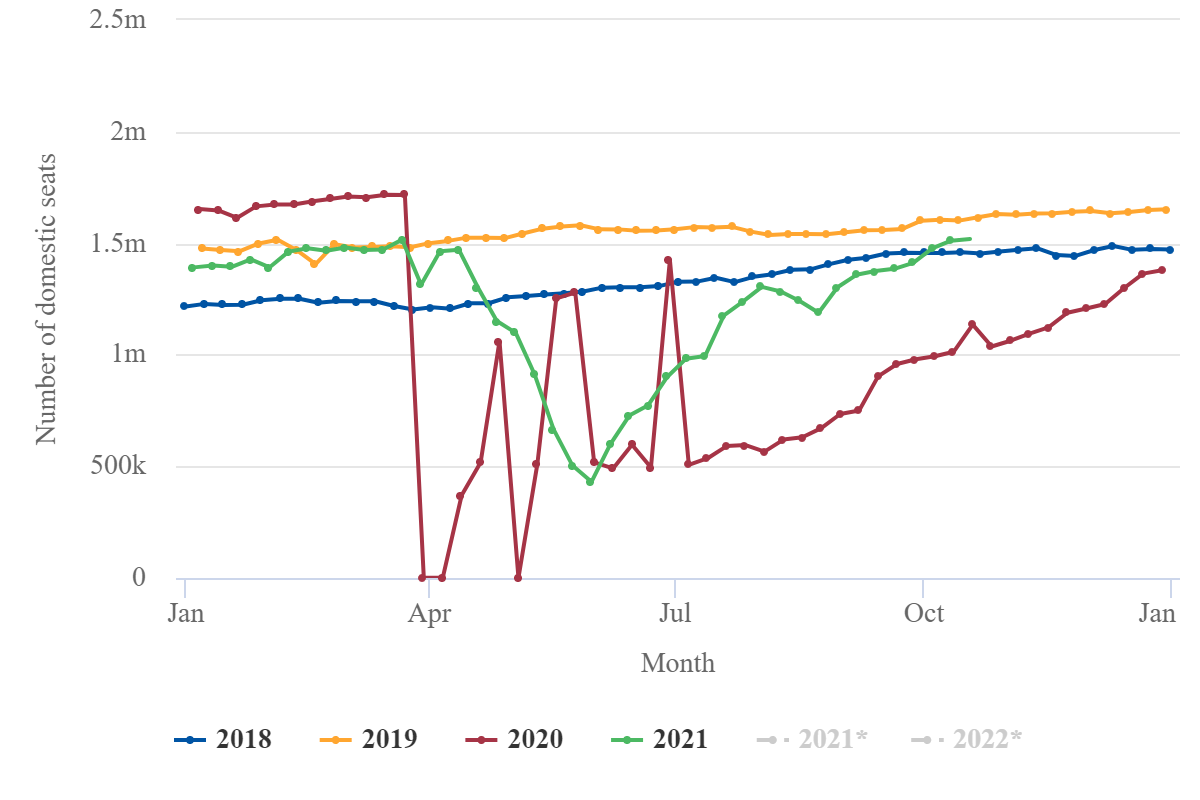 The airline’s international operation has been predictably slower to recover, and it is currently at about 35%-40% of its 2019 capacity. An increasing number of international bilateral travel corridors have been established by the Indian government. Mr. Dutta said IndiGo’s next push is to restore access to the Saudi Arabian and Thailand markets.

One of the most important developments in the Indian market is the privatisation of Air India and the government’s recent selection of Tata Group as the purchaser of the state-owned flag carrier. Mr. Dutta said the sale of Air India is “a very welcome move that should have happened a long time ago.”

Tata Group is also a majority owner of AirAsia India and Vistara, so adding Air India to its portfolio will give it a strong position in the market.

“We see them as a formidable force, but [Air India privatisation] is good for the industry and for the nation”, said Mr. Dutta.

Despite IndiGo’s ambitions to expand internationally, it will not compete head-to-head very much with Air India on such routes. Mr. Dutta noted that Air India targets longer-haul routes to markets such as London and the U.S. with widebody aircraft. And the two airlines will aim at different market segments, with Air India offering full service amenities such as business class and lounges.

New entrant Akasa will not worry IndiGo for some time

A new competitor is emerging in the Indian market, with the start-up LCC Akasa planning to launch in 2022. It is being backed by some veteran former senior executives from other Indian airlines, including former IndiGo President Aditya Ghosh.

However, Mr. Dutta believes Akasa will be much less of a competitive threat, and IndiGo has “good defenses” against LCC new entrants.

Akasa will likely remain relatively small for at least 2-3 years, and “it would be tough for anyone to have lower costs than us” in this market, said Mr. Dutta. IndiGo also has a very extensive network across all cities in India.

IndiGo is a bona fide juggernaut in the Indian airline industry, and that will certainly not change in the post-pandemic period. Its dominance may make life tough for some of the struggling smaller Indian LCCs.

However, the growing footprint of the Tata Group in the airline industry could make it a more effective competitor, particularly since it could potentially cover a wider swathe of the market. Even so, it is likely that IndiGo poses more of a threat to Tata’s plans than vice-versa.

One potential issue for IndiGo – and the other Indian airlines – is the likely return of overcapacity in the domestic market. This was a problem before 2020, and the pandemic period will likely only be a temporary reprieve.

Domestic capacity limits have been removed, and it appears in 2022 there will actually be more airlines in the Indian market than there were before the COVID-19 crisis. This could make consolidation even more pressing for the industry.