India’s new Prime Minister, who was sworn in on 26-May-2014, will lead a government with the first parliamentary majority by a single party in 30 years.

The Bharatiya Janata Party (BJP) has secured a mandate to pursue a reformist agenda and the aviation industry - along with potential investors - is eagerly looking forward to hearing its plans for the sector.

The previous administration pursued a transformational approach to aviation between 2004 and 2007/08, but subsequently lost its way. Over the last six years the government pursued one or two notable initiatives, namely allowing foreign airline investment and encouraging certain state governments to reduce sales taxation on fuel. However, these were the exception rather than the rule.

CAPA offers some suggested actions to show the industry and potential investors that the new government is open for business.

In the later stages of the previous administration, the Ministry of Civil Aviation appeared to be either unwilling or unable to establish a clear direction and to assist the industry through a difficult period. Consequently the sector has languished in recent times.

Liberalisation of the aviation sector had started in FY2004, during the final year of the last BJP-led government. This momentum was continued by the UPA administration which succeeded it in May-2004. Indian aviation was transformed as a result of this reformist period. However, whilst there was euphoria about growth there has been no focus on strengthening institutional capabilities since 2004.

Between FY2004 and FY2014, domestic traffic grew at a CAGR of 14.3%, while international traffic expanded at 10.8%. The total number of annual passengers handled by Indian airports more than tripled during this period, from 49 million to 169 million. Cargo volumes have grown at approximately 8% per annum.

Growth in Passenger Traffic at Indian Airports FY04 to FY14 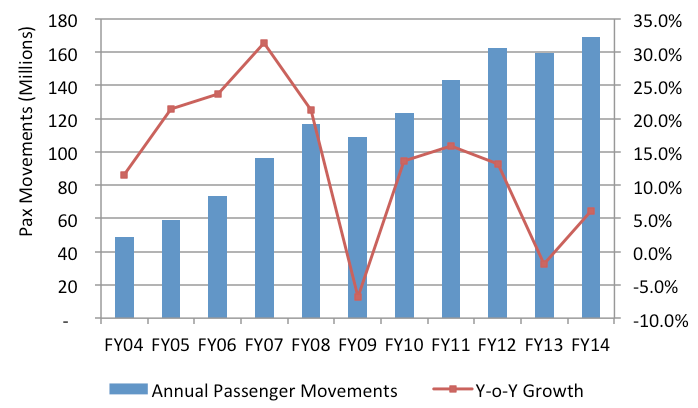 USD30 biilion investment in the aviation sector - a beginning

This growth has been accompanied by close to USD30 billion of investment in the sector including aircraft equipment, airport infrastructure, and ancillary sectors such as ground handling, maintenance and general aviation.

Airlines have on average been offering fares below cost, stimulating traffic above the levels that would ordinarily have resulted at sustainable pricing levels. This has delivered a massive consumer surplus and provided a boost to tourism and trade.

Approximately 40,000-50,000 new jobs have been created directly in the aviation industry. And the economic multiplier impact on other businesses, hotels and tourism operators is estimated to have generated indirect employment for a further 250,000 people.

Airport infrastructure has also improved dramatically as a result of the UPA government’s airport modernisation programme. Six metros and 35 non-metros now have world class airports. As a result, airports which were described by the Naresh Chandra Committee in 2003 as being “for the most part an embarrassment” are now winning international awards.

And despite the challenges experienced in the airline sector there are bright spots such as IndiGo’s success in establishing itself as a sustainably profitable airline with a strong reputation for reliability and service. The LCC has grown to a fleet of almost 80 aircraft in just under eight years and has close to 200 further aircraft on order.

However these economic, tourism and consumer benefits have come almost entirely at the cost of the airlines’ balance sheets

Over the last few years the combination of a high cost environment, a sluggish economy, regulatory constraints and excess capacity have seen Indian airlines post accumulated losses of USD10 billion and increase their collective debt to close to USD20 billion.

India’s carriers combined have cash on hand of approximately USD500 million on annual industry revenue of close to USD10 billion. Some carriers are in a precarious state, with cash balances equivalent to less than one day’s revenue.

CAPA estimates that Indian airlines will need to raise USD1.3 billion of capital in FY2015 just to stabilise their operations.

Airlines are at the core of the aviation value chain and as a result the situation across the industry is quite dismal.

Most airports, other than PPP airports, are losing money; MROs are struggling; ground handlers are challenged; general aviation is chronically sick; cargo and express has stagnated; and the training sector is dysfunctional. Conditions have been deteriorating for some time.

The weakness of the institutional framework is one of the core underlying problems: a national policy is a starting point

India’s weak institutional framework in aviation has led to poor policy and regulatory decisions which have been key contributors to the current challenges.

In the more than 20 years since the domestic aviation sector was first opened up India remains without a Cabinet-approved national aviation policy. Despite numerous well-intentioned attempts, especially since 1997-98, they have not progressed beyond the draft stage.

The absence of a transparent policy – and the consequent regular moving of the goalposts - has kept many serious investors out of the market. Confusion about the economic regulatory framework for airport tariffs at private airports; uncertainty about the criteria for the assessment of airline licence applications; and the lack of transparency with respect to the negotiation and allocation of bilateral capacity entitlements are just some examples of the challenges which operators and investors face.

To some extent the failure to implement a clear vision and policy is because the Ministry of Civil Aviation is itself lacking domain expertise to be able to deal with the complexity of the sector. Policy decisions are further complicated by the government’s continued participation in the industry as an operator in the form of Air India and the Airports Authority of India.

Meanwhile the industry regulator, the Directorate General of Civil Aviation (DGCA) faces an acute lack of resources and skills to be able to conduct appropriate oversight. As a result safety risks have been heightened, a fact reflected in the FAA’s decision to downgrade India to Category 2 status in Jan-2014 due to a shortage of inspectors.

This is all compounded by a very high cost structure due to the impact of taxation, currency weakness and structural issues.

While certain problems will take time to address, there are some quick fixes which could be implemented by the new government to inspire confidence and without great needs for deliberation.

Although solutions to some of the more fundamental problems of the industry could take longer, the above would represent an excellent start, providing an immediate boost to the industry and a clear indication to potential investors that Indian aviation is open for business.

If the government and industry can work with renewed vigour and a resolve to deliver positive change there is every reason to anticipate significant progress.

To receive a complimentary copy of the full 24 page report on CAPA’s Civil Aviation Agenda for the New Indian Administration, please contact Vishal Bhadola on capaindia@centreforaviation.com. The full report includes: