The current yield environment is particularly poor, with July yields down approximately 18-20% relative to the Q1 average, and August expected to see a further 5-8% decline.

The discounting appears to have been in vain as it has failed to stimulate the market and Q2 is likely to see only marginal year-on-year traffic growth. Load factors are similarly expected to see limited improvements.

India's airline pricing regime in Q2 is an indication of the irrational competition which exists in the market and there are no signs of fares stabilising at least until Oct-13. Meanwhile the cost environment remains hostile with high fuel prices compounded by a weak Rupee. There exists an overall systemic weakness with low fares and high costs, and with industry risks at a peak there do not appear to be any clear initiatives underway, either by industry or government, to correct the deteriorating financial situation.

CAPA expects Q2 losses for the industry could reach USD400mn to USD450 million (excluding Kingfisher Airlines which as a listed company will have to release its results even though it is not operating). Air India accounts for the largest share of these losses but as its shortfall continues to be funded by the government the carrier will not be pressing the panic button, especially as its overall financial performance has improved over the last 12 months.

However the ability of India's private airlines to continue to absorb such huge losses is limited and may impact industry dynamics well into the future. With no clear signs of recovery sources of capital are drying up.

The continuing losses, high cost environment and structural instability of the sector are likely to drive away the very few foreign airlines that have shown interest in investing in Indian carriers as the value proposition is weakening. A foreign airline could generate value from a transaction if the deal was accompanied by significantly enhanced market access which suits its strategic interests. However, a sweeping revamp of a bilateral similar to the India-Abu Dhabi agreement, with a manifold increase in seat entitlements, more than 20 points of call in India, unrestricted equipment and permitted change of gauge, may be difficult to replicate.

Nevertheless, even though the conditions are not favourable and the number of interested parties is small in number, we expect that at least one more deal – most likely by a Middle East carrier - is still possible this year subject to the promoters being willing to agree to valuations that are significantly below their original expectations. Qatar Airways may be emerging as the next suitor.

Jet Airways' international division will be strengthened by partnership with Etihad, but loss-making domestic operations are a concern 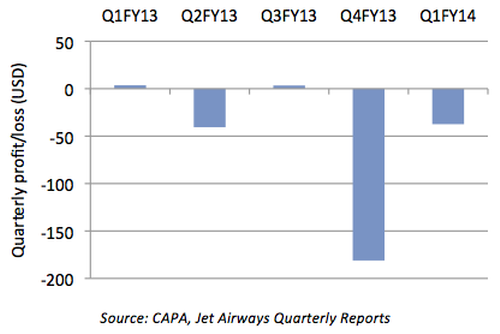 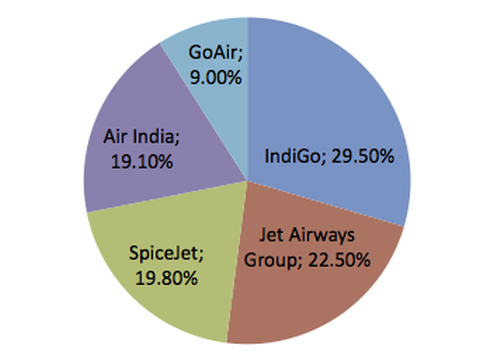 The first start-up scheduled carrier in India in almost seven years is expected to commence operations in the next one to two months. Air Costa plans to operate regional routes from Vijayawada using Embraer E190 jets.

India is expected to sign liberalised bilateral agreements in the next 2-3 months with a number of key markets in the Gulf, such as Dubai, Qatar and Sharjah. The projected increase in entitlements may be less than the foreign carriers would like – unless driven by strategic reason - but are expected to be significant nevertheless. Indian carriers will be asked to submit their seat requirements on these Gulf routes over the next 3-5 years. With the LCCs in particular, perhaps soon to be joined by GoAir, expected to increase their operations to the Gulf, this may allow the government to justify the increased market access provided to Middle East carriers.

The international aviation market from India has been fundamentally changed as a result of the Jet-Etihad deal and further transactions and other strategic development involving Gulf carriers and associated market access will shift the axis completely.

We expect that the Indian government will shortly also approve an amendment to certain bilateral air services agreements e.g. with Dubai and Germany, to permit A380 operations. Currently a number of bilaterals specify the Boeing 747 as the largest permitted aircraft type. As a result we may see Emirates and Lufthansa A380s operating on Indian routes from the Winter 2013/14 schedule.

Government agencies are likely to see a change in leadership

A number of changes are expected in the leadership of key government agencies in the next 2-3 months which could result in a new Civil Aviation Secretary (due to the retirement of the incumbent), Director-General of Civil Aviation and possibly a new Chairman and Managing Director at Air India. There could also be a change of guard at other aviation-related public sector units.

Airports: AAI to invite private operators to bid for management contracts for up to 15 airports, starting with Chennai and Kolkata

The Airports Authority of India plans to invite bids for operations and management contracts at up to 15 of its profitable airports. Chennai and Kolkata, the 3rd and 5th largest airports in India respectively, will be the first two airports off the block, to be followed shortly by Ahmedabad, Guwahati, Jaipur and Lucknow and then a further nine airports.

Expressions of Interest in Chennai and Kolkata are expected to be invited in the next couple of days with Requests for Proposals to be submitted by the end of Sep-13 and concessions awarded by the end of this financial year. 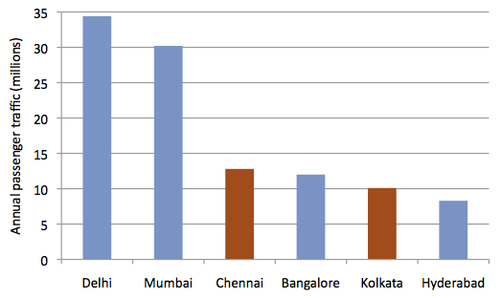 Ancillary Sectors: Indian MROs continue to be challenged by difficult environment and strong competition from overseas

India continues to represent a challenging environment for 3rd party MROs, with high taxation, expensive infrastructure, a shortage of skills and strong competition from neighbouring markets such as Sri Lanka and the UAE. We expect consolidation in the sector in FY14 with one or two acquisitions likely and the possible announcement by the end of this financial year of a new joint venture.

Ground handling: Supreme Court to rule on new  policy on 3-Sep-13 - which could trigger new JVs

The ground handling policy which the Indian government first wanted to introduce in 2007, and which would restrict carriers from self-handling, was legally challenged by the airlines arguing that they would face higher costs and a loss of control over critical customer service functions.

The matter has been in dispute for several years however the Supreme Court has announced that it will hand down a final decision on 3-Sep-13. Following the ruling we expect one or two joint ventures to be formed between Indian LCCs and ground handling firm. We also expect consolidation in the sector in FY14 on both the passenger and cargo sides of the business.

Distribution: Likely changes in ownership of key Online Travel Agencies are expected to create a new dynamic in travel distribution

Among India’s three largest online travel agencies (OTAs) we expect one to see a new promoter and management team take over, while a second is likely to see the induction of a large new investor, creating a new dynamic in the sector.

The realities of the Indian market may also impact the joint venture between AirAsia and Expedia whose territory includes India. Under the partnership Expedia is the sole OTA which has access to AirAsia inventory. However, OTAs play a major role in domestic travel distribution in India and Expedia has a relatively small share of the market.

For AirAsia India to succeed it will likely have to seek an exemption from its exclusivity agreement with Expedia and offer inventory through the three large Indian OTAs, MakeMyTrip, Yatra and Cleartrip.

The coming year to Mar-2014 will be a defining period for the long-term prospects of the Indian aviation market. In this complex environment, having access to up-to-date research and insights into the direction of the market is critical for any business with exposure to Indian aviation. For more information about CAPA India’s research reports - including the recently released 320 page CAPA India Aviation Outlook Report FY14 - click here or contact Binit Somaia on bs@centreforaviation.com

CAPA has a strong and established track record in accurately identifying key trends and developments in the Indian market. We operate India’s leading dedicated aviation advisory and research practice offering unrivalled analysis and data across the value chain. Visit www.capaindia.com