India embarked upon a multi-billion dollar airport modernisation programme in 2005. One of the key pillars of this programme was the introduction of the public-private partnership (PPP) model to upgrade and develop the two primary gateways at Delhi and Mumbai, and to construct greenfield facilities in Bangalore and Hyderabad. Prior to this, all airports in the country, with the exception of Cochin Airport, were operated by the state-owned Airports Authority of India (AAI).

Private capital was attracted to the Indian airport opportunity from two perspectives. Firstly, fast growing passenger and freight traffic, and secondly, there was seen to be significant upside potential in non-aeronautical revenue. In FY2006, the last year in which all metro airports were operated by the AAI, non-aeronautical activities generated just 15.1% of total revenue, compared with around 50% or more being achieved by commercially driven airports in other parts of the world.

The results since then indicate that the optimism about the revenue growth potential was well-placed. In the last five years, total non-aeronautical revenue generated across all airports in the country (excluding Cochin) has grown by more than 340% from INR4.9 billion to INR21.6 billion. The vast majority of this growth (91%) has been driven by the four metro PPP airports at Delhi, Mumbai, Bangalore and Hyderabad. 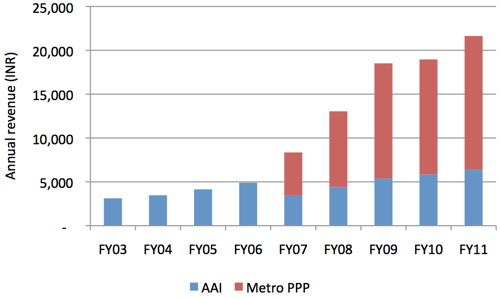 The difference in the commercial approaches of the AAI and the four PPP airports is starkly visible from an analysis of the non-aeronautical share of total revenue. All of the PPP airports have grown their non-aeronautical revenues to at least 35% of total revenue, and more than 45% in the case of Delhi and Hyderabad airports. However, in the case of the AAI it has risen by less than a couple of percentage points over the last five years to reach just 17%. There exists huge but unrealised potential for non-aeronautical revenue growth at the AAI airports, particularly at Chennai and Kolkata. 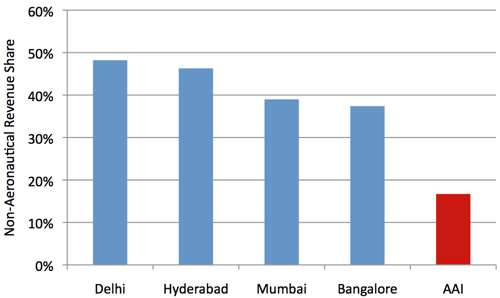 The impressive growth that PPP airports have achieved in non-aeronautical revenue has largely been driven by a focus on developing retail and duty free. International standard retail formats were entirely absent from Indian airports, even the metro gateways, prior to 2006.

India’s airport retail story has therefore unfolded only in the last five years. Retail represents a major addressable opportunity because more Indians are travelling, they are travelling more often and they have more money to spend when they do.

McKinsey forecasts that the size of the Indian middle class will grow from 55 million in 2005 to 256 million in 2015 and 557 million in 2025, by which time it will represent 39% of the population. Total consumption by middle and high income groups is forecast to grow 14 times from INR4 trillion to INR56 trillion over this 20-year period. 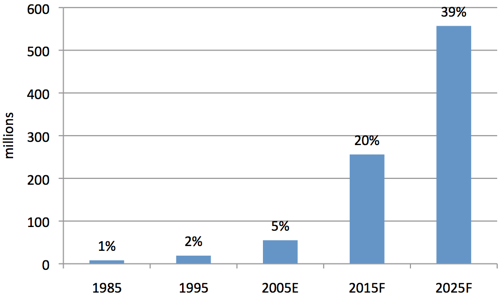 Furthermore, CAPA research has highlighted shopping as the favourite activity of Indian travellers indicating that the retail potential can be exploited by encouraging an existing behaviour rather than having to try and forge new attitudes. Indians have always wanted to shop, but until recently the country’s airports did not present them with an opportunity to spend their money at home.

As PPP airports have introduced more attractive retail environments, with a greater choice of products at competitive prices, passengers have responded. For example, in the five years from 2006 to 2011, international passenger movements at Indian airports increased by 70%, but the sales of whisky grew by 290%, and of other spirits by 660%. 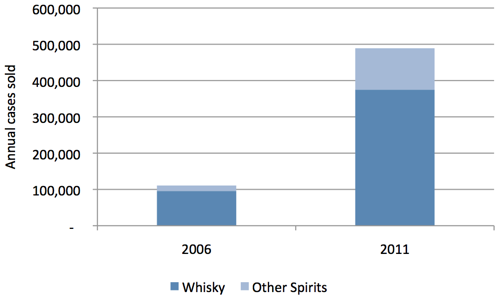 But if airports are to effectively mine this potential, it is important to dig deeper to better understand the Indian consumer. A research based approach to the planning, design and development of retail formats in India will be essential because:

These changes will accelerate over time and the airport retail offer must be flexible as we are only at the beginning of the growth curve. Despite the recent rapid growth, international airport retail in India is estimated to turnover around USD250 million p/a across all airports combined, which compares with close to USD1.5 billion at Dubai Airport alone.

The physical retail environment at airports is improving rapidly and will continue to do so, the onus is now on the retailers and brands to tailor their offer to the tastes of the passenger. As identified below, there are several areas for improvement. But the key overall finding of CAPA’s research is that Indian travellers are willing and keen to spend. However, consumer behaviour is changing rapidly and as a result retail formats cannot be cast in stone and must instead remain dynamic in response to evolving trends.

Some of the key findings of the research included the following:

Whilst retail formats have received attention, to date there has been limited focus and innovation with respect to land and property development, which reflects a further growth opportunity that has not yet been aggressively pursued. Greenfield airports at Hyderabad, Bangalore and Cochin have the largest land banks and the greatest potential to monetise these assets.

Hyderabad has arguably been the most successful in developing a broad range of commercial activities including an airport hotel, an aviation training centre, an MRO, a special economic zone and specialist infrastructure for pharmaceutical shipments. Future plans include the establishment of an entertainment park and a hospital complex to support medical and wellness tourism. Hyderabad has the advantage of a large land bank of up to 1500 acres available for commercial development, compared with just 250 acres at Delhi and 200 acres at Mumbai.

However, in developing commercial and property activities it is important that airports pursue a thoughtful and differentiated strategy with respect to the market segments that they target. If all airports develop similar competing strategies to each develop, for example, an MRO, a training centre and an aerospace manufacturing park, this may lead to overcapacity and may make it challenging to leverage the value in the land banks.

Non-aeronatical revenue will be essential to support investment

CAPA projects that Indian airport traffic will triple to 450 million by 2020 requiring USD30 billion of investment in airport infrastructure. It will be necessary to develop revenue models that will make such investments viable and aeronautical revenue alone will not be sufficient.

Over the last five years, PPP airports have been successful in driving sharp increases in non-aeronautical revenue and the indications are that there remains further growth potential in both retail and commercial activities. With a new commercially focussed approach, the AAI would also be in a position to replicate this growth.

However, in order to maximise non-aeronautical revenue, airports must carefully segment their retail and commercial customer base and develop appropriate strategies for each of them based on extensive research of their complex, differentiated and evolving requirements.

Detailed analysis on the airport retail sector can be found in CAPA’s forthcoming India Travel Retail Report 2012. The report is designed to deliver a comprehensive perspective on the structure and performance of the sector today and the outlook for 2020, combining analysis of the aviation sector, interviews with key industry stakeholders and extensive consumer surveys and focus groups. For more information please download the attached brochure, or contact Binit Somaia on bs@centreforaviation.com.