India's Ministry of Civil Aviation approved the purchase of 46 new aircraft, valued at USD4.1 billion, by SpiceJet, IndiGo and JetLite. In total, Boeing will supply 32 aircraft, while Airbus will supply 14 aircraft. Shares in SpiceJet slipped 0.1% on Friday.

Meanwhile, India's Civil Aviation Minister, Praful Patel, stated the Aviation Ministry has recommended that foreign airlines be allowed to own as much as 25% of domestic carriers, stating: "This is our proposal, but it’s a larger process of decision making within government”. The Indian Government currently does not permit international carriers to have ownership position in local carriers.

Also in the Indian LCC market, Air India Express suspended 203 services to the Gulf due to a shortage of cabin crew, with the suspensions to last until the end of Oct-2010. Suspended services include:

Elsewhere, shares in AirAsia slipped 3.7%, while on the other end of the spectrum, shares in Japanese LCC, Skymark, gained 4.3%.

The carrier added that it plans to handle 10 million passengers in 2010, commenting it "remains on track" to reaching this target. 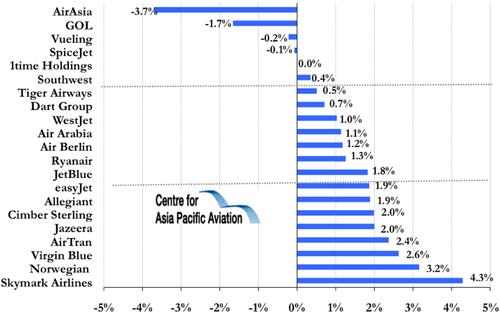