This is the third in a four-part series of extracts from the full 200+ page India Aviation Outlook Report for 2013/14. The first extract looked at the changing dynamics of the airline sector on domestic and international routes, while the second examined the policy vacuum that persists in India and the impact this has on the viability and development of the sector.

This third part addresses key issues in airport and airspace infrastructure, in particular the AAI's challenges in offering management contracts for two of India's major airports and the prospects for regional hub operations - or not.

The next and final extract will consider this year’s outlook for traffic, capacity, yields and airline profitability.

The Airports Authority of India (AAI), the state-owned operator of more than 120 airports, is moving into a critical phase in 2013/14 across all three of its key functions: airport operations, airport development and air navigation services.

This is a landmark year as upgrade projects at the two jewels in AAI’s crown, Chennai and Kolkata airports, have finally been completed after some delays in early 2013. This marks the completion of the modernisation programme across all six metro airports which between them account for 68% of the total traffic handled by the 80 or so Indian airports with scheduled air services. 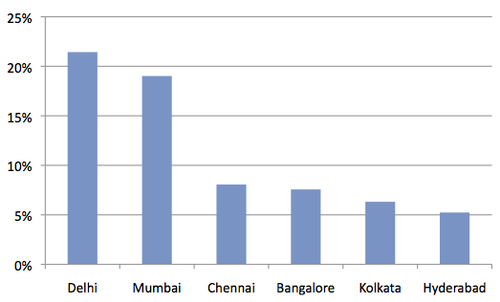 The new terminals at Chennai and Kolkata are of high quality and have been well-received by passengers. Their construction utilised value engineering methods that have helped to contain programme costs which will be welcomed by the industry as an important contribution to moderating increases in charges.

The AAI is planning to invite international airport operators to bid for management contracts for these two airports. This is a good idea in theory however local political considerations may present some hurdles, as could human resource issues since a new operator may seek to reduce employee numbers, a measure which is always fraught with sensitivity. As a result the award of management contracts is unlikely to happen in FY14.

Although the Chennai and Kolkata projects are now complete the AAI continues to lead an aggressive modernisation programme at tens of non-metro airports across the country. Meanwhile demands from state governments for new airport infrastructure continue to increase placing further pressure on the AAI. There is a need to clarify whether the AAI should be responsible for such new airport projects or whether all greenfield ventures should be developed through public-private partnership arrangements. If the AAI is expected to play an active role in airport development then the government must ensure that it is appropriately funded.

The government is keen to encourage the development of low cost airports to enhance connectivity to smaller centres. This is a necessary goal but before this can proceed a viable model must be found for regional airline operations otherwise there will be limited investor interest in such projects. However, as some of these issues are resolved we would expect to see a further push in the airport modernisation programme from 2014 onwards.

The AAI is not only an airport operator but is also the Indian air navigation services provider. Huge investment in technology and training is required in order to upgrade airspace management to enhance the efficiency of current aircraft movements and to support the projected growth of the Indian aviation sector. This requires a fresh and focused approach to funding and governance for the air navigation services division independent from the AAI’s airport operations.

The hiving-off and corporatisation of air navigation services has been on the agenda for some time however this could finally become a reality in FY14. However, the financial impact of this decision on the airports division needs to be considered. We would further recommend that the airport operations be split into two divisions and corporatised themselves, each with independent financials, with one responsible for airport construction and the other for airport management requiring as they do quite different skills sets and funding structures.

India’s satellite-based augmentation system, GAGAN, is expected to launch in 2014 however capacity building and training of controllers will be a key issue during implementation. GAGAN will however make a major contribution to the efficiency of airspace management. Furthermore the recent agreement to allow flexible use of civilian and military airspace is an important milestone and will allow for more direct routings at certain times of the day. However now that it has been approved speedy implementation is vital. Satellite-based navigation and flexible use of airspace are two initiatives which will be very important in reducing airline operating costs and carbon emissions through lower fuel consumption.

The outlook for airport capacity in Mumbai remains a concern. Continued delays with land acquisition for the second airport at Navi Mumbai suggest that the first phase of the project is now unlikely to open before 2018/19, a couple of years after the existing Chhatrapati Shivaji International Airport (CSIA) is expected to saturate. The airport currently operates at close to its maximum runway capacity of around 35 hourly movements for 19 hours a day, between 5am and midnight. The operator has engaged NATS from the UK to develop a plan to improve the airside efficiency of the airport to increase hourly movements to at least 46 and ideally 50, although the latter is likely to be a stretch. 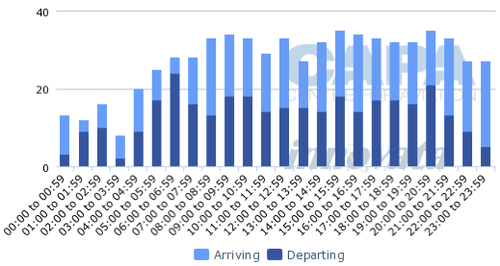 A plan has also been proposed to relieve some pressure at CSIA by shifting general aviation and small regional aircraft to Juhu Airport, which is currently used for helicopter operations. However this is an ambitious undertaking which would require extending the runway into the sea and moving a main road underground. The project faces numerous logistical, political and environmental challenges and CAPA does not expect that it will proceed. In fact CAPA’s most recent research indicates that there is a possibility that the government will close Juhu Airport down in due course to monetise its valuable real estate.

India’s geographic location between Europe, the Middle East, Africa and Asia, combined with its huge domestic market provide it with some of the key building blocks to support the development of aviation hubs. What it has lacked are strong airlines with extensive global networks and efficient and attractive airports. As a result of the airport modernisation programme over the last few years the latter is being addressed and Indian airports have successfully climbed the ranks of global airport quality surveys. But the emergence of a powerful home carrier with global ambitions has proved more challenging.

Air India continues to struggle, Kingfisher has suspended operations and now Jet Airways, the one carrier that had the potential to become a major sixth freedom airline, has entered into a partnership with Etihad that may see its role largely relegated to being that of a feeder to Abu Dhabi airport rather than an Indian one. With this and possibly other upcoming deals, the prospects for Delhi and Mumbai to emerge as the next major global hubs have taken a major step backwards.

Until recently the government, right up to the level of the Prime Minister’s Office, had taken an active interest in the development of airport hubs in India, particularly at Delhi in the North and Chennai in the South. But following the Jet Airways-Etihad deal the statements from the Ministry have shifted to stating that there is no reason for passengers from across India to hub over Delhi if they can do so via Abu Dhabi. This suggests a change of policy that has not been earlier communicated.

If a clear policy roadmap has been established, which was known to all operators and investors, it might have been possible to modernise the airport more cost-effectively, resulting in lower charges for airlines and lower fares for passengers.

The outlook for the ground handling sector, a key element of airport operations, has been uncertain for the last few years as the introduction of the government’s new ground handling policy has remained stuck in the Supreme Court since 2009.

Under the policy proposed by the government, airlines would not be permitted to self-handle at metro airports and would instead have to outsource ground handling to one of up to three authorised handlers. The key driver of the policy was purportedly to enhance security by reducing the number of companies operating at the airport, particularly those providing outsourced manpower.

Airlines protested that this would increase their costs and the outsourcing of terminal handling would diminish their ability to control the service quality of critical customer-facing roles, and the matter went to the courts where it remains. The latest date for a decision is Jul-13. If security was indeed the major concern then this has clearly been compromised for the last four years.

What is emerging is that a compromise agreement may be reached under which airlines are expected to be permitted to self-handle and could also form JVs to offer 3rd party services, subject to a revenue sharing arrangement with the airport operator. Further clarity is required with respect to whether a revenue share would be applicable for an airline JV providing services to the parent airline.

However, providers of outsourced manpower will no longer be permitted at airports and staff would need to be absorbed either by the airlines or the ground handling companies. The introduction of the policy is likely to result in a 20% increase in ground handling costs for Indian carriers. We would expect Indian LCCs to outsource all of their airport operations to 3rd party handlers. However Jet Airways could possibly tie-up with Dnata and bring ground handling for Jet, Etihad and Emirates under one roof.

This analysis is an extract from the keenly anticipated 2013/14 edition of the annual CAPA India Aviation Outlook Report to be released in May 2013.

The coming year will be a defining period for the long-term prospects of the Indian aviation market. In this complex environment, having access to up-to-date research and insights into the direction of the market is critical for any business with exposure to Indian aviation.

CAPA has a strong and established track record in accurately identifying key trends and developments in the Indian market. We operate India’s leading dedicated aviation advisory and research practice offering unrivalled analysis and data across the value chain.