Akureyri, Iceland’s largest city outside the Reykjavik conurbation, has made strides as a tourist centre in recent years. So much so that the state airport operator Isavia has committed to infrastructure works including a terminal extension there, costing over EUR5 million.

But this comes at a time when Isavia is having to encourage airlines to operate there with huge discounts on landing fees.

It is something of a gamble for an operator which, like so many others, has been losing money heavily during the coronavirus pandemic, one that has resulted in the Icelandic government shutting down a country highly dependent on tourism to foreigners, opening it up, and closing it down again.

Late in Dec-2021 Iceland’s Isavia Regional Airports signed an ISK810.5 million (EUR5.5 million) agreement with a local construction company, Hyrna, for an 1100sqm terminal expansion at Akureyri Airport. Construction is scheduled to begin in late Mar-2022 and be completed in early Aug-2023. Two companies, both Icelandic, had bid for the contract on this occasion.

The three-phase project will comprise an extension to the terminal, reconstruction of the arrivals area and rebuilding of the existing check-in and office areas. The expansion will deliver improved facilities for duty free, customs and police, and a new restaurant.

The terminal construction will extend it to 2700sqm.

A tender for the project was previously issued in Jun-2021, with the only bid rejected due to being above budget.

According to the project schedule, the construction work will begin at the end of Mar-2022 and will be completed at the beginning of Aug-2023. The project is divided into three phases. The first concerns a new extension to the terminal. In the second phase, the terminal's current arrival area will be rebuilt and a new check-in area is planned.

As Sigrún Björk Jakobsdóttir, the Managing Director of Isavia Regional Airports, says, this is a large project for Iceland, and one that demonstrates confidence in Isavia that not only can Iceland bounce back from the coronavirus pandemic, but also that the tourist recovery will not be limited to the Reykjavik (capital city) area in the south of the country.

Akureyri is the largest town outside the Greater Reykjavik area, but like most of the remainder of Iceland – Europe’s second largest island – it is isolated from the capital, which is almost 390km away and a five-hour drive. As recently as the 1990s the circular road around Iceland was still a cart track in parts, and travel across the interior is so hazardous as to count as an expedition – even today.

Provision of air services is an economic and social lifeline

Hence the provision of air services is a lifeline for the town; for travel to the financial centre that Reykjavik is, and for onward connection domestically or internationally (although that entails a change of airport as well as aircraft). Occasionally international flights have also operated directly into Akureyri and there is one such service presently. A service to Reykjavik-Keflavik Airport was trialled a few years ago but did not attract sufficient traffic to make it sustainable.

International tourist traffic is still largely concentrated in the summer high season (May to September). Akureyri has not yet built up the number of indoor attractions that Reykjavik can offer during the winter, when outdoor ones can be weather-restricted for accessibility.

Four domestic routes and one international at present

The full route network at the beginning of 2022 is shown on the map below.

There are three domestic routes apart from Reykjavik, including the island of Grimsey, which is the only part of Iceland inside the Arctic Circle (66° North). There is one international route, a leisure one to Tenerife in the Canary Islands. 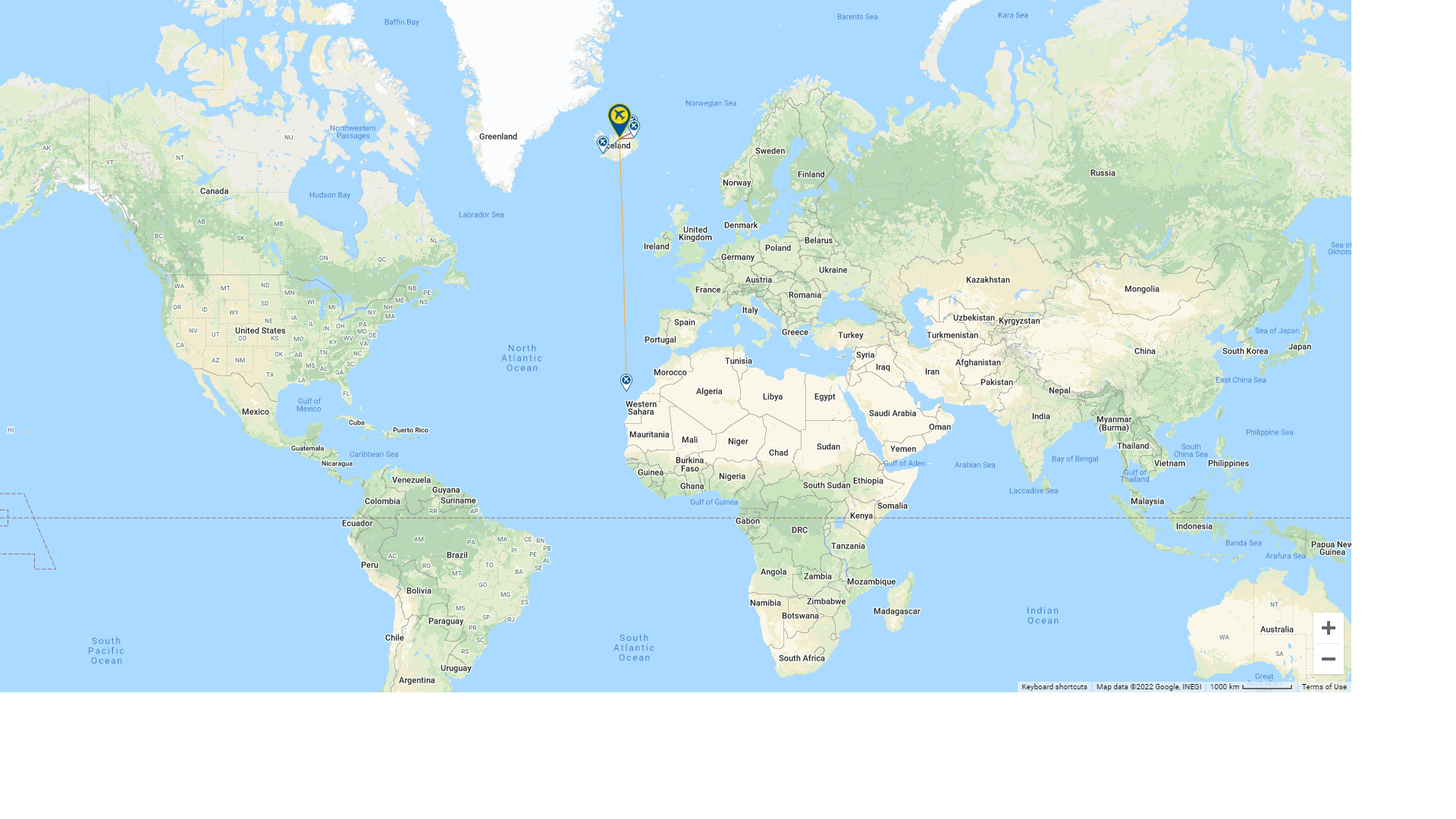 It is informative to contrast traffic growth at Akureyri with that at Reykjavik Keflavik, which is the country’s principal international gateway.

In the immediate aftermath of the Eyjafjallajökul volcanic eruption in 2010 both Icelandic airports were affected, but while Keflavik merely saw its growth diminish (down to +11.7% in 2012), at Akureyri the loss in 2013 amounted to more than 11%.

And although Keflavik’s growth rate subsequently reached 40% and carried on at a high level until 2019 and the collapse of the airline WOW, Akureyri has had as many ‘negative’ years as positive ones since 2013. 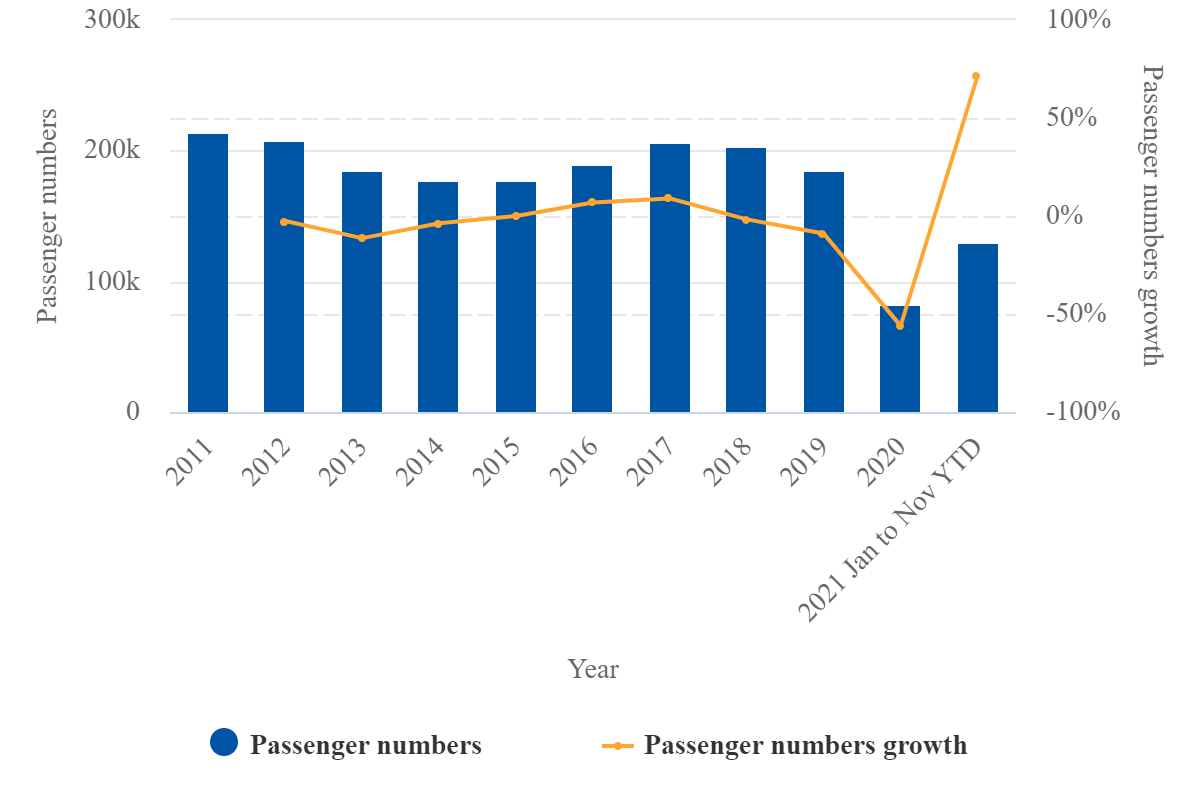 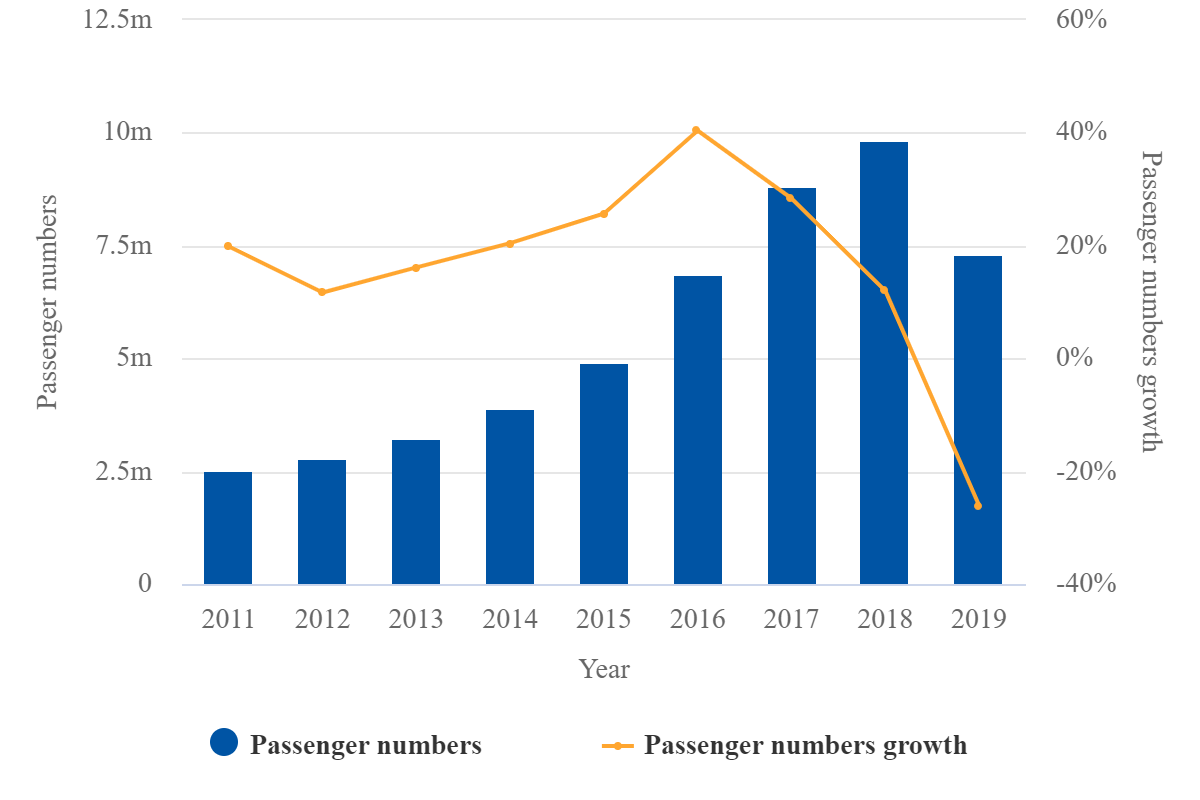 On the other hand, the impact of COVID on capacity at Akureyri was not as severe as it was at Keflavik – at least, not in 2021. The chart below shows that 2021 seat capacity (purple line) actually exceeded the 2019 capacity on numerous occasions from late Sep-2021 and finished the year ahead of 2019.

The projection for 2022 looks promising. That was not the case at Keflavik by any means, but that airport did begin to catch up at the end of 2021. 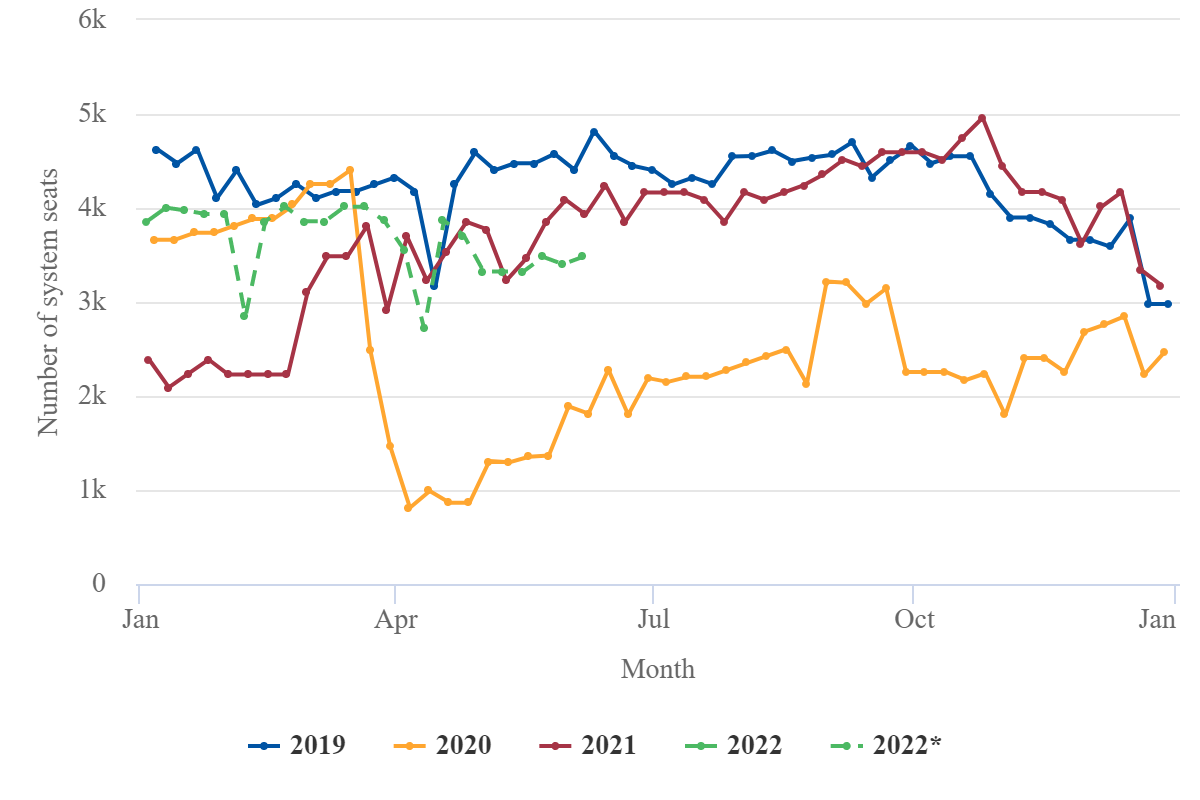 * These values are at least partly predictive up to 6 months from 03-Jan-2022 and may be subject to change.

There is potential for international flights at Akureyri

That recovery is almost entirely in the domestic segment though.

There is – and was – very little international capacity on which to base a comparison. Isavia would, however, point to a summer capacity ‘spike’ in 2019 which saw up to 500 seats available each week from May through to September and a total of 6,500 seats for the year. Isavia’s challenge will be to match that this year.

So far only 366 international seats have been pledged for 2022, which suggests a one-off Canary Islands flight – but at least that is over half of the total for 2021!

The three airlines operating currently are Icelandair, which has 87% of all the capacity, and Norlandair, which is part-owned by Air Greenland and was founded in 2008 out of the Twin Otter operations of what was then Air Iceland (the domestic arm of Icelandair). Completing the trio of operators is the Italian charter airline Neos, which flies the Canary Islands route.

Most activity is crammed into morning and late afternoon ‘commuter’ flights

Operations are patchy at the moment.

The chart below is for Wednesday 05-Jan-2022 and shows that flights are operating in only eight hour blocks. Those in the morning and evening would account for connecting flights from and to Reykjavik that also involve the other three domestic destinations. 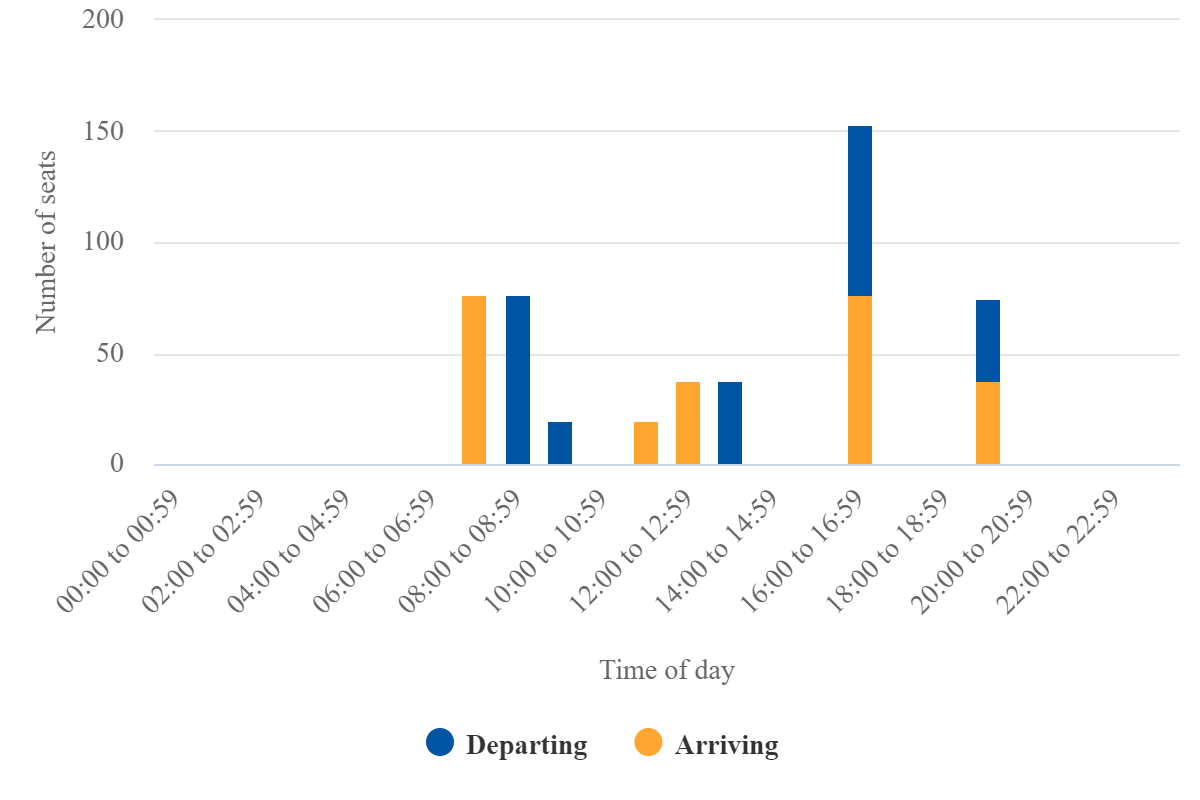 When will tourists return to Iceland in the numbers they did previously?

Akureyri’s prospects will depend on its own ability to attract new services and the overall trend of tourism – whether tourists are allowed to fly into Iceland and to move freely around the country. With a population of only 350,000, and even though the typical Icelander flies abroad six times a year in normal times, inbound passengers will usually outnumber them on most routes.

The Icelandic government was quick to ease entry formalities in 2020 when the first COVID wave abated, but was equally quick to reinstate them almost at the drop of a hat where it saw fit. Most of Iceland’s music festivals for example were cancelled in both 2020 and 2021. They are usually big money earners for the airlines (especially Icelandair) and tourist service providers, such as hotels and tour companies.

With so many of the population (including those in and around Akureyri) highly dependent on tourism, not knowing exactly where the country stands on COVID has become an issue that has impacted those in associated sectors severely.

The chart below shows the big drop in tourist arrivals: from more than two million in 2019 to 486,000 in 2020. The business did rally a little in 2021, to 623,000 (Jan-Nov), but uncertainty continued right until the end of the year, exacerbated by the Omicron variant of the coronavirus. At present, entry is dependent on ‘full vaccination’ and negative tests before arrival, taken at specific periods.

Coupled with the requirements many countries have for the same negative tests to be made before return to the country of origin, there is very little incentive for anyone to visit a country where, at present, there is less than five hours of daylight each day.

It also needs to be borne in mind that many visitors to Iceland historically took ‘stopover’ packages en route between Europe and North America, which would add yet another layer to the testing requirements. The concept of vaccination as a silver bullet for the air transport business has clearly not worked.

The chart below shows overall tourism growth (and subsequent fall) from 2010 (the volcanic eruption which generated enormous disruption in the country and came just before the financial collapse, which made it much cheaper to visit) to 2021. 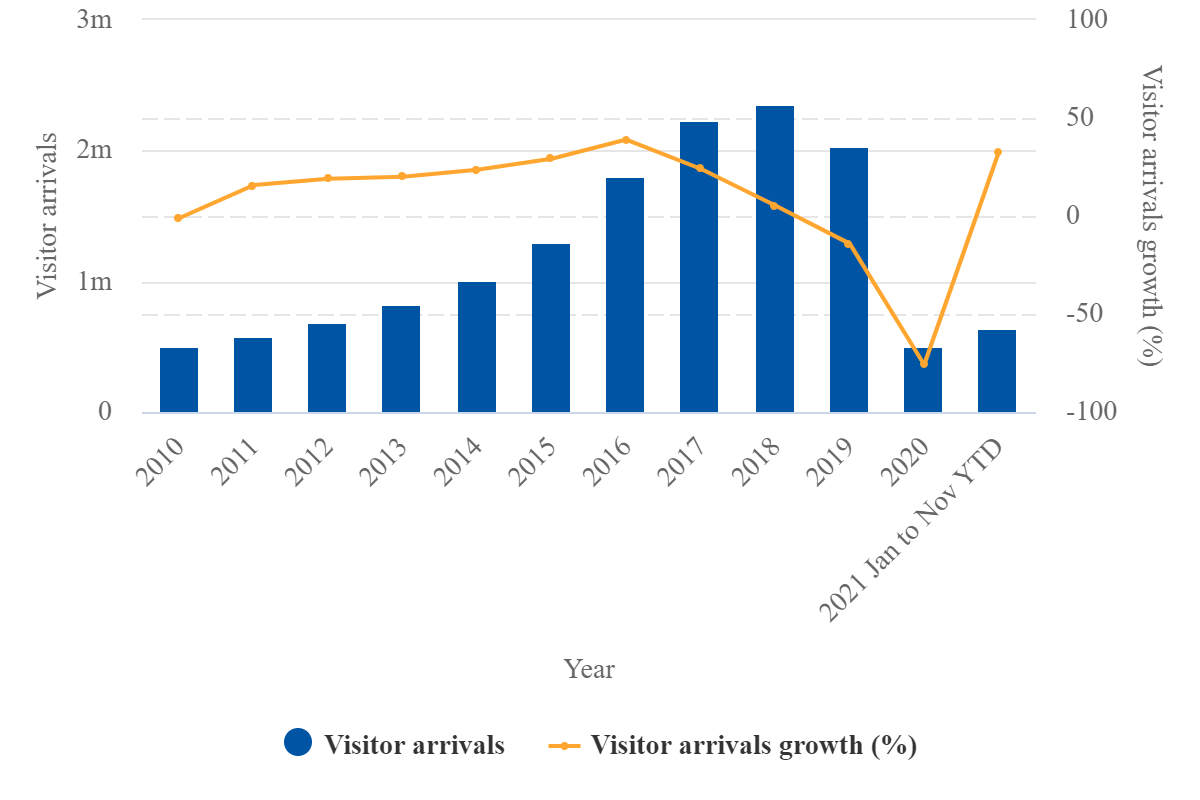 The second tourism chart shows how in 2021, when a recovery of sorts was under way, tourism took on the same ‘peaky’ characteristics’ as it normally does in Iceland, with the peak coming in August. That 'peakiness' has resisted attempts to dissipate it over many years, and the effect of the pandemic has not impacted it in any way. 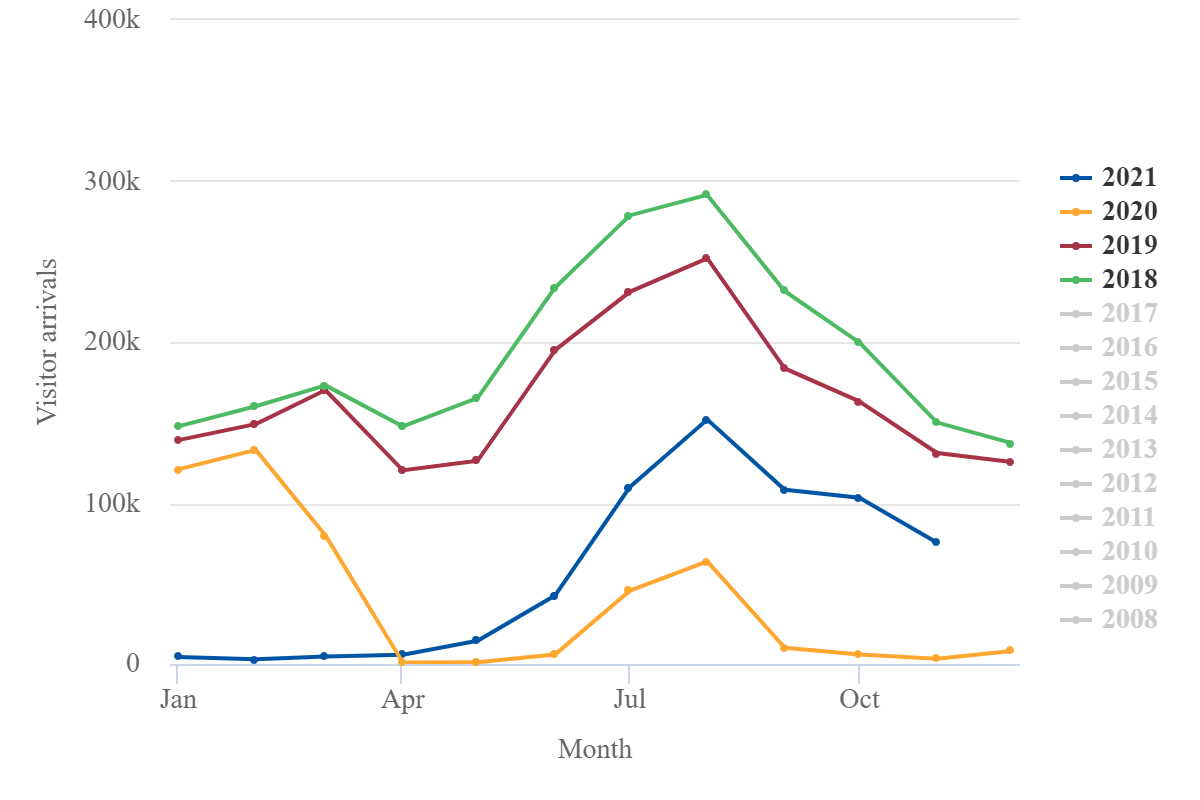 So tourism, or the lack of it, will have an impact on the utilisation of the extended Akureyri Airport.

In Oct-2021 Isavia announced a comprehensive three-year incentive scheme to attract airlines to Akureyri Airport and also Egilsstaðir Airport in the east of the country, with the following breakdown:

Isavia also offers subsidies of EUR25 per arriving passenger, as well as access to a market development fund of EUR60,000.

Essentially Isavia would be paying airlines to operate at these airports. That would not be beneficial to its bottom line but it would be a means to an end.

Isavia reported a EUR85.5 million net loss in FY2020 on revenue of EUR95.2 million. The previous year it had made a net profit of EUR7.77 million.

In its most recent statement, for the six months ended 30-Jun-2021, revenue declined by 27%, to EUR41.4 million, occasioning an EBIT loss of EUR33.8 million, which was little less than in the previous year.

The net loss was EUR23.2 million, more than halving the loss in the previous corresponding period.

So, overall things are improving for Isavia, but even so its faith in Akureyri, spending such an amount on enhanced infrastructure when it is having to give almost a free three-year pass to new airlines to operate there, is quite remarkable; and so Icelandic.

In a country in which you could be swallowed up suddenly in an avalanche or by a volcanic eruption, lose your footing and fall into a glacial crevasse or a powerful waterfall or into a geyser or lava fissure to be boiled like an egg, or just lose your way on a hiking trail and freeze to death (and all of those things happen, every year) – Icelanders have learned to wear optimism like a badge of honour.