Iceland is the fastest growing trans-Atlantic market to the US in 2018 and the country as a whole will have another year of double digit airline seat growth this year. The two Icelandic airlines, Icelandair and the low cost WOW air, both offer Europe-North America connections via the Reykjavik hub. Their current focus on North American growth is helping to balance their network capacity between that region and Europe.

The two airlines are opening up new markets, both on a point-to-point basis and based on one-stop connections between Europe and North America. Among Icelandair's five new US destinations this summer is Kansas City's first non-stop trans Atlantic service. WOW air has added six US airports this summer, including the first European service to St Louis.

Icelandair Group is feeling the pinch after six years of relentless growth by WOW air. The Group is going through a period of transition, characterised by corporate restructuring (including the sale of its hotels division) and slower growth than in recent years (it is cutting capacity to Europe).

However, although point-to-point overlap between Icelandair and WOW air is quite high, the number of overlapping one-stop Europe-North America connections is lower.

According to data from OAG, annual seat capacity to/from Iceland is set to grow by approximately 13% this year to reach a total of 12.1 million.

The country's seat growth in 2018 is slowing relative to recent years. Iceland's five year compound average growth rate (between 2013 and 2018) is 21% pa, led by WOW air's 28% pa. Icelandair Group's five year CAGR is 11% pa, whereas other airlines have collectively grown at 29% pa.

Icelandair and WOW air together have 9.5 million seats out of 12.1 million total

Icelandair Group, the country's biggest operator, is growing at only 4% and will have 5.7 million seats. The fast growing LCC WOW air is expanding capacity at 28% in 2018, when it will have 3.8 million seats.

Other airlines are also growing rapidly, collectively increasing by 13.3% to 2.6 million seats this year.

*The values for 2018 are partly predicted.
Source: CAPA - Centre for Aviation, OAG.

In spite of Icelandair's growth, it has steadily lost market share in recent years as a result of faster growth by WOW air and others.

Iceland: share of annual seat capacity for Icelandair Group and WOW air, 2012 to 2018*

*The values for 2018 are partly predicted.
Source: CAPA - Centre for Aviation, OAG

Iceland's airline schedules are dominated by international routes, which account for 96.9% of seats in the seasonal peak week of 30-Jul-2018.

International capacity is almost all on routes to Europe (59.5% of international seats) and North America (40.0%), together accounting for 99.5% of seats. The fastest growing of these two regions in terms of capacity to/from Iceland has been North America.

WOW air operates to Tel Aviv, the only route from Iceland that is not to Europe or North America. 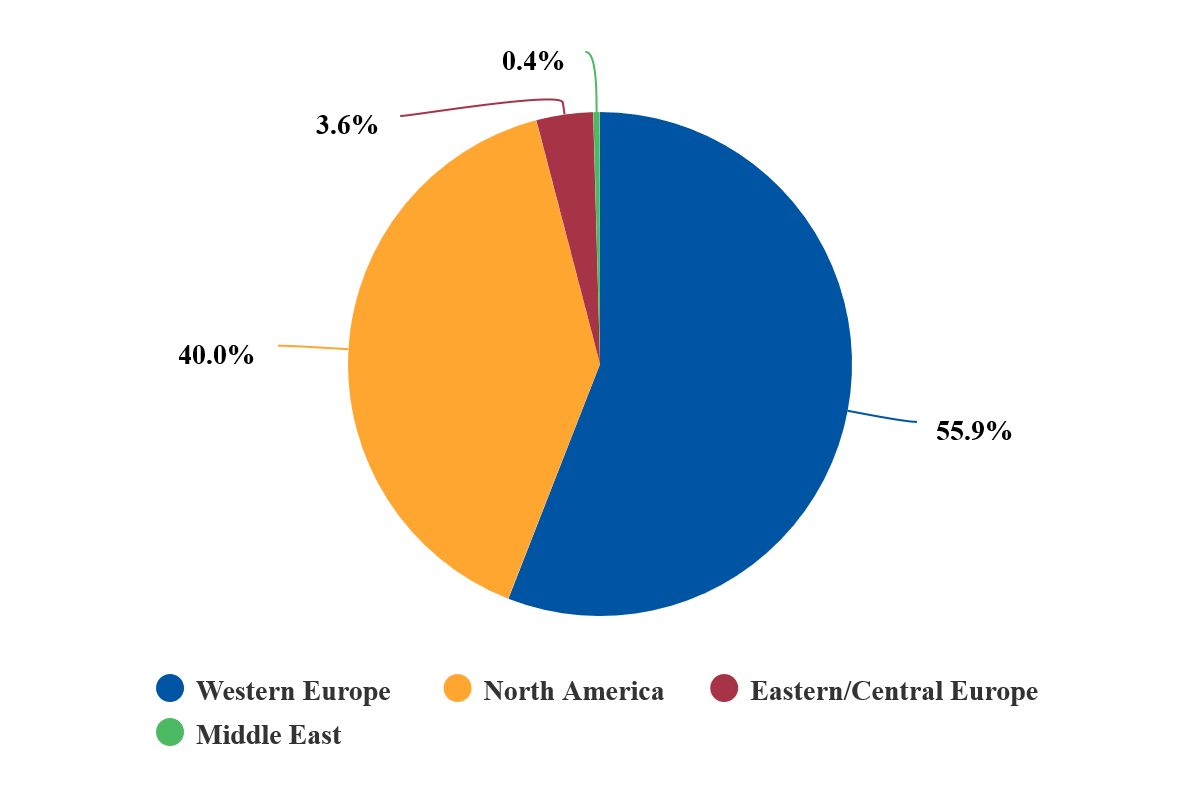 Capacity to Europe has levelled off; Icelandair shrinks as WOW air keeps growing

Seat numbers between Iceland and Europe will be just below flat (a drop of 1% year-on-year) in the week of 30-Jul-2018.

WOW air will increase its seat numbers to Europe by 13%, boosted by the launch of Reykjavik-London Stansted, partly offset by the discontinuation of its Cork and Bristol services.

However, Icelandair's capacity to Europe will be lower by 8%, in spite of new services to Dublin and Berlin Tegel. It has withdrawn from Birmingham, Trondheim, Stavanger and Barcelona.

Wizz Air is growing its capacity (mainly to/from Central Europe) by around two thirds, but remains small by comparison with the two Icelandic carriers. EasyJet's capacity is more focused on the winter schedule, in which it is currently expected to maintain seat numbers at similar levels to last winter.

On a five year view, Iceland-Europe capacity in the peak summer weak will have grown by 58% since 2013, with WOW air's seat numbers up by 175% and Icelandair's up by 37%. 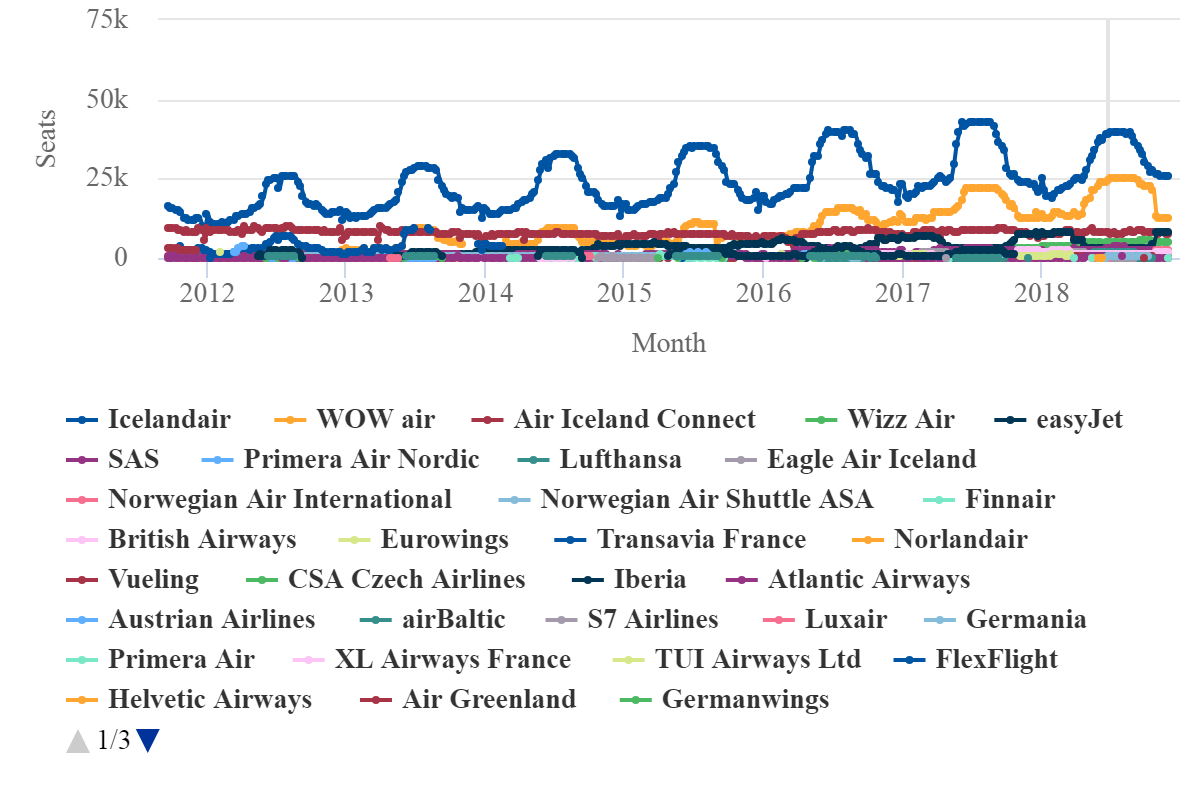 Icelandair (48.9% share of seats in the week of 30-Jul-2018) and WOW air (38.5%) dominate Iceland-North America capacity. Delta has more than doubled capacity since 2013, but has cut seat numbers over the past two years. Air Canada entered in 2017 and American and United entered in 2018, but the two Icelandic carriers drive the market.

Seat numbers between Iceland and North America will grow by 28% year-on-year in the week of 30-Jul-2018, according to data from OAG. Previous CAPA analysis has shown that seat numbers from Iceland to the US are growing faster this year than for any other European country.

By contrast with its capacity cut to Europe, Icelandair is growing by 10% to North America, with new (low frequency) routes to San Francisco, Cleveland, Dallas/Fort Worth, Baltimore/Washington and Kansas City.

However, the Iceland-North America capacity growth is mainly driven by WOW air's 51% expansion. The LCC has new routes this summer to New York JFK, Cincinnati, St Louis, Dallas/Fort Worth, Cleveland and Detroit. These launches are partly offset by the withdrawal of WOW air's Miami service.

WOW air is now the second largest LCC on the North Atlantic, after Norwegian.

In the five years since late Jul-2013, weekly capacity to North America will be up almost threefold. Icelandair has more than doubled (an increase of 128%), and WOW air has grown by a factor of almost 11 times since the equivalent week of summer 2015 (it only launched routes to North America in Mar-2015).

Strong growth to North America since WOW air's 2015 entry has led to both airlines having a closer balance between this region and Europe. 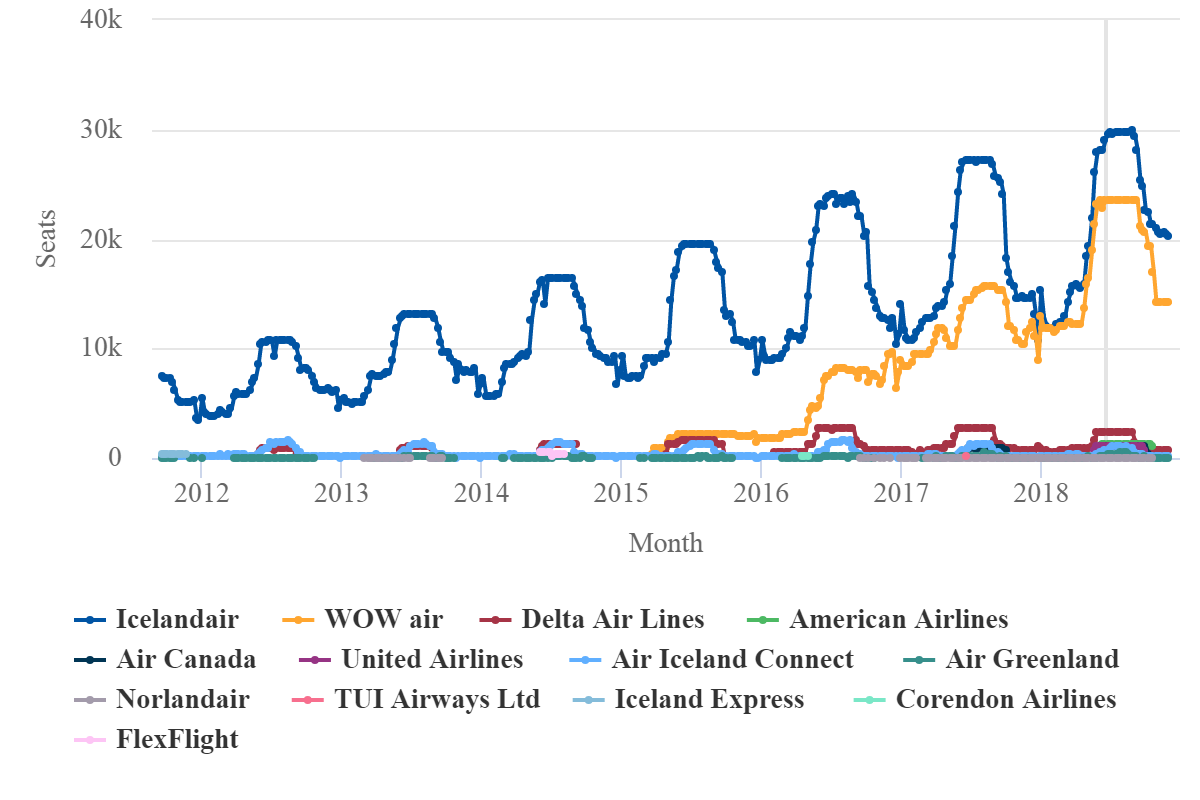 Point-to-point overlap between Icelandair and WOW air is high

Based on analysis of data from OAG for the week of 30-Jul-2018, there is now considerable overlap between Icelandair and WOW air in terms of the destinations served from Reykjavik on a point-to-point basis.

WOW air is exposed to Icelandair on a higher proportion of its network than the other way around, and the exposure of both to the other is higher to North America than to Europe.

The two airlines overlap on 19 routes, out of a total of 60 unique routes operated between them. The 19 routes represent 42% of Icelandair's 45 routes and 56% of WOW air's 34 routes this summer.

Nine of the overlapping routes are to Europe and 10 are to North America.

On routes to Europe, the nine overlapping routes represent 38% of Icelandair's 24 routes and 50% of WOW air's 18 routes.

On routes to North America, the 10 overlapping routes represent 48% of Icelandair's 21 routes and 67% of WOW air's 15 routes.

Icelandair and WOW air: share of each network that overlaps with the other, week of 30-Jul-2018

The chart below shows the seat capacity for each of Icelandair and WOW air from Reykjavik on routes to Europe for the week of 30-Jul-2018. From this, it can be seen that most of the nine overlapping routes are also the bigger routes by seat numbers, led by Copenhagen, Amsterdam, Paris CDG, Frankfurt, Stockholm and Dublin.

The chart also shows that WOW has more of the smaller routes to Europe than Icelandair.

Icelandair and WOW air: seat capacity from Reykjavik on routes to Europe, week of 30-Jul-2018

On routes from Reykjavik to North America, as with Europe, most of the 10 overlapping routes are also the bigger routes, led by Boston, New York Newark, New York JFK, Chicago, San Francisco, Toronto and Baltimore/Washington.

By contrast with routes to Europe, Icelandair has more of the smaller routes to North America than WOW air.

Icelandair and WOW air: seat capacity from Reykjavik on routes to North America, week of 30-Jul-2018

Based on possible one-stop connections between Europe and North America, overlap is lower

Of course, point-to-point routes from Reykjavik are not the only way to look at the overlap between Icelandair and WOW air.

Both airlines operate strategies aimed at using the hub to offer connections between Europe and North America. The overlap is lower when the number of possible one-stop connections is considered.

The number of overlapping airport pairs is 90 (nine in Europe times 10 in North America).

This means that only 18% of Icelandair's Europe-North America one-stop airport pairs overlap with WOW air. For WOW air, the overlap on this basis is 33%.

This analysis does not take into account how well the two airlines' schedules facilitate connections, but it suggests that there is perhaps more scope for both airlines to operate from the same hub than implied by the initial analysis of point-to-point overlap.

Asia is the next battleground for Iceland's dynamic duo

WOW air's progress since its first flight in 2012 has been remarkable. It has undoubtedly stimulated the market in Iceland and pushed Icelandair to respond.

The LCC now looks to be taking the battle to Asia. In May-2018 WOW air announced plans to launch a Delhi service in Dec-2018, targeting US connecting passengers.

WOW air CEO Skúli Mogensen has suggested that the airline could have 14-15 destinations in Asia, as part of an ambition to making Iceland a "Dubai in the north". He has also floated the idea of WOW air hubs outside Iceland.

In a further sign of its ambition, the LCC is known to be considering selling an equity stake to finance further expansion.

Icelandair Group appears to be feeling the competitive impact of WOW air's rapid growth. Its 2017 operating margin fell to 3.5% – from 9.2% in 2016 and 11.9% in 2015, when it had been one of Europe's most profitable airlines. Its 1Q2018 net loss grew to USD34.5 million from USD29.9 million a year earlier, suggesting that its return to better margins may take some time.

Nevertheless, Icelandair continues to plan further network expansion, not least in response to WOW air's growth. It will start a service to Duesseldorf (launched by WOW air in 2017) in the coming winter, and is reportedly considering launching a service to India in 2019.

The year 2018 will be a crucial year for Icelandair as it undergoes its restructuring. If that can be successfully negotiated, the Icelandic aviation market looks set to remain one of dynamic and entrepreneurial development.