Shares in Vueling gained 2.5% yesterday, on reports in El Economista that Vueling’s majority shareholder, Iberia, will put on hold plans for an LCC for domestic and medium-haul sectors.

Talks over combining with British Airways are reportedly the main reason for delaying the project, which was announced in Oct-2009 and previously scheduled to be launched in 2011. Iberia announced in the second half of 2009 that it planned to use Vueling as its response for short haul operations, but then later decided that a wholly-owned subsidiary would instead be necessary.

This raises the intriguing prospect that there have been recent discussions between BA and Iberia of a jointly owned LCC subsidiary. This would not necessarily require the merger to be in place in advance.

Vueling formally combined with clickair to Jul-2009 to become Europe’s fourth largest LCC and is currently tailoring its network to benefit from passengers trading down to LCCs. As Finance Director, Antonio Grau, has said “we think we are capable of capturing a lot of these business travellers who are looking for cheaper ways of travelling". Accordingly, Vueling is also tailoring its network to meet this demand, with the carrier commenting that is the only airline growing on the key business Barcelona-Madrid sector, as the carrier increases its presence in key business markets. 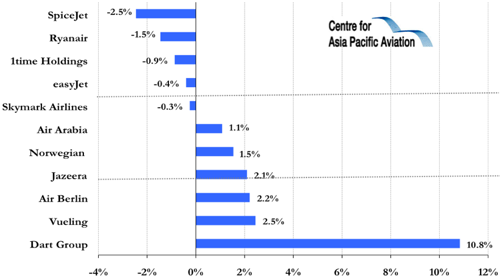