Iberia's 'Plan de Futuro' restructuring restored its profitability in 2014 and it achieved its third straight positive operating result in 2016. Its owner, IAG, rewarded it with a return to capacity growth after years of cuts and new aircraft orders. Iberia's improved returns, and a drop in performance by sister airline Vueling, lifted it from the bottom of the IAG pack in 2016.

Nevertheless, Iberia is still not earning its cost of capital and is some way short of IAG's even higher target return. Iberia's capacity growth is slowing, as it concentrates more on load factor gains in a market characterised by overcapacity. Seat numbers are levelling off in its key long haul market of Latin America, although there is some growth in North America and the 2016 launches of Shanghai and Tokyo routes will feed through to growth in NE Asia this year. In Europe, Iberia is also maintaining flat capacity in the face of rapid LCC expansion.

The second phase of 'Plan de Futuro' targets further margin expansion, but Iberia may have a bigger challenge taking the next step upwards than it did to restore profits. Meanwhile, IAG's growth focus has shifted to its new long haul low cost operator Level.

Iberia's 2016 results showed that it has consolidated the turnaround achieved under IAG ownership.

Its operating result improved by 24% to a profit of EUR271 million compared with EUR219 million in 2015 (note that the originally reported 2015 result of EUR247 million was lowered after an IAG reorganisation that took the Avios loyalty scheme out of Iberia and British Airways to make it a separate business, with no impact on the underlying profitability of the core airline businesses).

The improved operating result was achieved in spite of a 2.4% fall in revenue, so that Iberia's operating margin gained 1.2ppts to 5.9%. The positive result was Iberia's third in a row, after five successive years of losses in the period 2009 to 2013. 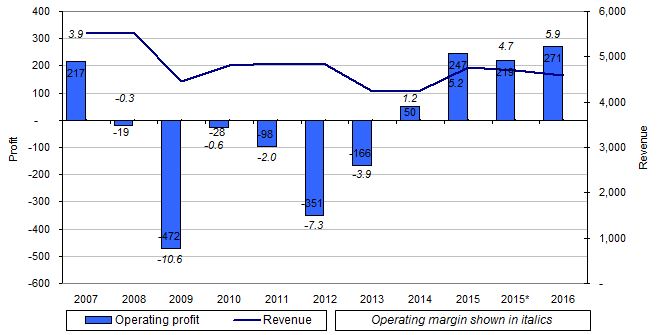 *2015 result restated following an IAG reorganisation that took the Avios loyalty scheme out of Iberia and British Airways to make it a separate business
Source: CAPA – Centre for Aviation, IAG, Iberia

Although Iberia's operating margin improved in 2016, it remained lower than those of its sister airlines British Airways, which achieved a 12.9% margin, and Aer Lingus, which made 13.2%. Moreover, while BA and Aer Lingus made record high margins, Iberia's 5.9% remained below its 1998 peak of 7.9%.

Nevertheless, Vueling's decline in margin to 2.9% (down 5.3ppts) meant that Iberia was no longer the least profitable airline in IAG. 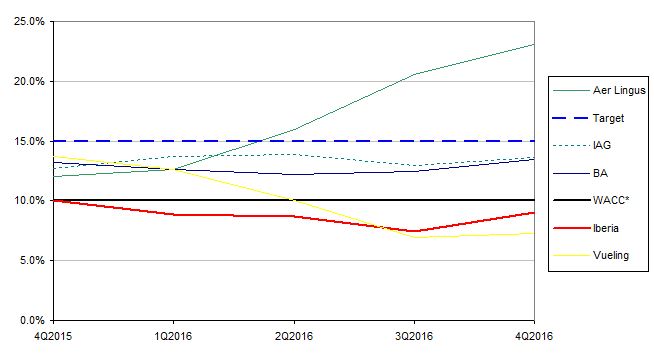 *IAG estimates the group's weighted average cost of capital at 10% and has a target ROIC of 15% for the group and each airline
Source: CAPA - Centre for Aviation, IAG quarterly results presentations for 4Q2016 to 3Q2016

After four successive years of capacity growth, its total ASKs will be 22% higher than their 2013 low point in 2017. However, ASKs will still be 4% below their pre-crisis peak level of 2007, after which Iberia cut capacity by 21% through to 2013. 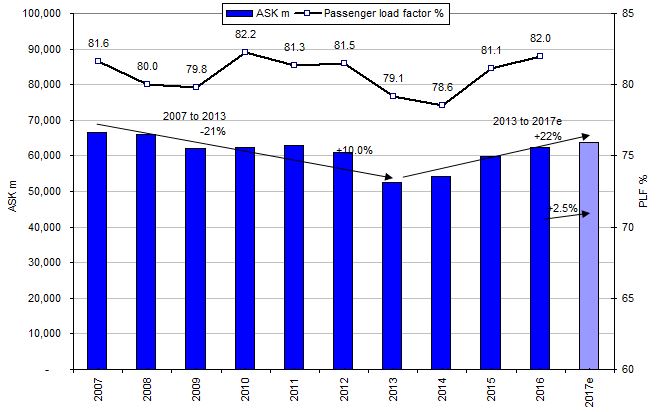 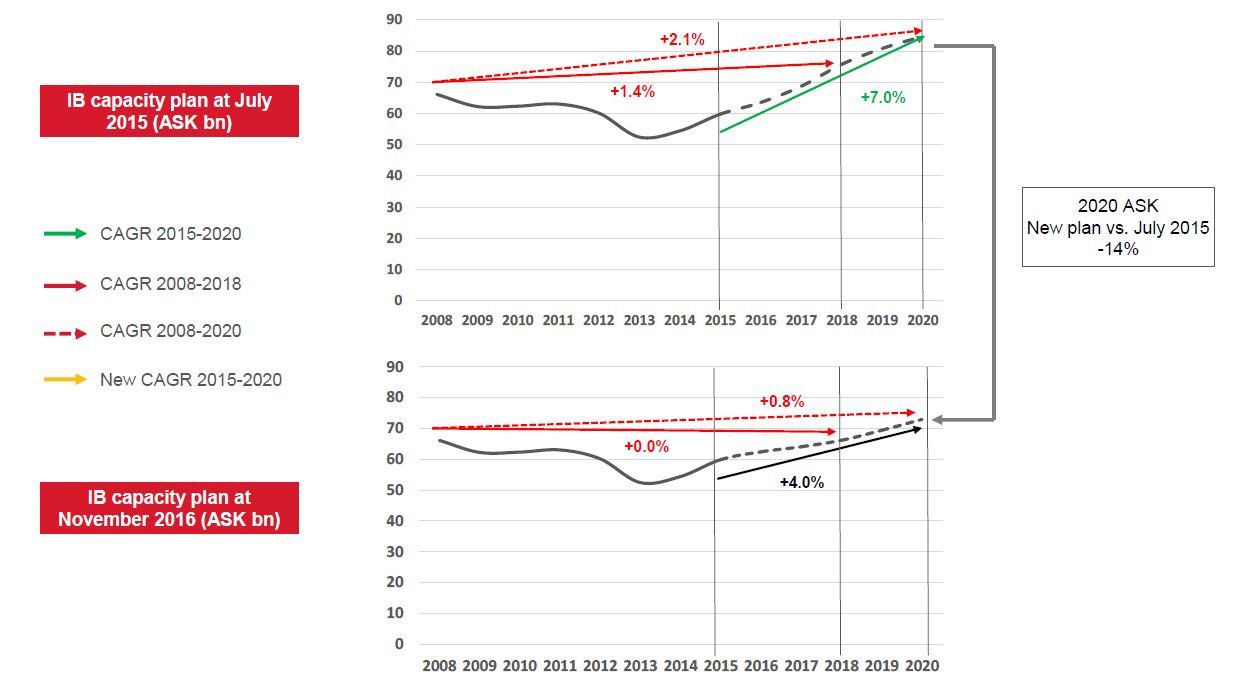 Iberia's load factor declined during its capacity reduction years and dipped further in the first year of its return to growth in 2014, when it bottomed out at 78.6%. However, it increased in each of 2015 and 2016, when it reached 82.0%.

Its load factor is highest on its long haul network (82.7% in 2016), although this was the only region where load factor has not improved sharply since 2014 (it dipped by 0.5ppts in 2016). Domestic and medium haul routes enjoyed load factor gains of around 4ppts in 2016. 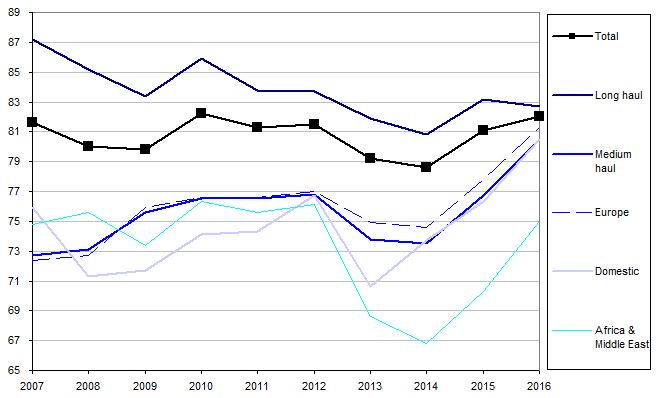 From 2007 to 2013, Iberia's capacity cuts focused more on its short/medium haul network than long haul. International medium haul ASKs fell by 38% during this period, including a 42% cut in Europe, and domestic ASKs were cut by 54%. These are the markets in which LCC competition was most keen and where Iberia struggled to compete.

The more rapid bounce back by Iberia in Europe is partly a mathematical reflection of the greater capacity cut in the years of shrinkage. It also reflects its efforts under IAG to become more competitive, in particular with the launch in 2013 of Iberia Express.

Nevertheless, the past decade has seen Iberia skew the balance of its network, in ASK terms, firmly towards long haul. In the broader context of IAG, Vueling has been able to fulfil the role of short/medium haul point to point operator very successfully, allowing Iberia to focus its domestic and European network more on long haul hub feed. 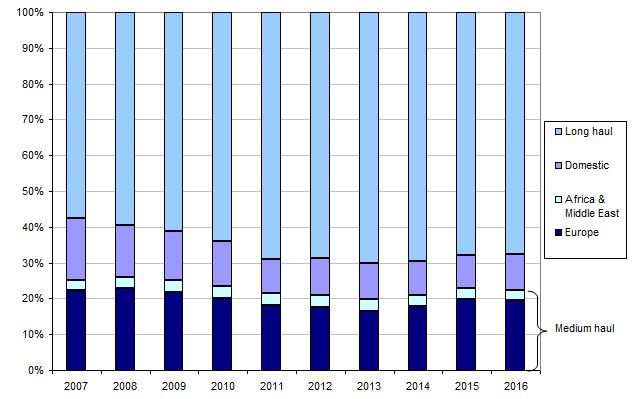 Iberia's own annual traffic reporting does not break down its long haul, but the chart below shows the breakdown of its international ASKs in summer 2017 (based on OAG data for the week of 31-Jul-2017). This highlights the strong westward bias of Iberia's long haul network.

(The balance of its international ASKs is completed by North Africa, Central/Western Africa and Middle East, each with a 1% share). 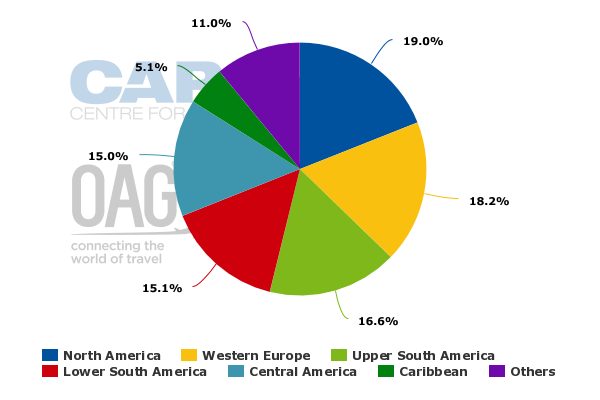 Iberia's long haul network is almost entirely Latin America, North America and North East Asia. The next charts show the development of its weekly seat capacity in these regions since summer 2014.

However, having returned to growth on Latin American routes in 2014 and 2015, Iberia's capacity was more stable in 2016, while its main Spanish rival Air Europa has continued to grow. Iberia is pausing as a result of a soft LatAm macro environment and remains cautious even as Brazil's outlook is improving.

Iberia hopes that its new premium economy product, to be launched in May-2017, will help to differentiate it from competitors and, presumably, drive further traffic growth through load factor gains in its long haul network.

According to data from OAG, Iberia's weekly seat capacity to Latin America in the week of 31-Jul-2017 will be only 1% higher than it was two years previously, whereas Air Europa will have increased its seat numbers by 22%. 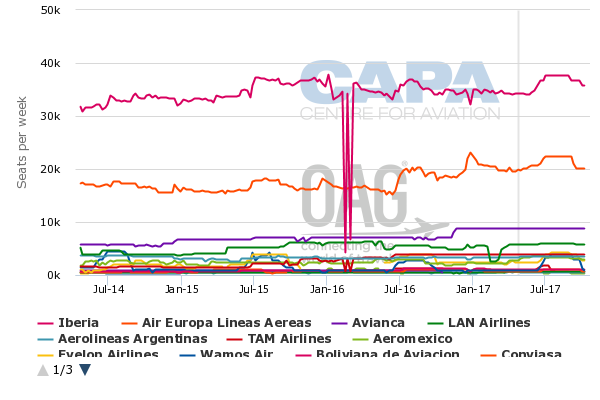 With little growth on routes to Latin America, Iberia's overall long haul growth slowed in 2016, when long haul ASKs were up by 3.7%, after a 7.7% increase in 2015. What growth there was in 2016 was driven by expansion in North America and the return to North East Asia.

On Spain-North America, Iberia's weekly seat capacity more or less tracks that of its oneworld JV partner American Airlines. In the week of 31-Jul-2017, both will have around 10% more seats than in the same week a year earlier and 17% more than in the same week of 2015. They are each roughly twice the size of the nearest rival on Spain-North America, Delta, which is reducing capacity this summer.

Iberia's North America growth this year reflects the first full year of its new Madrid-San Juan route, launched in May-2016. 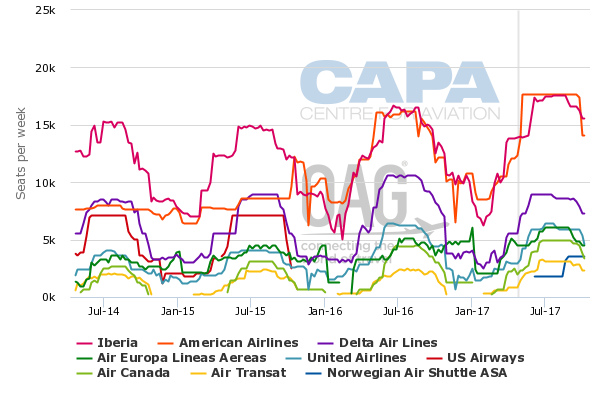 See related report: Iberia to launch Tokyo & Shanghai in Asia return after many years. Another sign of approval from IAG

Iberia's capacity will remain flat, while growth this summer by oneworld's Cathay Pacific (with the launch of Hong Kong-Barcelona) and Air China (launch of Shanghai-Barcelona and increased capacity on Beijing-Madrid) will push Iberia into third place on Spain-North East Asia. 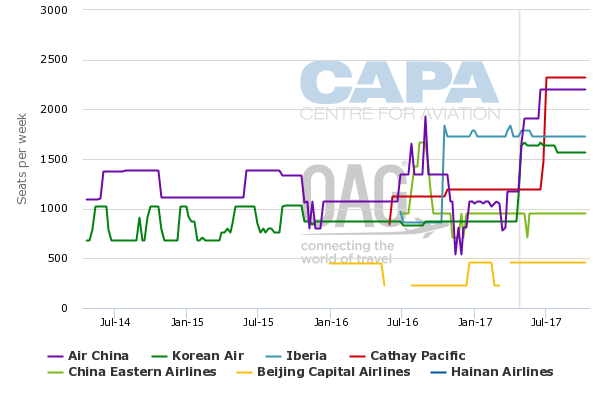 Spain-Europe: Iberia's post restructuring return to growth has levelled out

Iberia's post restructuring return to growth on routes to Europe mainly took place in 2014 and 2015, but slowed considerably in 2016. During its restructuring years, rapid growth by Ryanair, Vueling and easyJet overtook it in terms of seat numbers and, in spite of the return to growth, it is only the number four airline by seats on routes between Spain and Europe.

OAG data for the last week of July show seat growth of 5% in summer 2016, compared with 20% in 2015. Data for the week of 31-Jul-2017 indicate a 1% cut in seat numbers for Iberia on routes between Spain and Europe (not that Iberia Express is included in these data).

The Spain-Europe market overall has received significant increases in capacity over the past two years as a result of a number of (mainly leisure) non-Spanish airlines' switching of capacity away from geopolitical hotspots in the Eastern Mediterranean. 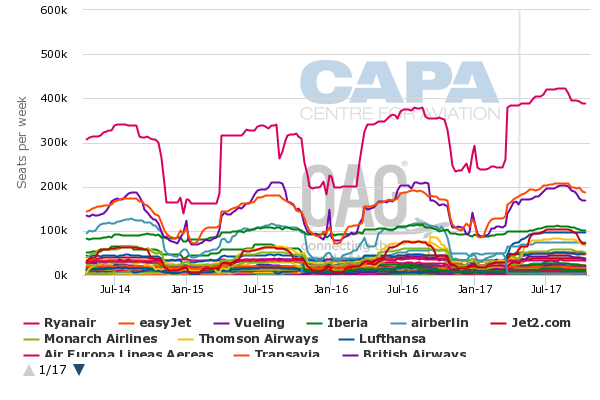 Ranked by total seat numbers (based on OAG data for the week of 31-Jul-2017), Iberia is the number three airline in Spain, with 10% of seats compared with 17% for leader Ryanair and 13% for number two ranked Vueling.

Among Western Europe's larger nations, this gives Iberia the weakest share for a 'flag carrier' in its own country. Using OAG data for the week of 31-Jul-2017, BA is number one in the UK, with 17% of total seats; Lufthansa is number one in Germany, with 29%; Air France is number one in France, with 27%; and Alitalia is number two in Italy, with 15% (behind Ryanair on 22%).

Iberia's challenge is to take the next step up

Market share is by no means all important, particularly in markets where there is overcapacity, and Iberia's share in Spain must also be viewed at least partly in conjunction with fellow IAG airline Vueling's share.

Moreover, most of the bigger competitors in Spain are short/medium haul specialists, while Iberia's greater strength is long haul.

On the other hand, long haul requires feed from short/medium haul and the main long haul competitor to Iberia in Spain (Air Europa) is growing faster than it currently.

It is early days in the development of Level, but IAG has in the past explicitly linked Iberia's growth to its meeting financial performance targets and it may not be a coincidence that Level's launch comes when Iberia's growth is slowing.

The waves of restructuring and capacity cuts by Iberia, which began with the global financial crisis in 2008 and continued under IAG ownership from 2011 to 2013, certainly led to the restoration of profitability. This was in no small measure due to improved cost efficiency and labour productivity and Iberia still has solid targets for further labour CASK reduction (a 34% cut in 2021 versus 2012).

However, in a year of historically low fuel prices and when at least two of its IAG sister airlines made record margins, Iberia's shortfall to IAG's ROIC targets suggests that it will need to find more from somewhere.

The second phase of its 'Plan de Futuro' targets improved labour productivity (a new early retirement programme is also under consideration) and lower supplier costs. Iberia will also renew the bulk of its long haul fleet by 2020 (replacing A340s with A330s and A350s).

Nevertheless, with its crisis years behind it and Iberia reaching a plateau of mediocre profitability, the challenge will be to find a way to take the next step upwards.