IATA’s latest financial health monitor shows that airlines improved their financial performance in 3Q2009, although the recovery varies by region and European carriers are still lagging behind. A sample of 75 airlines conducted by IATA showed a net profit of USD750 million during the third quarter, compared to a net loss of USD3.4 billion in the same period in 2008.

Passenger and freight volumes are now coming back towards pre-recession levels, but only half of traffic decline witnessed over 2008 has been recovered so far.

Even with recovering traffic, the tough times are not over. Passenger yields, although up from their mid-year low, are still contracting. IATA reports that premium fares were down by 15% year-on-year in Aug-2009, a “significant improvement” over levels earlier in the year, when yield falls were topping 25%. Economy fares are also recovering, although competition “remains intense”, with many LCCs still pursuing an expansionist trajectory.

A structural change in the premium market

The concern now is that there has been a fundamental restructuring in premium travel market, with changes to travel purchasing and usage patterns.

The perceived recovery in premium travel volumes has recently “encountered an area of turbulence”. Premium volumes contracted 13.9% year-on-year in Sep-2009, a deterioration from the 12% reduction seen in Aug-2009. 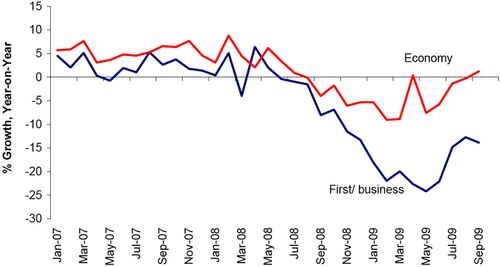 Much of this was due to the still weak economic conditions in North America and Europe. The intra-European and North Atlantic markets dominate international premium travel, accounting for approximately 45% of traffic by volume and nearly 40% of revenue.

The growth picture varies; by comparison to the slower traffic in the developed world, developing markets are showing increasing levels of improvement. Most markets connected with the Middle East are also showing growth in premium travel levels (as the region continues to increase its long-haul market share), as are markets connect to Latin America. African and Asian premium travel markets remain more mixed.

Cyclical pressures are expected to slowly pull yields back from their depressed levels. Airlines continue to reduce capacity, although at lower levels than in 2009. The capacity cuts in 2009 appear lower in the year-on-year comparison, but this is partly due to the major reductions in 2008 against which they are measured. 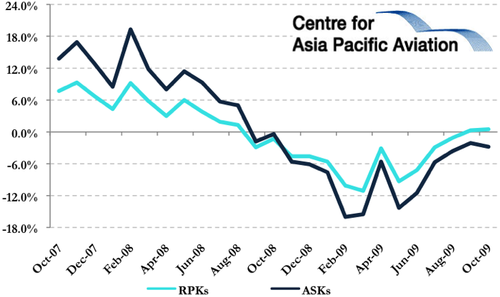 Lower fares and cuts to capacity have pushed load factors to an “all time high” according to IATA.

However, the high load factors have not been accompanied by higher aircraft utilisation, with both narrowbody and widebody utilisation down 6% from early 2008 levels.

In the downturn, airlines have several choices in adjusting capacity. Bringing forward retirements is the easiest, then parking more current aircraft, which can be more painful; but flying more slowly, reducing utiilisation around the margins are all used to avoid having too many seats in the air. Consequently, in most markets, utiilsation has dropped quietly, disguising the real levels of excess capacity. This helps keep aircraft full and in turn squeeze yields upwards, but it has implications for unit cost, as the capital asset is being underutilised.

As a result there is a large amount of "potential capacity" which can be returned to the market at marginal cost - the airlines' favourite way of flying! The good side to this is that new growth can be easily absorbed in an upturn; the less good is that there is a buffer of capacity which can quickly be reintroduced if a carrier sees a need to restore market share - thereby diluting the potential to improve yields

With a massive backlog of orders, airlines continue to build their fleets, with more than 100 new aircraft delivered in Oct-2009 and just 40 aircraft taken out of service and stored. The international aircraft fleet has expanded by better than 2% in 2009, despite the overall reduction in ASKs this year of 1.7%. The fleet expansions in some cases are unwelcome but necessary, as ordered aircraft are deferred or cancelled only at considerable expense. 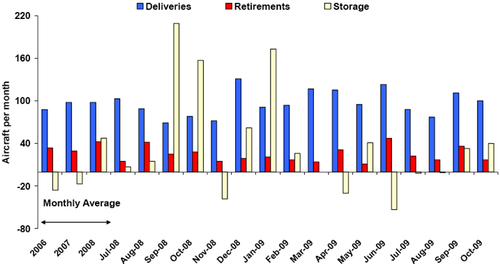 Similar growth looks set to continue through 2009, with both Airbus and Boeing aiming to maintain production and delivery levels despite aircraft deferrals and order cancellations. Smaller manufacturers Bombardier and Embraer are cutting back production, particularly of their lower size models.

Between them, Airbus and Boeing have reported 139 order cancellations between them this year. Deferrals are also a major concern: US Airways recently deferred 54 Airbus orders, while Malaysia Airlines has pushed back its A380 deliveries.

Airline equity values are continuing to climb and airlines are adding to their capital reserves. According to IATA, airlines have added USD2.5 billion cash since late Nov-2009, mostly through debt. This builds on the USD8 billion that airlines had raised over the previous two months.

Airlines have now built more than USD25 billion in new equity and debt this year. The cash raising eases some concerns that carrier’s had been unable to build sufficient operating reserves during the peak Northern Summer period, potentially resulting in another wave of bankruptcies and collapses.